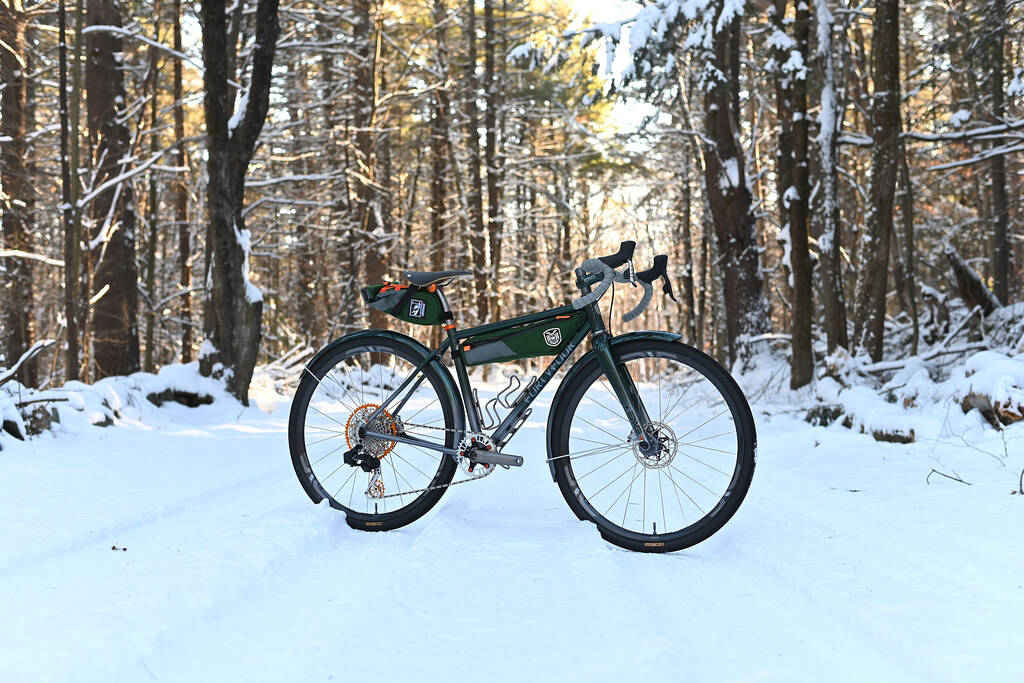 Have I got a story for you, my humble readers. No, I’ve not been writing for a good while, but that’s another story and I’ll explain in a separate post. So back in early 2020 I delivered a bike to a client out in San Francisco. Ron was stoked and immediately started putting a lot of miles on his new bike. He was happy and I was happy for him. I didn’t hear from Ron for most of 2020 until early 2021 and it wasn’t the news I wanted to hear: His bike had been stolen. Bike theft sucks. The Pandemic was raging and bike theft was ballooning. But just a few short weeks before this all happened, another client had gotten their bike stolen too. In San Francisco ironically. So now I’m two for two in San Fran. But I had put up a post on the 44HQ Instagram account and the previous bike had been recovered by a set of steely eyed eyeballs down in Mexico of all places. Long story short, I figured if that worked once before and we recovered that bike, why not try the same for Ron’s? So I put up a post, gave a description of what the bike looked like when last it was ridden and hoped for the best. Here’s what the bike looked like when it was last ridden with the exception of a different pair of tires:

A handful of weeks passed with no signs of Ron’s steed. Then, one afternoon I received a PM via Instagram: Another user, who doesn’t follow me, but happened to see my post by chance, had spotted Ron’s Huntsman at a 7 Eleven in down town San Fran. It was rattle canned black, but he said otherwise the bike fit the exact parts spec I had given. He forwarded a photo and geo tagged it’s last location on Google Maps. I immediately got on the horn with Ron: His bike was spotted only a few blocks from his house. The next email I got was simply this photo: 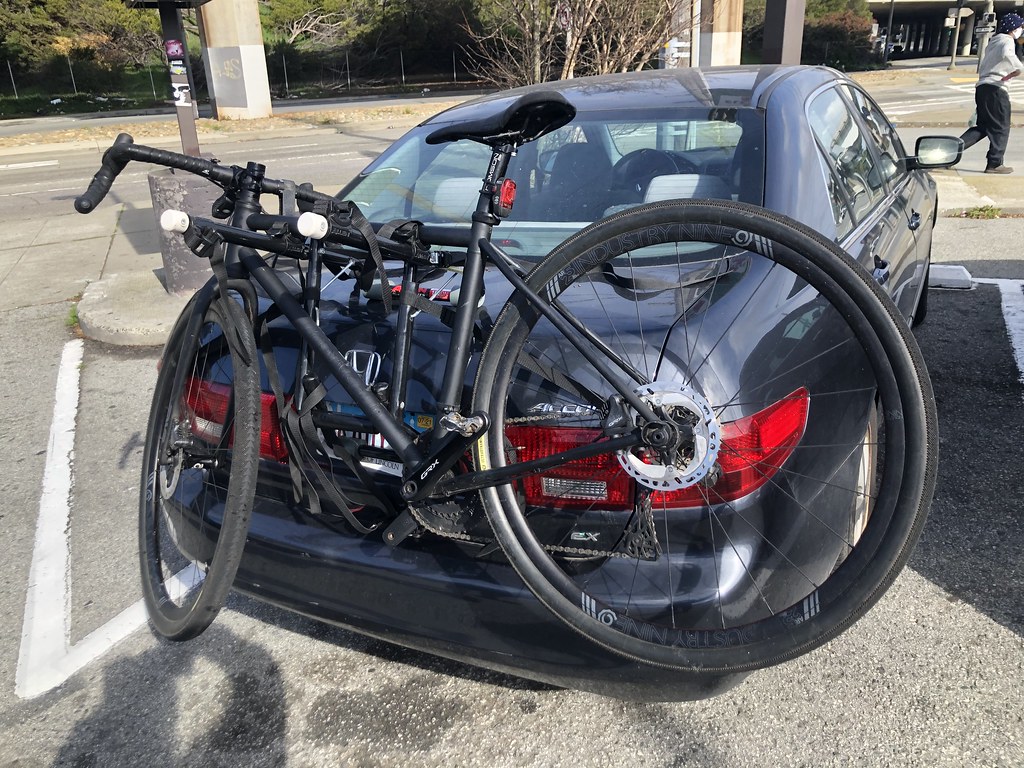 YAS!! Ron recovered his bike!? That’s now 2 for 2 in San Fran for bikes stolen AND recovered. I got back on the horn with Ron and he gave me the low-down: Earlier that summer, he had gotten a speeding ticket on that bike in Northern California and the day I sent him that email about his bike being spotted, he had to be on a Zoom meeting with a judge in N. California to see if he could get the infraction waved or the fine lowered in an hour. So he gets through his court meeting via Zoom, calls up his buddies and they go down town to see if they could find anything out from the 7-Eleven staff. A quick conversation and apparently the thief frequented that 7-Eleven daily. The kind IG user had apparently been on a bike ride with a buddy, spotted the bike and had a conversation with the perpetrator who, according to his description, was wearing a long steak knife on his belt… They were trying to see if they could buy the bike off of him but he wouldn’t budge. However, he asked them “Hey, do you guys know anything about this bike? It stopped shifting!?” It was Di2 so the battery must have run dry. So Ron and his buddies head outside and scope out the situation. Across the way was an overpass and immediately they spotted a giant pile of bikes in a tent city beneath the underpass. Most likely a chop-shop. So they called up the police while Ron scrambled up and over the overpass and landed on the opposite side of a chain link fence. Right up against the fence on the other side? Ron’s Huntsman! By this time, the Police had arrived and asked if Ron could prove it was his bike. Well, all of my bikes come with a lucky number on the Seat Tube badge and sure enough, it was still there. Lucky No. 57. With the bike recovered, Ron spotted someone in a tent close by and asked him “Hey, there was a tool bag on this bike, you don’t happen to have it do you?” The guy in the tent replied “Sure, it’s right here” and handed him back his tool bag. From here, the bike was packed up and return to 44HQ for some small repairs (the thiefs had decided to remove the seat tube water bottle bosses) and a bunch of additions. Here’s what the bike looked like upon it’s return: 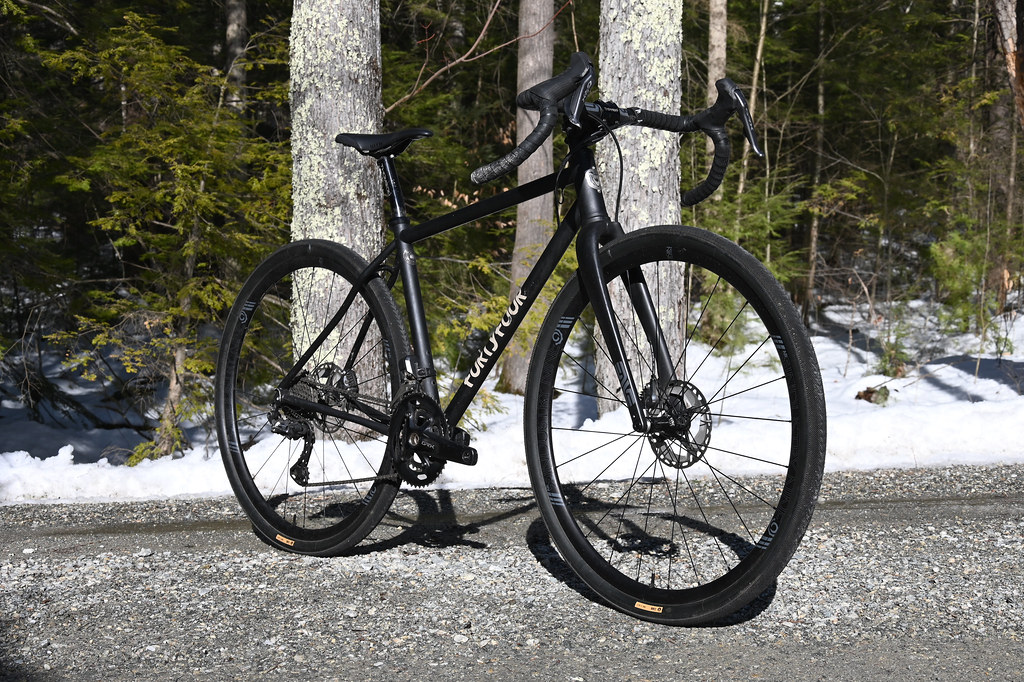 Not too bad, but not too good. I proceeded to disassemble the bike, get the frame stripped, make repairs and prep it for it’s journey down to Shirley, Ma for some Hot Tubes paint work. Here it is all mocked up with its new fenders and amenities which included more bottle mounts, a TT gas tank integrated mount, rear rack mounts and integrated frame bag mounts: 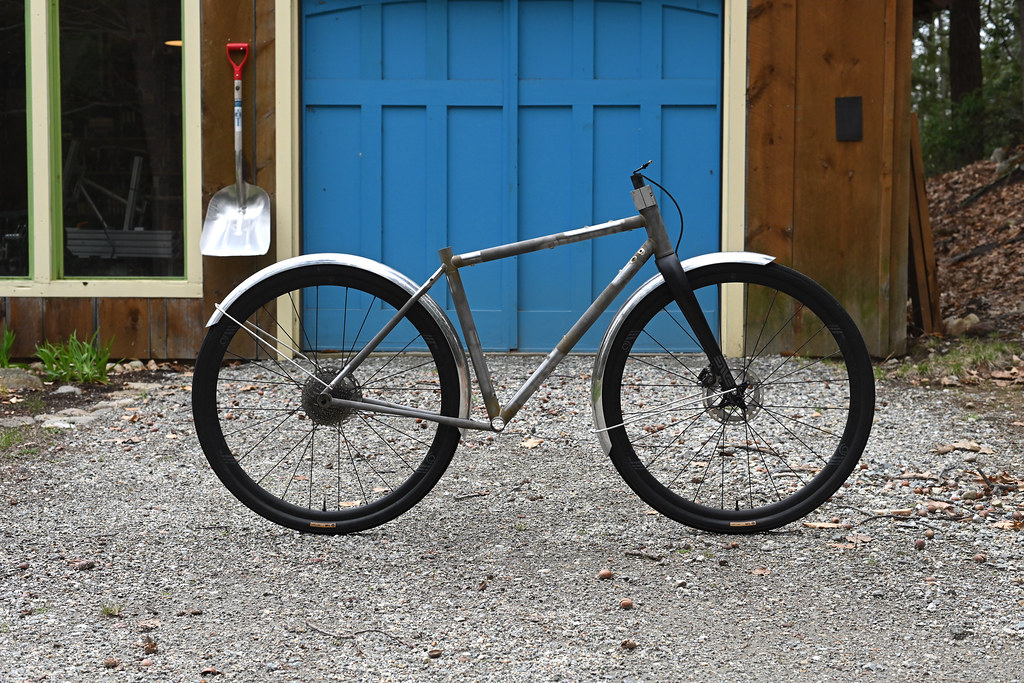 And then the wait began while Ron and I amassed all the parts necessary for the bike to be reinvented. And here’s the result: 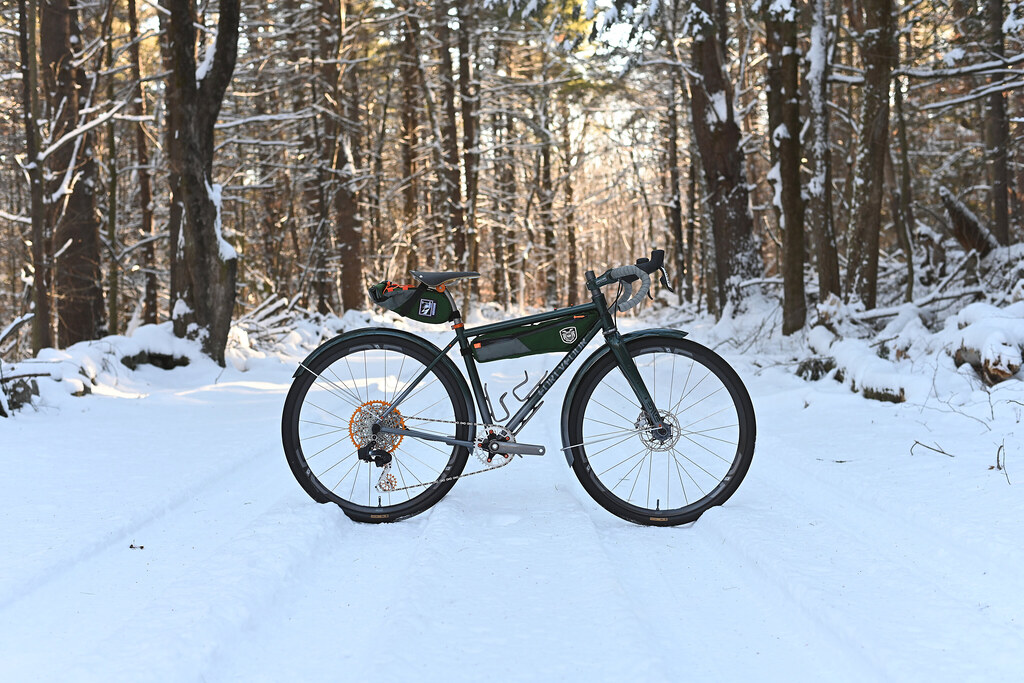 Bobbed fenders complete with matching fade across the fork, frame and fenders: 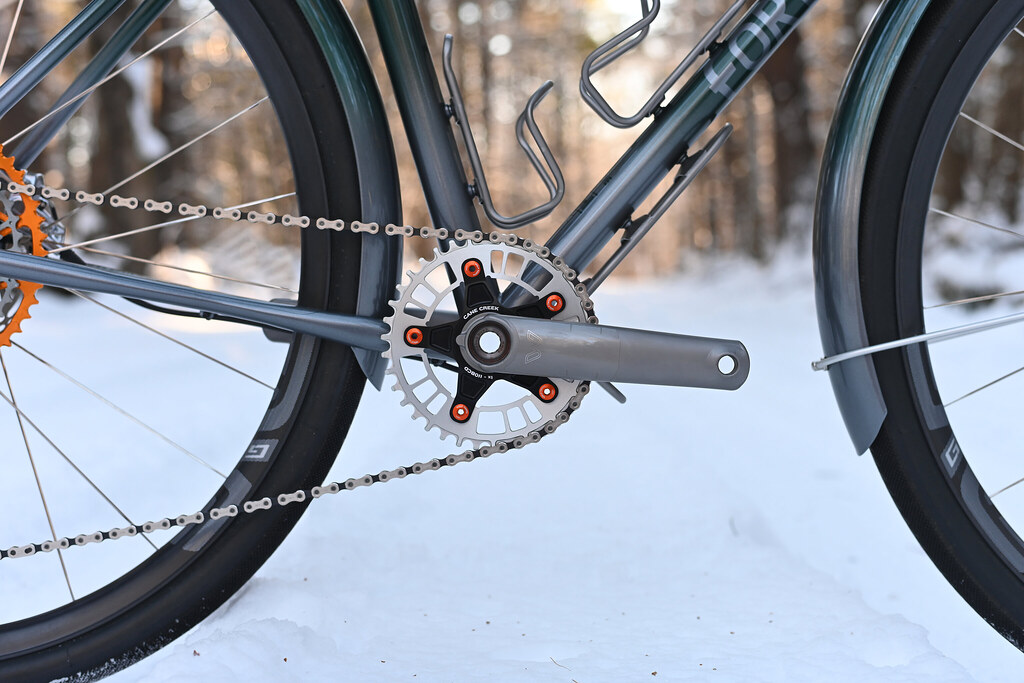 Ron didn’t skimp on this one either. Lots of cool parts from the Cane Creek eeWings, to the Garbaruk cassette and new cage/pulley assembly to get a massive range out of Sram’s Red AXS 1x group. We swapped over to AXS because running a 30mm crank with a traditional BSA bottom bracket wasn’t jiving with the Di2 wires – I would have built the bike with a T47 if I knew the bike was going to run a 30mm spindle but this helped eliminate all the wires. 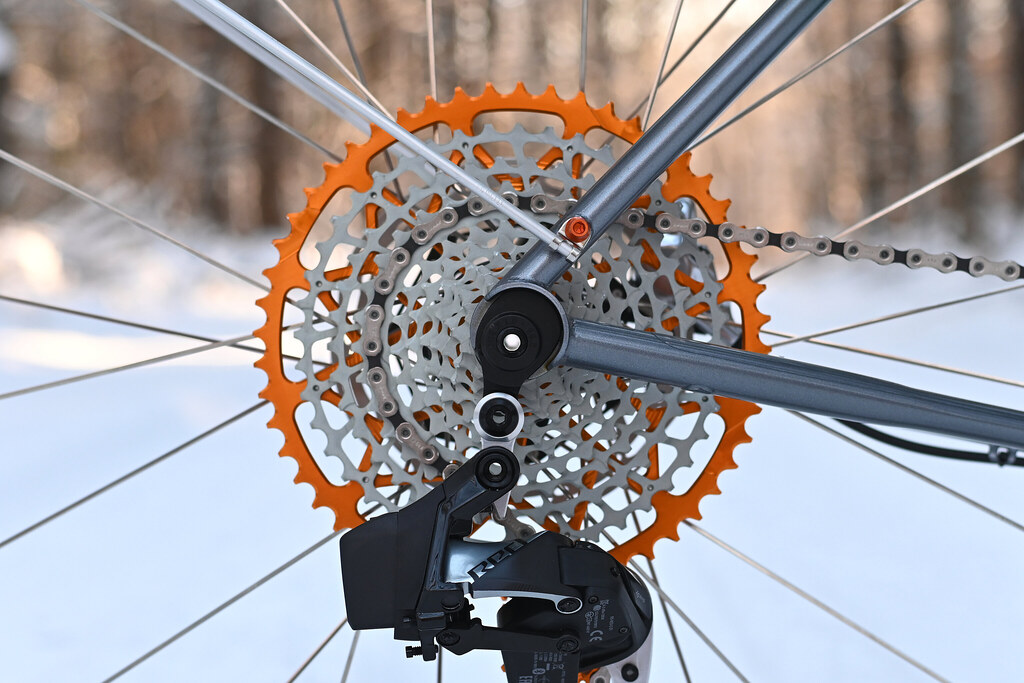 Here’s the matching half frame bag by Ruth Works: 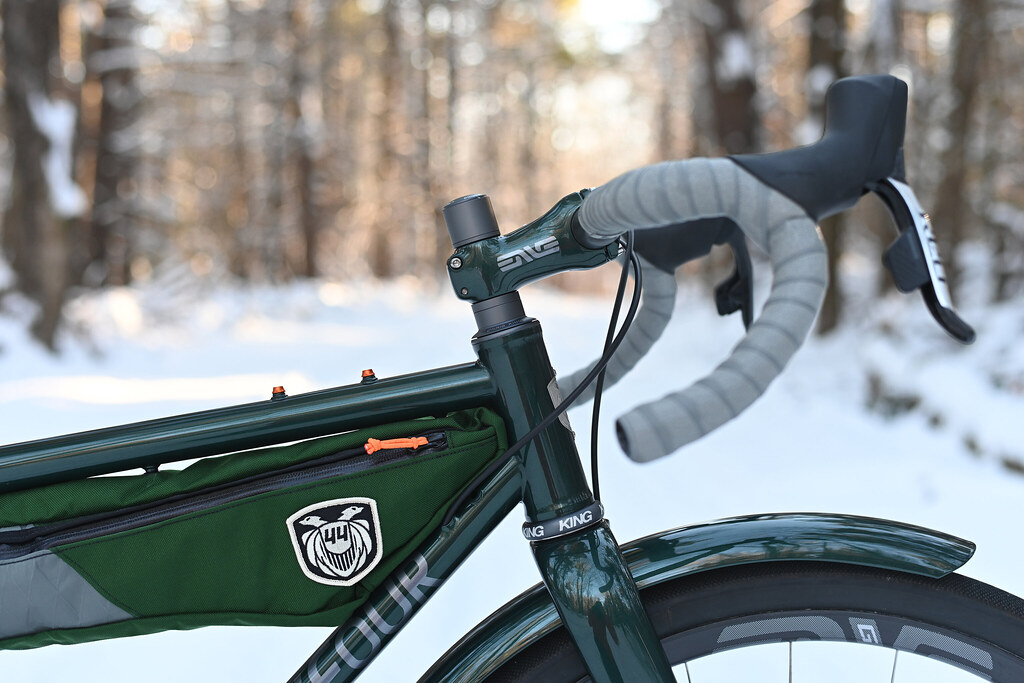 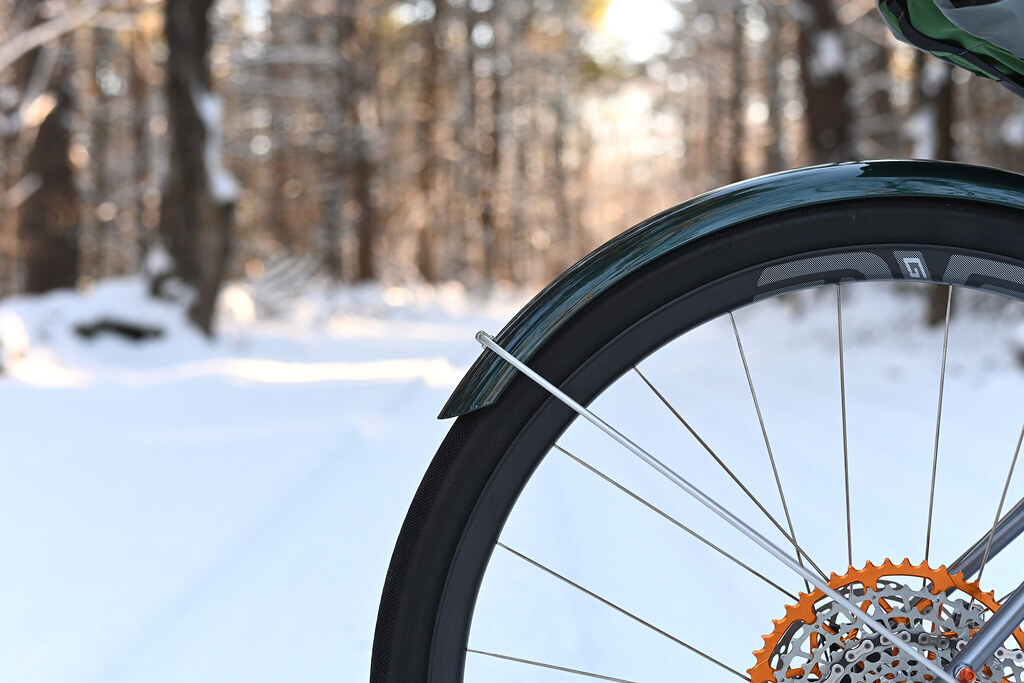 And a parting shot: 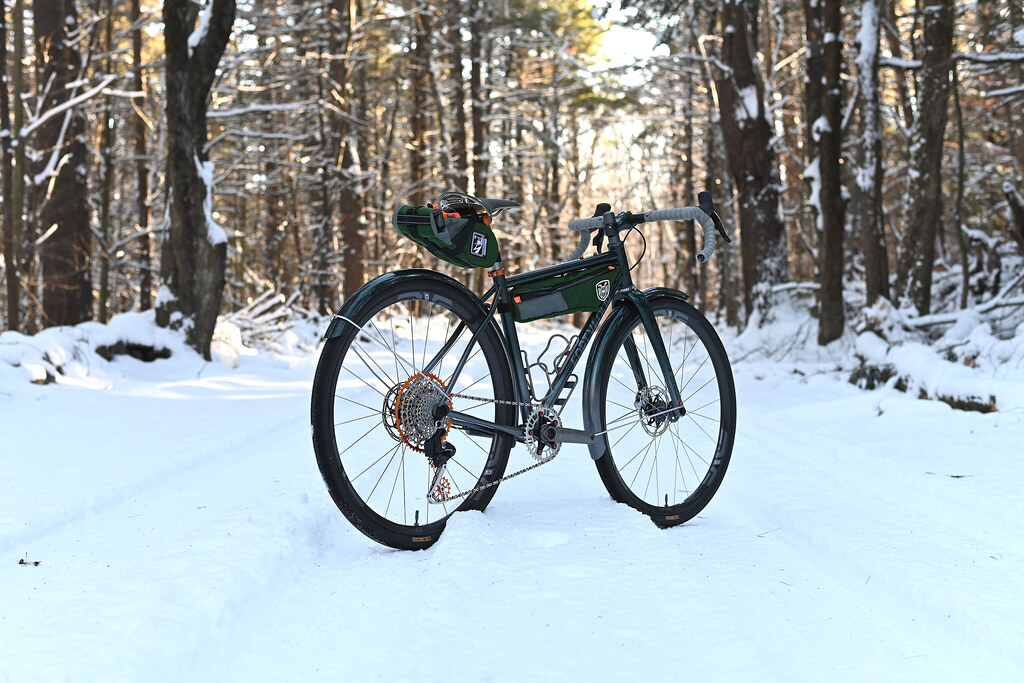 And here’s the Flickr album of all the repairs and updates.

Thanks for looking. Till next time, keep that rubber on the ground and your bike locked.