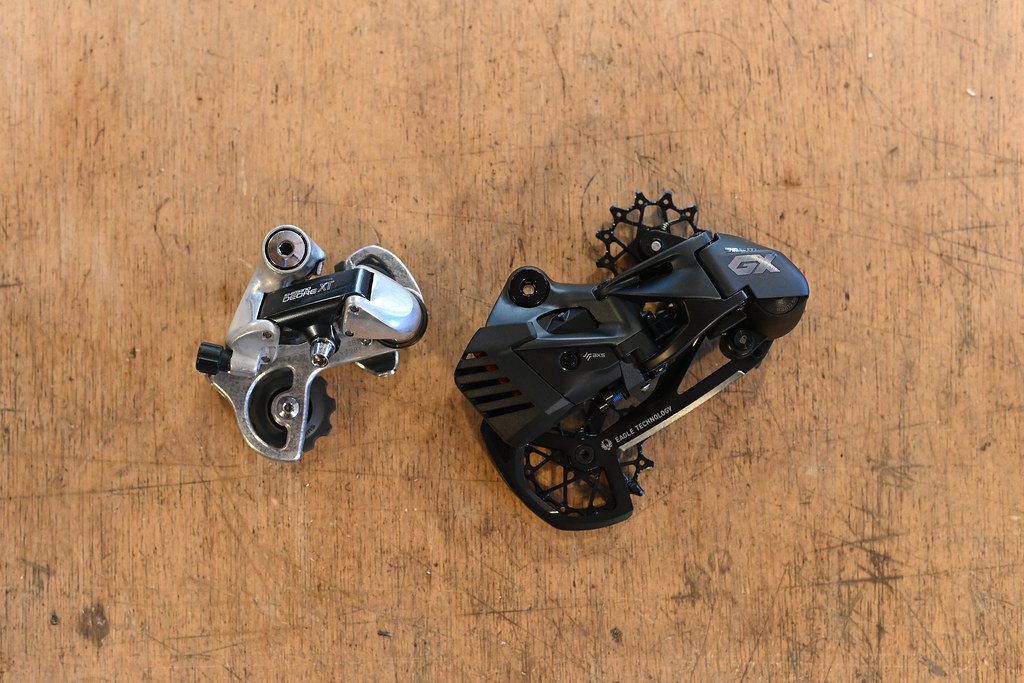 Editors Note: The above image is purely a visual for size and technology comparison. It is not meant to compare old vs new nor is it a Shimano vs SRAM comparison. The GX AXS rear derailleur is actually my personal piece of kit for bike packing excursions to quickly convert my singlespeed to a geared bike for long hauls to maximize time of installation and conversion between setups.

Shimano Di2.  SRAM AXS.  Fox LiveValve.   Rock Shox Flight Attendant.  eBikes.  Now there appears to be 2 patents from Fox where one is for a bicycle hub that has pawls that can electronically be disengaged (the idea being is opens up more sensitivity to rear suspension) and the other is for a rear derailleur clutch that can electronically be switched off under successive/rapid movements so it frees up the suspension to compress more without the drivetrain counteracting it with the clutch engaged.  Both basically aim to separate suspension action from chain forces.  Via sensors.  Are we beginning to jump the shark here?  Are we beginning to verge into the realm of consumer right to repair?  I’m beginning to wonder when and where things will end.

Now, I’m sure everyone is familiar with that word: Sensors.  You’ve probably heard about them when your car is in for repair.  What was the problem?  Bad sensor…  Or when the refrigerator was on the fritz.  What was the problem?  Bad sensor…  Or your dishwasher.  Problem?  Bad sensor…  Or your washing machine.  Or the dishwasher.  Or… Luckily my stove is gas and is the model just before they put sensors in it.  Keep in mind, I’m not saying everything has a sensor, although it seems like a lot of what we use is chocked full of them.   Not too long ago, I recall it was in the 1980’s and the formidable years of my childhood, the toy industry went through a wrath of putting batteries in just about everything.  I can vividly recall thinking some of it was cool and exciting while others were odd (and still is): You take a static object like a toy, and extract play out of it by electrifying its actions and giving the kid a base line set of parameters in which to play.  Its subtle, but its none-the-less there staring you down: You play with me became I play with you.  There’s an amount of control you’ve given up and I’m wondering what levels of innovation we’re trading of control we’re giving up when it comes to our bicycles.

Now I’m not stating that all of the above is bad.  Much of our inventions and automation are tremendous work and time savers where appropriate.  There’s some tradeoffs in some circumstances.  There’s some gripes I hear from my local small mechanic’s regarding newer vehicles these days about how they just increasingly can’t work on them because of the buy-in of diagnostic equipment required to solve even the most basic of issues a customer may face (and having to turn them to the dealership).  Read the diagnostic equipment is incredibly expensive.  So goes electronic shifting.  Precision of shifting and ease of setup at the expense of dollars if something were to occur that makes the part unrepairable.  Having installed the stuff on more than one occasion, and counting myself fairly adept at problem solving and fixing just about anything as well as owning a GX AXS rear mech and controller (controller… not shifter) for bikepacking mode which is a tad on the counterintuitive side, I have to admit upon looking at this stuff its basically a toss away with the exception of the pulleys.  And it seems like there is now a lot to this stuff out in the market and on the horizon that is potentially unrepairable with absolutely no plan for reclaiming or recycling any of it in the near future.  Enter sensors in derailleur clutches to disengage under compression.  I can hear that LBS conversation:

Customer: “My clutch is broken on my rear derailleur.”

Shop Tech: “No, its not.  The sensor died so we have to replace the rear derailleur.”

I’m working on a sensor so when it breaks, you just replace your whole bike.  Or at least that is how it would appear where we’re headed from a sarcastic point of view.  Electronic elements for data acquisition on a bike for testing I get.  Even eBikes I get.  They’re not for everyone but for those who do need them, they can be a gateway to greater understanding or even just riding again and maybe just maybe, graduating to an “analog” bike.  And there it is.  Analog makes me slightly cringe with one eye open and the other squinting.  The Industry has reinvented itself to the point we have to use new words to describe our bicycles we traditionally understand as bicycles to justify how a new bicycle, aka an eBike, sits in the pantheon of bicycles.  And I don’t even want to get into the whole pedal assist vs throttle bicycle thing.  In short, pedal assist good.  Throttle bad.  Throttle means it’s not a bicycle and therefore needs to be regulated, put into a classification system with yearly state and local registration requirements because, and you know it:  It’s not a bicycle.  But I digress.

Electronic shifting and electronic elements of bicycles?  I’m of the opinion it teeters on turning my bicycle into a toy with batteries I forgot to remember to recharge.  Again, these all have merits worthy of appreciation and those of scorn.  As a reminder: I’m not saying all of this is necessarily a great evil.  Heck, I own that GX AXS rear derailleur with tricked out Garbaruk pulleys for converting my singlespeed to a geared bikepacking setup.  However, I do wonder where or when it will be enough to satiate our urge to “innovate”.  I will say there is something a tad romantic about pushing on a lever that pulls on a cable that actuates this thing that makes it easier or harder to pedal my bicycle.  And I will say the more our industry turns to electricity to power our future, the more I look at my singlespeed and love every bit of its duplicitousness.  On the one hand its stripped of its drivetrain and elegantly simple from front wheel to rear.  However,  slightly masochistic and anyone who has ridden a singlespeed with any regularity will know that it teaches the rider subtle skills you can’t otherwise attain on a geared bike by a long shot.  On the other end of the spectrum, depending on the build, its incredibly high tech: My personal singlespeed has hydraulic disc brakes, is equipped with Fox’s GRIP2 damper, sports carbon rims and has a part produced by lasers.  Heck the driver inside of my I9 singlespeed hub they no longer produce is made on a Wire EDM machine, which if you know what that is (Google it)… that’s crazy all by itself.

At the heart of riding a bicycle, I love its simplicity.  Push on pedal, chain tugs at gear, rear wheel propels me forward.  Repeat again and again.  Repeat slowly and enjoy the scenery.  Repeat rapidly and become lost in a world of action and reaction where everything kind of just melts away and the path ahead of you is your sole focus.  And there’s something I really do appreciate about being able to have a good bit of self sufficiency when it comes to maintenance.  I’ve dealt with Di2 “diagnostics”.  Carrying my Surface tablet down to the shop, literally plugging a bicycle into a computer and running tests on each and every part of the drivetrain to try and ascertain if that was the issue or not along with discovering a few parts had an update to install.  On the one hand, ok, this is pretty sophisticated and yes, yet another piece of the service puzzle to be monetized at the shop level.  On the complete opposite side of the spectrum: You’ve got to be kidding me.  So when I read there’s a possible clutched rear derailleur actuated by a sensor that turns itself on and off under compression to free up the suspension from the drivetrain I’m at once thinking this is incredible technology and super sophisticated but, and there is a but, I’m a tad bit chuffed by the sheer level and layers of complication our beloved bicycles have become.

I can’t be the only rider out there questioning all of this, can I?

Posted in Opinions on all things Bikes.
Share
NextNew Road