So it’s been raining a lot for the past 2 weeks here in the so called “Great White North”. We’ll get 1-2 inches of fresh powder to only have it warm up, then turn to rain and sleet. Not exactly fun conditions to be outside riding in. But that’s New England for you. We call them “New England Samplers” here at 44HQ. Those ones when one minute it’s sunny, next the temp DROPS and it gets overcast, then it starts snowing… Heavily, only to somehow warm back up again to change over to sleet, freezing rain and everything in between and/or beyond. So we’ve been getting a lot that lately. But I know it’s only a matter of time before things get good. The other day (friday) things got good. All day Thursday and into the evening it was snowing gently. Just a coating over everything as the ground was wet and tacky but things weren’t sticking till the sun went down.

Lynn inherited a new to her 2004 Subaru Legacy Wagon. I’ve been driving it as she’s needed my car which has snow tires (yes, 2 wheel drive with snow tires is still better than AWD without snow tires when it gets icy…). I keep a stash of food in my car at all times just in case I either run out of forget to bring on a ride. Well, the new car doesn’t have that stash and I forgot to bring any along. This will come into play later on in the story… Woke up to sunshine on friday. I worked the morning and decided to call it quits early to head out on Lucky No. 40 to catch up on 2 weeks of no riding. Yes. Yes… AND yes. Here’s how things started:

We headed out at the trailhead which connects across a field joined by the above which traverses a handful of rock walls. Immediately it became apparent that Greenfield had more snow than Lyndeborough and that today’s ride was going to be memorable. Snow enveloped the whole forest and was layered on everything. Just beautiful. And we had the whole damn place to ourselves. I decided to take a chance and do a different part of a loop I typically do which takes me through a few different sections of trail. There is a 150′ snowmobile bridge which has recently had it’s decking taken off to be repaired in the spring. That was our destination to keep the ride reasonable. The bridge is flanked on one side by a massive beaver dam. This has a small spillway that you can leap across. I was hoping to be able to make that leap and cut the ride to reasonable. That also comes into play later on..

So the above turns into a giant downhill which does a series of LONG switchbacks down the side of a hill. This is dotted with massive hemlocks, rocks and more rock walls to cross. 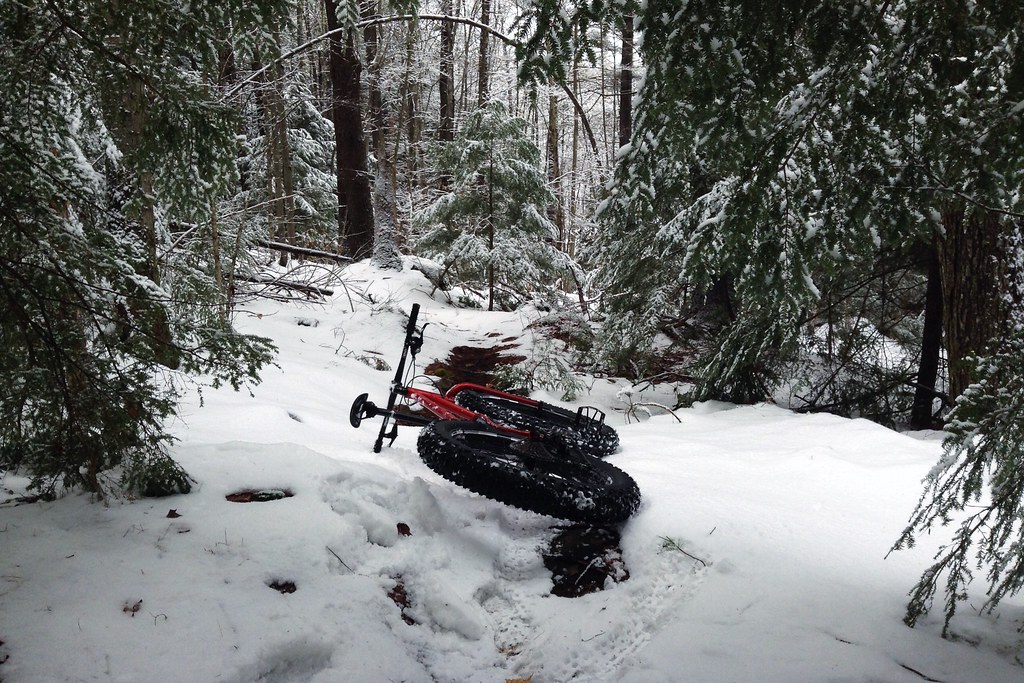 Cross 3 rock walls, a bridge and road and you’re back into the thick of it. The conditions actually turned much deeper here with a hard crust beneath the 1-2 inches of powder. So going was slow and arduous but still balls of fun! Well we (My pup Kaya and I) got to the bridge that is out and started out traverse of the beaver dam. Get to the spill way and with all that rain we have been getting the water is well over knee deep now AND the spill way has widened enough that a missed jump would mean waist deep water. It’s getting darker out (storm is brewing), I’m getting tired and now hunger is starting to take grip. Remember, we’re out in the cold working our ass off to pedal through thick snow but also working to keep warm. That means lots of calories a burning. The best part is I’m only 10 feet from the other side of the bridge’s end… Kaya would also have to swim across this section. So I decide it’s not worth the risk and we have to take the long way around. I think I stood there for a good 5 minutes. But that means more sweet riding ahead. So off we go. 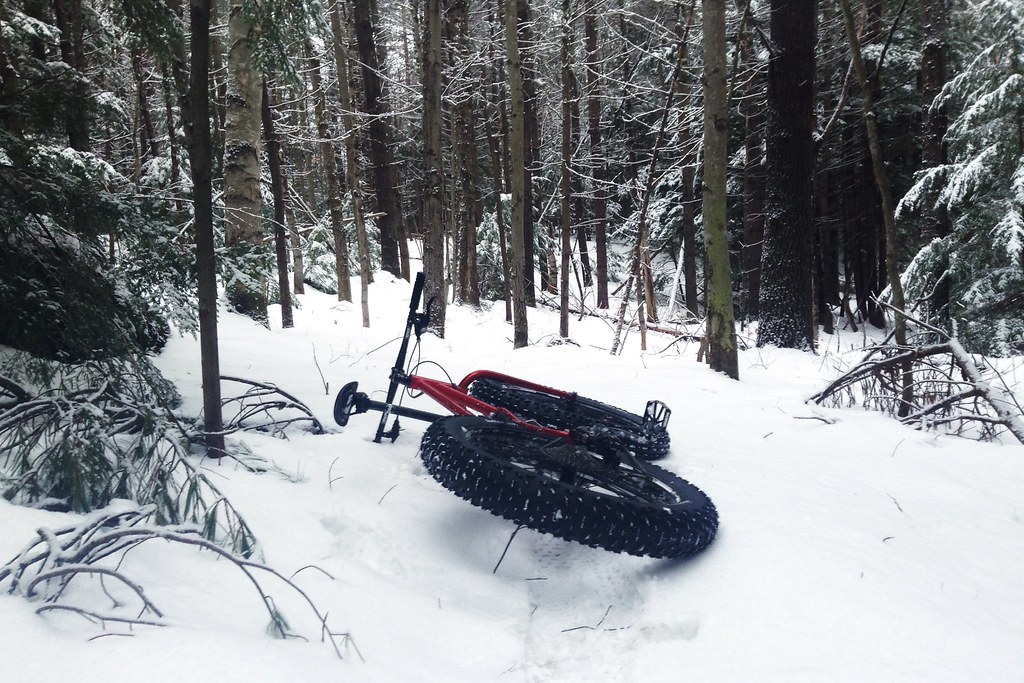 This next section involves some climbing. More calories burned. More epic scenery of NH woods. But hunger is really starting to set in. Blood sugar starts to drop… The scenery starts to get a little blurry and I’m feeling a wee bit woozy. But gotta keep on moving forward. This one keeps the spirits high when the going gets tough. She’s a good buddy: 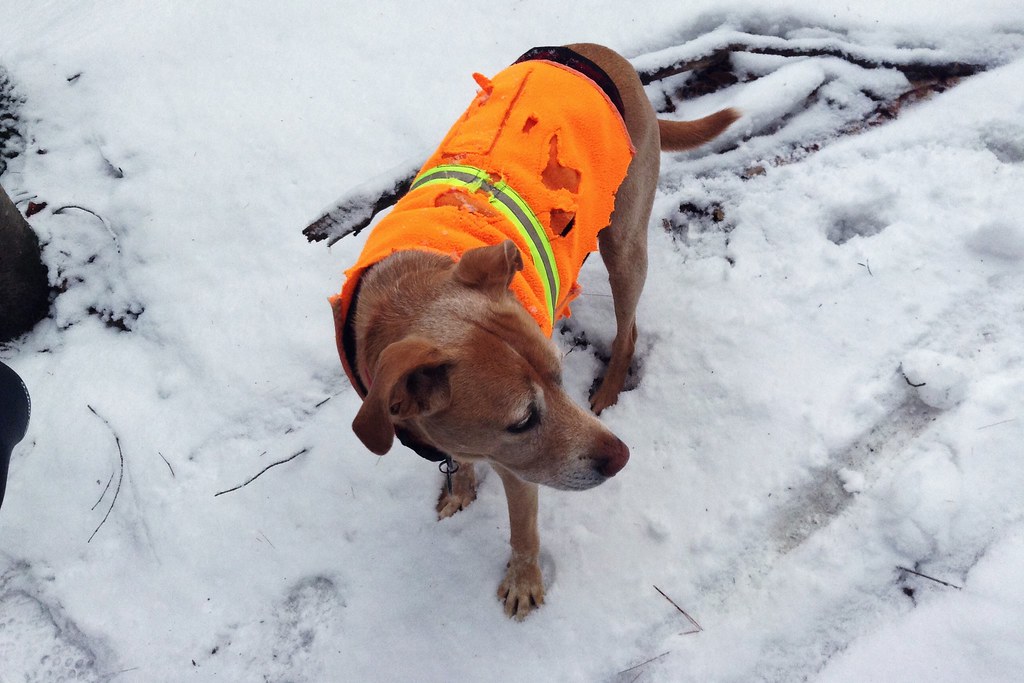 I have to focus now and keep moving forward reminding myself that I’ve got a warm fire at home, I’ve got vittles waiting, a roof over my head and hey, I’m not being shot at either. Things could be worse than being hungry on a bike ride when things are getting cold and dark. We reach a road that we can ride down avoiding a kind of long stretch of climbing UP in snow covered trail which turns out to be a wonderful decision a few minute later. I taught Kaya a trick so if I tell her “walk with me” she will pull up beside me and run right beside me while I ride. So we’re flying in formation wing tip to wing tip down the road till we reach the next trail head cut. No cars to deal with either which is good in my woozy state. Somehow I’m holding off a bonk. More climbing… Now walking. The legs are out of juice. Kaya’s waiting for me at the tops of hills “Hey, what the heck’s the hold up Pop?” She keeps me smiling. The woods is definitely getting darker and fuzzier and hunger is really getting intense to the point of feeling nauseous. I try and imagine what I’m going to devour when I get home… “There’s a stick of pepperoni with my name on it. I’m going to destroy that thing. Oh and some strawberry greek yogurt. That’s going down too. Banana first. Then Peanut butter and toasties..” Keep moving forward, cross a bridge that is atop a rushing stream into more climbing. We finally crest the hill and complete the loop and head back over the field sticking to the low point to keep out of the wind. I look up and realize that yes, weather is coming in. Lesson learned. No matter how long or how short ALWAYS bring food in the winter. I damn near fucked up on this one. Good thing is though that if weather was coming in, there were plenty of spots along the way I could have stopped at a house and knocked on a door for help. But still, lesson learned. We get out of the trail, back to the car and pile in with the heat cranked up. Didn’t get cold which was a good thing – the layering and setup were good. Food… not so good. Give kaya lot of puppy treats. One in hand as she’s eating one and I pull rank: Down the hatch. Yes I was that hungry I’m eating my dogs treats. I give her a few more just to be fair.

So although the ride was super fun, and I’m beat down this morning but ready for more, I’m not going to forget to bring food ever again. Lesson learned and I know it. You burn more calories in the winter as you are working to ride but working to stay warm. Hungry bites me hard when it does. I’m not huge, but I’m not small either around 6’1″ 185lbs. I need fuel. We all need fuel. So take it from me: Never head out into the great white north or anywhere for that matter without the right setup #1, but also be prepared for anything and bring food / snacks to keep the spirits high, the legs moving and the eyes less fuzzy.