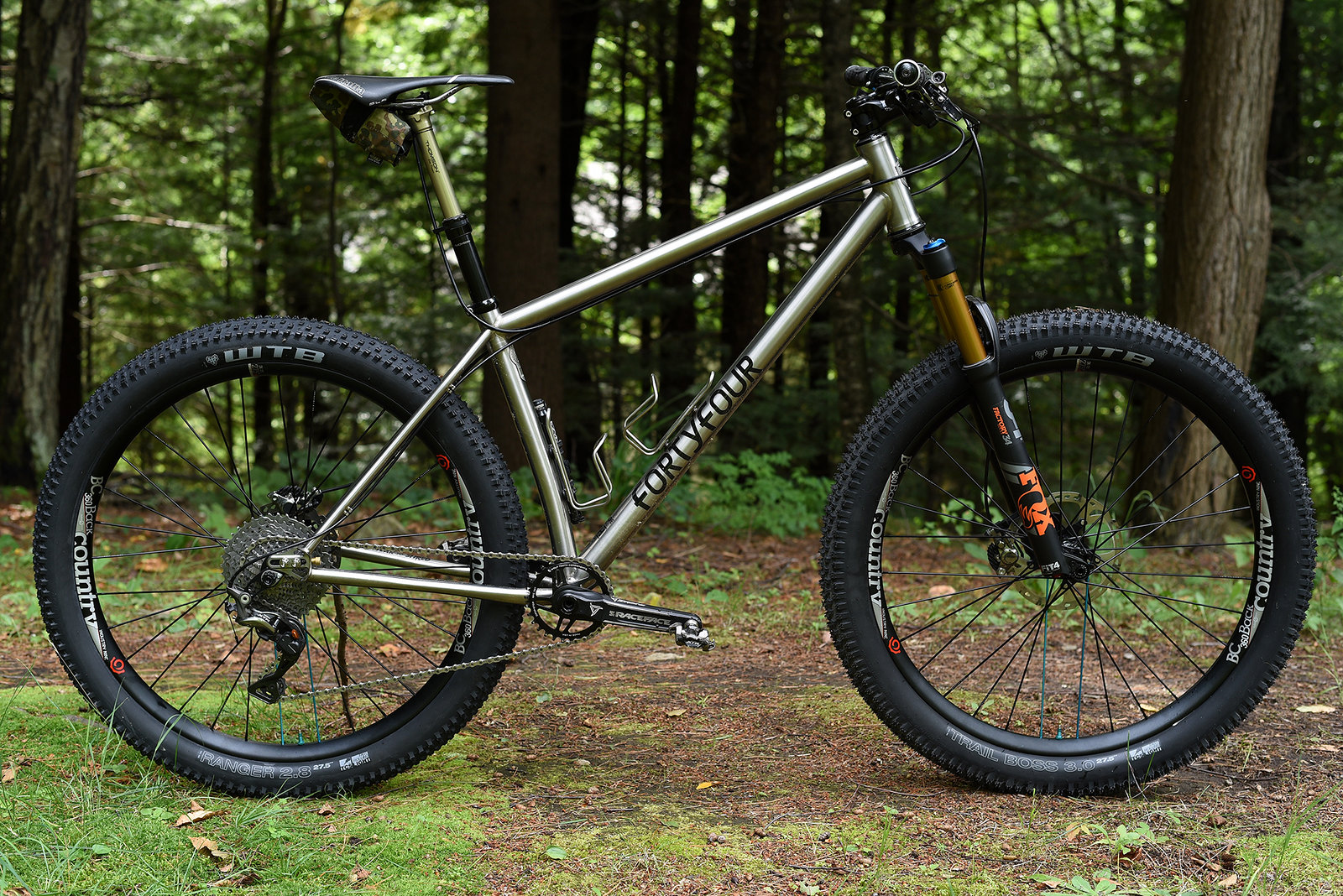 One of the challenges I faced with this build was accommodating two separate wheel sizes and tire sizes. Some have asked me why I chose the DH standard of 157 Superboost for a hardtail. Well, this should help to explain where I’m headed. That’s not to say all hardtail’s from here on out will sport this standard, but there’s a strong reason why you would choose this over Boost 148 or 12×142 with a 73mm bottom bracket shell width. It’s unfortunate that another standard was created in 148 as the existing 150 / 157mm standard was pre-existing and when paired with an 83mm shell width, the chain line is exceptionally good. And with these two existing standards you literally and figuratively open up SO many possibilities when it comes to the trend towards large volume tires. A little bit more tread gains the rider so much more options for tire/wheel sizes and your body really adjusts quickly to this slightly wider stance. For the average rider, which is the majority of riders (something like only 7% of riders actually race) there’s lots to be gained and the advantages are numerous without much compromise. So before I get ahead of myself, let’s again roll up our sleeves and dive in head first with this build in 27.5+ mode.

Up above you’ll note the tire combo of WTB’s Trailboss 3.0″ TCS Fast/Light tire and a WTB Ranger 2.8″ TCS Fast/Light option. There is room out back however for a 3.0″ tire but I wanted to try a combination of tires with this build. The Trailboss is truly a BOSS looking tire. 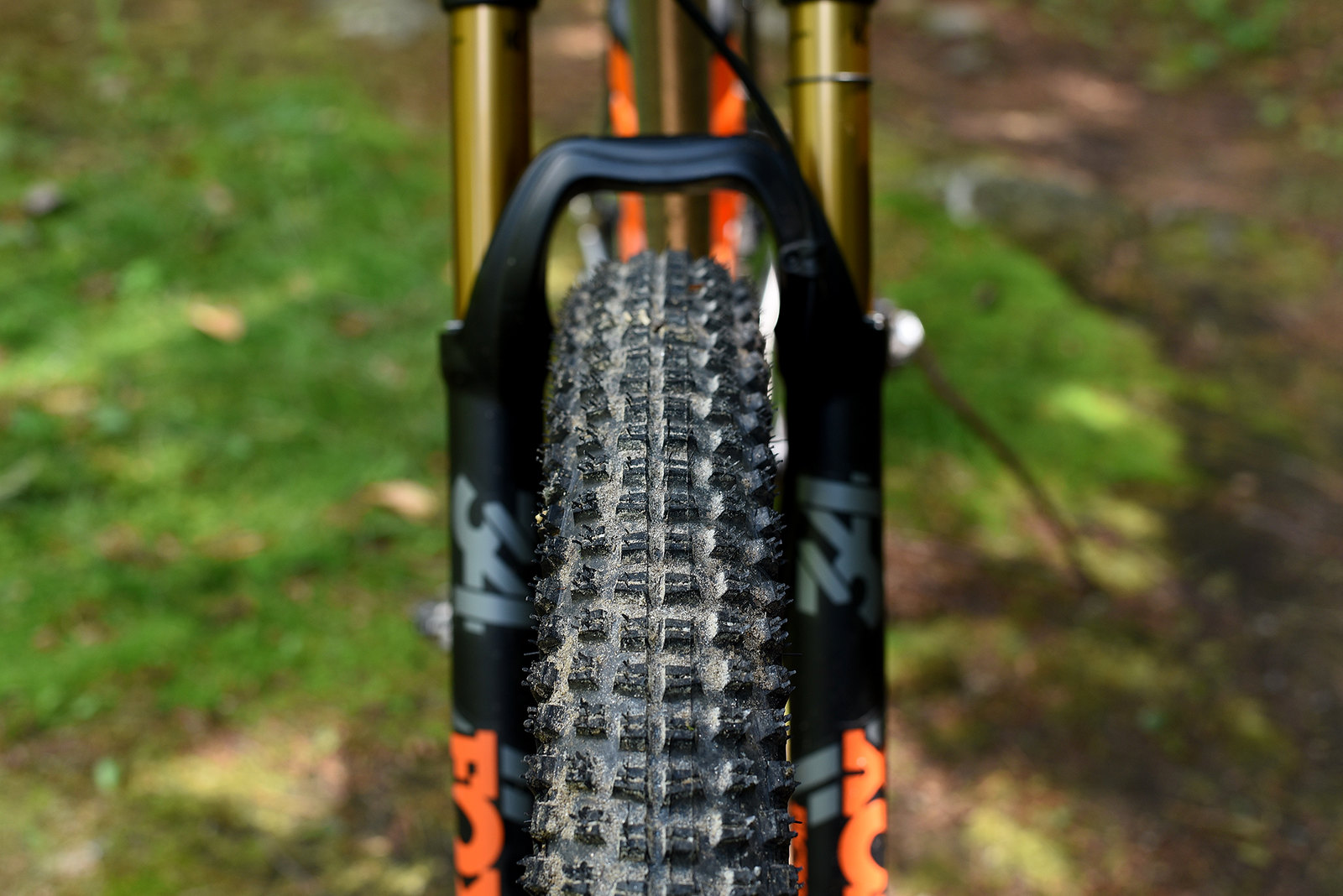 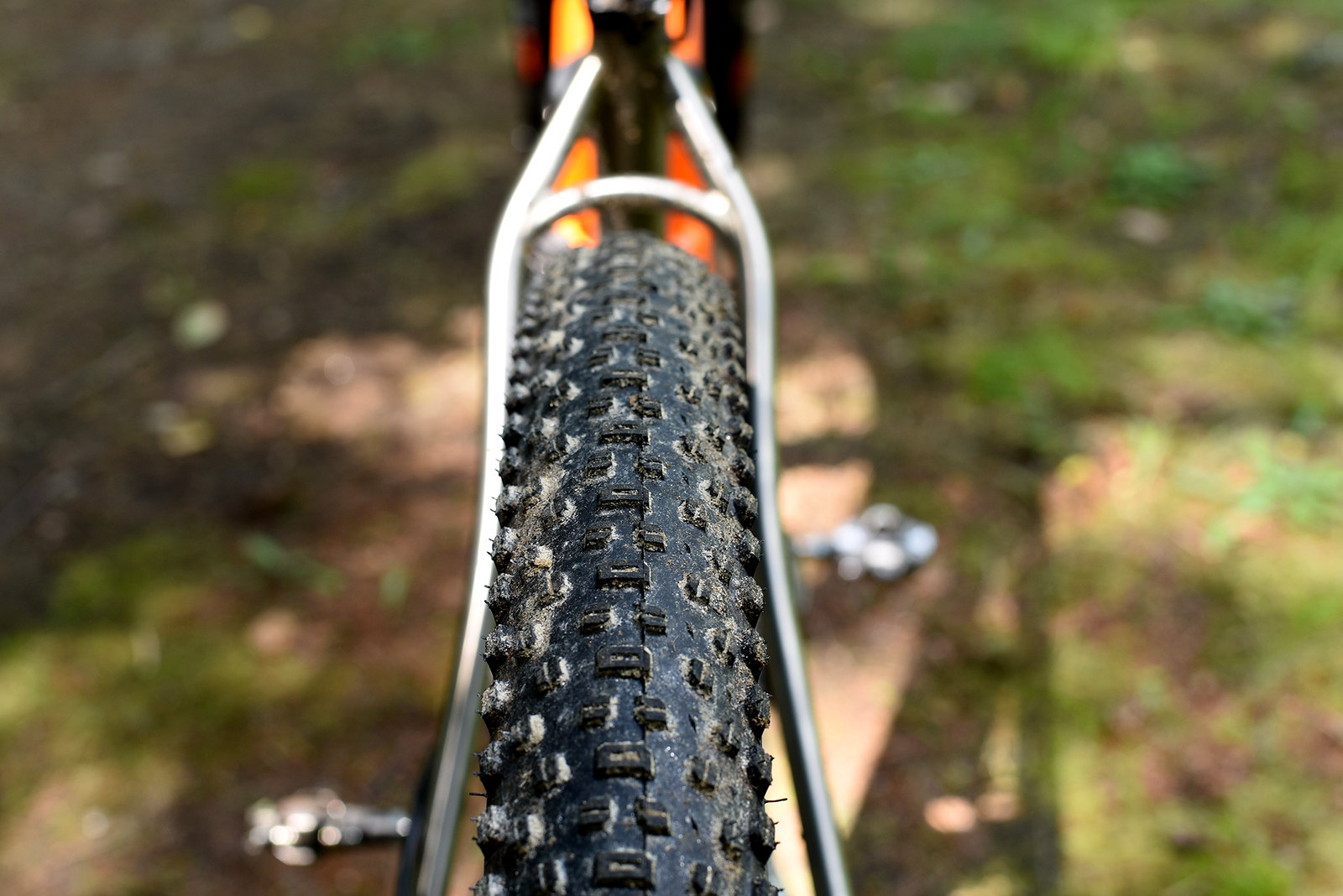 This combo puts the bottom bracket height about .25″ lower than what it was with it’s 29″ pair of wheels. So 12.5″ vs 12.75″ (those are “parking lot” numbers – so no sag accounted). Out on the trail, I noted no relative need for watching pedal strikes. That change was nominal and I already have to watch pedal strokes in tech with all our granite. Here’s a close up showing that tire clearance with stays set at 16.5″: 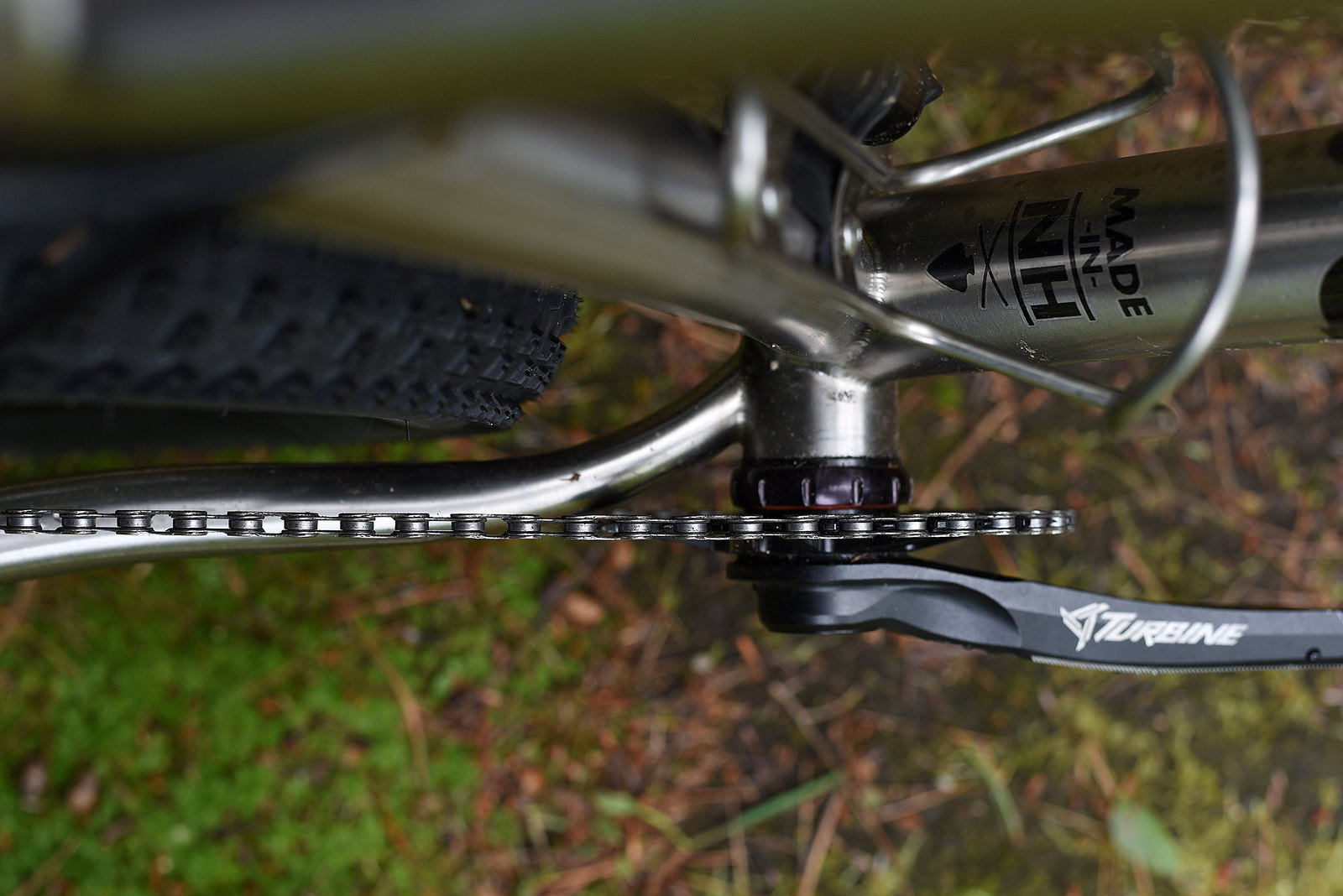 That’s pre-ride above with post ride below. You’ll note mud shed well and did not congregate: 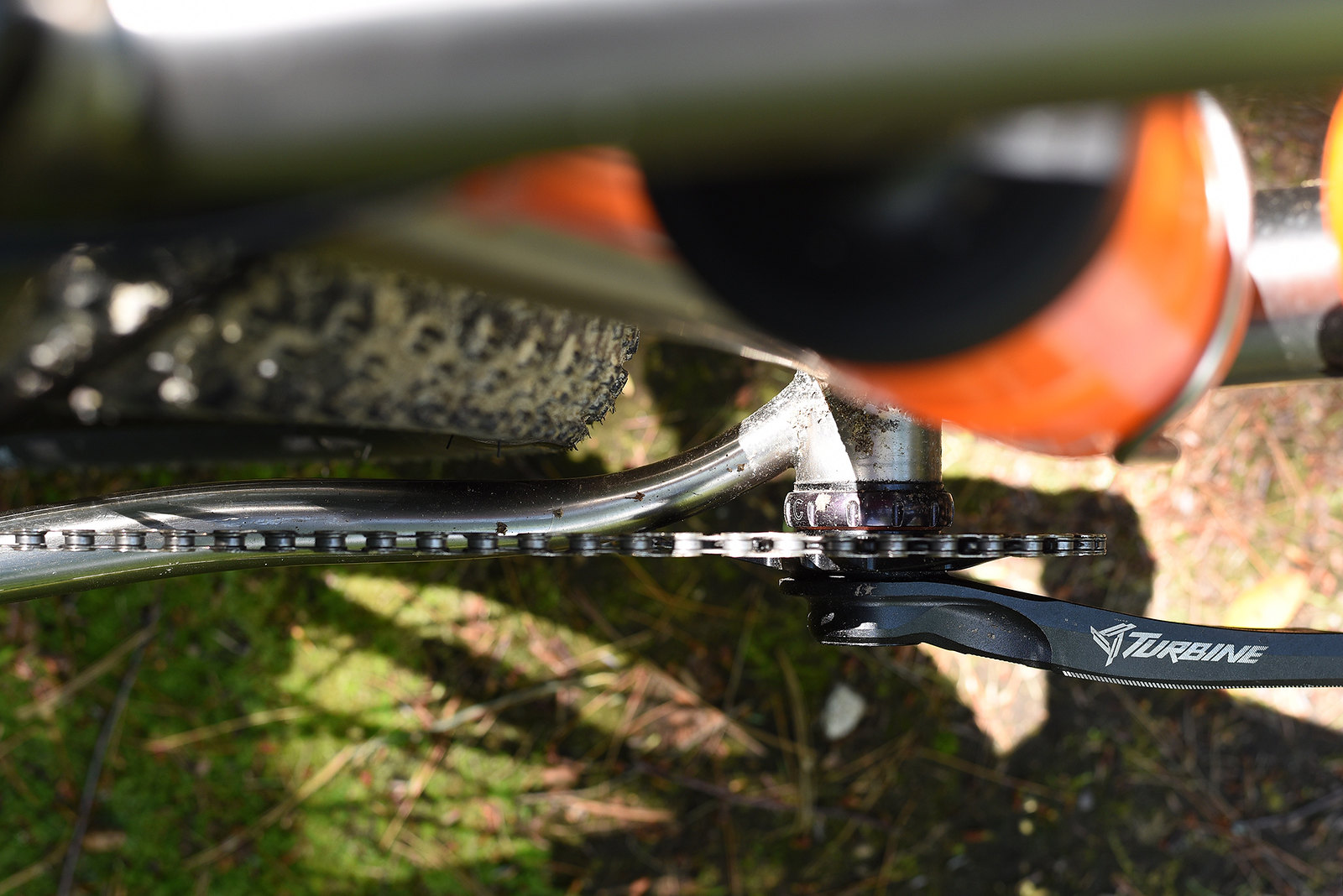 Also of note is the increase in seat tube to tire clearance. Tire profile still hugs that curve relatively well but you’ll also note from the previous image, that wheel still can be moved towards the seat tube and still have lots of clearance: 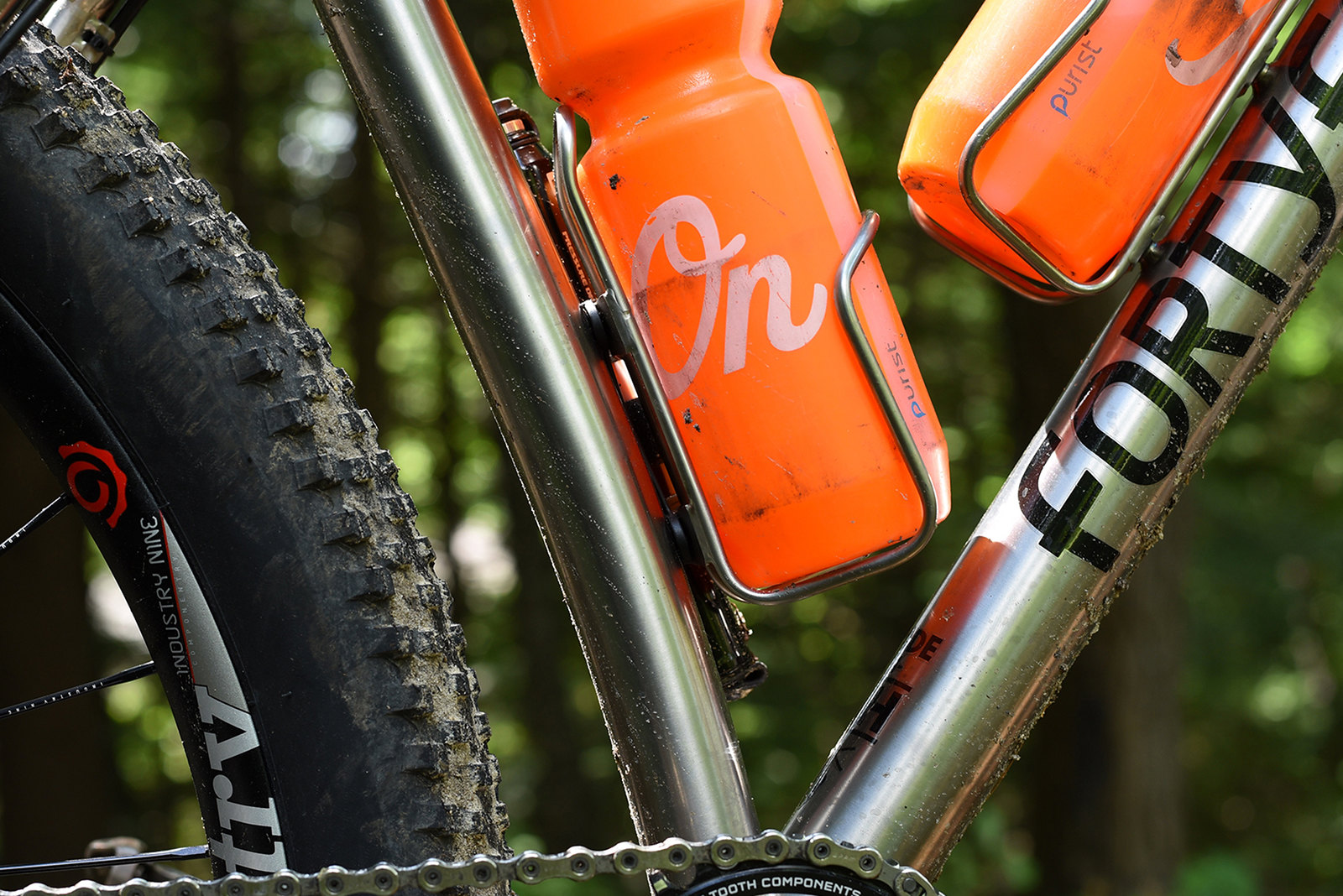 There’s no magic here, just the right amount of sauce in the right places when making these stays to get me where I needed to be. I had been planning this whole build for well over a year and really was looking forward to that first ride out with 27.5+. I’ve been building a bunch of these for clients, but did not have one in my arsenal. This was the perfect opportunity to add this option via a wheel set and frame that can handle this much tire.

You’ll also note if you’re looking closely that XT M8000 was swapped for my XTR M9000 kit over from another build. Simply put: This drivetrain is exceptionally smooth and shifts are butter. Since this bike has quickly become my go to frame, I just honestly had to do the swap over lunch yesterday… Brakes, cassette, shifter and derailleur made the short migration over and the XT M8000 went onto my other 1×11 build in steel. Drivetrain up close: 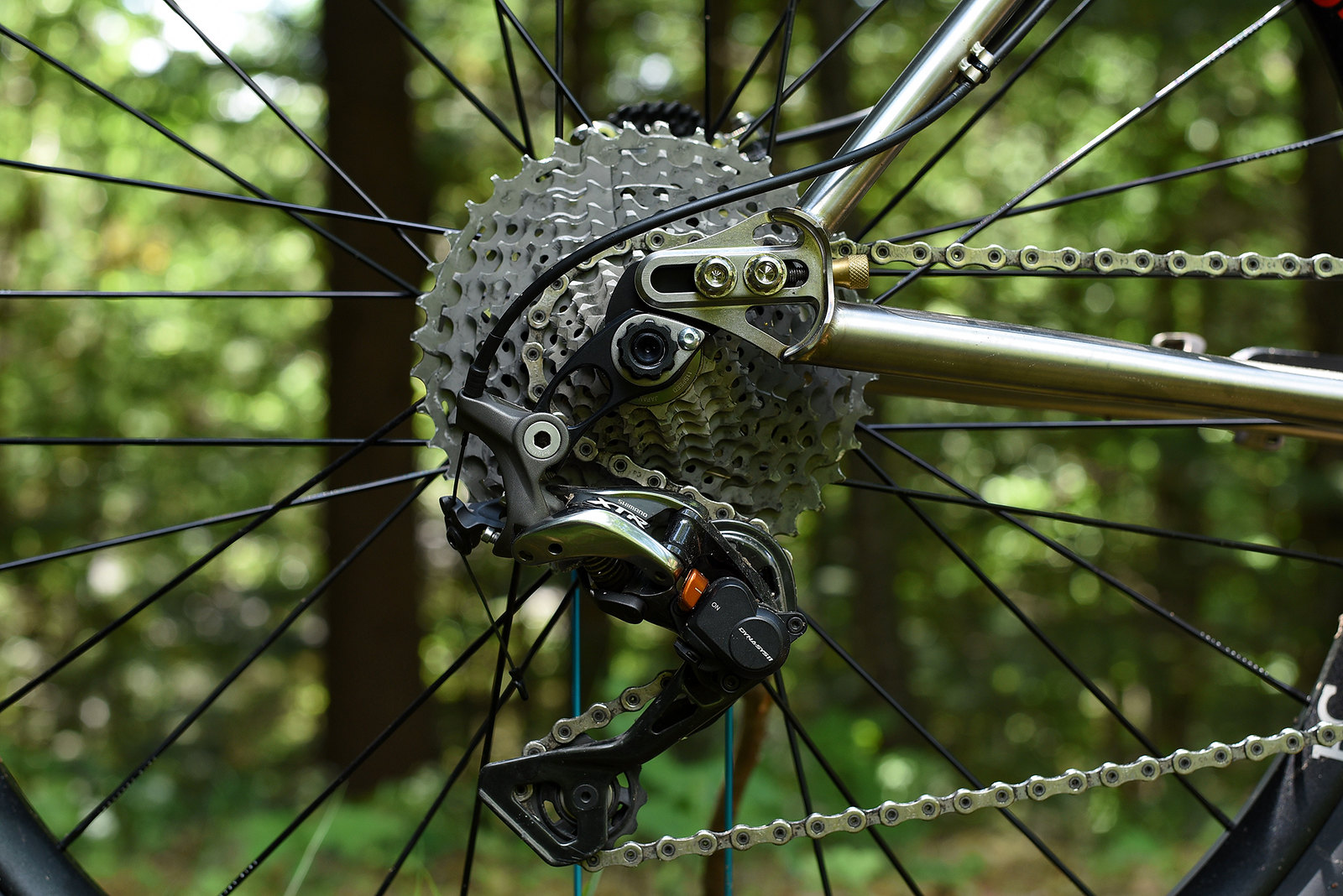 Shifter and brake lever (I need to look into an iSpec-II mount for that shifter): 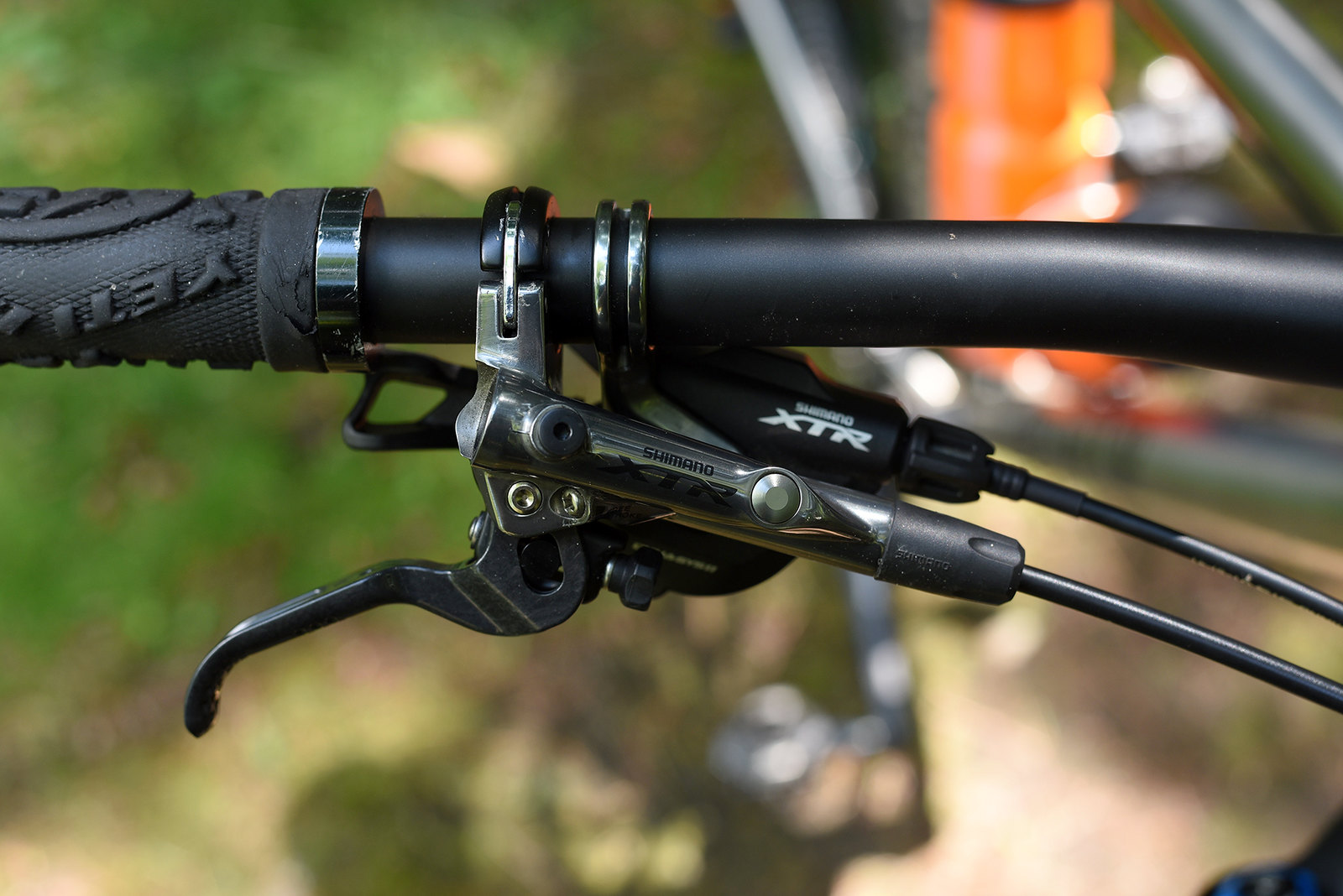 And let me tell you after taking pictures post build and after lunch, the itch to ride was incredibly difficult not to scratch. But I was diligent and continued working until the bell rang. That’s that Pennsylvania German discipline coming out. Or maybe it’s actual more of that stubborn gene bubbling to the surface that PA Dutch is known for? In either case, I was extra excited about last nights ride at 5pm. Around that time, Lynn came down to the shop disappointed as she had accidentally fed Kaya who was going to come along for the ride. So no ride for her since she was fed and needed to wait a good 2 hours post meal. That meant SOLO RIDE from 44HQ! (Today we’ll go together for a shorter ride). So what was originally going to be another 4-5 mile shakedown turned into a jamming 17 mile shred-tastic-stoke-stomper of a ride.

So again, out the back door around the back of the shop and out onto Old Temple Road which quickly turns to dirt. First 100 yards I could feel the difference in wheel size. A gear or two lower or higher and I can tell I’m having to pedal just slightly more or less than when on a 29er to maintain forward motion. Subtle but there. Old Temple continues but you bang a left down Winn Road which is all down hill to a classic short cut where you can hammer into and through two turns that are a bit of a chicane followed through some double track where a gas station used to stand (now wooded) and out to Gulf Road which again is dirt. Down hill that feeling totally melted. The slightly louder hum of those tires audibly started to make the hair on the back of my neck stand up. That means I’m getting excited for the uninformed. Halfway down Winn, there’s a rock exposed off to the side of the road which from my East Greenville PA days in the alleys off of Jefferson Street and curb hopping, EVERYTHING is a feature to be scoped out and jumped. First bunny hop and it felt like I had unleashed an old beast that had been laying dormant. I love to bunny hop. I can bunny hop my 29ers and built quickness into them, but it’s just not the same type of muscle you can achieve on a 26″. 27.5 has this and so does 27.5+. You can really throw the bike around. Much excite.

After that 5 mile pedal to the trailhead, I was good and warmed up and ready to tackle some single track. This bike did not disappoint. Talk about something really opening up into it’s own. The slight drop in bottom bracket height increased cornering capabilities as my center of gravity is a bit lower but those tires just hook up given their size. The bike flows and the tires suck up all that chatter and noise. Holding a straight line is effortless. I was pretty much eyeing everything I could and bunny hopping everything in sight. A friend joked in Emmaus one time “Dude, you’re all over the place”. Yes I am. I’m hitting every feature I can because it’s FUN. Why ride a straight line when there’s action to the left and right to jump? Anyhoo… 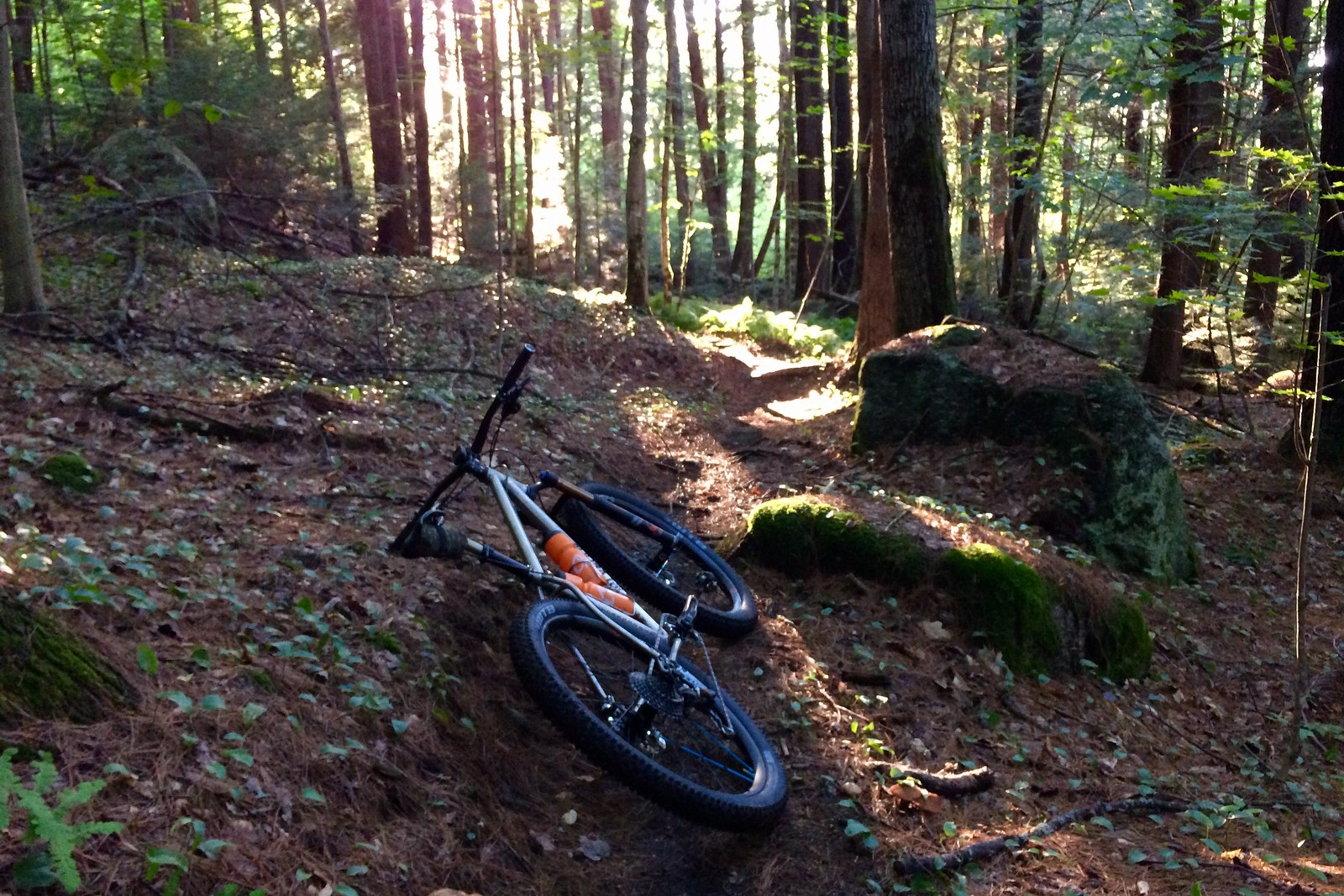 Down a long switchback trail that has no name (however I just coined two sister trails next to this one named “Flag Football” and “Two Hand Touch” which John from the GTA approved). This is a great trail because it’s loaded with features and small “whoops” which you can pop up and over and slam into the next turn. A few off camber sections because of roots and staying on the high side of the bench cut helps. Tires and bike hooked up and hammered into and through these corners at speed. Last run down this I was carrying too much speed and had to skid out past a turn by accident. Seat dropped, pushing with the inside hand and resting my thigh on the saddle a bit and this bike can literally be pulled into and through a turn. I’m having fun which is the point. And I don’t think I stopped smiling the whole way down. 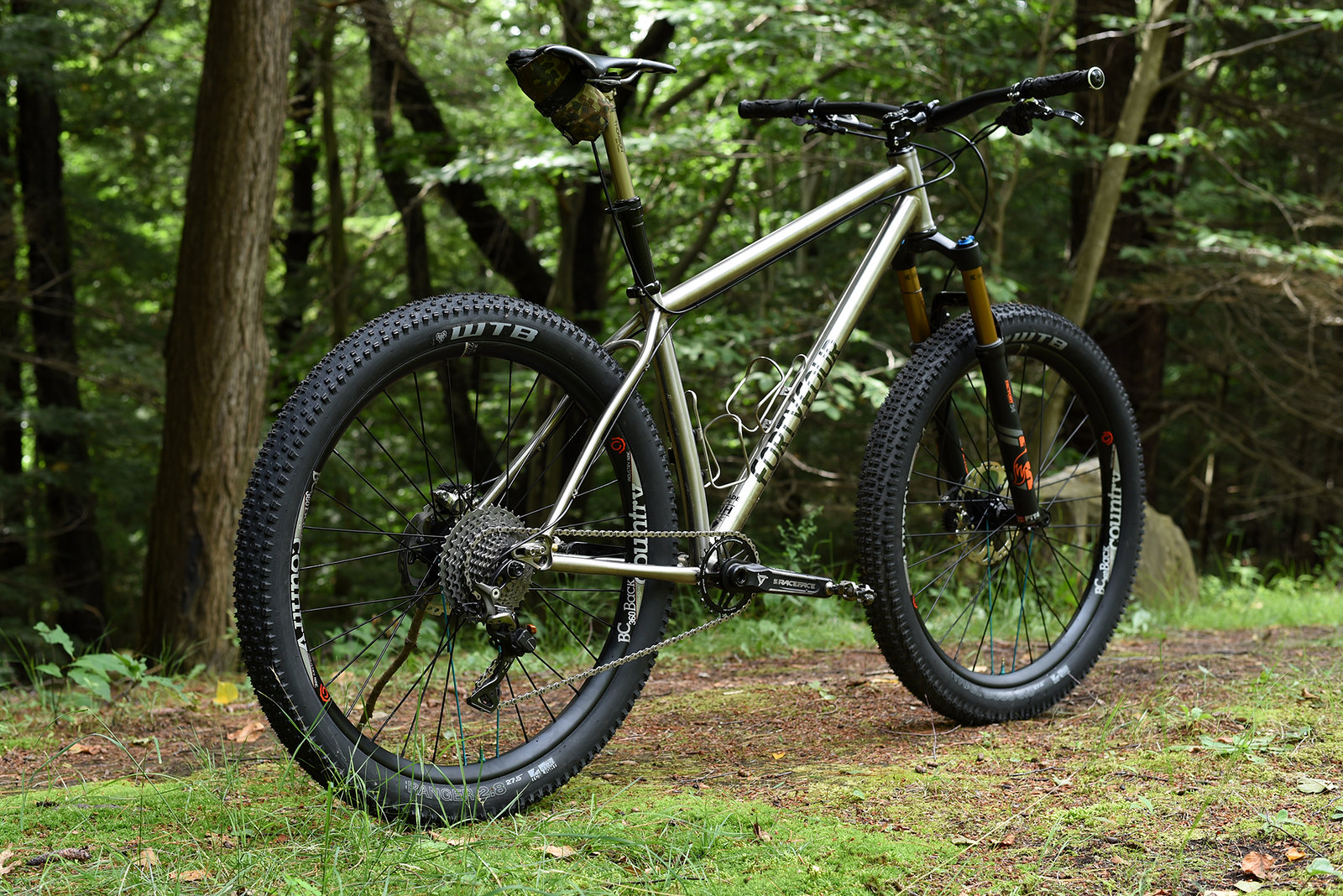 Cross East Road where the CM100 will cross next weekend and hammer more DH over bridges and through turns in loamy fun. I was originally going to cross the 150′ Bridge but bumped into John and Steve from the GTA. Fist bumps and laughter followed with a few tall tales before I joined them on their march up the CM100 course marking it as they went. (Yes, racers note: Two guys on bikes with a stapler and NUE orange arrows in a hydration pack are marking your race course by hand.). It was fun to share some time on the trails that John and Steve dedicate so much time to perfecting. I’m super busy and don’t often get to ride with them on their weekly rides with the rest of the GTA but I deeply am grateful for all the work and outreach they do with local landowners. They pointed out a new trail that they just created so that was an added bonus and it connects to another sweet trail. Double bonus. Double track and single track followed. We headed down Red Top (I was originally going to head down Sayers Descent but figured it was nice to stick with friends). Red Top is just a relatively straight bomb run down hill. John on his SS, Steve on a fully, we laced all the corners together in formation wheel to wheel. You can get a lot of speed down this one and it was super fun to be on Steve’s wheel reacting to his moves and watching my line as we descended. Wheels and bike had no problem. The 5 mile ride home again was more stoke filled. But this bike really comes into it’s own and my eyes have been opened finally to plus with this first ride. It’s one thing to know the merits, but a whole other thing to experience them. This bike is pretty close to the ultimate hardtail and I don’t say that lightly. 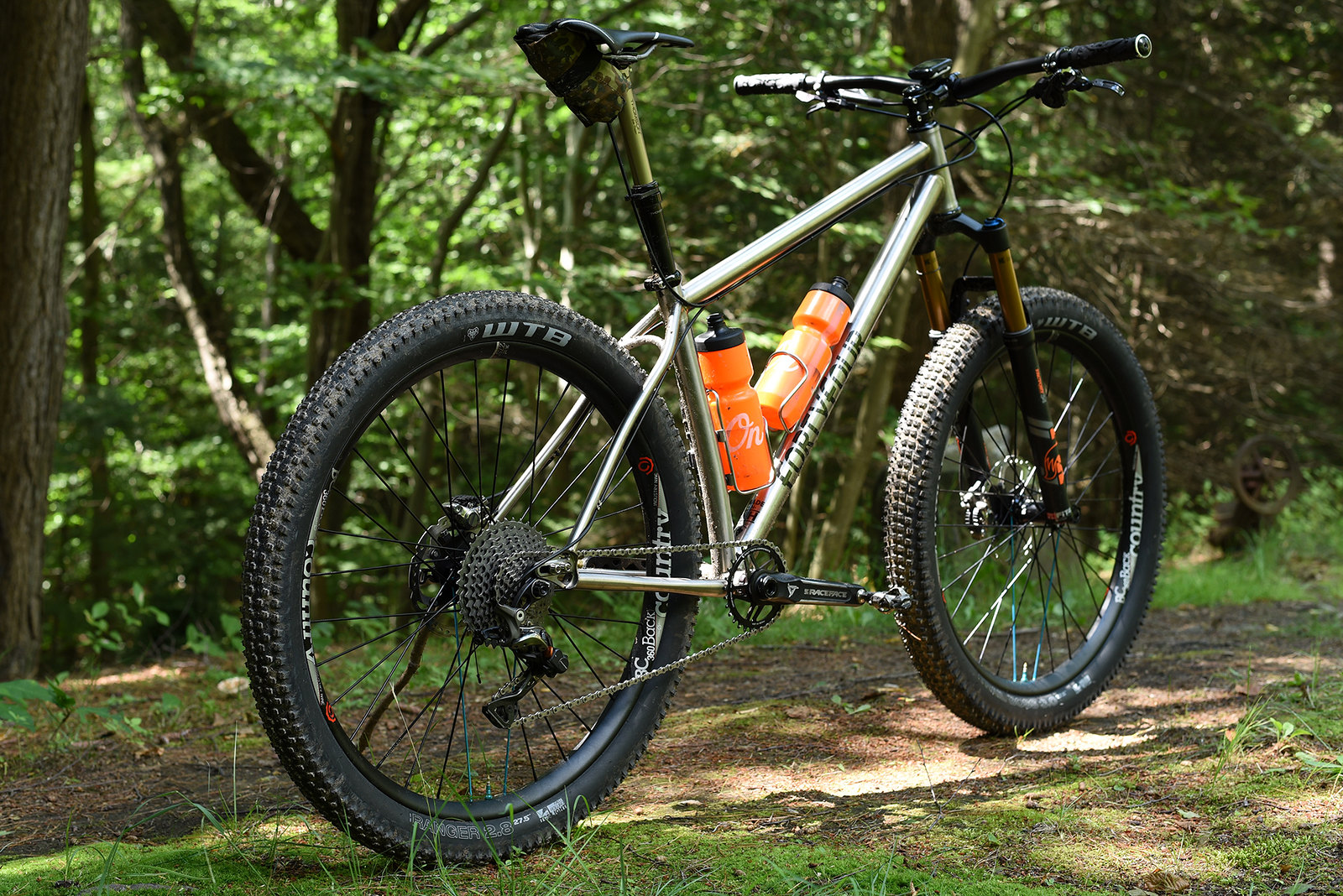 And for comparison side by side, here’s the same frame with it’s 29″ wheel set: 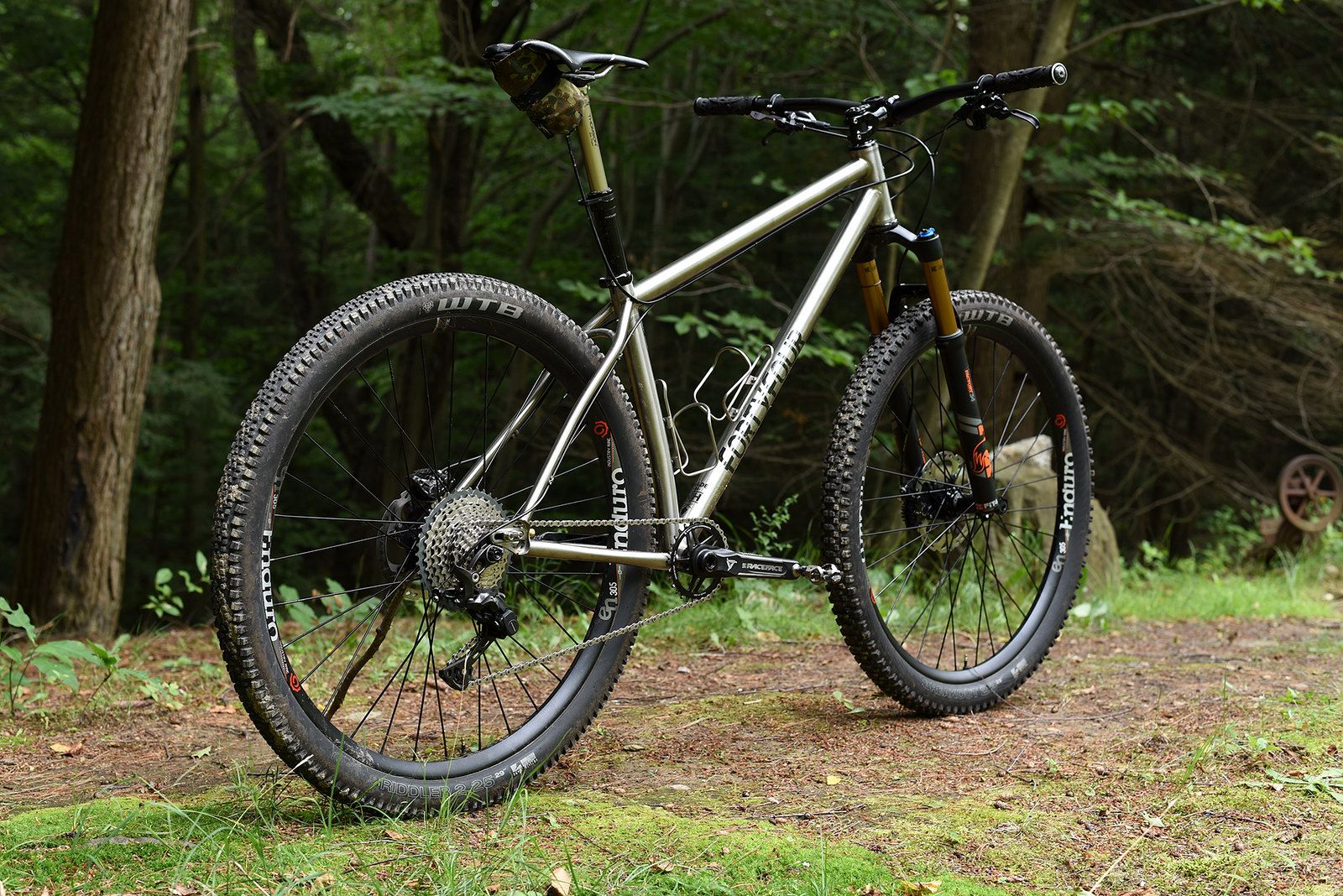 I try not to blow too much smoke with my blog posts but I am impressed. The bike really performs. I feel like there’s been new doors and possibilities opened with this one and it’s all centered around this existing standard of 83mm bb shell with a 12x157mm TA rear. This opens things up for tons of tire clearance and many advantages in wheel size and tire size options. The run down of options on this bike are 29 x 1×11, 27.5+ x 1×11, 29 x SS, 27.5+ x SS, and room for a 29 x 2.4 – 2.5″ and 27.5+ x 2.8 – 3.0″. Now do any of those configurations and you’re looking at so much potential in this package. Don’t even get me started on the bike packing possibilities too. The options just don’t end there. I can build these out of steel too with loads of options and configurations either dedicated to one wheel or two two. There’s still lots of work and rides to be had though with this next iteration of my mountain bike before I open things up in Titanium which to all who are reading and waiting for Titanium, I will be doing model releases. Not a general material release. First the Huntsman (which is dialed…) then the Marauder. And something 3rd is up my sleeve but much later. To be continued in many ways.

Till next time: Stay stoked and keep pedaling.

Posted in Builds, Opinions on all things Bikes.
Share
PreviousLyme Literate
NextInto the Weeds with the Marauder Ti