This past spring I had contacted John Watson about sending him a bike for review. He was down so I scheduled the build to arrive at his doorstep in July this past summer for him to begin the review process. Being that this was formally my first bike out for any sort of test or review, I wanted to give John the best possible experience out on the trail. That meant taking him through the custom process. It did not make sense to build a bike that was fitted to me or pick a common size that I could sell at a later date after the review. John just wouldn’t get the most out of the time reviewing the bike with compromises. Not to mention I build custom bikes. So it only made sense to build the bike like this was his bike. No compromises.

So we began the process just like I would with any of my clients. We exchanged a handful of emails and conversations about his riding style, the terrain he rides, his preferred setups and much more. I already had a pretty good idea of how John rides through his stories via his blog The Radavist and many of the photo essay’s he’s published. But as I mentioned above, I wanted John to have the best experience out on the trail – one that would reflect his own style but let him push things to the next level all the while having the bike ride like I want my bikes to ride. There’s a fine balance to be achieved here. One thing worth noting is that I do indeed prefer a slightly more upright stance when it comes to fit. To achieve this and put that rider in the best possible position, I look at where they are now on their current bike, check contact points and then compare them with some measurements of their person to see if there can be any subtle shifts to further dial in the fit. The end result and my goal is to have the handlebars and saddle height about dead even. If there is a little saddle to bar drop, that’s ok but what I’m looking to do is eliminate that discrepancy. This along with a few other factors of the fit and more important, the geometry and setup of the bike start to establish how the bike will perform as a whole out on the trail.

You see, with a slightly more upright stance, you still can climb. You’re in a comfortable position to put the head down and pedal. Drop your elbows, flatten your back and put the power through the pedals. But when it comes to technical lines, rocks, roots, big step ups or headed down hill, this stance puts you in that “ready” position. Now you have the ability to move, get off the back end of the bike, hover, compress and basically throw the bike around while “centered” and “IN” the bike. So I put all that knowledge into the design of his frame and spec’d components that I thought would best suit the demands of his terrain and riding style. So the geometry and spec reflect this sentiment. But all the while, I’m balancing how I want the bike to ride with nods to John’s terrain and riding style. The end result hopefully is a bike ready to push limits. 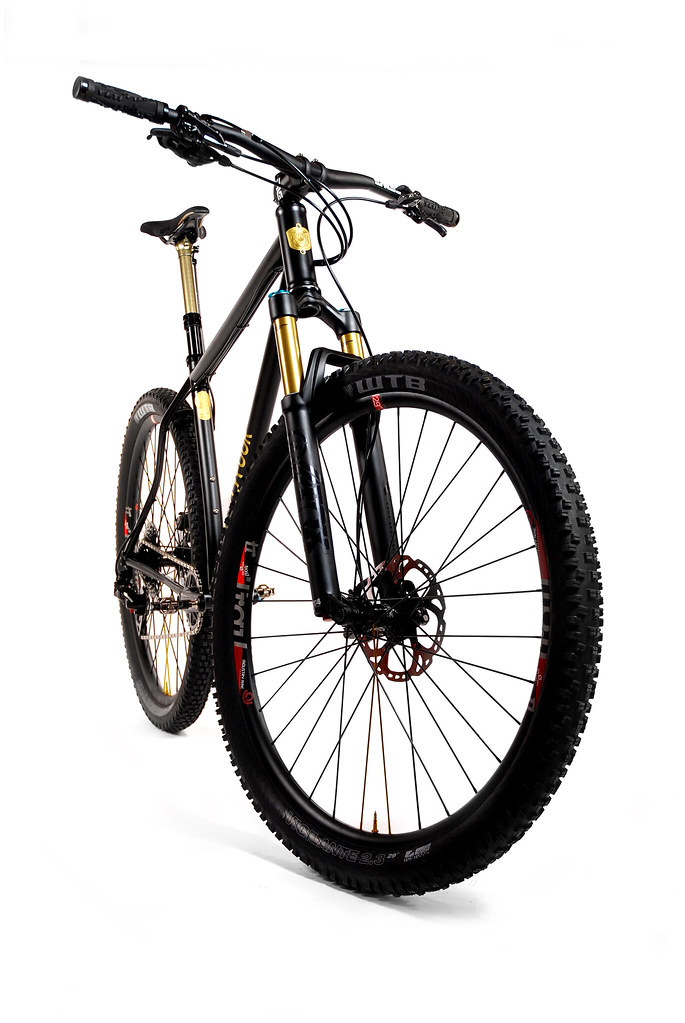 Spec wise, I reached out to a handful of my OEM accounts including: Cane Creek, ENVE, Industry 9, WTB and Wolf Tooth Components. I filled in the rest of the blanks with a Thomson Dropper (30.9mm), Race Face Cinch Turbine Cranks, X1 Rear Derailleur/shifter and cassette, Shimano XT M8000 Brakes and ODI lock-on grips (Yeti Hardcore!). Also, I spec’d a 2016 FOX 34 Float, 120mm FIT4 fork and murdered it out with their heritage kit. To me, these are all components I’ve ridden and put to the test. I’m confident how they all work together and I knew these would be well suited to the terrain and riding style John was going after.

Close up of the Drivetrain: Close up of the Business End of the bike: Geometry wise, this is where the magic (for me) happens. This is just the result of riding, building and repeating that process a lot. I take the direct feedback I’m getting from the trail and make adjustments to dial in how the bikes handle year after year. So when someone comes to me with specific requests, I can make subtle tweaks in the geometry to meet those requirements but also keep the bike “feeling” like I want it to feel. John’s Marauder sported a longer top tube length with short stem combination, 69 deg. head angle, a 72 deg seat tube angle (This actually puts the saddle in about the same spot as a straight seat tube that is 73 degree’s – the radius kicks the seat tube centerline forward a touch, so to compensate for that loss of set back, the seat tube angle is slackened to 72 degrees), 2.25″ of bb drop, and a 16.5″ chainstay length. That’s 419mm for all you metric people out there.

One thing to remember about geometry: No single number is king. It’s all about how all these numbers work together. One huge point to notice? I’ve not mentioned anything about stack, reach or trail. According to my opinion, these are nebulous numbers invented by the industry to try and decode geometry questions and are talking points on a bike shop show room floor or things to argue about on the internet. Reach and stack are most likely “slightly” helpful, but even reach doesn’t really tell you where your butt’s going to land on the saddle and stack has nothing to do with where your inseam sits when hovering over the bike. Trail? Don’t get me started. That number is constantly changing as a suspension fork goes through it’s travel – tire choice, tire diameter and tire pressure has more meaningful results to the rider out on the trail and those are all things that you can easily measure, change AND experiment with in real time and feel how they make a difference. The big numbers for me are cockpit length (saddle tip to center of the handlebars) and saddle height (center of the bottom bracket to the top of the saddle). Those two measurements are key for establishing your fit and where the heck you are from one bike to another.

Editor’s Note: I will say, however to counter my above statements, and not make anyone out there choosing a new bike despair, out of all the jargon thrown around these days, Reach and Stack have the most meaning to the consumer to establish fit for production bikes when comparing one bike against another. That is an important note to make. But (and that is a big but) since I am considering how the bike will perform ascending, descending and pretty much everything in between, I need more than just reach and stack… I need to know where the saddle is in relation to the handlebars. I need to know where the saddle is in relation to the bottom bracket and the pedals for that matter. Where are the handlebars in space? Where’s your butt in landing in space? Center of the bars to the saddle tip? Saddle tip to junction of seat post clamp? Stem length? Stem Rise? Handlebar width? Number of spacers below the stem? Stack of the head set? Axle to crown measurements? Head angle with sag taken into account? Head angle, travel of fork and sagged fork numbers and how does that effect the height of the head tube in space? Etc. Etc. Etc.

For me, since I am considering the bike for an individual, and the vast majority of my mountain bikes have to perform both equally well climbing as they do descending, I have to get more specific than just those two measurements. No one measurement is king as I stated. It’s a combination of measurements and angles that cumulatively depict how a bike will feel on trail and that includes standing AND while seated climbing. The take away for this editors note is that I am sweating all these details and I have had clients who just felt strongly about a very specific target number (say a client has a preference for a specific reach measurement). I actually do listen to my clients. They tell me what I want and I build them what they need.

Here’s the party end of the bike: Once the bike was finished, we arranged delivery to occur at Golden Saddle Cyclery and we were off and running for the review. Halfway through the summer and well into September I’d see the occasional photo or be tagged in the occasional ride shot. No review yet but as I like to say: No news is good news. I’d check in with John every once in a while and he sounded really busy but totally stoked. A little more time passed and I received a reply asking if he could keep it well in to October/November? No problem! Better to have that bike in his hands really putting it to the test than have it here at 44HQ. Here’s a shot courtesy of John Watson all nice and dirty – these are the kinds of shots I like to see: 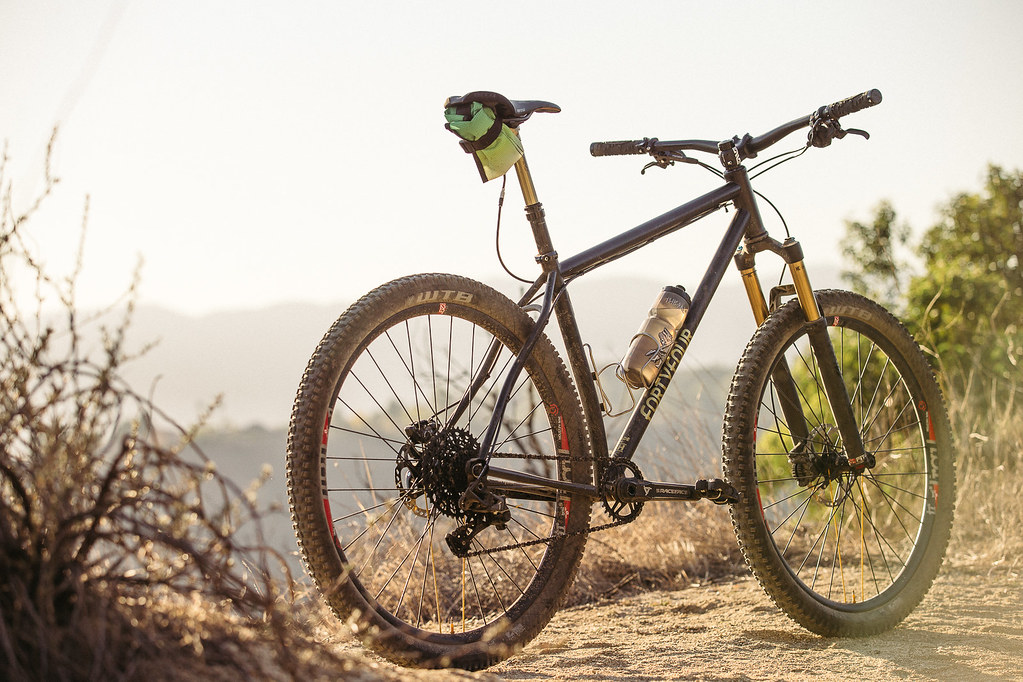 Just yesterday, to my surprise while taking a break from welding up another Marauder ironically, I saw he had posted up the final review. Super stoked over here in New Hampshire! You can read all about his thoughts and see the entire photo essay at the Radavist here. A big thank you to all my OE’s who helped provide hand picked product to round out this build: Cane Creek, ENVE, Industry 9, WTB and Wolftooth Components all deserve praise for their kindness and support. A huge thank you to John Watson of the Radavist for actually answering my email and request to send him a review bike. John’s a good guy, talented photographer and can shred with the best of them. I’m stoked to have him review one of my bikes (and it appears maybe even own one…). Thank you to Golden Saddle Cyclery for taking on the task of holding the bike and building it while John was out of town too!

Earlier this year I had put together a process look book of the build above, and here are a few links if you want to see more in detail as well as see the process via Flickr:

You can download a high resolution PDF of the 44 Bikes X Radavist Process Book here.

And… you can view the build set at Flickr here.