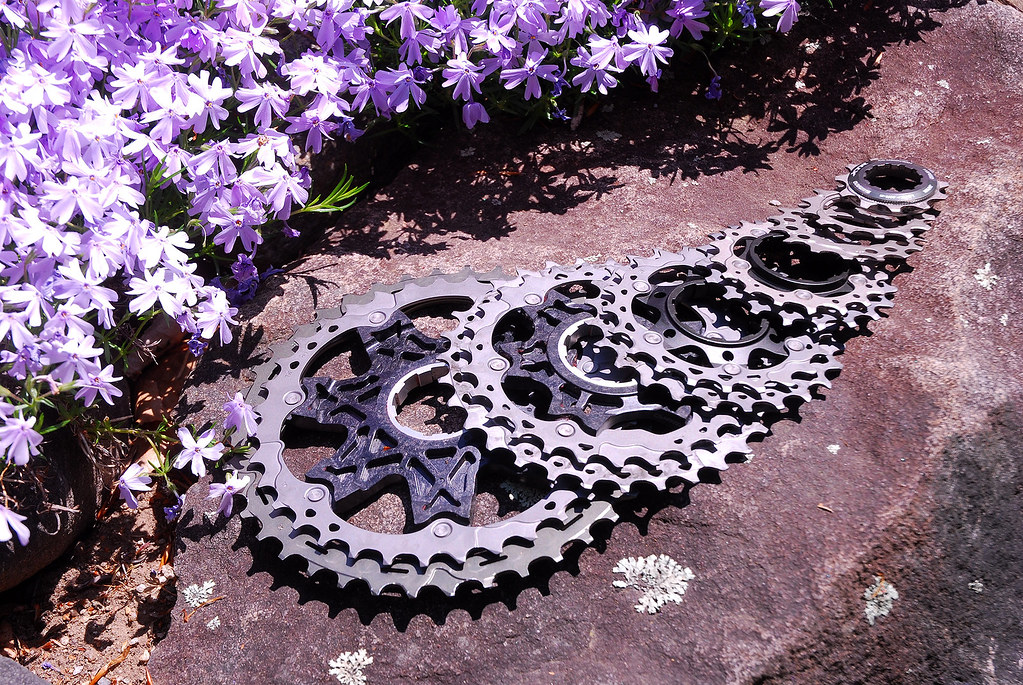 So I’ve been digging the new XTR M9000 setup on my trail bike. I wrote about this in a Shake Down ride post earlier, and you can read about that here. First ride out the cassette was (and has been) giving me some problems. Up above I’ve broken down the cassette so you can see how it’s divided up. The two last sets of cogs are on carbon spiders. The two next sets in line are on aluminum carriers and the last 3 cogs are all separate with an aluminum lock ring. The two groups of cogs on the carbon cassettes have integrated alloy splines which is a really nice touch. The only problem is that there are a series of flat spots where the cogs are riveted to the carriers which don’t technically touch the cogs, but they are extremely close to cog and carrier. Under load, these can touch I’ve noted. The spacing between these two cog sets are also separated by carbon. So carbon on carbon under load = one hell of a racket while pedaling up hill. I’ve read others who have experienced the same problems in terms of noise level. My noise was very specific to the transition between the 31t and 35t cogs, so right at that break between the two carriers. I spoke with Shimano Tech Support and actually emailed my local Tech Rep. for New England and both were very helpful. Basically confirmed the problem and said my steps were on track to solving the noise.

I actually thought at first that it was coming from the cassette, but swore it off to “That can’t be, this XTR stuff should be dialed…” And blamed it on my cranks. Broke those down, cleaned, re-greased… noise still was there but now really coming from that transition. I read some people having luck with carbon paste. I have some but it’s mostly to stop carbon from slipping. Seemed counter to achieving the goal but figured trial by elimination was best. Well, that sort of worked. But the noise under load out of the saddle was still there. Speaking with Shimano Tech Support, they said go at it with grease. So I broke it all down, a 4th time, cleaned it well and greased up all the interfaces. No stone left unturned or un-greased perhaps. I also upped the recommended torque spec from 40Nm to 48Nm too. All back together and torqued down, long ride on Saturday: Not. A. Squeak. Today again (Sunday) and: Not. A. Squeak. So truthfully, that’s only 2 rides in on this. I’d like to put in a good week of riding before I give it the thumbs up, but I’ll go ahead and give it the halfway thumbs up. I believe this should fix things and keep it nice and quiet like it should be. But if anyone else out there is experiencing the same thing with an XTR M9000 cassette making noise, grease up all the interfaces (I used a modest coating), that includes front, back and all the aluminum bits too just to be on the safe side, and torque things down well, you should be good to go!