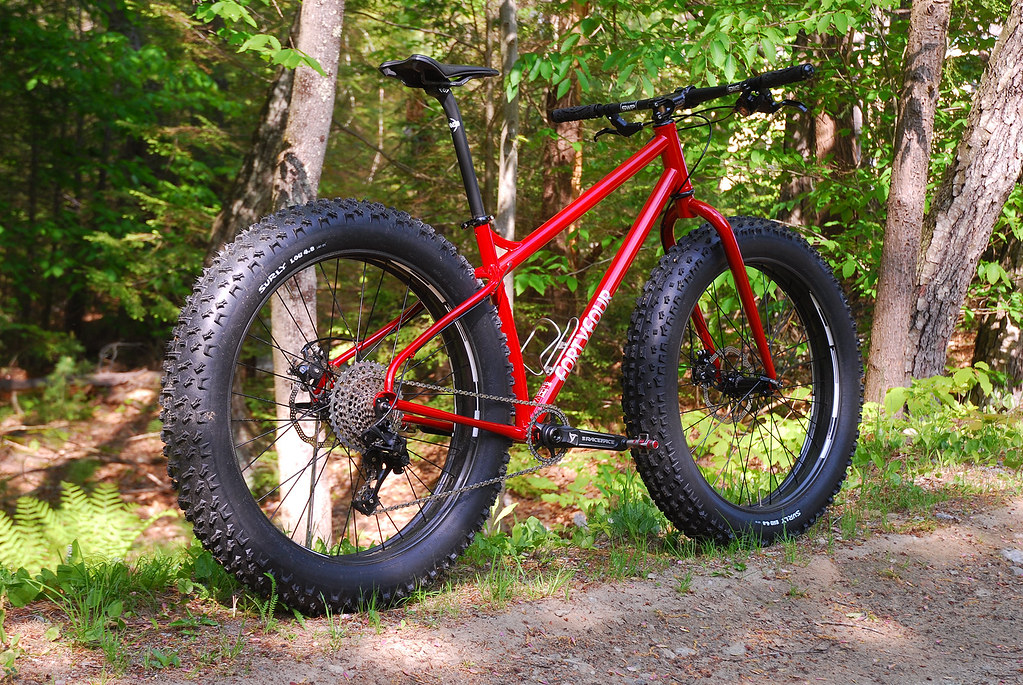 Technically this isn’t a full XX1 drivetrain review. At the time of the build, XX1 rear derailleur’s were out of stock at a bunch of my distributor accounts but winter was upon us and I needed a rear derailleur. So technically this is a review of a XX1 Cassette, Shifter and X1 Rear Derailleur. Basically the same thing. But up above is the setup I rode all through the winter of late 2014 and into the early spring of 2015 on my own personal Fat Bike. Chainring is a 28t Race Face narrow wide mated to a Race Face Turbine Cinch. You’ll also note that this bike is built with a 190mm rear axle spacing BUT I’m actually running a 170mm spindle kit. First ride out on the 190mm spindle kit and I have to say that the Tread was massive. So massive the bike felt completely and utterly dead in the water. Obstacles that I had to ride up and over were cumbersome because it just felt like the pedals were dead. No power. A quick conversation with a good friend and client in Switzerland confirmed that the 170mm axle kit would work A.O.K. with room to spare when comparing measurements between our similar builds (only his sports a 177mm TA in the rear). Swapped out the axles of the Turbine Cinch cranks and things felt so much better and basically back to normal. 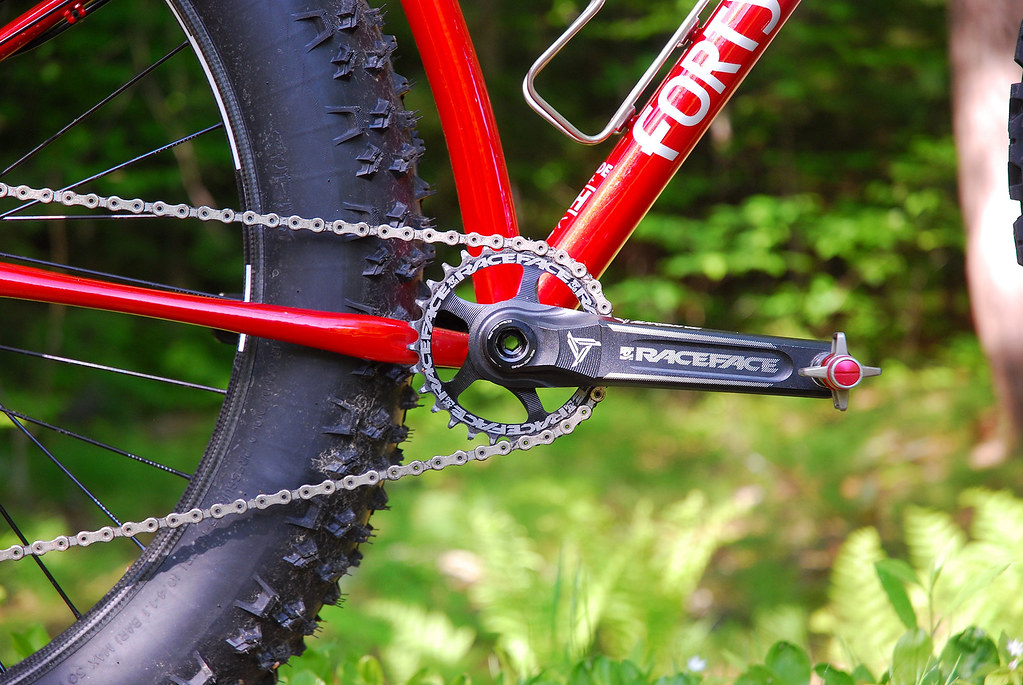 So on to the XX1-ish / Longish review. I was pretty excited to give a 1×11 setup a try this past winter. So much of the riding here in the North East in the winter, for me, is all about slow cadence, plodding along, deep in the woods, on single track but in DEEP snow. You can move along at a good clip, but honestly, a good amount of the riding is just slow and steady attempting to maintain traction the majority of the ride. Big 5″ tires with deep lugged treads are a must (Bud and Lou are the hot set up). I also moved from 170mm spacing to a 190mm spacing, and with that came HED’s Big Deal rims mated to Industry 9’s hubs: 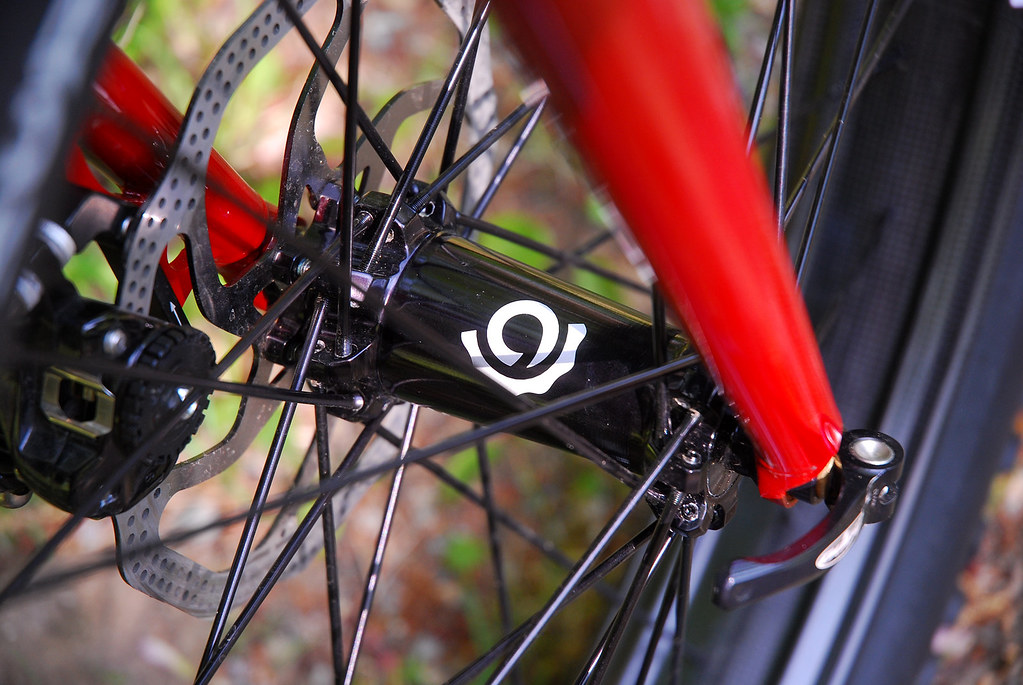 I kept things simple with a set of Avid BB7’s doing stopping duty but I’ve got a pair of Avid Black Ops levers.. possibly the SWEETEST pair of CNC machined mechanical brake levers you can find. These suckers are buttery smooth. Yeah I know what you’re thinking: Hydro’s are so much better. But honestly, brakes just slow you down and I wanted a no fuss, NO CHANCE of freezing up on me setup. To put it plainly: It can get fucking cold up here in a heart beat. The weather can turn on you faster than you can kiss a duck too. So having a set up that won’t need fiddling with is a must for me. So cable actuated is the ticket: 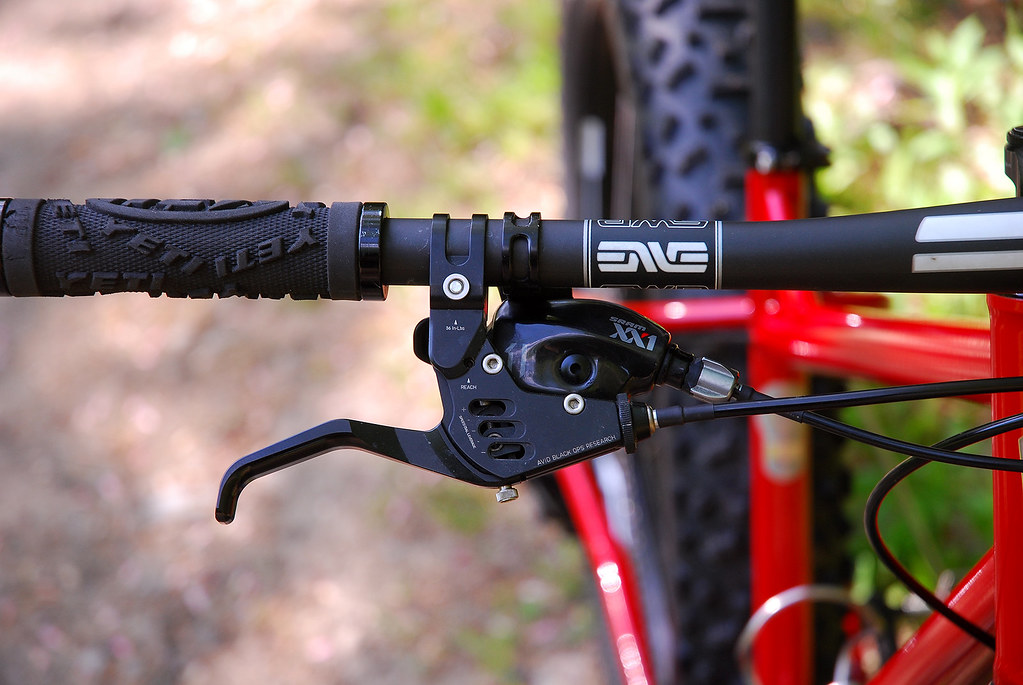 Note the electrical shrink tubing around the ferrules. That’s just an extra small step to lock out moisture. The lever body’s mate up nicely with the XX1 shifter body too with good room and clearances all the way around to get your set up and angles of both units dialed in. I like them close to one another and the start of the lever of the brake and thumb shifter lined up with the inside lip of the ODI lock on clamp. Just a thumb’s reach away. Sram’s XX1 deploys a “push-push” set up to change gears. What’s kind of nice is when going down the cassette, you can hit the trigger rapid fire-like and snap into faster gears quickly. The throw has a nice smooth feel and the action has a nice POP I like. Shifts are crisp up and down the cogset, and the transitions are pretty sweet. My only gripe about the cassette is the transition between the second to last cog and the big 42t cog. Sometimes, moving down or up to this cog is a bit cumbersome. Compared with Wolftooth’s 40t Giant Cog or Shimano’s XTR M9000 40t cog on their cassette, I wonder or rather question that transition. It’s nice and lets you kick back, but sometimes that movement can be rough up and down vs the move from (for example) the 35t to the 40t on my XTR M9000 cassette is very smooth. Feels a bit forced perhaps on my XX1 cassette. I will say though: No creaks though when compared to XTR’s cassette. The cassette of Sram’s XX1 is pretty dialed. The XD driver is bomber and a pretty trick solution. But having that cassette be one piece totally eliminates any fuss AND you’re not enabling any of the cogs to mar the driver body. So positive and negatives when you put the two head to head. Deal breaker? Hell no! XX1 is one sweet setup: 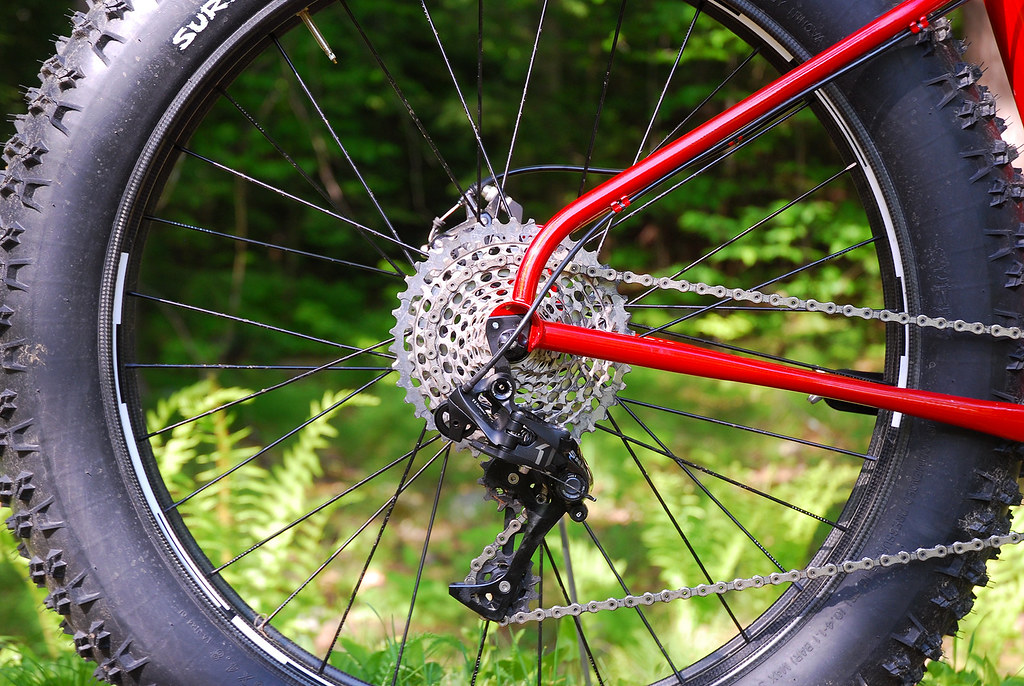 The X1 rear derailleur works pretty flawlessly with the rest of the XX1 kit. I like a mix and match style build to dial in each individual component for my needs. One thing I really love about Sram’s rear derailleurs is that simple cage lock solution. Swing the cage forward, push the button in, let the cage rest on the lock and WHAM: You’ve released tension on the system. Need to swap a chain? No problem. Need to pull the wheel? Call it D.O.N.E. So simple and one of those “Why didn’t they think of that before?” scenario’s… Cable routing is a bit on the rowdy side with looping through one part then wrapping it through another, but set up was relatively painless and I have not had to fuss with it after a full winter’s riding. In the snow and ice then early spring mud and muck, I did not drop the chain once. Chain retention is very good. The 28t chainring coupled with the XX1 cassette’s cog spread was a dream come true. Traction could be maintained, shifts were crisp and reliable and when I really needed to kick back and spin, the range was there.

Long story short: this is one kick ass set up. I’m currently building up another Singlespeed that will also take a 1×11 setup and that setup will be a 1×11 Sram X1 kit. Race Face Turbine Cinch’s on that build too. After a winter of riding in snow, I had a hunch that it would perform out on the trail here as well when the snow melted (just a hunch of course). So I’m looking forward to giving that set up a thorough thrashing but what will be interesting is comparing both Shimano’s 1×11 setup with Sram’s 1×11 setup. How both compare, what things I like and dislike, what one offers over the other. Basically there’s some method to my madness here AND I can now have two builds to bring to shows so I can speak to customers and potential clients all the same to give them the most in-depth comparison’s between both Sram and Shimano set ups, and have both set up’s on hand to speak to. That’s the goal: Give the client options and decisions based on first hand feedback out on the trail. Thanks for reading and till next winter… Here’s a parting shot: 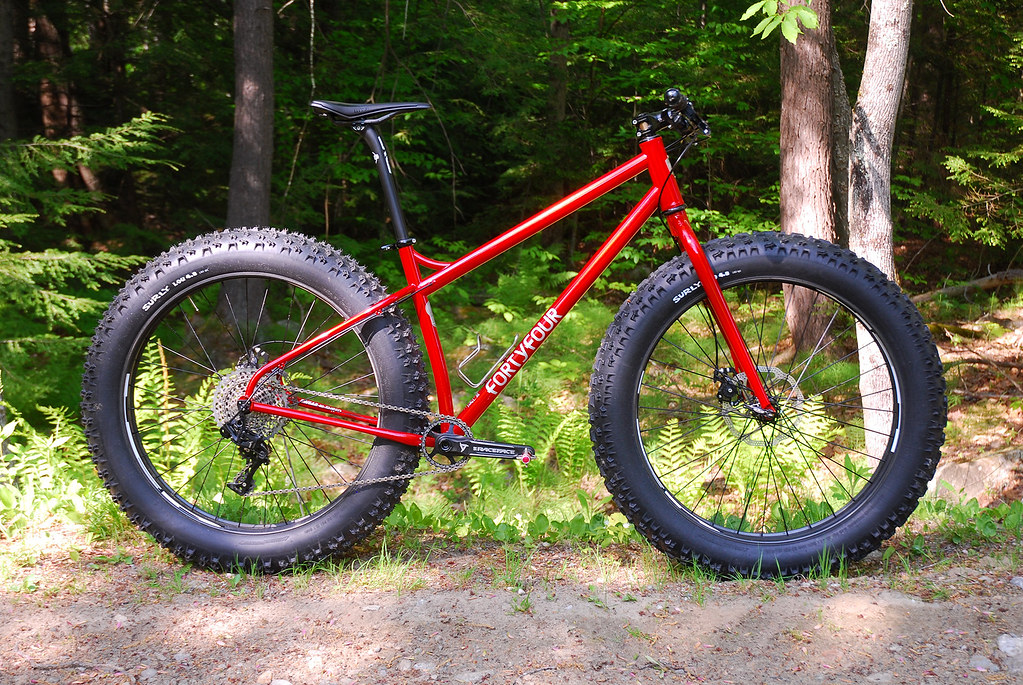