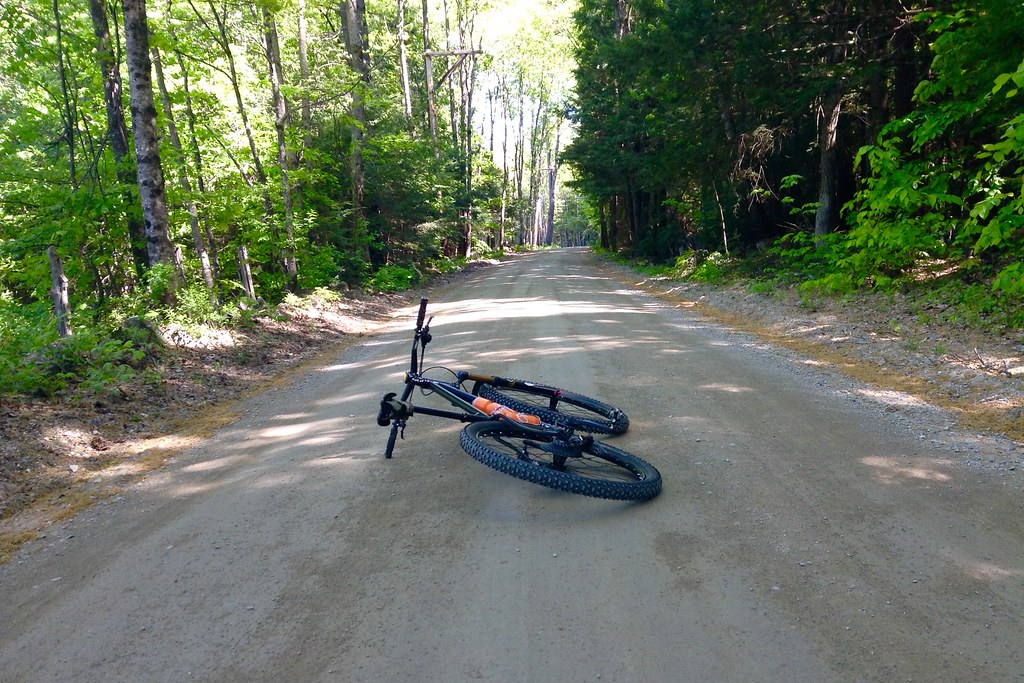 I try and get a longer ride in every so often. Well, longer for me vs the approximate 5 mile stomps I typically take at the end of each work day, which usually comes to about 45 minutes worth of riding. I made some calls but didn’t get any takers. No worries, they were to miss out. Ride starts from the front doors and in about 50 yards you’re on dirt roads pretty much till you come to the first trail head. My plan was to hook up two different spots I frequent (Affectionately dubbed “Dales Trails” and “Sayers Loop”) and then, head over to Sheldon’s neck of the woods in search of his new trail.

I bump into one of the land owners every so often who is an avid mountain biker and we get to talking. He’s got a pup with him too (Kody, sp?) who loves to ride just like my own. One thing special about the local trail network is that it is largely composed of private land and for the most part, the lions share of the trails exist only by permission of the land owner. That’s special, so I’m very careful and respectful of the trails I frequent. It’s not uncommon to bump into the land owners out for a hike on the trails, of which Sheldon’s one of them.

So back to the conversation: One of these conversations last fall had him talking to me about his “new trail”. Well, a few new trails he was working on. First of which skirts some fields, balances on top of a rock wall for a stretch, then enters a sweet down hill stretch that in the fall has a stunning view through the trees. Shred or take pictures? Sometimes it’s tough which one to choose. At the end of this DH run, there’s a massive boulder he built a ramp up and over for the final touch. So we’re talking about said obstacle and Sheldon mentions “Hey, did you notice that little side trail off to your left after the boulder?” I said I actually had. Well long story short, the trail was completed this spring and he deployed the help of the GTA to haul in 6 new bridges. I counted 7 when I rode it yesterday, but perhaps one was already in place! So the plan was to finally get over there and check this new trail out. It’s not out of the way, but it takes you far away from where your car is parked if you drove to the trail head.. So this makes for a perfect link up if you ride to the trail.

So enter single track at Dale’s which is heavily forested by hemlocks. Trail is a bit on the soft/loamy side. This is just fun, fast twisties with some spurts of tech. Really a nice warm up to get you through that first piece of trail. I do most of this trail network with a few exceptions, then head out on a trail dubbed “Get R’Done” which is composed of lots of rocks, rock work that forms some bridges, a hand full of obstacles, sweet rollers through and over rock walls, and a bunch of bridges which lead you out and over some railroad tracks to eventually link back up with the second trail head “Sayers”. 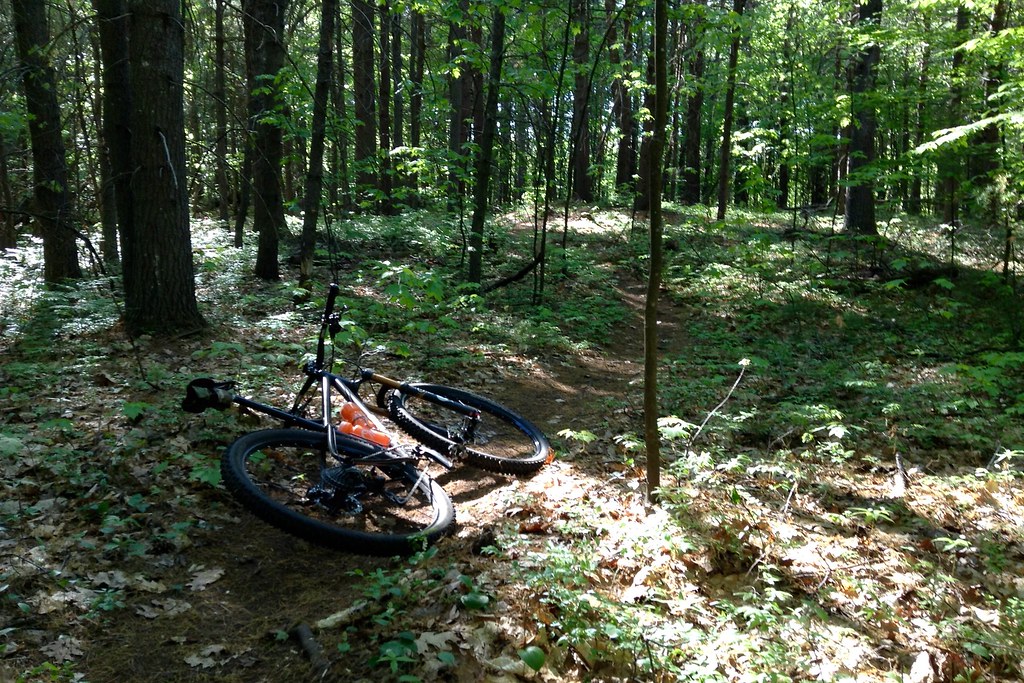 I picked a fun route that takes me on some select down hill twists that lead into good climbs and more single track that has nice flow. I’m thinking if I ever lead a ride from the shop, some of this 18 mile loop will be on it. There’s some other sections I’d want to include to extend it into the 20 mile + range, but it’s a good balance of fun, tech, going down and headed back up to the top.

Back to the ride: If I ever do this loop or similar, if I’m going to get tired, or start to feel tired, ironically it’s always deep in the woods at the base of a long series of climbs that gets you to the top of Sayers Descent. Sure enough I was starting to tire in that same spot or at least feel the effects of technical terrain back there. But it’s a beauty of a spot, The Stoke is High, and reminding myself that new single track awaits keeps me motivated for the effort ahead. Some food and water and the long climb out is finished. Being the picture perfect day it was, I couldn’t NOT head over to a field near Sheldon’s home for this view: 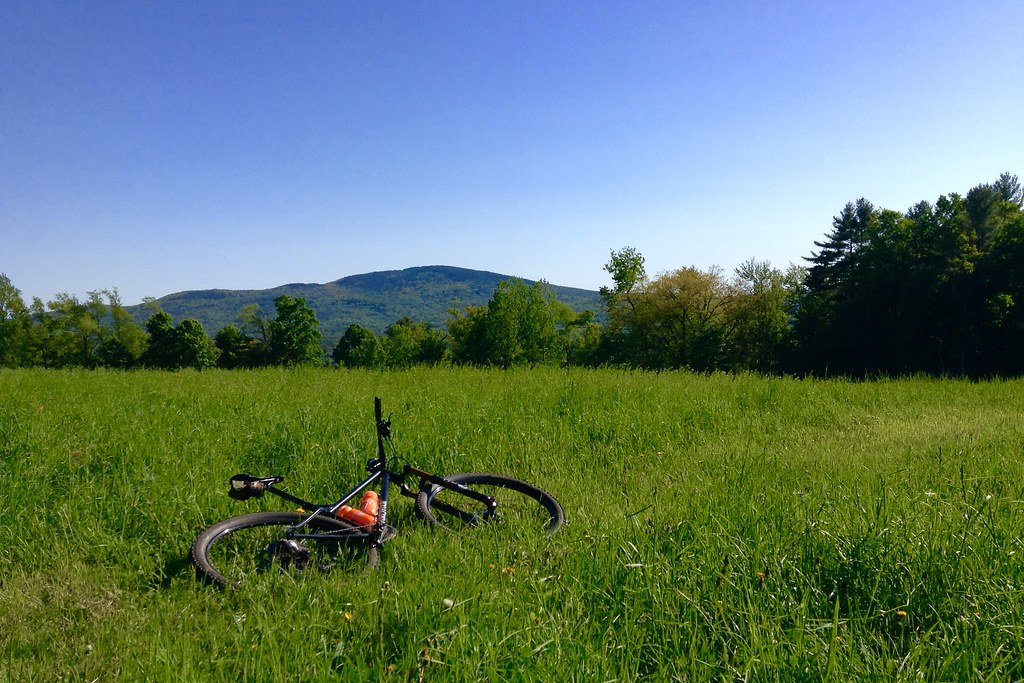 If that doesn’t make the whole ride worth it I don’t know what does! Not too shabby for some little town in the middle of no-where USA. (And approximately 4 miles from 44HQ) So here’s where the 14 mile effort so far leads me: a sweet dh run and into new trail exploration. Dh run done, and I stand upon the threshold of new buff single track: 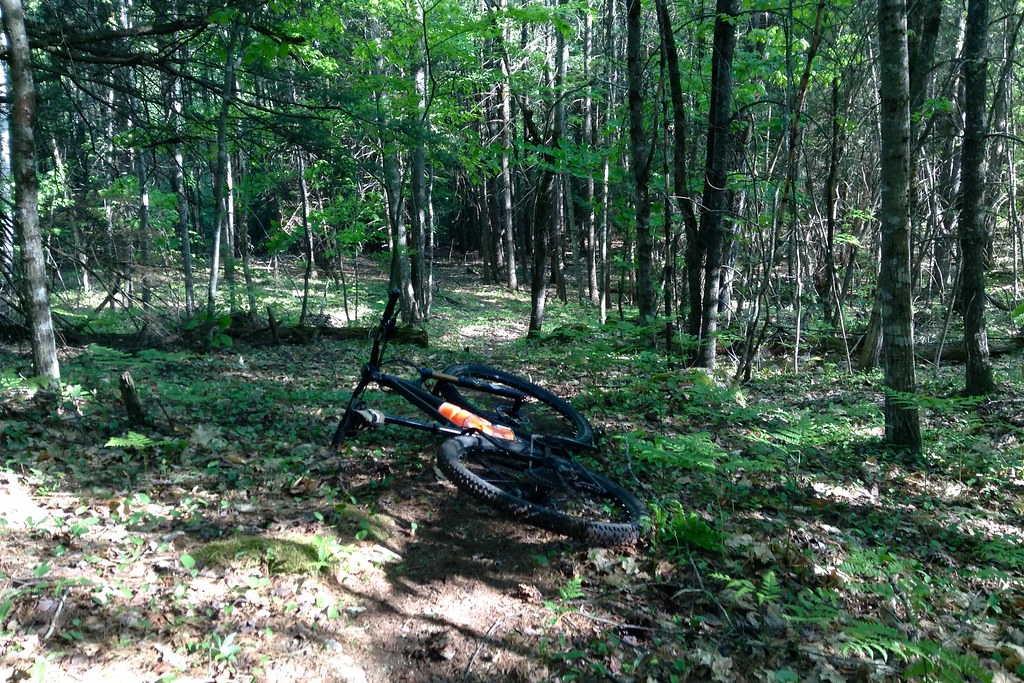 All said and done the loop turned out to be exactly 18.1 miles. I’d like to add in some more goodies to up the miles into the 20+ mile range. That, for me, is a good day on the mountain bike here in NH. I sometimes forget when I see other pics of epic rides elsewhere that others easily ride 20-30 miles more than that. Maybe even more? I know I’m beat to heck and tired to boot when I’m finished and it’s only 18… But it’s a fun ride and that’s all that’s what counts when I ride. Miles or Smiles? I’m pickin’ smiles. And I have to hand it to the Greenfield Trails Association (GTA). What a dedicated bunch. I’m spoiled rotten for their efforts. I counted 7 bridges on this new trail and mind you, this trail is NOT exactly accessible from any point so these monsters had to be muscled in some how. So my hat goes off to all those volunteers in the GTA and all the landowners in our area that allow them to build trail on their property. That’s special and I am reminded about the effort, time and permission from all those involved to make for some very special single track right from the shop doors. So when I say #spoiledrotten, there’s a reason. Hope everyone’s getting out on this Memorial Day Weekend to Shred. It’s another fine day today so load up and get out…