So a while back, I received an email from Wilderness Trail Bikes: We’ve got a set of Nano 40mm’s with your name on them… What’s your address? Giddy up cowboy! Long story short the good folks at WTB were looking to get a bunch of different riders from the “industry” on their new reissued Nano’s in a size 40mm width. Not every day I’m asked to review some kit so I was pretty stoked they considered me. They arrived at 44HQ compliments of the Man in Brown. All work halted and on they went. 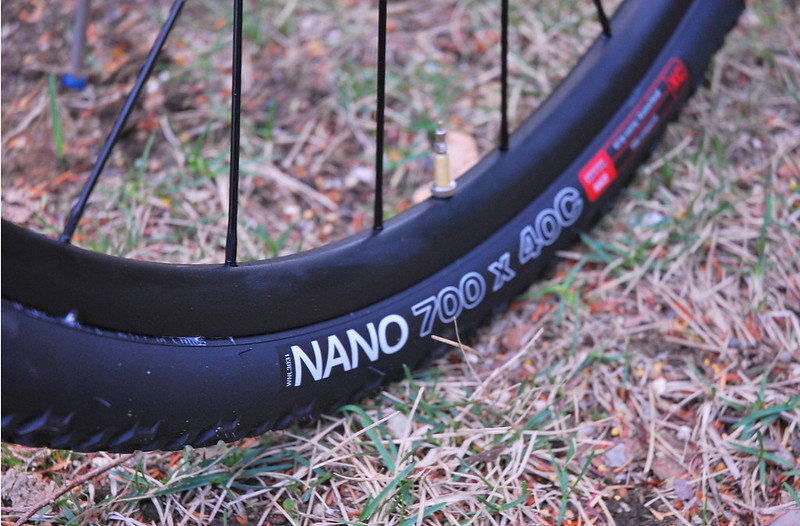 They replaced a set of Stan’s Raven 35mm’s. One thing about the Stan’s Ravens: great tire at the 35mm width but a ROYAL PITA to set up tubeless. And this is a set of tires coming from THE tubeless supplier. They fit very loosely so it was pretty tough to get them to seat and take air. I finally had to build up the center section and add enough sealant to get them to seat. But I digress… WTB Nano’s are not technically tubeless tires. The pair I received does not carry the TCS monicker. However, I set them up tubeless regardless. After a little bit of nursing them with air for a day or two, they are now completely holding air. But the prospect of not setting these up tubeless, and returning to tubes was just too great. Hence going tubeless. Once you go tubeless…

Here they are set up on my personal Huntsman: 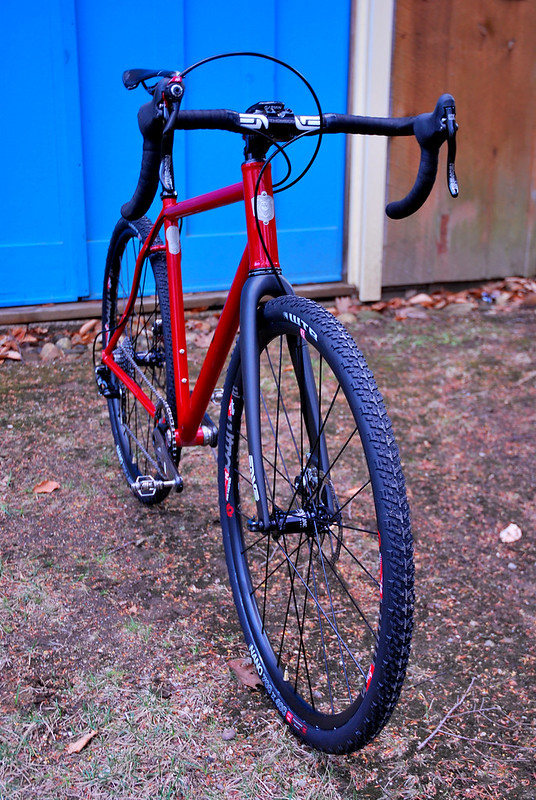 You’ll take note of the tire profile which is on the round side. Knobs are tightly spaced and the tread pattern is identical to the set of 29er Nano’s I’ve got in my tire collection which are a set of 2.1’s. The bike I built for myself I made sure I had ample room for different tire sizes as more and more tire companies seem to be going bigger. I found the switch from 32mm to 35mm a game changer. That little bit of extra size really makes a huge difference in the comfort department as well as the stability department as well especially with the roads I frequent around here. Not exactly typical with little to no pavement on most loops. And the pavement that I do frequent is a mess. Winter was not kind to the roads here in NH. So you can see in the pic below, I’ve got these mated up to a set of Industry 9’s Ultralite 24 hole wheels. These are actually mountain bike wheels with a weight limit. Speaking with I9, they stated I’d be fine if I was doing dirt roads and CXish type riding. The Ultralite’s came tubless compatible too. 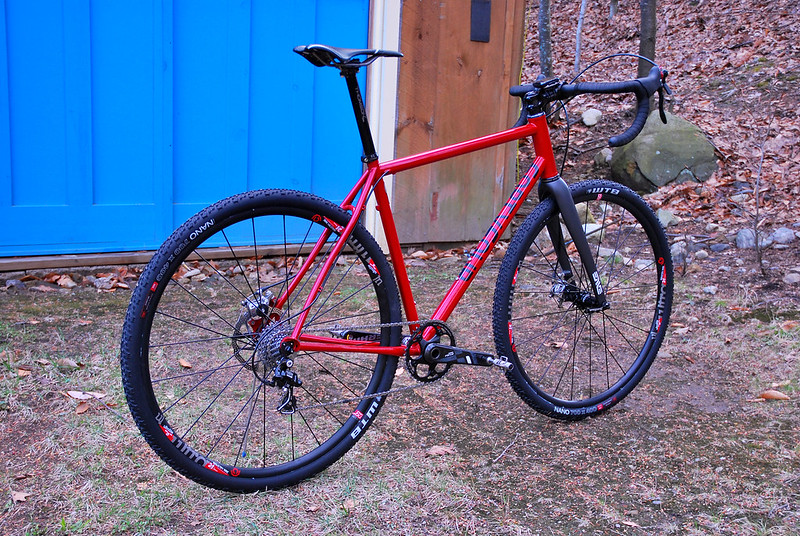 I always thought these would make a great set of 700c tires, and they do not disappoint. I’ve got a bit of time on these now. Long story short: I love this tire. It’s fast rolling on hard pack and most every condition. They are a touch louder than the previous 35mm tire, but this is a big tire by any standard. Not to mention the I9 driver is loud. I love it. None of this silent crap for me. A touch more rolling resistance is to be noted as well – not too much more but I did notice. The big eye opener is how much speed in rough terrain you can carry. One particular loop brings you down a freshly graded gravel road here in Lyndeborough. Normally, I’m checking my speed along this descent. I was blasting down this hill, looked at my GPS and noticed I was over 35mph. Didn’t even have the finger on the brake at the ready either. These tires carry confidence too. That larger paw out front and back just hook up. One thing I’ve noticed with both my 32 and 35mm tires was they had a tendency to skip a bit while climbing in loose terrain. They also bounce a tad as you’re descending to the left and right as they skim across the surface of the gravel and ruts. Not the WTB Nano’s. Climbing: They stuck to the ground. Descending: They stuck to the ground. Not sure if it’s that added size (I’m leaning in that direction) or the tread or both. 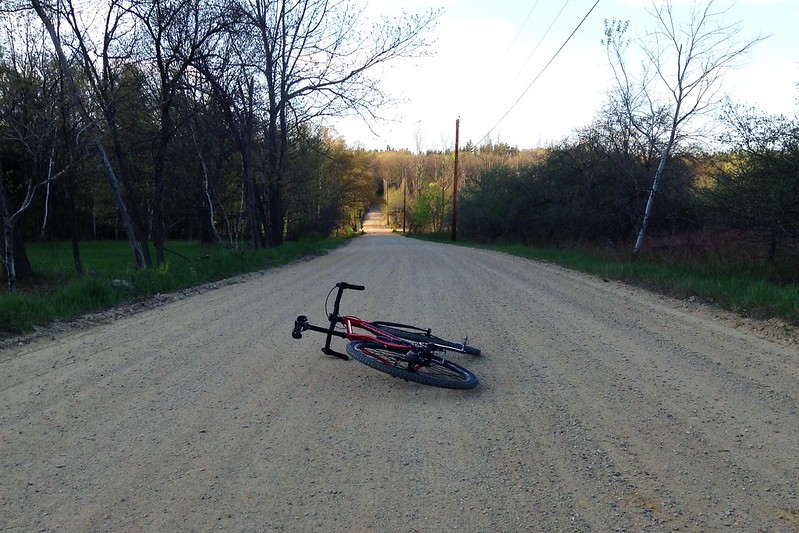 Sticks, stones, holes. I’m riding up, over and hopping anything in my way. That’s the thing I love about riding bikes with knobs that touch dirt: You get to play. You’re not static just pedaling. 2 hours into a ride on pavement and I’m ready to do something else. My rides have variety in terrain and I will say that the WTB Nano’s really heightened that experience. I can see how these tires can open up some possibilities for some 6th class roads that typically, would not really be passable without white knuckling your way through keeping your fingers crossed that you’re not going to flat. A flat, in the woods, in the spring… during bug season in NH IS NOT something you want to happen. Ever try changing a flat while walking or rather half running in circles so the mosquitos don’t eat you alive? I can see these tires coming into play here – most of the time in the winter, roads like these are snowed in. Early spring they have mounds of snow at either end of them from the plows. So late spring when things thaw out, you’re getting the itch to do some exploring. My hunch is these tires are going to take me there. Pretty stoked about that! 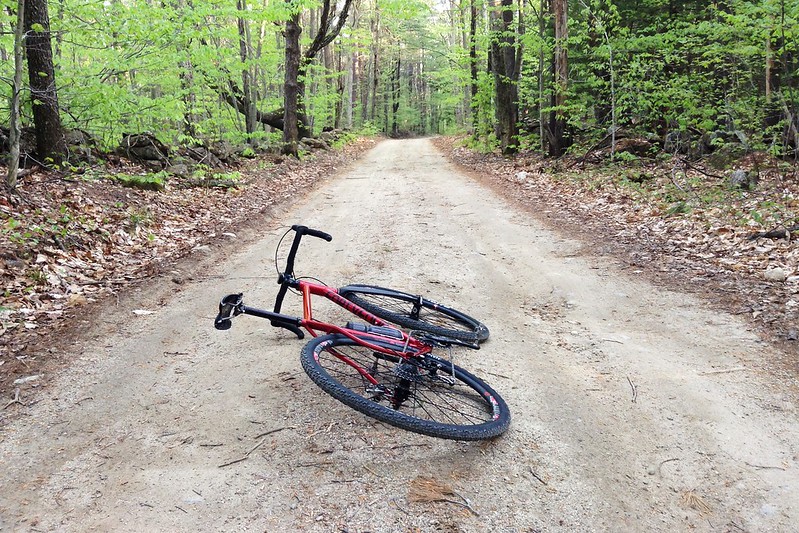 I’ve gotta hand it to WTB: I used to pretty much only run their tires. Tubeless came along and what I did have (Exi-Wolves and Weirwolves) were not tubeless tires. I’ve moved on to Schwalbe’s offerings but I’ve been looking for a smaller knob profile recently. These WTB Nano’s have really turned me back onto WTB’s offerings and I’m looking forward to giving some of their other tires a go on my 29er.

But if you’re looking for something in a larger volume CXish profile, which will get you “out” there and on roads less traveled that excels in hard pack, loose conditions and gravel, definitely check out WTB’s Nano 40mm’s. I’m loving mine and I have a hunch you’re going to like them too. Definitely put them on your list of new tires and check them out here. Thanks again to Will at WTB for sending me these tires!