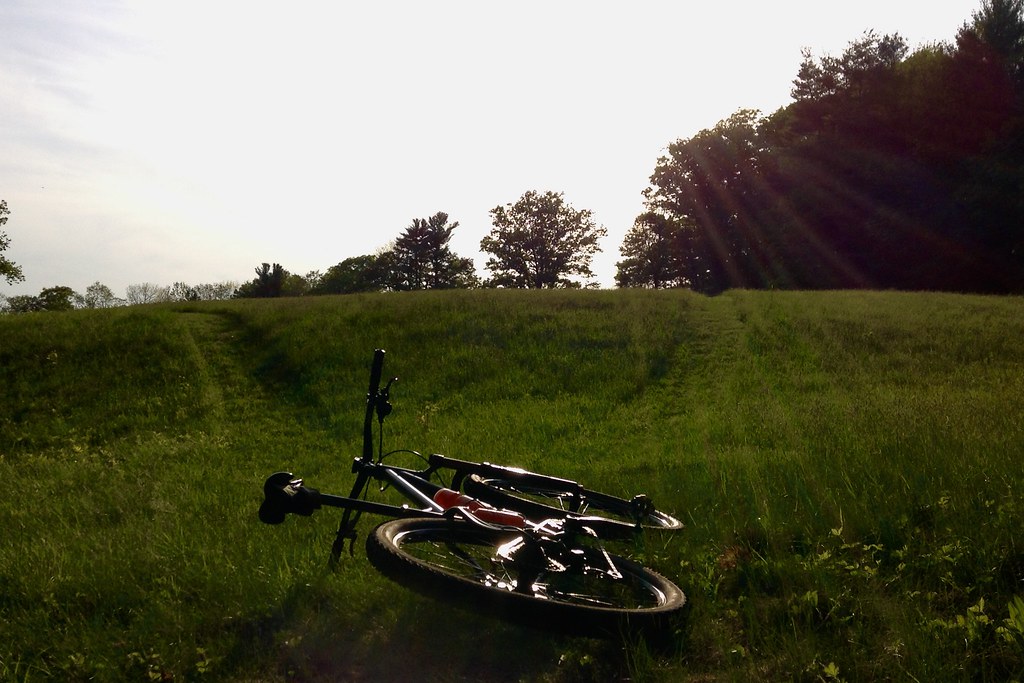 The majority of my rides happen at the end of the day. I try and get out earlier on the weekends, but some times I get out later yet again on the weekends. Today, well.. that was one of those Saturday’s where the day went by and I still hadn’t managed to get out the door for a ride. I was building up a new single speed most of the afternoon after doing some chores around the house. The plan was to build it, and take it for the afternoon ride. Well, the rear brake line needed to be bled and of course… when I stood back and looked the rear brake line was “just too short” for my liking. I had a brand new spare, (2 actually), so off that one came, and on went one of the new ones. Bled, reassemble and brakes aren’t working now.

Oddly the pistons were moving outward on their own. Odd indeed. I looked at the Shimano housing number and compared it to the old one. Crap. Turns out that new line was NOT the correct one. The remaining line was unearthed, fingers crossed and it turned out to be a match and the right length! That worked out but in the process, I disassembled, bled, reassembled and disassembled everything 3 times.

That sucked up a lot of daylight. Not to mention the Wolf Tooth Cinch chainring did not want to play nicely with my chain’s half link, and the proper length was really long. More daylight gone… I decided that this bike was finished, but not ready for it’s first ride just yet. So out came the trusty 1×11, I donned riding gear, got my pup Kaya all spun up about a bicycle ride and off we went.

I decided to do one of my typical shorter loops (daylight was limited), but I decided to do it in reverse. More climbing but that’s ok. Some of the climbs in the other direction turn into really great technical down hills. Some of the lines take some concentration. Kaya was all excited and ready to shred. There’s something special about riding with your pup. Mine just loves to go for a bike ride. We share that in common immensely.

Loop done, hills climbed, descents descended and I finished the loop in the field above. A good “think’in spot” I’ve found it to be. Not to mention Kaya loves running around the tall grass sniffing and poking around for critters. It’s fun to just stand there and watch her bee-bop around the field and look at Mt. Monadnock in the distance. Sun on the horizon. Dead quiet. When we entered the field, this quiet really held my attention. We passed a Turkey to our right, who got really low and gave us the stink eye. Kaya didn’t see him (she doesn’t actually see so well in low light…) but it seemed she had other things to sniff. The hill rolls up and the trail follows it and splits for two ways across the field. I typically take the high road to get a head of steam for the rock wall leap that sits just inside the tree line.

Well, as we’re rolling out into this quiet, I soak in the sounds or lack there of. I’m watching Kaya in front of me speeding along. I can hear her feet on the ground and grass. I take notice to the similar sound I’m making with tires on the grass behind her. She rips off close to the top into the tall grass to check out the critters. I stop and watch her. It’s all so simple and pleasing. I find in this spot, it’s easy to relax and just observe. Admire my surroundings. Talk aloud to kaya about “What’s that over there” or “Go get ’em!” And off she goes sniffing and poking about. Simple. Pleasing and refreshing. Some times the rides don’t have to be long. Some times they can be short and sweet. Simple. It was a great ride.