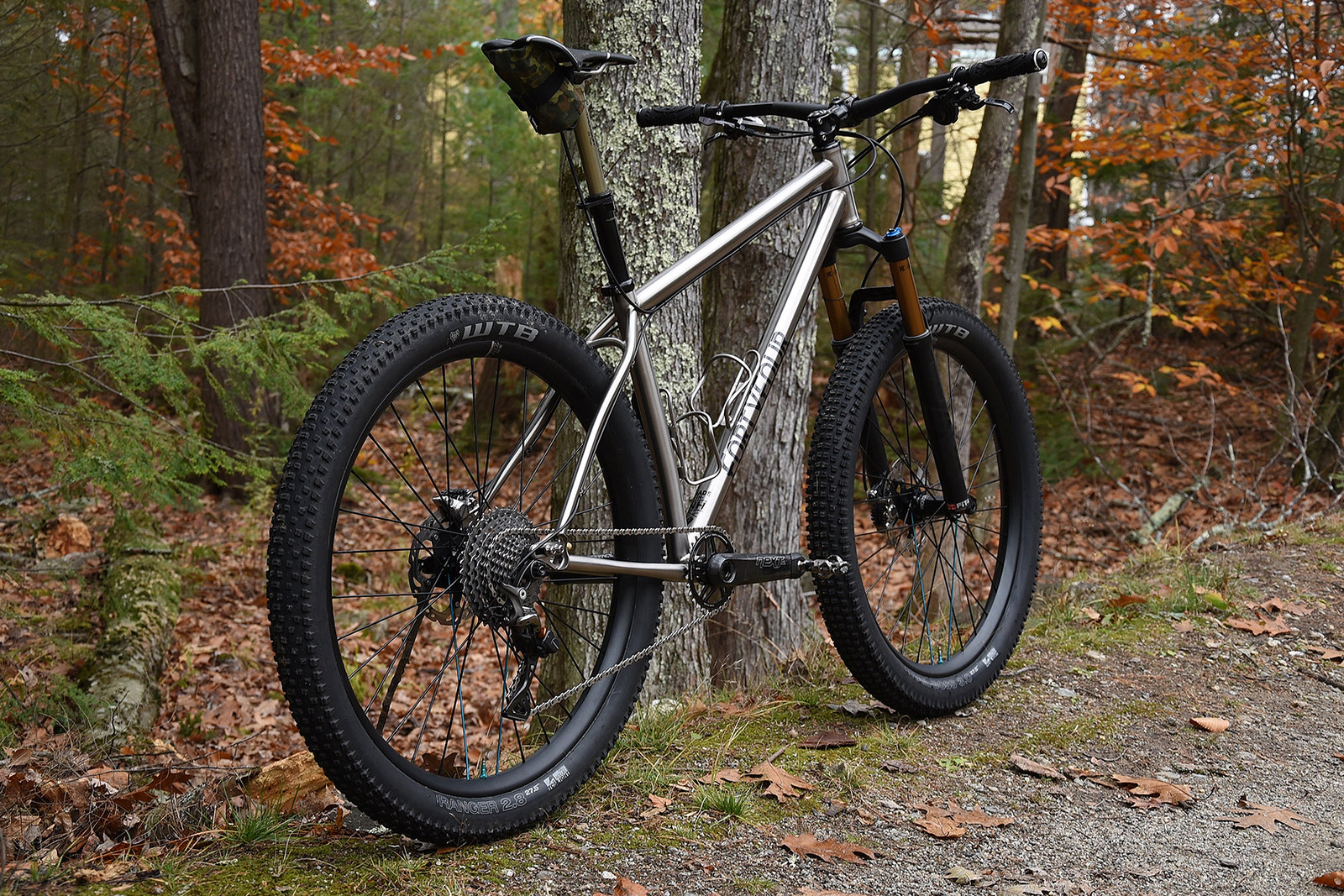 Earlier in the year I put together a post just after completing the next iteration of the Marauder in a titanium prototype. You can read that post here. What is special about this bike is I used the pre-existing 157mm TA standard paired with an 83mm shell width. This is technically an existing DH standard which Pivot tweaked by adjusting the flange spacing of the non-drive side to move it outboard a bit more to stiffen up the rear wheel build and subsequently re-marketing it as “Superboost”. Which I think took some by surprise as a “new” standard. It’s quite the contrary. And when paired with that 83mm shell width (another existing standard) you get perfect chain line and a critical area of the bicycle is literally opened up to so many opportunities as tires gain more volume and width. When Trek introduced the Stache a few years ago, in order to hit the numbers and geometry they wanted, they created the intermediate step of 148mm rear axle spacing but if you take a closer look at that bike, in order to get the tire clearance and chain stay length they wanted, they literally moved the chain stay up and out of the way… Novel but if their engineers had led the way by using the existing 12×157 + 83mm combination, they could have had all they wanted. So it’s up to builders’ like myself to lead the way in hardtail development. Hence the creation of the Marauder. So I’ve had a full season on this bike with lots to report so lets roll up our sleeves and dive right in. 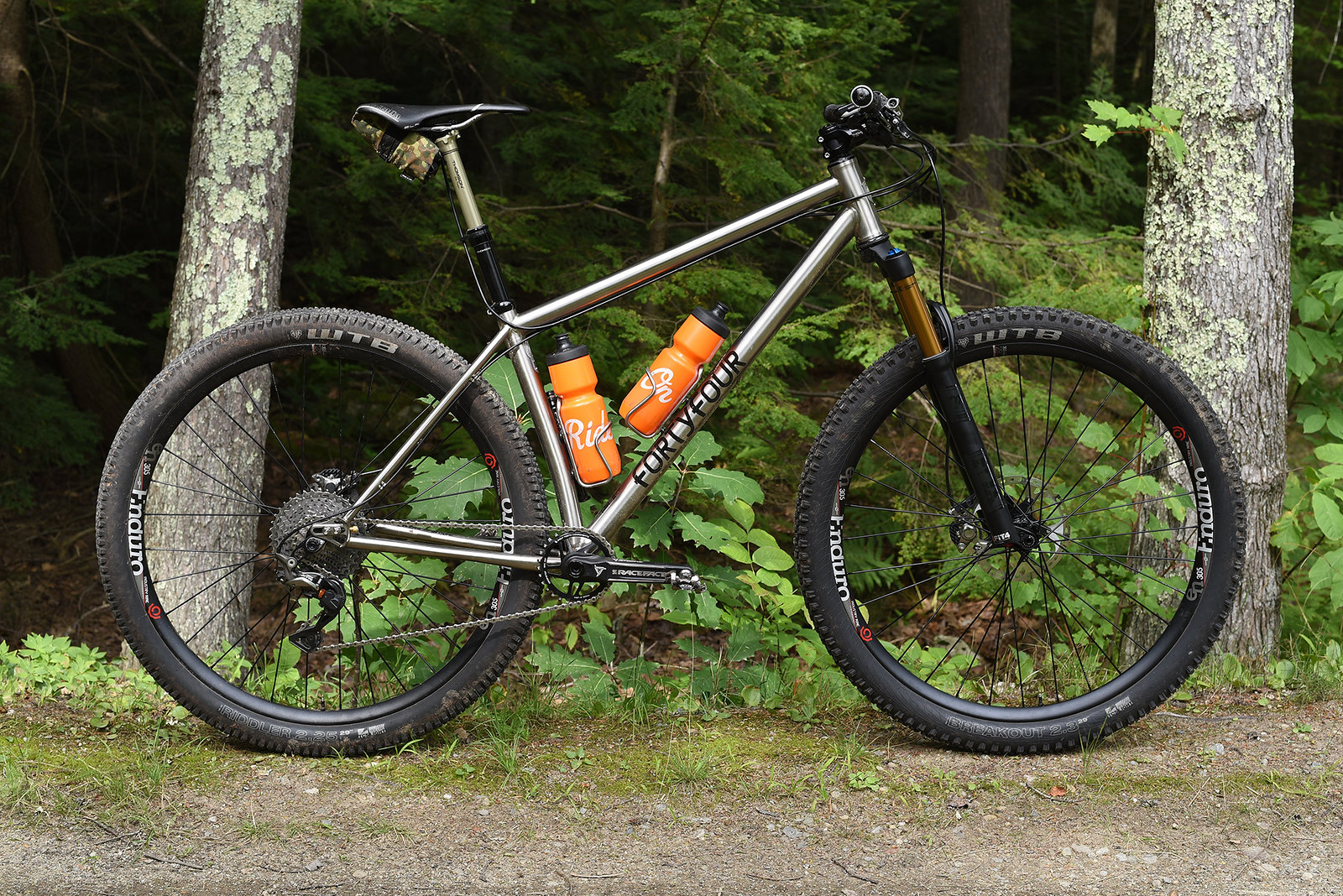 For reference sake, most days I stand 6’1″ with a 34″ inseam with relatively normal proportions. With 29″ wheels and coming from 26″ wheels long ago, I feel more balanced on the bike as the wheels are finally proportional to my dimensions and height. Right out of the gate over the course of the spring, summer and fall the bike was swapped between the two wheel sizes but it quickly dawned on me after a handful of rides that when in 29″ mode the bike was really well suited to long days in the saddle. So depending on the types of rides I was grooving on during the season, I’d swap wheel sets. Early in the spring before June hits, I’ll typically ride a single speed to hammer myself into shape and build a base of power/endurance. Then when june hits, I’ll swap over to gears for the remainder of the season and occasionally ride a single speed. That base then carries me through the season but the added distance I build upon in season comes into play when we turn the clocks back and daylight hours shorten. So I typically go from riding to the trail head to driving late in the fall/winter. I’ve found all that base building over the course of the season pays off late where I can ride shorter, faster rides of only single track with limited daylight hours. But those 29″ wheels feel nice and leggy and the geometry I’ve cooked up keeps the bike quick and nimble. Gobs of tire clearance for more options as tires grow with perfect chain line thanks to that 83mm shell and 157mm rear axle spacing.

One thing I immediately dialed in was my tires. I swapped an early set up back to WTB’s and the suppleness was where I wanted it to be. I’m really looking forward to them offering the Riddler in a 2.4 (I’m keeping my fingers crossed Clayton!). You can get a load of that tire clearance below: 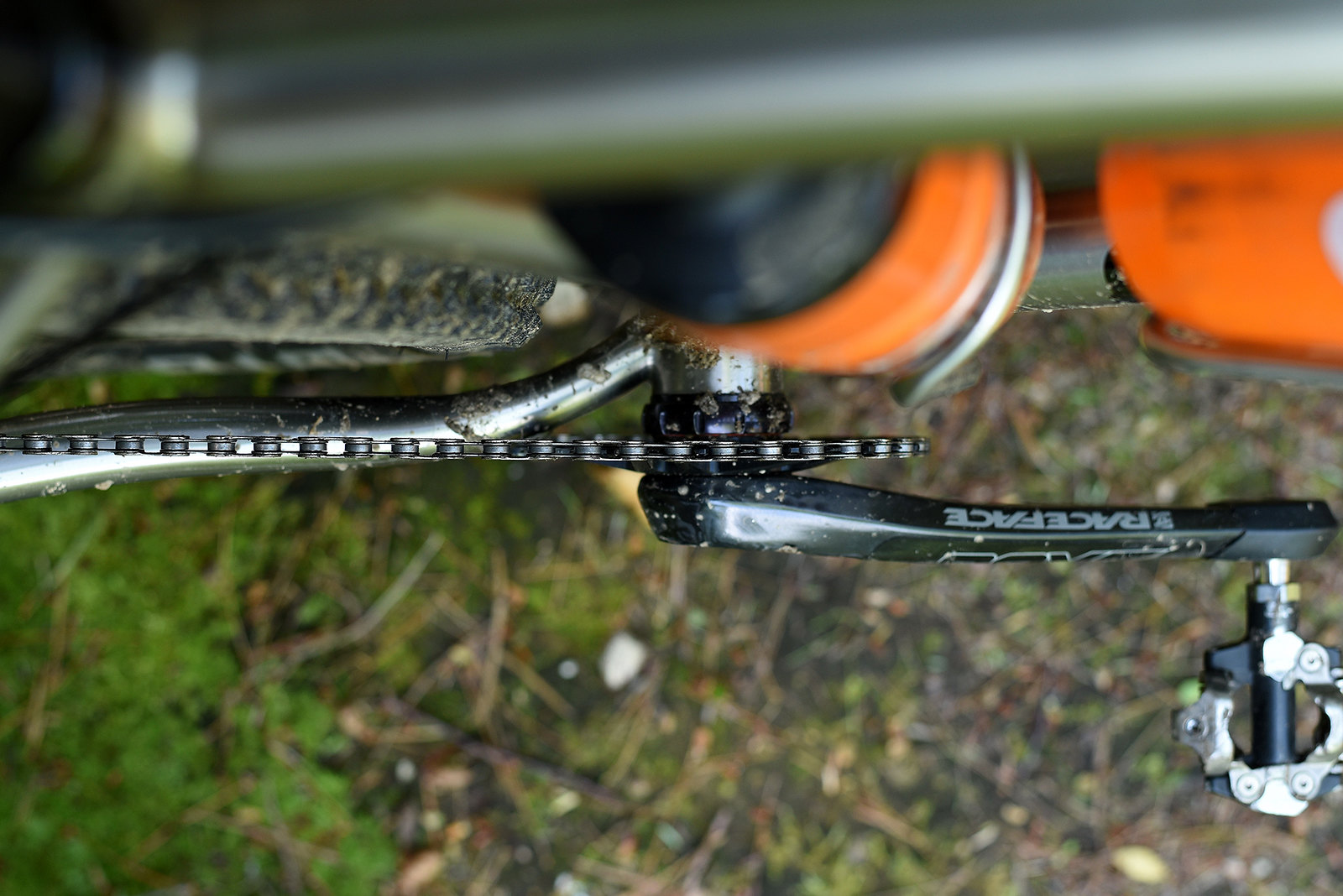 One upgrade along the way was swapping the Turbines out for a set of Next SL’s which have a slightly narrower tread with a custom 83mm spindle to lighten the overall build weight into the 24 lb range: 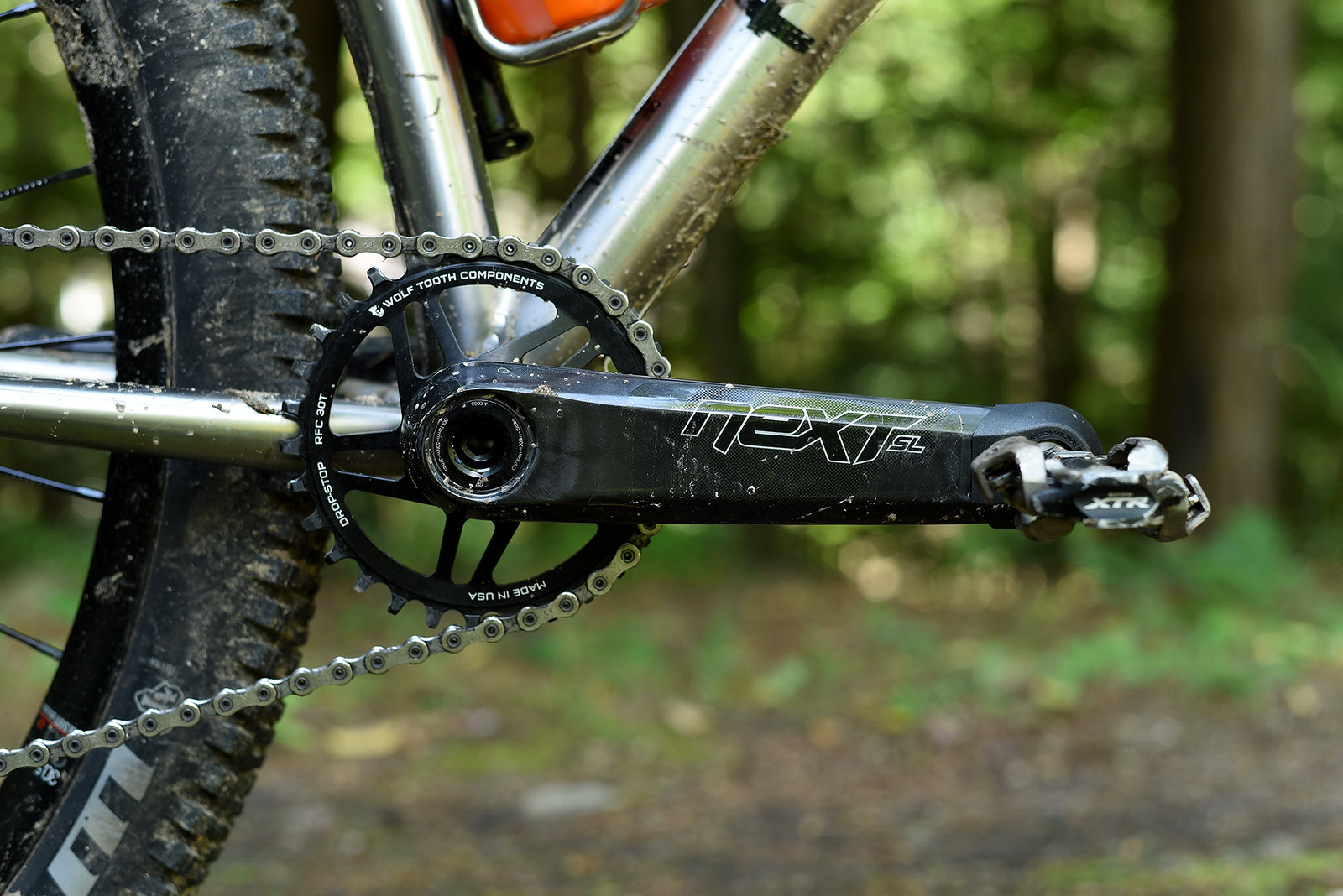 It’s a subtle change and I wish the turbines reflected the same tread as the Next SL’s. Not sure why they are so wide as they really do not need to be that wide (unless they’re offering a set of cranks that have additional tread to make room for full suspension swing arms – I’ve spotted some other riders builds and there’s little room down there!). But this build saw many miles and all kinds of different terrain over the course of the season. I’m really happy with how this bike performs for longer days in the saddle when in 29″ mode. Again, still quick and nimble but lots of momentum for those long days. However… 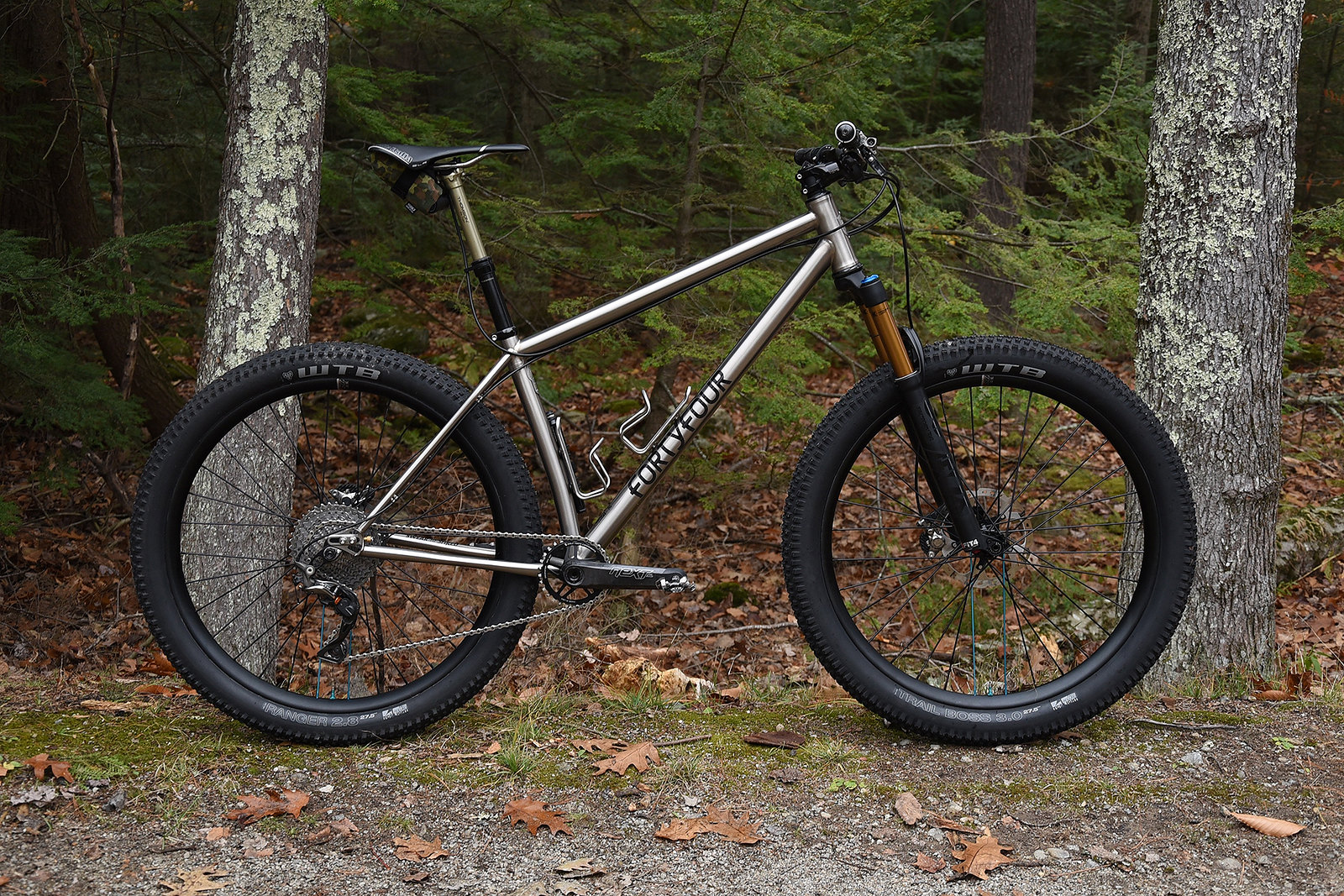 Up above you’ll take note of the 27.5+ wheels. When the bike is swapped from 29″ to 27.5+… it’s transformed into a BEAST. The bike goes from long days to short, fast and loud like a good punk rock song. Both are equally nimble but the overall demeanor of the build just gets rowdy. I’ve been riding a dropper now on both my mountain bike builds (steel marauder / ti marauder) and although I can ride everything without one, the biggest benefit for me has been the ease of stress on my lower back especially going down hill. And with the ability to compress at the knees and hips and really push on both wheels heading into turns to preload and snap back out of the turn I can carry SO much more speed and momentum down hill. And with that increased traction of the plus sized wheel, it’s really a one two punch. Not to mention, according to my opinion, the 27.5″ wheel is the mountain bike wheel size that always should have been. That’s no smoke and mirrors kids. It has all the positive attributes of a 26″ wheel with quickness, agility and the ability to muscle the bike up and over obstacles with that nice SNAP into a big bunny hop up and over obstacles. It also possesses all the positive attributes of a 29″ wheel which carries momentum and “rollover-ability”. Now add volume to the tire and you can run slightly lower pressures and traction abounds. I feel that the market is moving towards and settling in on the 2.6-2.8 for 27.5 Plus as this allows for relatively low weights but increased durability without sacrificing side wall protection (the Trail Boss’s 3.0″ side wall is relatively thin and prone to abrasion). So I’m excited to see what tire profiles come to market in the future in this size. But yeah… this bike absolutely RIPS when the trail heads down hill. Drop the post, sink down low and let it all hang out. The bike responds and powers through turns with lots of fun at both ends of the spectrum with little lost in between. I’m loving this bike deep in the woods to session lines and obstacles to hone skill.

So how about that hub spacing? 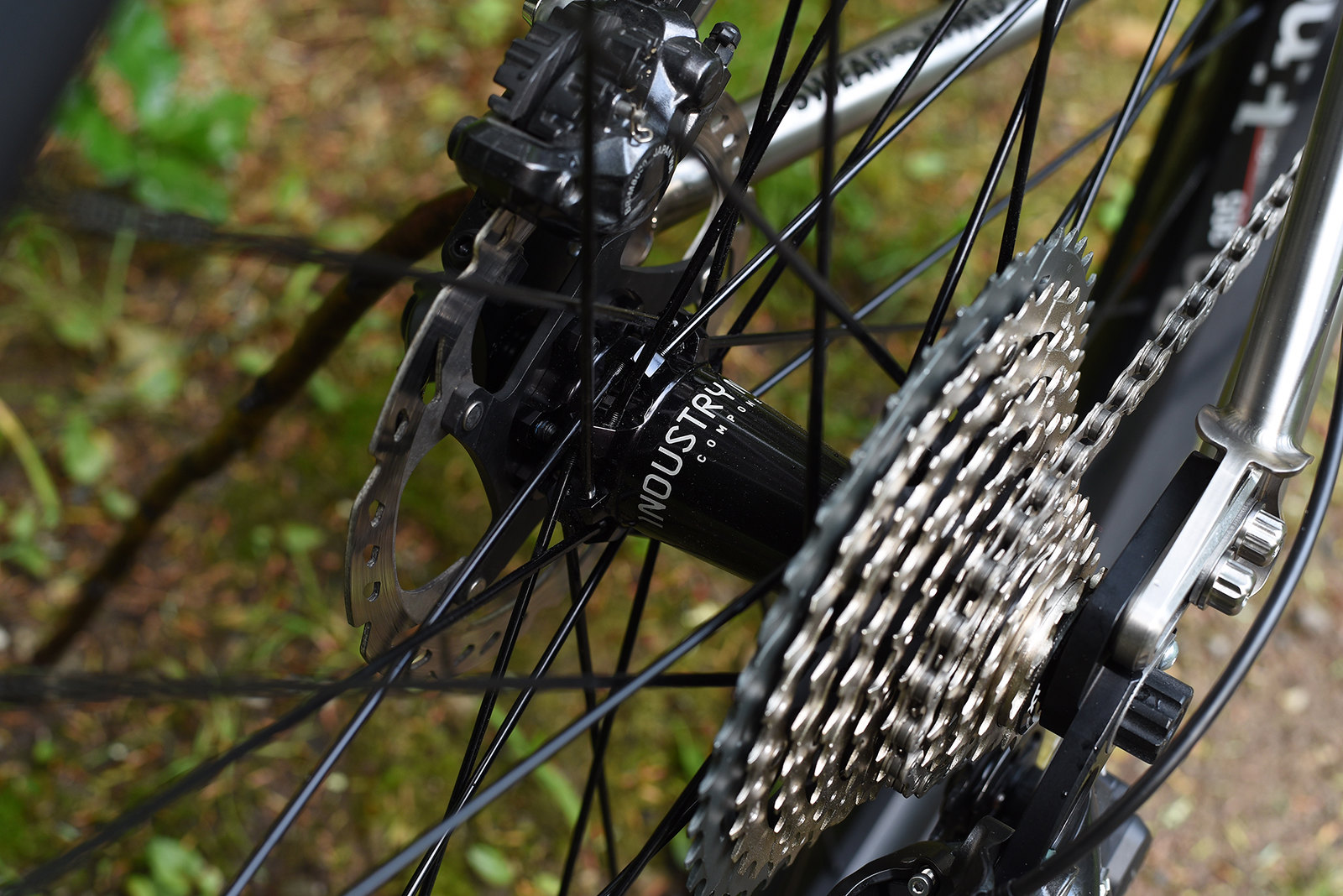 Well it’s stiff. But not in the way you’re thinking where the back end bounces all over the trail sort of stiff. The bike holds it’s line under power but power transfer is superb. Stomp on the pedals and power goes through the pedals to the rear wheel. Through corners the increase in flange triangulation helps keep the wheel tracking. But power transfer with this build I think has more to do with what I’m doing with my chain stay design. Here’s what’s going on in a nutshell: I’ve taken a .875″ OD chain stay and formed it through the center section so it’s a 1″ diameter oval. So weight of a .875″ chain stay BUT the stiffness of a 1″ chain stay exactly where you need it for lateral stiffness. And lots of tire clearance and heal clearance to boot. In process: 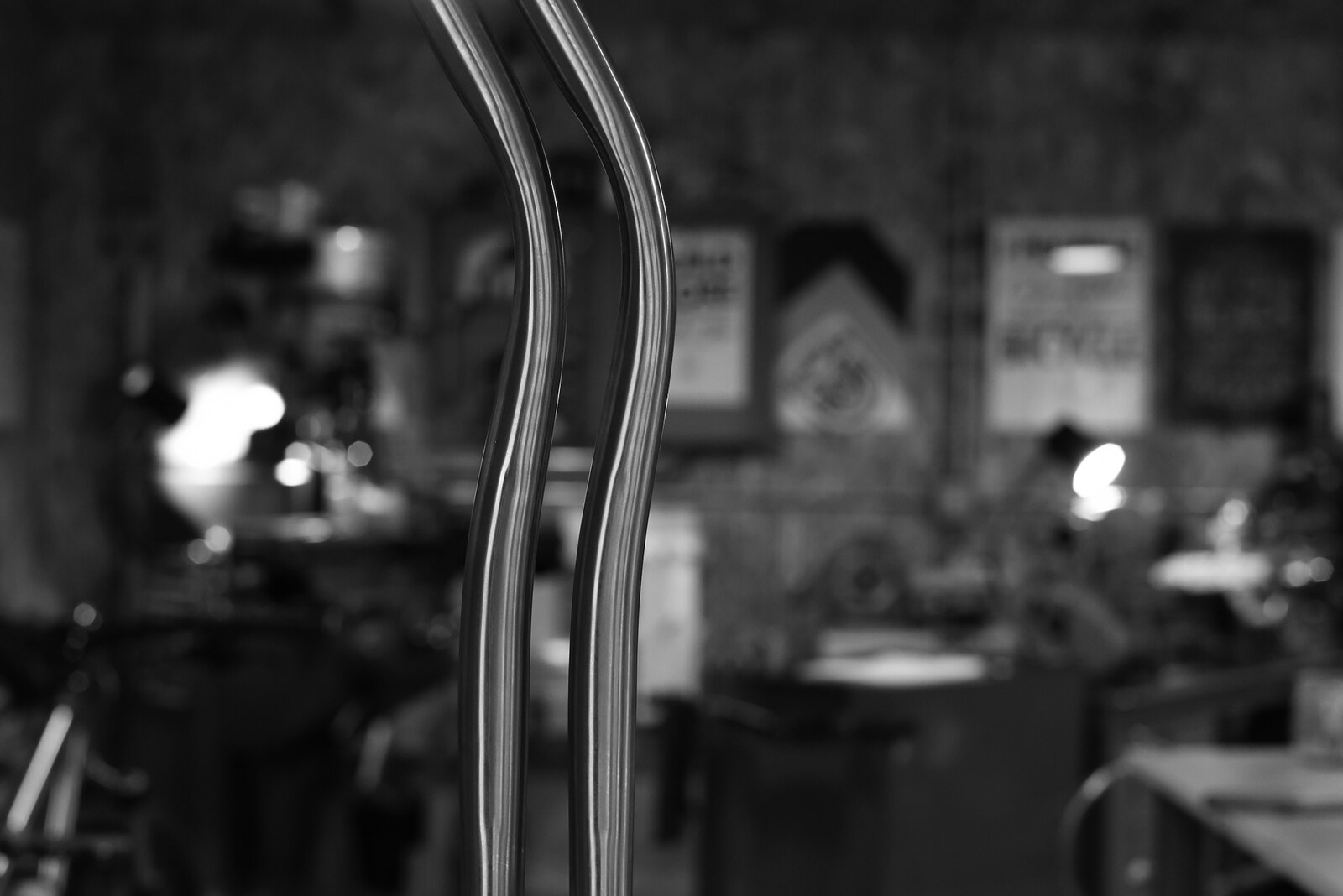 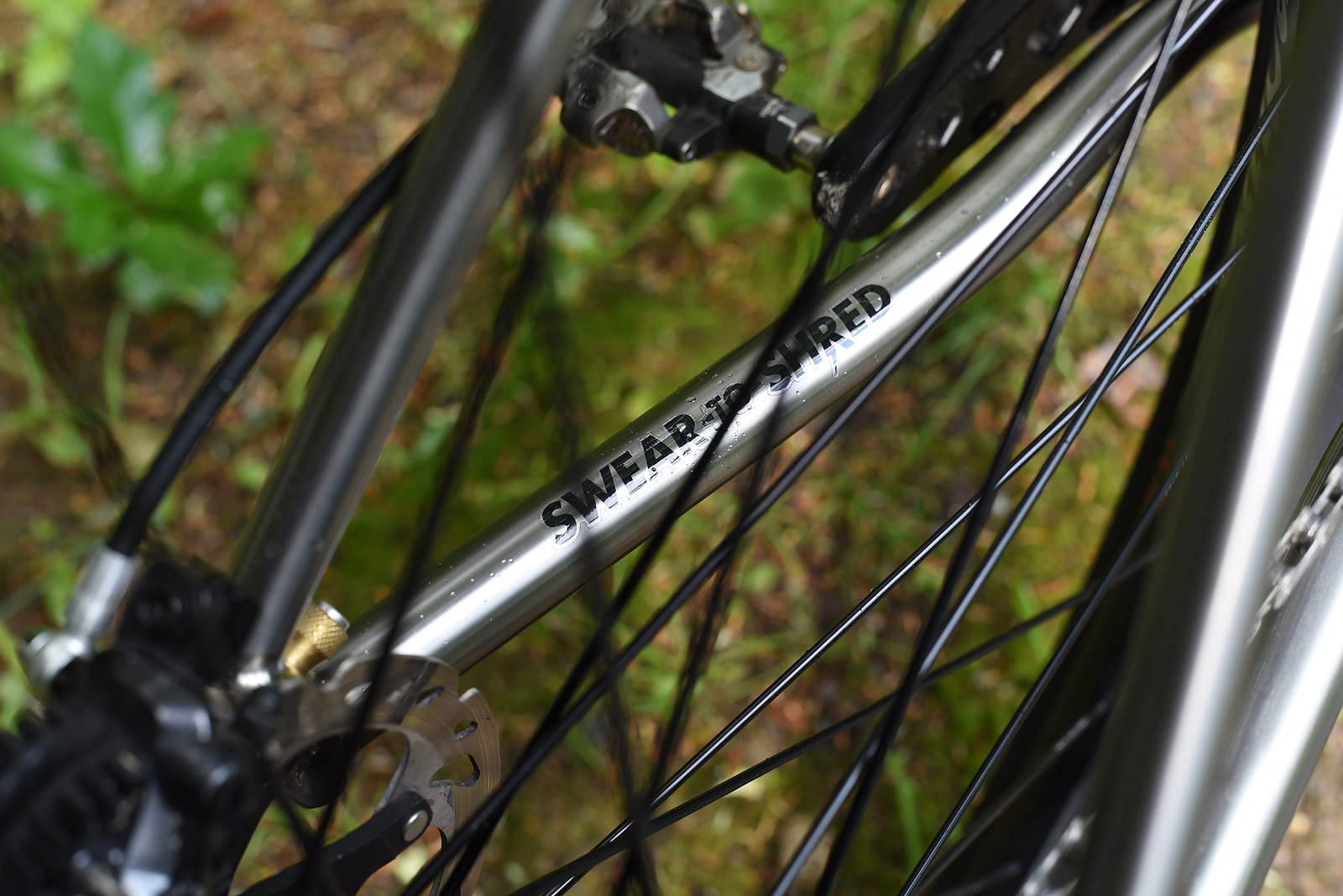 As a material when compared to steel, titanium to my sensibilities is just as stiff but I think the increase in stiffness between the two materials actually comes into play further into the ride as you tire. For me, this was in the 3 hour range where my upper body was feeling it more of the increased stiffness of the front triangle. A quick adjustment of air pressure and subtle tweak of rebound so my build differs between steel and titanium with fork setup. However, where titanium shines is it’s ability to really smooth out chatter on trail. It has a really unique ability to soak up and dampen out that trail “noise” for a buttery smooth ride quality. Don’t get me wrong, It’s stiff but I believe a lot of early titanium bikes from the 90’s have some riders misinformed as they were a little bit too rubbery as they were using slightly undersized tubes for the application. With modern geometry and application with the right tube choices, I can tweak ride quality depending on how the rider is riding what their terrain preferences are. It’s a pretty cool material for this reason among others.

So for the 2018 season I have 1-2 more prototypes planned for the Marauder Ti leading up to it’s tentative release date for the spring/summer of 2019. I’d like to spend another season with this bike and make a few small tweaks on the production and process side of things. I’m a mountain biker after all and I’d like to get this sucker “just so”. So stay tuned for more action. Till then: Keep pedaling!