Here’s a question I’ve been getting a lot recently as more and more clients spec droppers with their mountain bike builds: Why no internal routing? Some builds will have internal routing while others will have external routing. No one ever asks me about this though: So how tough was it to set up that internally routed dropper? But when it comes to that cable running up the back of the post? Man, I get a lot of questions why. The reasons are actually pretty simple and logically straight forward. So let’s take some time to talk about it.

Let’s first start with internally routed dropper posts. I’ll use Thomson’s Covert dropper as an example as that is the dropper (no matter if it’s internal or externally routed) that I always spec unless the client requests otherwise. They work and keep working. They’re pretty maintenance free too. Hop up your lever with a Wolftooth Remote Light and it’s even better. But I digress! From a process stand point, meaning the actual routing part internally is pretty simple. I first pick the appropriate seat tube, note tapers as I normally would, cut to length and face off the top of the seat tube to be welded to the integrated CNC collar. Then I bend the radius and fit the CNC collar after the tube has been mitered to fit the bottom bracket. Now with the overall length finished, I’ll tack and weld that CNC collar in place making sure to back purge the whole thing so the inside of that precision CNC finish remain as such (that’s so the inside doesn’t oxidize and then reaming becomes EXPONENTIALLY tougher – try it some time). Here’s an assembly just before I tacked/welded the CNC collar. You can see the seam up at the top: Then it’s onto the mill to make any bottle boss holes and slot the collar for the seat post clamp (I leave that little nub there for ease of process during reaming and also to keep the tube round while welding). Now is when I actually tackle the internal routing reinforcement. This is simply a piece of the off cut 1.375″ OD tube. So put that into a tube block, make the slot (.25″), then cut the part out of that tube scrap. I then file the corners to match the radius of a Salsa supplied grommet. It’s nice little part I source from QBP. The next to last I’ll braze the reinforcement to the seat tube and finally put the whole assembly back onto the mill to be slotted. I do that slot last so everything is lined up nicely after I sweat the silver brazing wire out to the ends of the reinforcement and that original slot helps to keep the brazing wire put as I heat the whole assembly up. Here’s from the side: 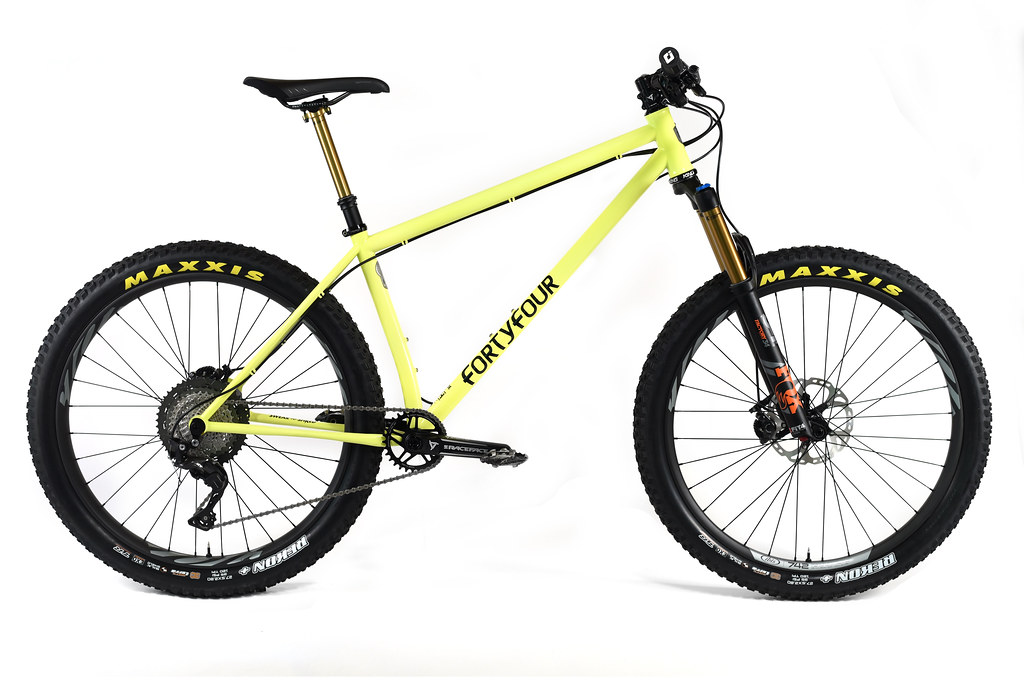 So that’s all the steps BEFORE I even get to assembly. Again, it’s relatively straight forward on the process end of things but now let’s get to the actually assembly post powder. For Thomson, the post is cable actuated with the head of the cable needing to be installed at the base of the post. Not a problem right? Sure it isn’t.. but keep in mind you need to grease up post and inside seat tube, run the cable housing up through the seat tube, then run the cable, attach it to the base, then pull the whole assembly back down through keeping everything in tension. Then match up the housing to the external routing up the non-drive side of the down tube so I can measure the right amount of line to cut the housing to the proper length. Once measured, I have to now again pull the seat post and housing/cable assembly back up and through so I can get the cable out of the housing to trim it down. Now repeat that whole process over again. Because the cable is attached to the base of the dropper, you need some way to keep the housing in place at the base of the post to properly make that measurement otherwise it just won’t stay in place I’ve found so I need to run that line 2 times through that greasy seat tube. It’s really 2 person job… But it takes some time and care to do it right and make sure everything stays put once you do finish trimming the housing and finally fixing the cable at the lever. A lot of steps. What if you want to travel with your bike and you need to pack things up? You’re moving that post around. Or removing it all together. What if you’re bikepacking and want to run a rigid post? Well you’re removing that whole assembly and reassembling it post trip. More steps. But there’s no cable up the back of the seat post. However there’s a routing all the way up the non-drive side of the down tube. I could route the line inside the down tube, but I question putting two holes in critical areas (especially up by the head tube) on a mountain bike. That’s really why I run it up the DT. I could spec a T47 shell and run it entirely inside the ST, BB and up through the DT and have it exit the head tube but set up and fishing that one? That’s even more steps and patience.

Now let’s look at the external routed set up. Relatively clean and simple set up. Seat tube is built as above without the last steps of the reinforcement being added. So that’s less time on the build time clock. Post powder, I’ve used the same triple style cable stops so rear brake is oriented to the far left. Rear derailleur cable rides in the center. Dropper cable comes off the left hand side of the handelbar and runs down the outside right of the top tube and up behind the post. Grab all 3 cables and zip tie them together once all the lines are run, measured and trimmed/fixed in place. SO SIMPLE. Need to remove the post to ship the bike? Do it – just bring 3 extra cable ties if needed or undo just one and bring an extra. OR slide it all the way down. Need to swap out that post for a rigid post for a bike packing trip? Cut the zip ties. Undo the front lever. Pull the whole assembly. Slide in rigid post all greased up and put the lever back in place. Cable rubs the seat stay you say? Add a little bit of helicopter tape to that portion of the seat stay. Put plainly: External routing for me is more about ease of maintenance and set up swaps. It’s also way less steps on the production side of things as well as time it takes to build the bike post powder. But long term, I feel it’s much easier to deal with. And a shot from the side: Aesthetically however, some just need that cable to be hidden inside the seat tube. And that’s AOK. If you’re that customer, I’m happy to do it for you! But I’ll always pose the argument and put my reasoning for external cable to the client. It’s still their call though. And that’s what “made to order” is all about.

Posted in Opinions on all things Bikes.
Share
PreviousMountain Bikes of 2017
NextSUPERBOOST