So I’ve had a bunch ask me what my opinion was about a Dropper seat post. Ironically my opinion was: I had none. Simply stated I didn’t have an opinion because I had never ridden with one and none of my personal bikes were set up to run one. There were a few things however that needed to happen before I could build around one and pack all the performance touches that make my bikes ride the way they do. First and foremost was the ability to offer a 30.9mm seat post in a radius seat tube. That tooling required some time to decode as I formalized the procedure and methods 2 seasons ago. Once that was in place, I was able to offer both 31.8 and 34.9mm radius seat tubes and subsequently I was able to now offer a 30.9mm dropper post. From here, routing for a stealth dropper or an externally routed option is a cinch. Most prefer a stealth routed dropper for it’s cleanliness, but me being me, I knew I’d want to be switching things up occasionally as the bike I wanted to run a dropper on was my Marauder which can run gears or be run as a single speed. Most stealth set ups require that the line be externally routed down the down tube or all internally routed. So you have to snake the line inside which takes some time, but getting it out of course takes some time. This was something I did not want to be bothered with when making set up changes. With this in mind, I wanted the option to be able to quickly convert in any set up and that included swapping from a rigid post to a dropper post and back again. So a non-stealth post was in order when I rebuilt my Marauder last year, shown below in SS mode: With that rebuild, it enabled me to finally run a 30.9mm dropper. Thomson was the obvious choice and with that rebuild I had been planning, a 30.9mm Thomson Elite dropper was procured early in the process. However, around this same time I had been working on a project to send a Marauder to John Watson at the Radavist for review. Part of the kit was to be spec’d with a dropper, so my Thomson Elite dropper left 44HQ for the summer and into the fall with that test build. So that summer and fall, I was not able to actually do any riding atop a dropper. Winter hit, the parts kit from the Radavist test bike came back to 44HQ (John ended up purchasing the frame…) and I only had to wait till the snow melted, which this year wasn’t all that long of a wait due to the limited snow fall we witnessed.

So once spring arrived, I was busy cleaning all the parts which were my own from that test build so I could build up my Marauder as a 1×11 and get the feel of a dropper. And hopefully formulate some sort of informed opinion on the matter. Since the Thomson Elite dropper really has little to no set back (basically 5mm…), I had to make up for that lack of set back by adding a slightly longer stem and pushing the saddle way back on the rails. Less than an ideal “fit” but would make due for the test rides. First ride out and I immediately knew I had to fiddle with positioning of the dropper’s lever. I ended up positioning it between the shifter and lever next time out, but ideally I’d have positioned it with the help of a “remount” via Lindarets or machining a custom part that attaches via the i-Spec 2 mount with the help of Shimano’s shifter mount on the left side of the handlebars/front brake lever.

Here she is just before the first ride (so it was changed post ride to be between lever and shifter, which proved much easier and quicker): So first ride out was interesting as I put the dropper or rather adapting TO the dropper through it’s paces. First thing to think about was thinking about thinking of using the dropper. It definitely added a layer of “thinking” to the ride which of course with time became a bit more second nature. I was definitely more cognizant of “when” I’d need it dropped. As someone put it better than me: It felt like I was operating my bike vs riding my bike. I found most times if I was adjusting it on the fly I was dropping it too much (so it would be interesting if there was some method that had a lockout at a certain point when dropped?) or I would drop it, find I had dropped it a bit too much, made the adjustment and ripped through the tech only to find that, whoops… I had actually raised the saddle all the way back to full height. What I found worked best was just physically pausing, dropping it to the correct height and then ripping that section.

Adaptation aside, what is completely clear is how little you actually really, truly need to lower the saddle for it to be effective. 1-2cm is at most i was dropping the saddle. I did drop it in larger degree’s but what I found was that the bike lost some control (I’m not riding a down hill specific bike – I can totally see the advantages here so there’s absolutely no question about the validity in that case). 1-2cm’s felt just right when it came to the majority of the riding and technical sections I frequent. Too low and I lost some control as I often will use the saddle to rest the inside of a thigh or pinch it with my legs depending on the terrain. But when dropped those 1 or 2cm’s, it was just enough to get the saddle out of the way, enabling me to drop my rear a bit more and get a bit lower “IN” the bike. Ironically, this whole getting “IN” the bike is something I’ve focused on when I’m building my bikes. It kind of is a keystone of regarding how I actually build the bikes. Before droppers, I needed the ability to get off the back of the bike easily, move around, stay low, keep my center of gravity low, etc. So all these things were built in to the bike already making the transition into a dropper feel a bit less eye opening. I could get “a bit more low” basically. One thing I really wanted to see though was on long descents that had my lower back aching previously. What was nice about the dropper was it relieved some of that tension and stress on my lower back so I was feeling more fresh at the end of the descent and subsequently throughout the ride. So that was a really positive note. If a race or long ride was in order, I could see considering a dropper in certain situations over a rigid post and building according to the ride or race. As the rides progressed and stacked up and the more I became accustomed to the dropper, the less impressed I was with my own personal “need” for one. One thing was apparent for me: It added a layer of complexity I just plain didn’t want to be bothered with. My bike became “too mechanical”. I suppose this is why I am such a fan of a 1x set up. It removes a layer of complexity and you only bring the bare essentials into the woods. Which is something I really love about mountain biking: It’s simplicity and challenging yourself to bring only the essentials on a ride. So for me personally, this mantra and the added layer of tech were at odds. Putting my mantra to the side, the benefits of a dropper were crystal clear: Descents were a touch faster, carving corners were a touch deeper, hops were a bit bigger/quicker. How much faster or how much deeper or how much bigger was tough to say. But there was a clear benefit which was ever so incrementally gained. Now the question for everyone is how that effects your overall experience? I will say a dropper is absolutely no substitute for good, sound, well honed handling skills. I think it can help you get there if you’re lacking, but understanding the feeling of “trusting your wheels”, balance, english and getting “off the back of the bike”? Those are things you just gotta work on. I’m constantly improving and honing those. But a dropper can certainly give you some additional confidence and out on the trail, confidence in your abilities and trusting your equipment in an intuitive fashion is paramount. For me? Jury is still out! I’ve already got my Maruader back on the drawing board to be rebuilt taking the lack of saddle set back in to account so I can dial in my cockpit fit in both rigid and dropper post modes. There’s times I want to run one, and some times I do not. Like yesterday… I finished up some chores, headed down into my basement Bike Dojo, and stripped my bike of it’s gears and dropper in about 10 minutes and she was rebuilt as a simple single speed. I have to say that ride was refreshing, simple and all I was thinking about was where I wanted to go. The rest would sort itself out when I arrived: 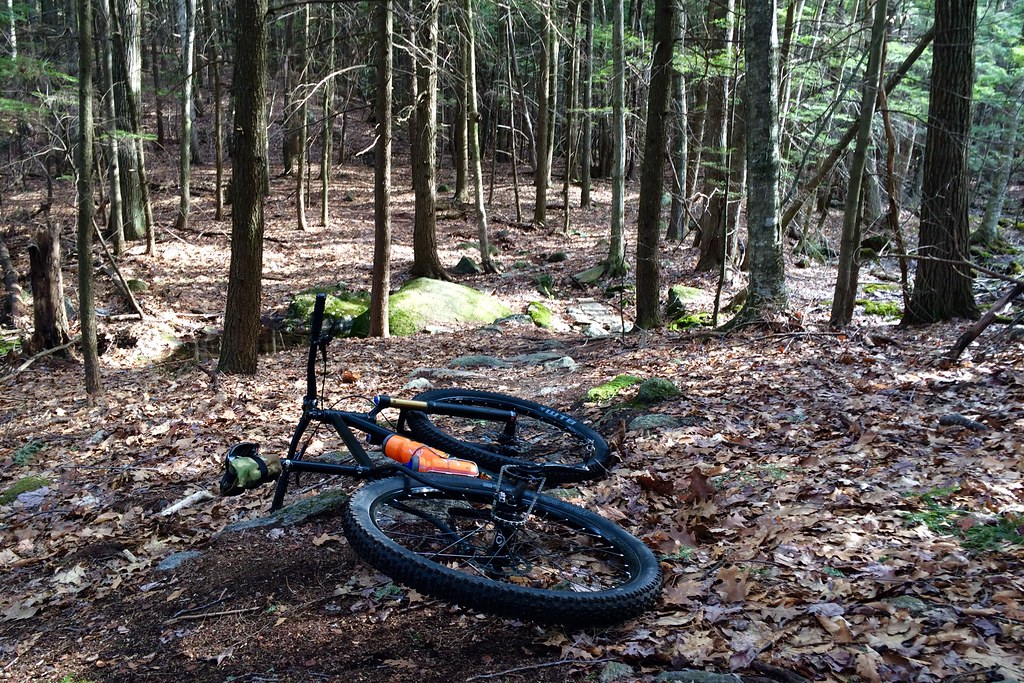 Posted in Opinions on all things Bikes.
Share
Previous“When You’re Older…”
NextRules of the Trail