Been riding a lot so there hasn’t been news. Also been building too. Finished up Franky’s 26s and Joe’s Rohloff Build / 26s. 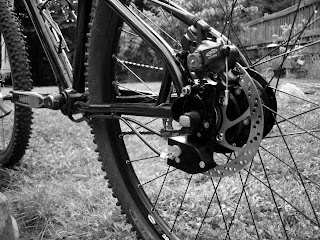 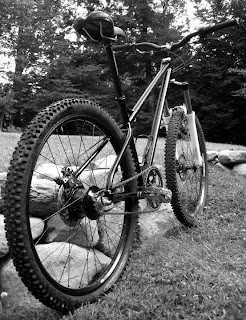 Fun fact regarding Joe’s: Good old fashioned New Hampshire Barter. You cut some trees that need cuttin’ I’ll build a frame that needs buildin’. I need cordwood, you need bike frame. DEAL! Fun stuff. A pretty good deal on his part too. This one can be run as a singlespeed as it has an ebb, it’s got rack mounts for touring, comes with a spare derailleur mount thats removable so if he ever decides to go with a ‘normal’ setup, he can and its built up as a Rohloff with all the necessary doo hickeys. 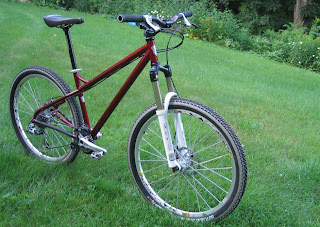 Franky’s 26s paint is a candy red powder. I have to say I’m particular to black, but red is my favorite color. I know what color the snake driver update will now be. Pic just doesn’t do it justice.

But went down to PA for a little visit with the folks and the F1 was along for the ride. Kind of took me for a ride. Warmed up in and around my grandmothers house in the perkiomen valley reservoir. The stomping grounds where I learned the ins and outs of mountain biking. A quick 30 minute pedal from my parents house. Muddier than all hell, but it was fun. Then the second day of the trip-took for the hills of Emmaus just outside of my old employer, Rodale Press. South Mountain in Emmaus PA. Forgot how technical these trails can be. But rest assured, I was in full control 95% of the time. The other 5% I leave up to “ah shit… here we go.” Good stuff. The climb from the parking lot near the playground is a good one. Crosses some downed trees that are all new to me, plenty of rock gardens, and some killer singletrack. i remember back in 99/01 someone purchased land where another trailhead was for years and quickly shut that down. I was away for a while and did not know this, and upon arriving I was harassed by a gentleman in a minivan who showed up as soon as I got out of the car faster than a jack rabbit on a hot date giving me the riot act. So we lost a lot of great singletrack. But no matter as new stuff appears to be built. But I did a large loop and was more than satisfied. Cleared a rock garden I’d only cleared once to date ONLY to be thwarted by two trees at the end of the rocks which my bars would not clear-I was pretty committed to the line at that point, and had a good pace. I approached the end looked up and realized that I couldn’t even wheelie and turn the bars between these suckers… Pretty much just rode the bars right up to them, stopped balanced in a track stand.. noodled it (hot as all hell too sweating bullets) and just laughed and had to walk. Just when you think you have something licked mother nature grows some trees. Oh well. 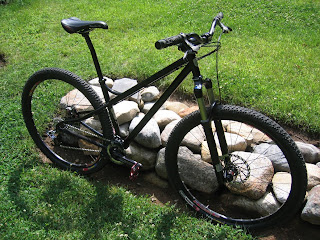 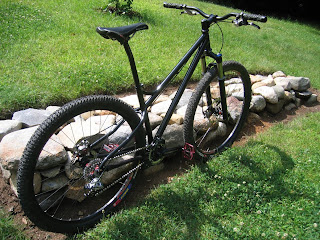 Forgot my camera. Would have taken some on South Mountain with the F1. These will have to do till next time!

But the true test of any build is in some tech. South Mountain is no exception to this. The F1 climbed well, hooked up in corners and rolled smoothly in the rough. She was descending even better than I could due to how freakin’ soaked my gloves were. I had some sweat management issues. No matter-it was great fun. Had to walk a few sections but who cares. I was on my home trails on a awesome day, on a bike I built with my own hands and not a person in sight for miles. That’s good stuff I have to say. Can’t wait to return in the fall. I’ll have to give my bud Mr. Neyen and hey ho next time. We’ll rip it up I’m sure.