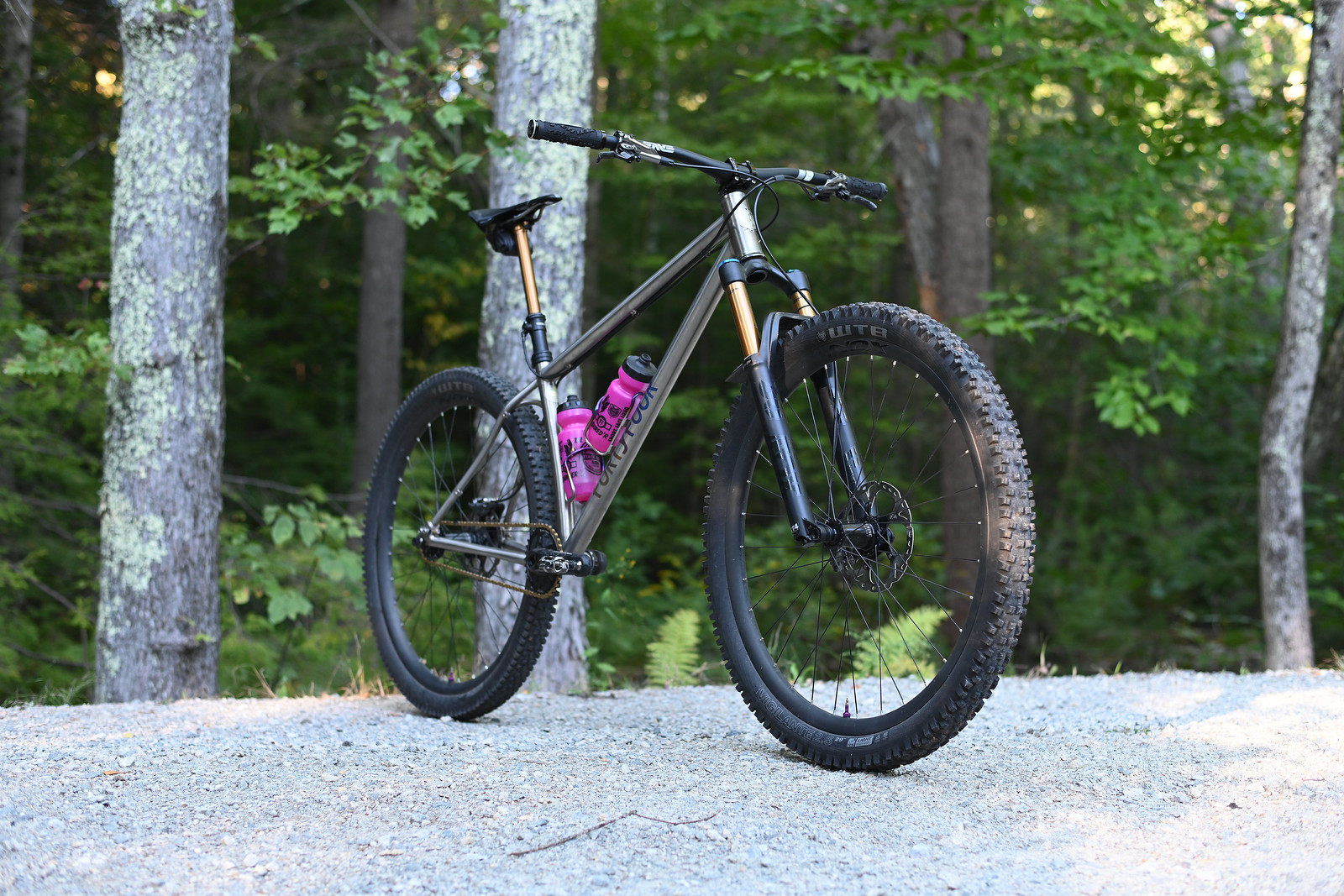 Hey there singlespeed fans! This season I made a handful of updates to my personal Marauder Ti Singlespeed and I figured I’d share them here with all of you, my humble readers. This wasn’t necessarily by design but rather as new parts and problems arose, and some of which I broke… I made updates and upgrades as needed. I’m constantly refining my personal builds each year and fine-tuning the parts spec. This all naturally gets vetted over countless hours and miles of riding and then those parts that pass my litmus test of my constant “build, ride, repeat” mantra are passed along to my clients. 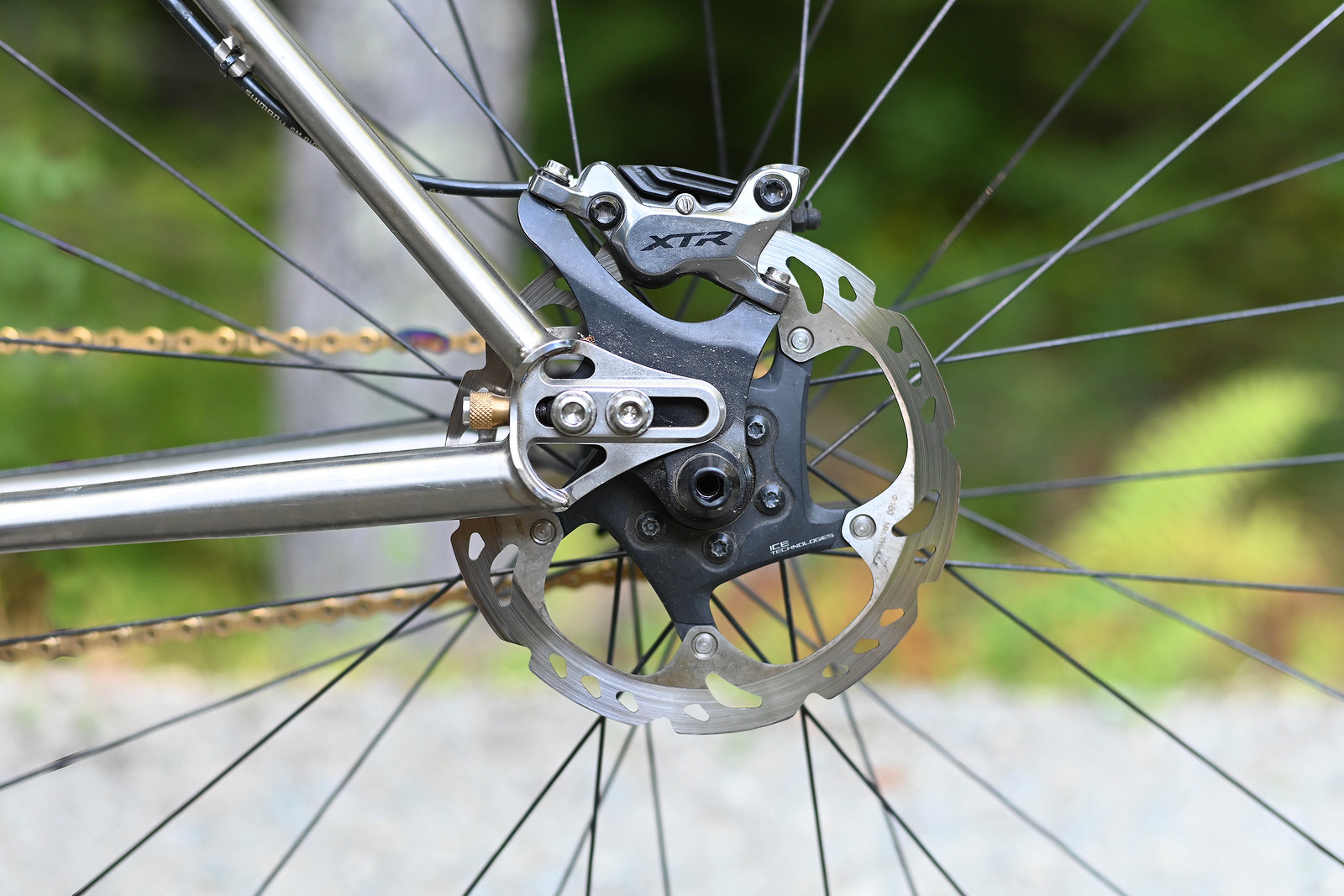 So all this started with the release of XTR M9120 and the two-piston brakes. I really loved my M9000 Trail brakes. But with the intro of a bit more stopping power, I was curious to give them a go. However, aesthetically, the new lever with its clamp location shifted in-board wasn’t exactly my cup of tea. I never felt as though the lever lacked stiffness (the claimed reason for the shift). But with a little research, the new M9120 calipers use the same SM-BH90 hose… so that meant only having to upgrade the calipers themselves! So that’s what I did. But, there are two things going on in that picture. The second of which is the Wolftooth Axle which they released rear 12mm through axles earlier sometime this year. Paragon stopped making their Shimano nut compatible rear slider dropouts and switched over to their fixed threaded style dropouts. 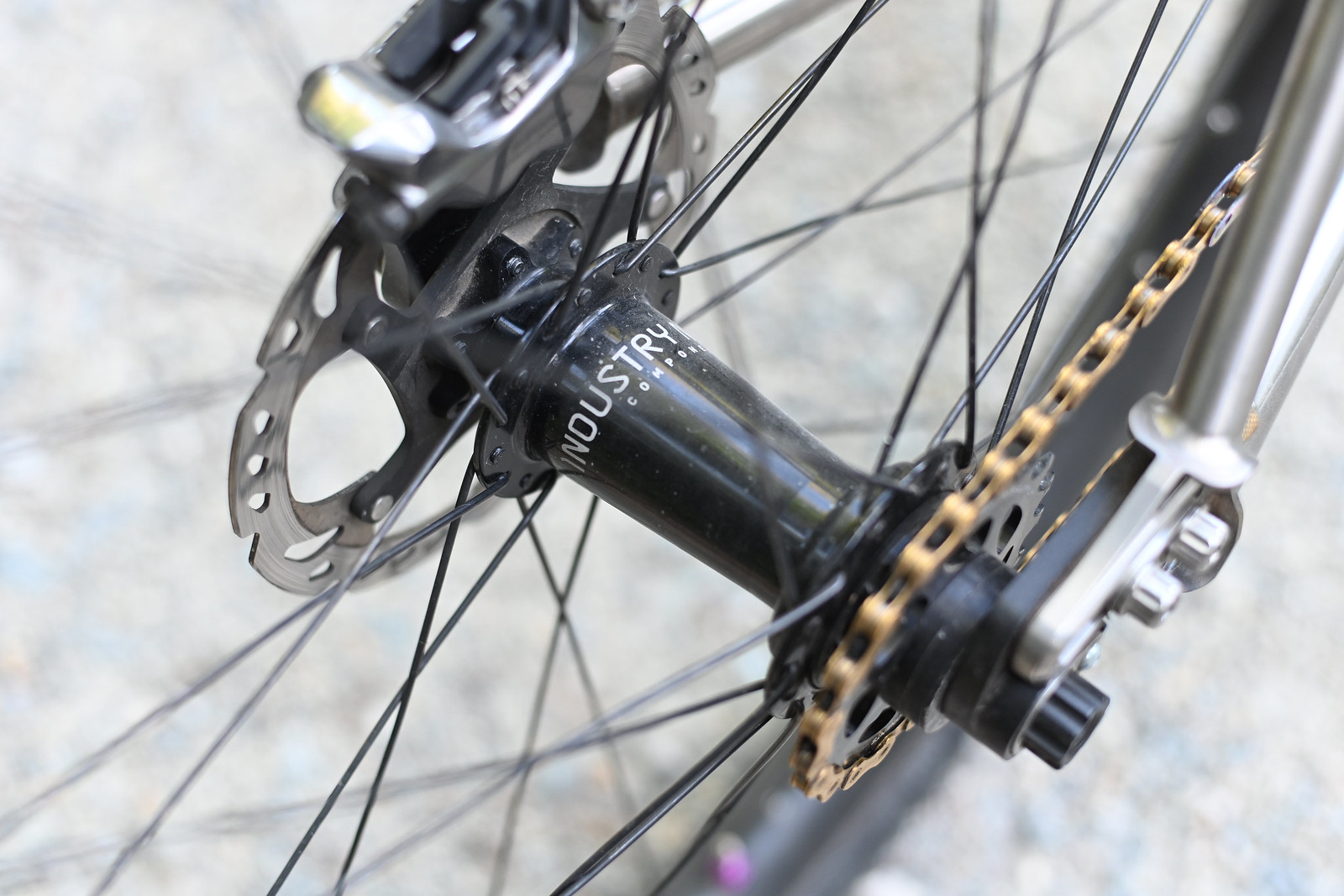 You can make out the nut in that photo above. And, sharp eyes and keen memories will note my personal builds are 12x157mm TA rears. And that’s an I9 SS hub? Well, that’s the only 12x157mm TA SS hub in the world that I know of. Custom-built out of a 170mm I9 hub shell just for me from my buds down in Ashville and a bit of fancy lathe work on the end caps by yours truly

So the nice thing about the nut version was it prevented any subtle binding of the axle and fixed nut/dropout since the nut was floating. Which helped with stacked tolerances and subtle alignment issues at the dropout post-weld with through axles (which can be hit or miss on occasion). So when Wolftooth released these axles, there was a length that worked using that dropout. So back in it went! 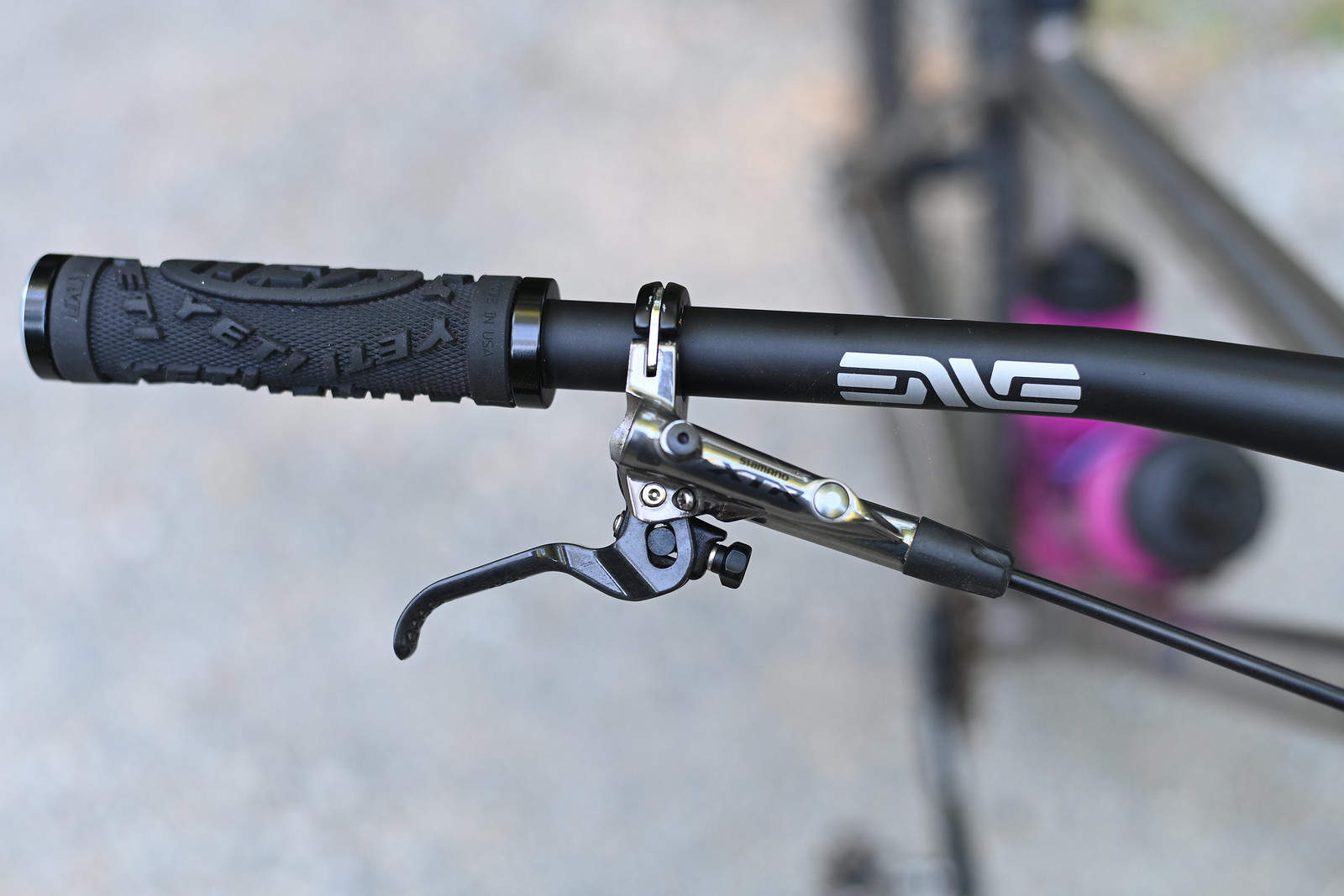 I also really liked that the M9000 levers were carbon. Not for weight reasons, but when it gets chilly up here, those levers don’t get cold like alloy ones do and you can feel that through your gloves on a long ride. Plus I didn’t have to update the adapter for my Wolftooth Remote Light dropper lever. Added bonus. Older style lever below. Slim, elegant, and the same hose to boot. 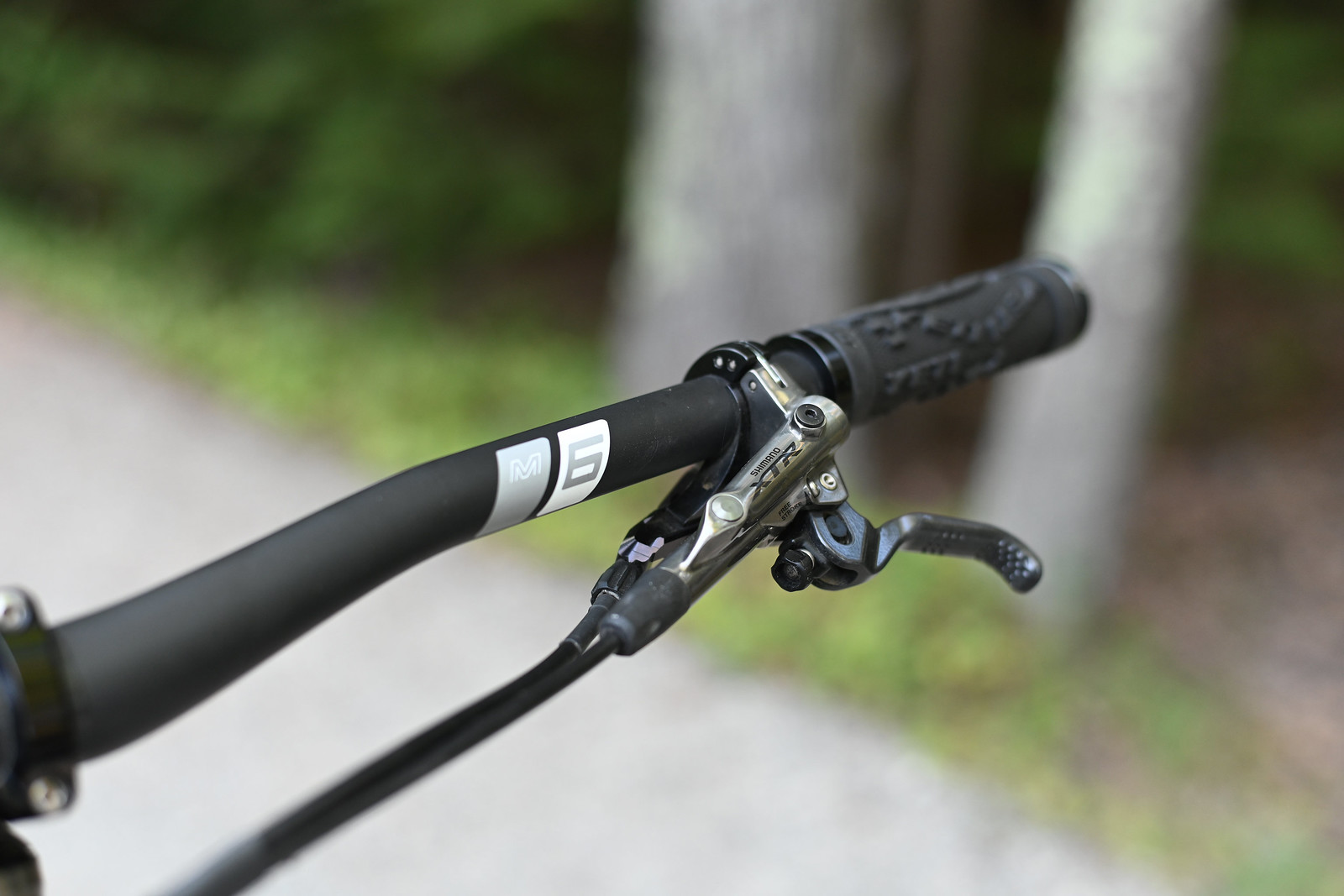 Early in the season, I scratched the heck out of my ENVE mountain riser bars against a tree limb (deadfall). I rode them for a while but decided to replace them with their new M6 series bar which is ever so slightly wider coming in at 780mm. That proved to be “just so” for me. The previous bars I believe were 750 in width? So that slightly longer width was just the right amount now for me. I often found my palms and pinkies just off the tips of the older bars. Not anymore. 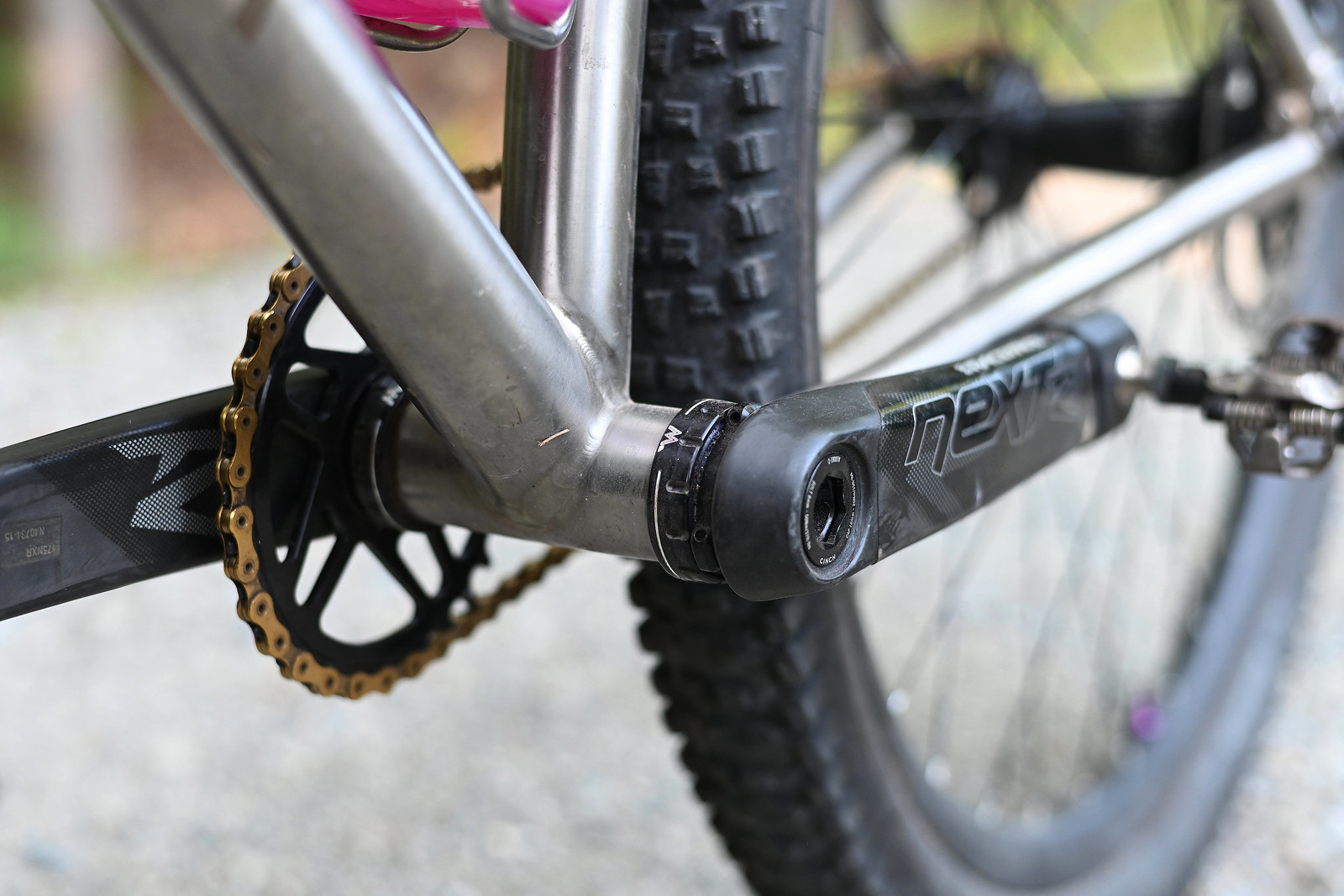 Way early in the Spring, I had a creak progressively get louder. I pinpointed it to the bottom bracket. So after a handful of ride’s I pulled everything apart and cleaned and greased the cranks, chainring, and all the small parts. While I was at it, I decided to pull the cups and clean and grease them as well. When I went to torque the drive side, it felt soft… And as I approached the torque spec? The cup sheered right off. Upon close inspection, the darn cup had started to crack. That left me with the threaded portion and just enough of the shoulder stuck in my bottom bracket. Long story short and some brainpower, I was able to carefully face off the remaining aluminum of the shell. Then file a series of indents in the cup’s bore to place a wrench inside (the indents left a purchase for the wrench) and with a tough turn, got the threads to back out. But it was slow and tedious work. While I was in there I decided to reface the bottom bracket just to be on the safe side. 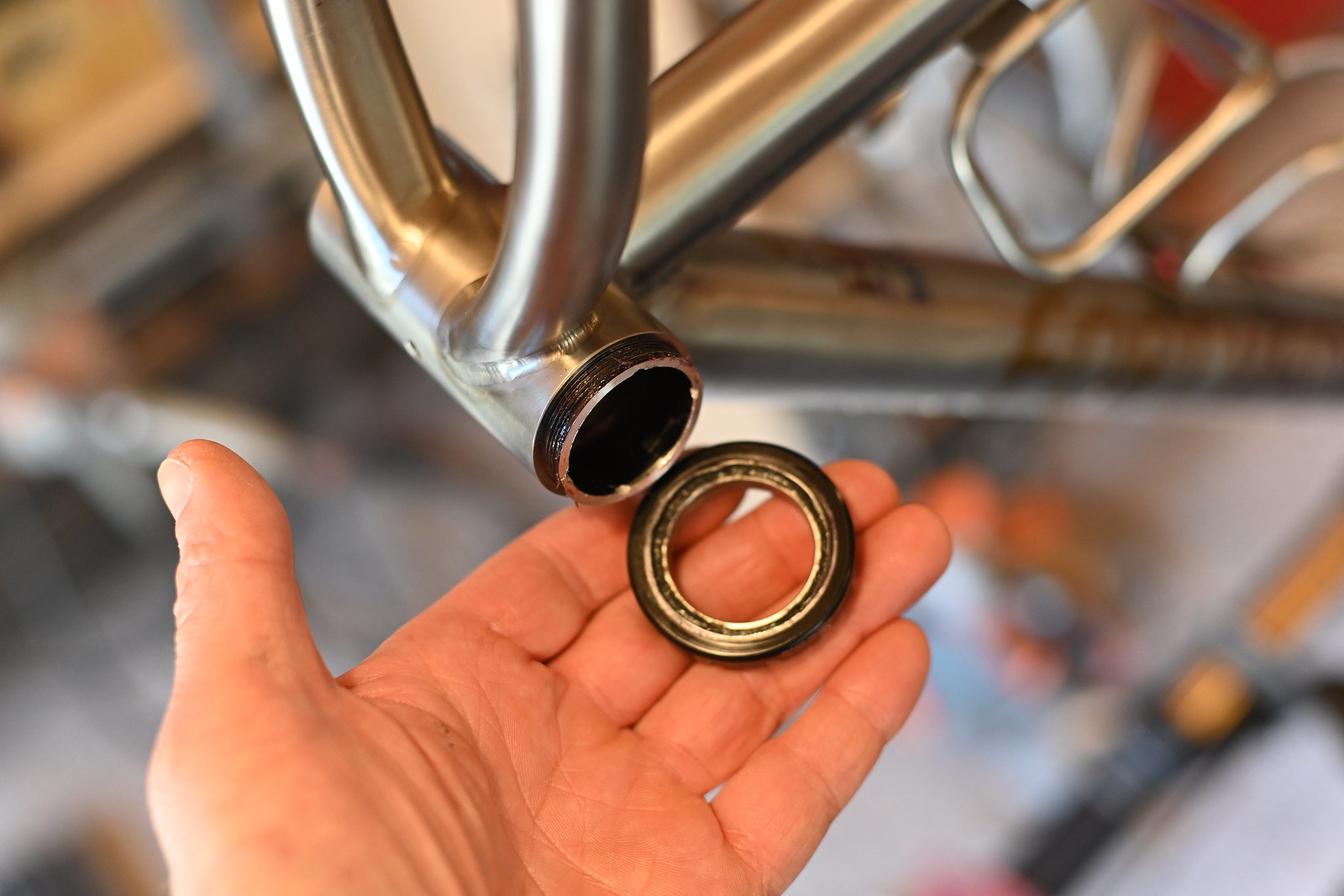 And reaching out to Enduro found that they were out of cups for the foreseeable future. That meant pillaging my fat bike which shared the same bottom bracket and waite for the replacement cup to arrive later that summer. Well… come July/early August, I was on a ride one evening and decided on a tough climb it was time to lay down the hammer. No walking this steep, rocky, rooty, crappy climb. Right in the middle, that creak came back. And progressively got louder throughout the ride. I got home and wanted to check if the BB was backing out (it had previously in the summer). And that’s when I realized I had sheered another cup. In went the White Industries cup which has a slightly thicker shoulder thickness. So far so good but it’s only September. I guess my legs are getting stronger? 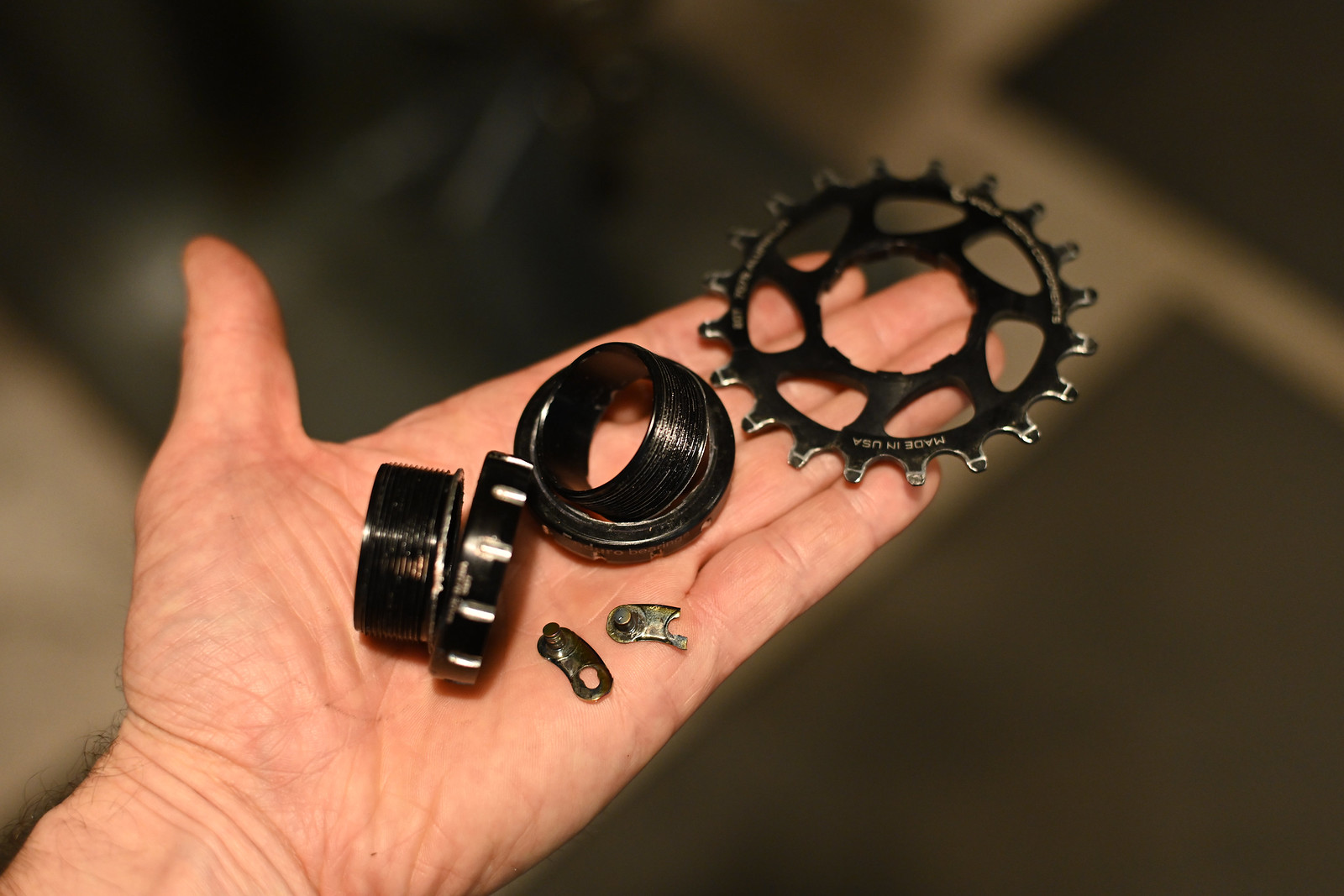 While we’re on the subject of broken parts. That’s this season’s tally so far: Two drive side cups, one master link (Thank the Sweet Lord of Mountain Bikes high above for Wolftooth’s pack chain pliers that allow you to carry several master links in the handle!), and a 20t cog. The 20t cog cracked on a ride and on the way home, I noticed in certain situations, the drivetrain felt soft. Looked closely and she was cracked in two spots. It was time for a new cog as it was showing a lot of wear and about 4-5 seasons of hard use. But I thought for sure my chain was stretched to high heaven. I got my new Park chain check tool in the mail, checked it, and only at 25%? Well, go figure. More out of that chain with a new master link (it’s a Sram XX1 Eagle 12 speed chain for the record). 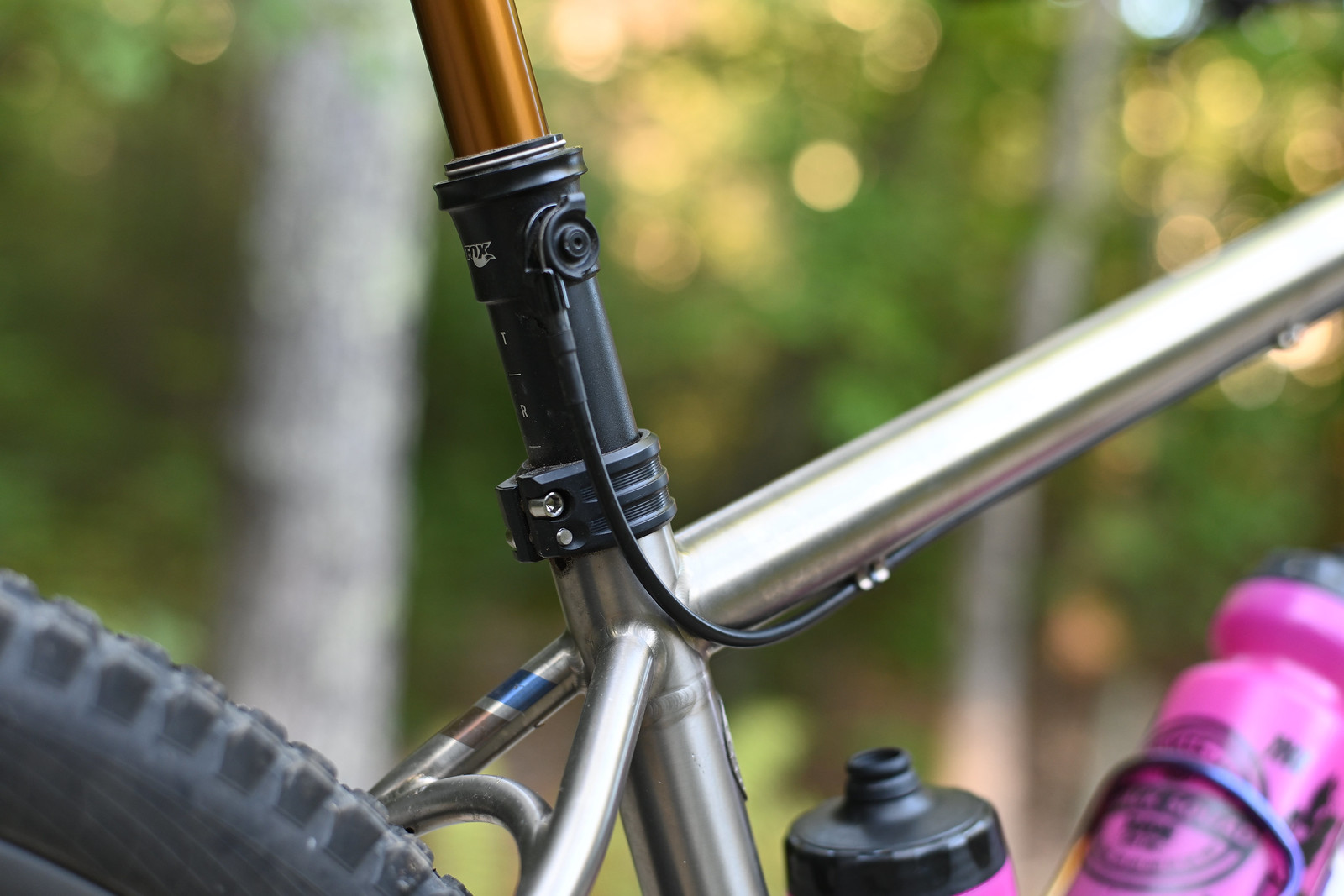 I also have been wanting to check out a 175mm dropper. 150 was treating me well, but what would 25 more millimeters do for me? Well, it completely gets the saddle out of the way and I can get even lower through turns. I’m digging the extra drop. And I nabbed one of the last collar routed Fox Factory Transfers. Give one a go if you’re curious. And Fox’s redesigned transfer is pretty incredible. I have so many builds that normally would take a 125 or a 150 now can be bumped up to 150 and 175 respectively. It’s pretty incredible how much length they were able to shave off with the redesign. And last but not least, an Engin Cycles collar. Best of the best. Have dropper or seat post slippage problems and use a 34.9mm collar? Engin has the answer. I’m only using 2.5Nm of torque of that puppy too and I go about 187lbs on most days. 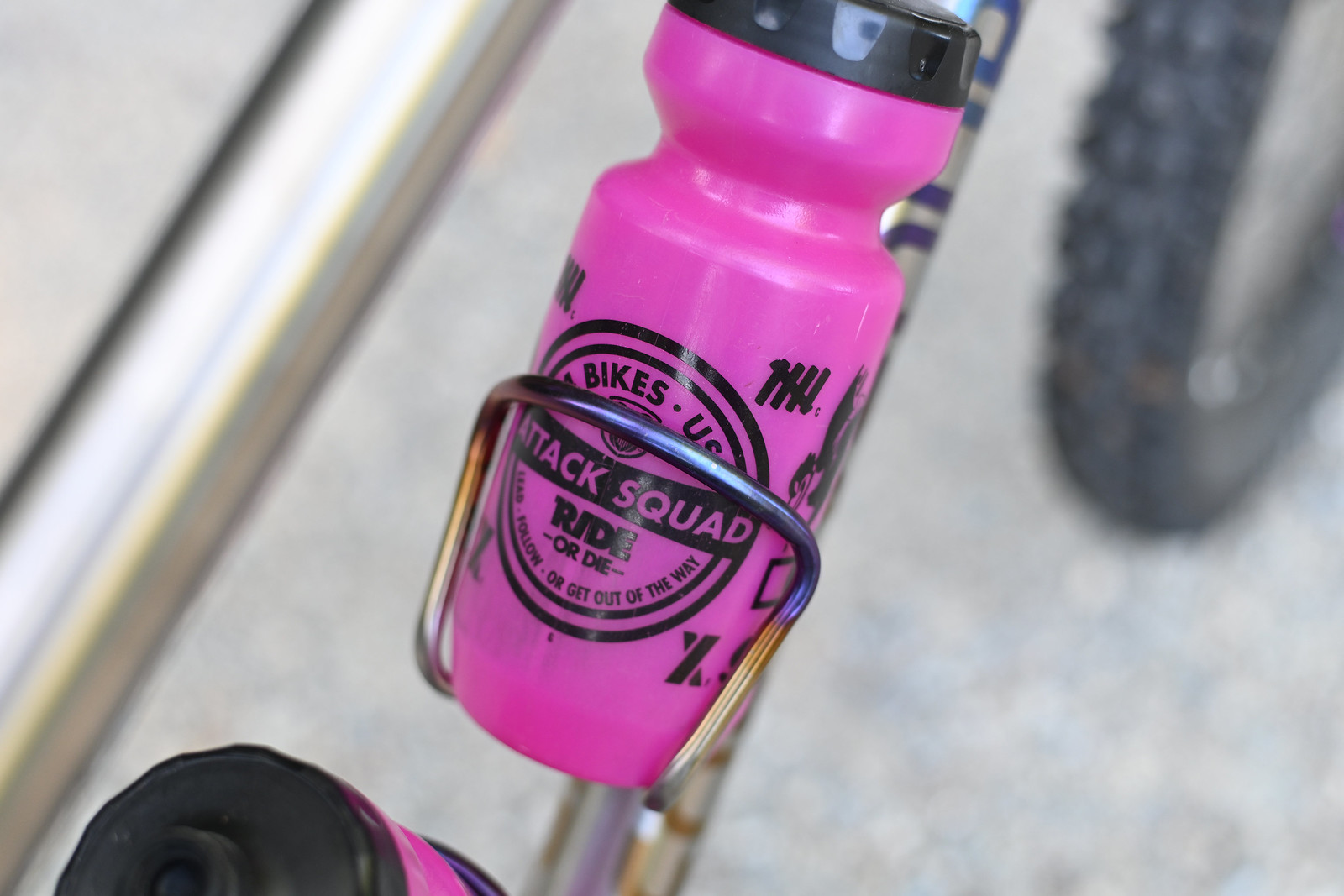 This one’s not all that big of an upgrade but I’d been meaning to do a bronze to gold fade on my Ti King Cage’s. There you have it in all it’s glory. I may make this an item in the webshop every once in a while and offer pairs and singles done in a variety of fades. We’ll see. 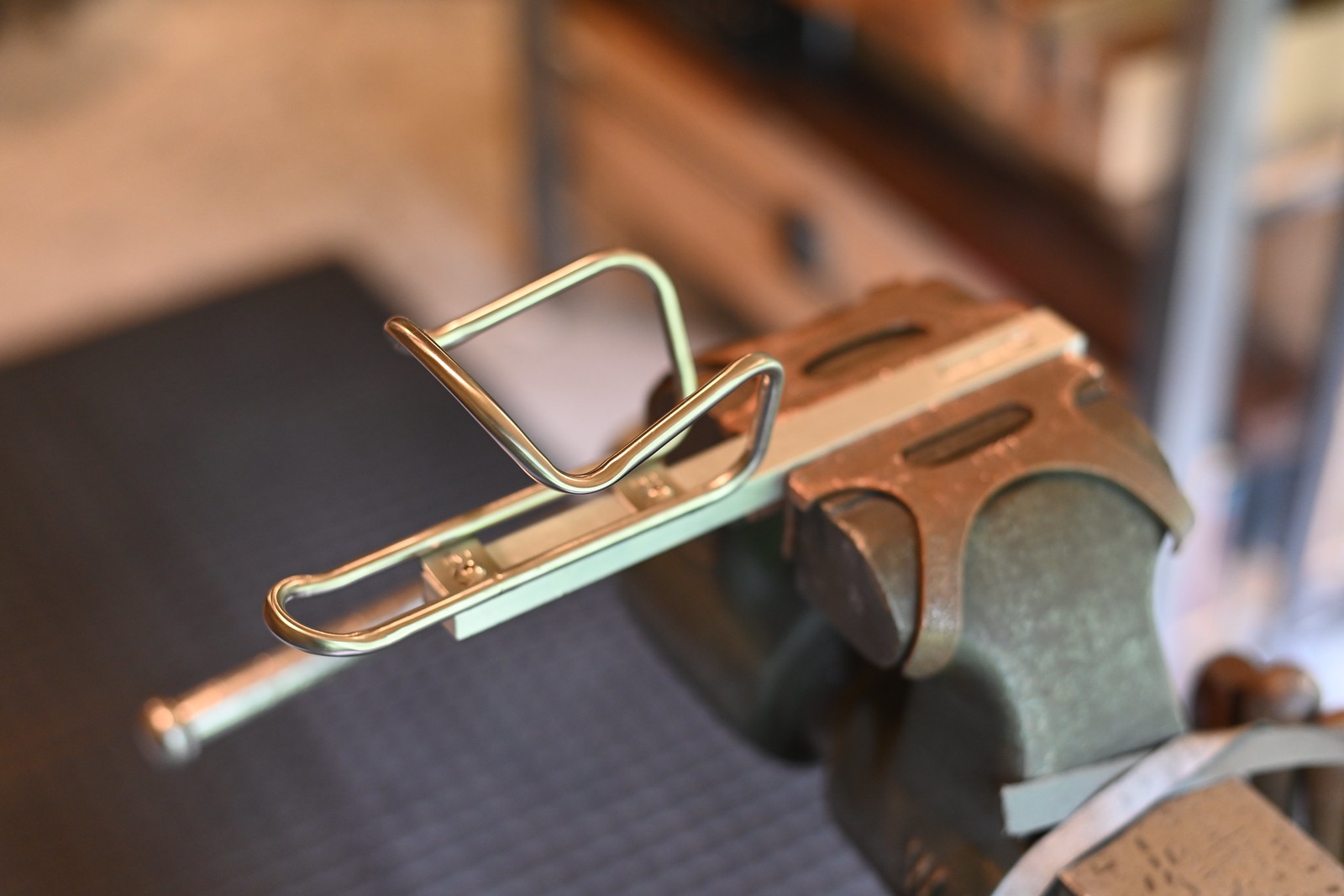 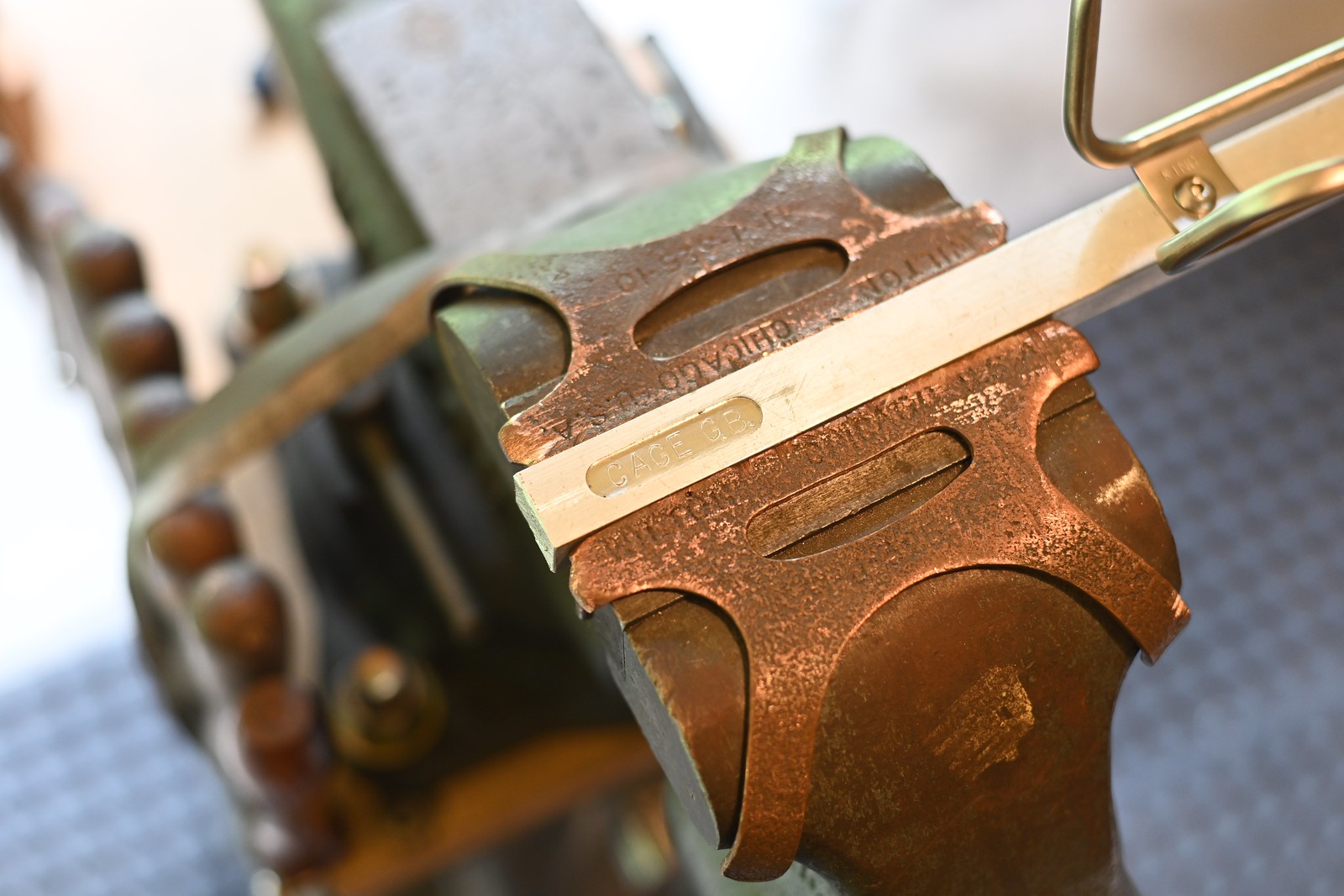 I needed a way to hold them, so I made a quick tool which I nicknamed “Cage-GB”. It’s the little things. 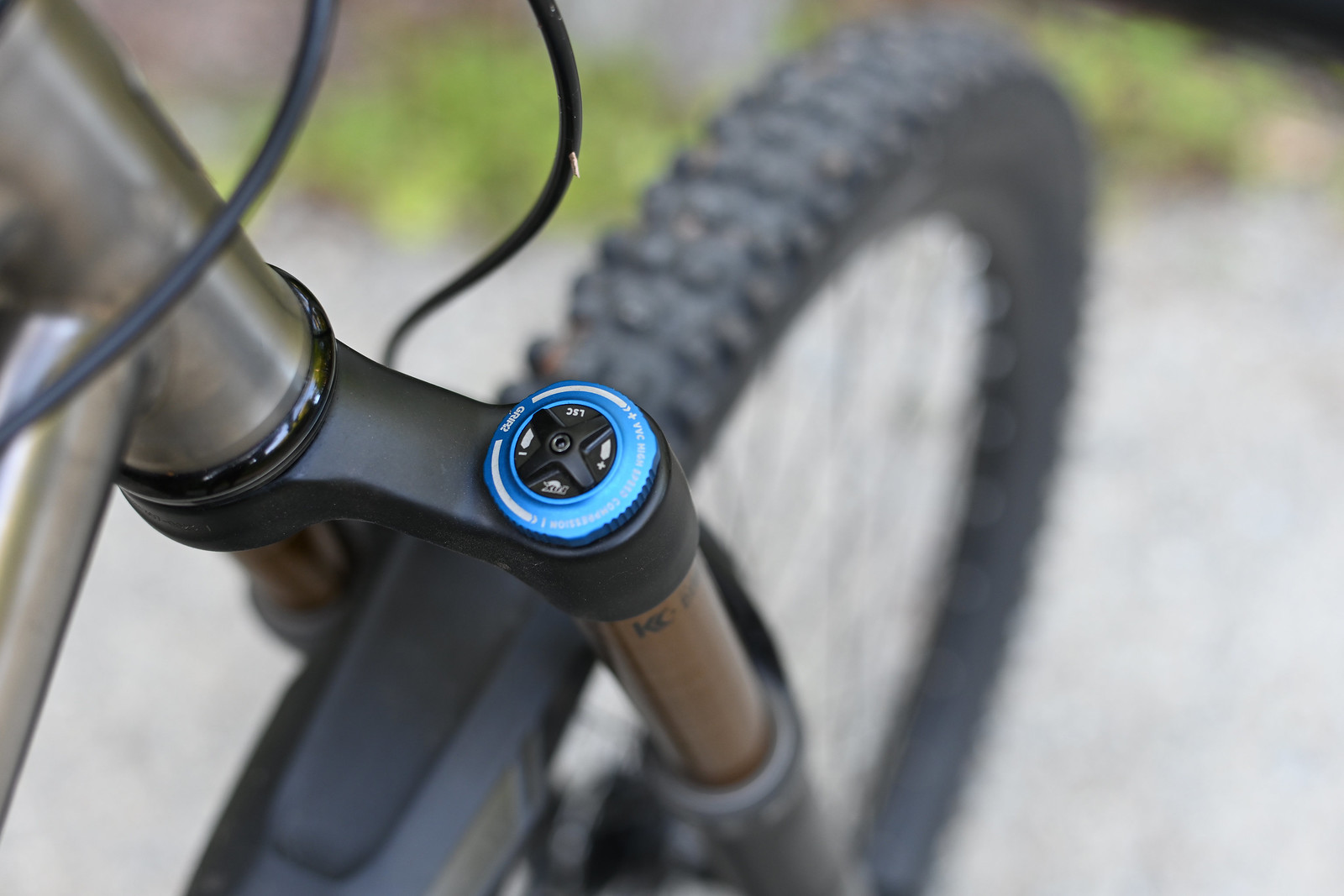 The next one is big. HUGE really. Grip2. Fox released a fully redesigned line up of forks, shocks and posts earlier this year. One of the little tid bits was that Grip2 was now available for all 2017 and newer forks… My fork was a 2018. I’d been curious about Grip2 but I’m more of a set and forget kind of rider. The Fit4 damper was treating me well but what would that added adjustability give me? Well, after doing the swap and install and then finding this set up guide by The Lost Co., and then methodically setting up the fork and dialing things in over the course of about 3-4 rides, holy cow was it an improvement. The fork literally hugs the ground now and parses small bumps, big bumps and chatter so much better. The bike really floats over terrain now and the fork really handles all the different situations on-trail so much better. It’s more better. Having the ability to dial in both high and low speed compression, high and low speed rebound, air pressure and air volume? I can’t recommend this upgrade enough. It takes a few specific tools and it’s a few bills but if you are looking for something to further tune your ride and you’re currently riding a 2017 or later 34 Fit4, again, I can’t recommend this one enough. It completely transformed how my bike handles.

But enough of this details stuff. Lets see some money shots! Here you go… 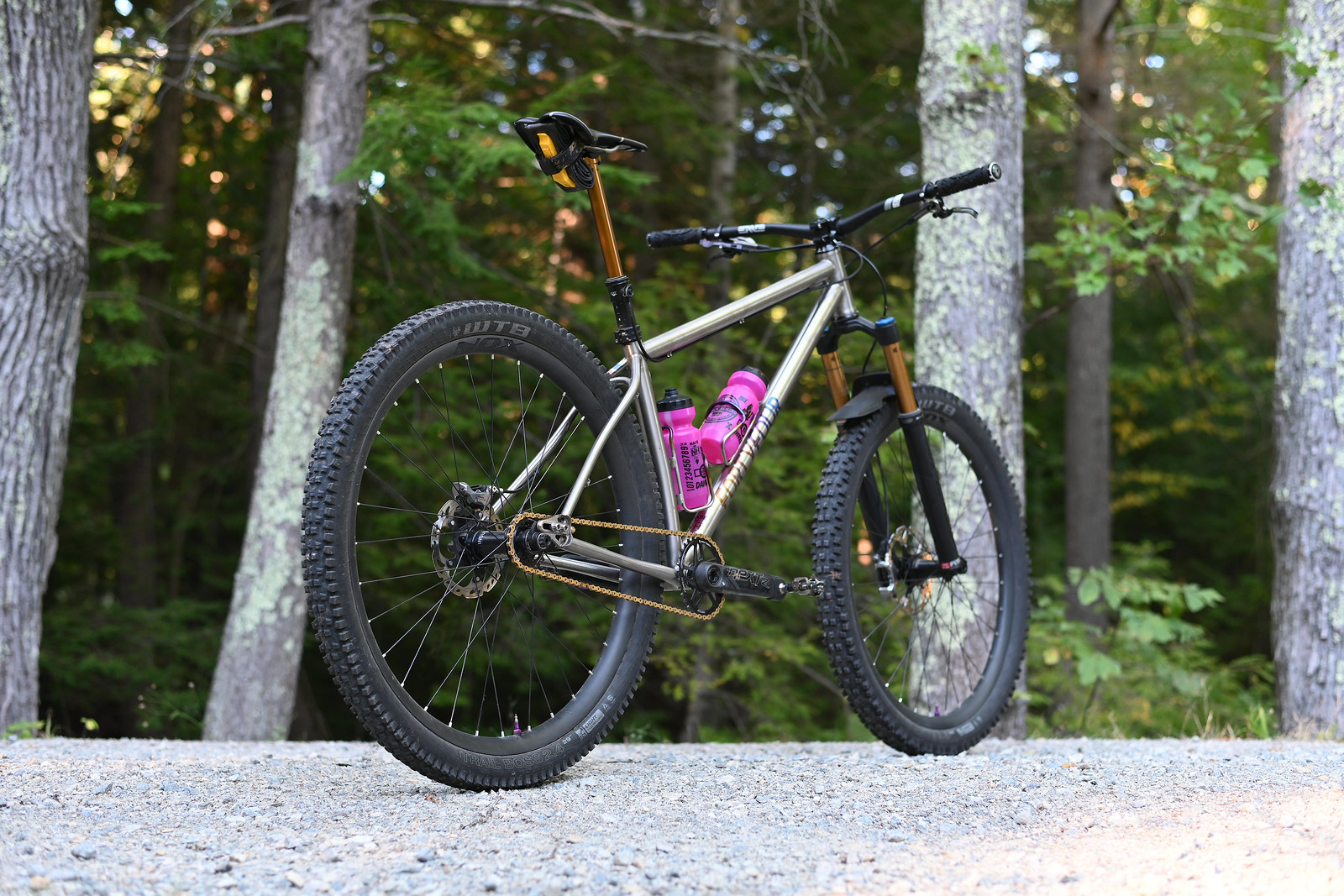 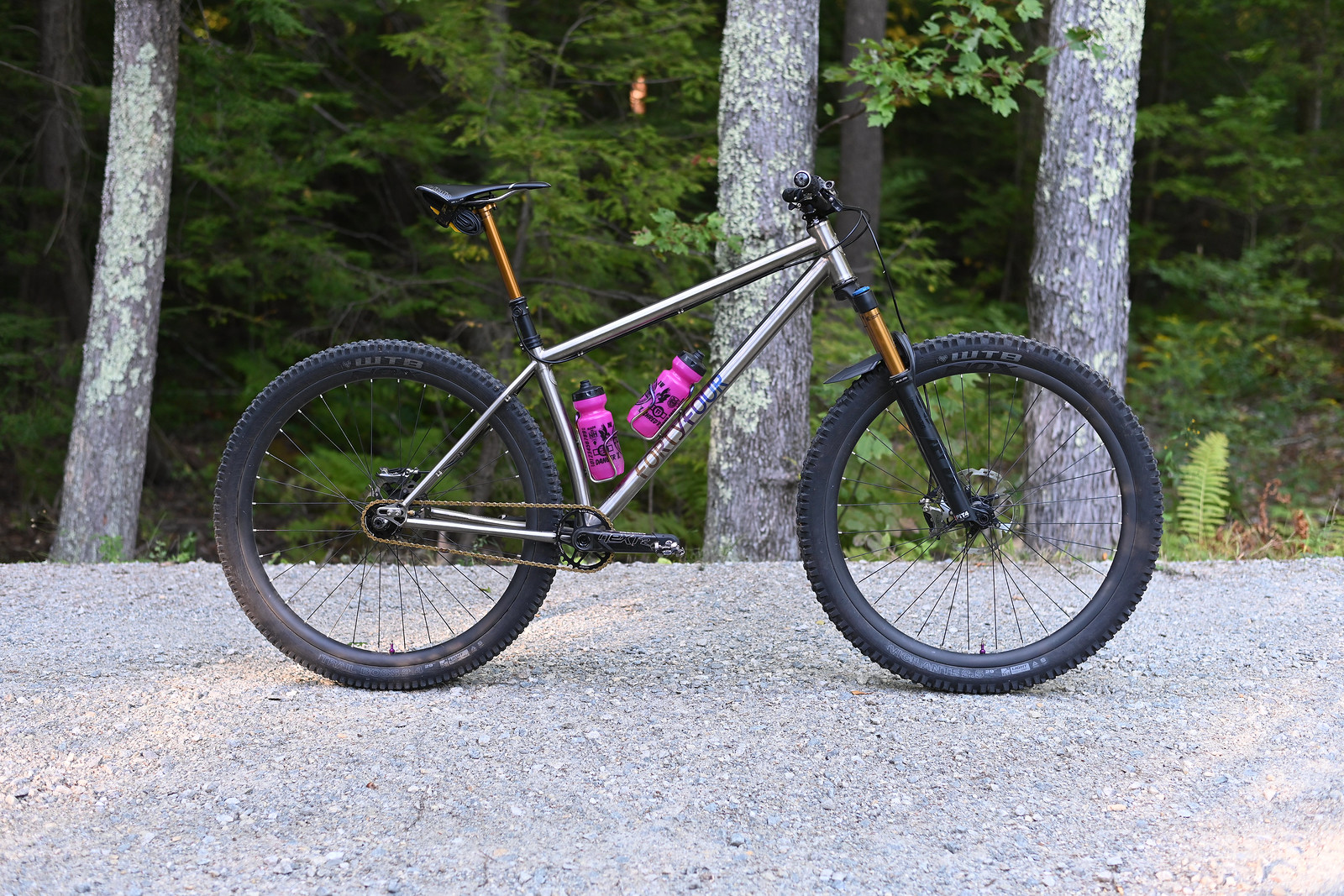 And one last shot. 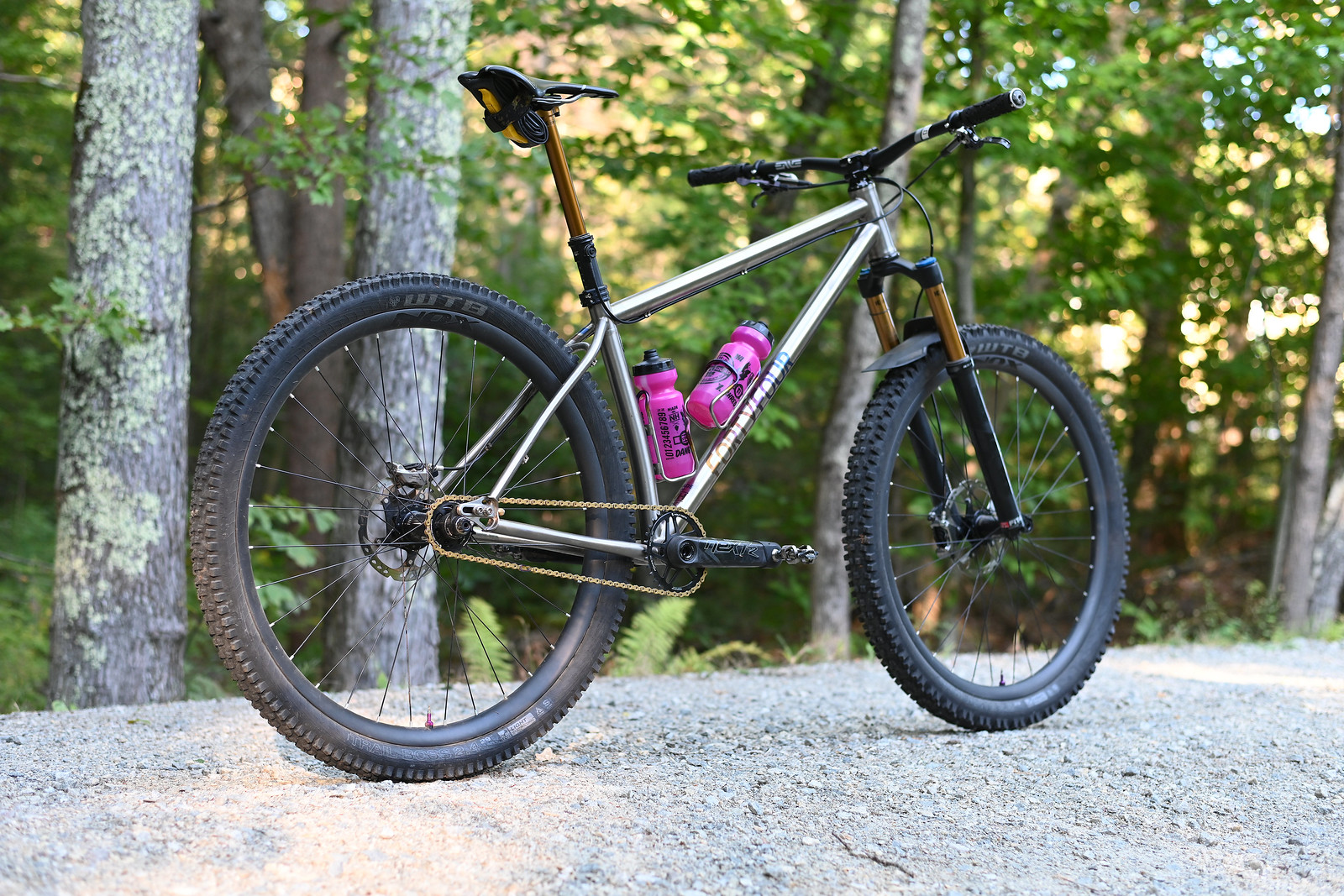 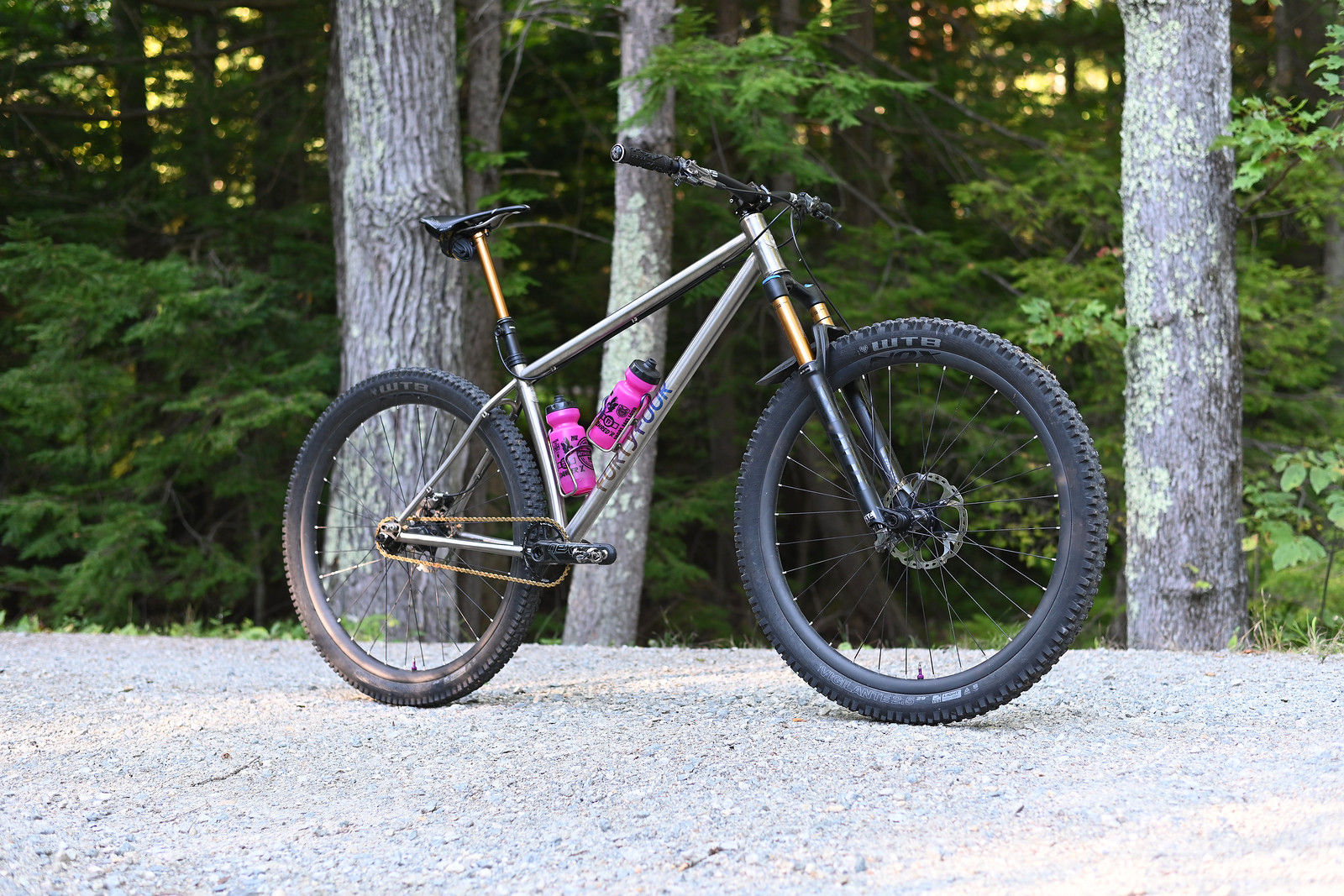 Till next time, stay safe and keep pedaling!