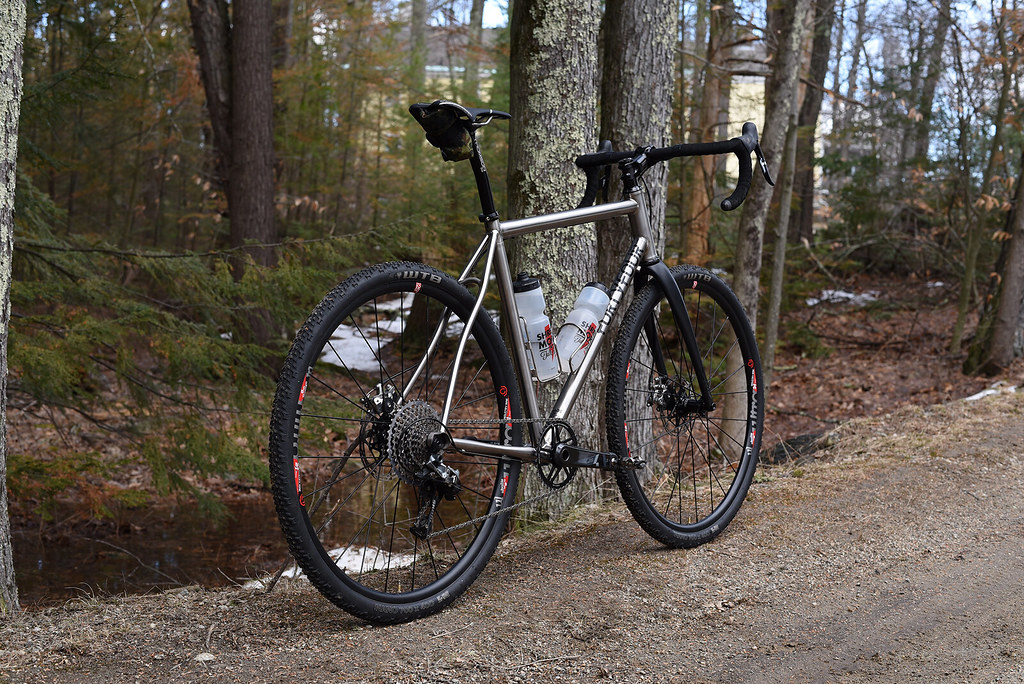 Late this summer and into early fall, I completed my first pair of Titanium prototypes. One Marauder SS and one Huntsman 1×11. I actually finished the Huntsman first but forged on as my excitement built around my first titanium mountain bike… After all, I am a mountain biker at heart. Well, that left the Huntsman to be faced and chased at a later date. I had some time on my hands between some builds these past few weeks so I chased the bottom bracket one week along with a pair of client builds and then reamed the head tube on a separate weekend morning when I had some time. Then came the job of reaming the seat tube, which I started but realized that the inserts are a bit on the dull side so I was waiting for a new set to arrive (which they did). So I was finally able to finish reaming the seat tube on this prototype Saturday morning which meant I was going to build it up over a cup of coffee in the Bike Dojo and head out for the maiden voyage. Spring is on the horizon here so sticky peanut butter like mud was to abound. Which it did and made for one heck of a workout. What’s interesting about riding prototypes is that I get immediate feedback and can make mental notes to be funneled into the next build. Which is interesting to compare expectations with reality. This happened with the mountain prototype where I found I was originally going to change up seat stays and top tube diameters but after riding that beast decided I may actually change out the diameter of the down tube only. Same thing here with the road prototype. I’ll be changing out the down tube and possibly the seat tube. Down tube will go up from 1.5 to 1.75″ OD and the seat tube will go up from a 1.25″ OD to 1.375″ OD. The seat tube is more to do with the process end of things to incorporate a shim to reduce the amount of time reaming. I’ll also be working on some new tooling to automate face/chasing the head tube and reaming the seat tube. For the record, the bike was built identically to my steel version in terms of fit and geometry. The differences were in tube diameters with .875″ OD chain stays, a 1.25″ OD seat tube and 1.375″ OD top tube. Down tubes were both 1.5″ OD’s between steel and titanium and based on how smooth the ride turned out to be with my mountain bike I keep the seat stays .625″ OD. And those shaped .875″ OD chain stays proved to be just as stiff and snappy on the road coupled with that smooth, buttery feeling I was getting with those .625″ OD seat stays. And as you can see from some of the images, the bike didn’t stay clean long. Over the course of the next few months I’ll be building another pair of prototypes now that I’ve gathered a bunch of feedback on the Marauder and soon to acquire more from the subsequent time I’ll be putting in on the Huntsman Prototype. In all likelihood when I build up the 2nd Huntsman prototype, the first one will head to a friend for some additional feedback as we’re just about the same size/measurements for inseam and height.

What’s taking up most of my time with this material is just weld time and practice. It’s a highly competitive market and I don’t want to release the material to clients until I have everything dialed and that includes supply chain which is proving to be difficult, and possibly complicated with the new administrations threat of imposed taxes on imports. It’s tough to say how that may effect costs of titanium and raw materials and domestic production is incredibly tough to meet with the low minimums someone like myself would require. Basically none of the large manufacturers want to speak with you. I’ve reached out to additional resources so we’ll see how everything proceeds. In the meantime, I’ll be putting more time on this Huntsman prototype and I’ll have a full review for everyone to contemplate here. Till then, it’s down into the Bike Dojo to prep the bike for todays ride. That’s one thing about riding in NH on dirt roads in the spring: each ride is an event much like getting ready for deep sea diving. Which includes clean up and then prep for the next dive or rather ride in this case. It’s time consuming as that sand and sticky mud gets into everything and if you let it go too long because of the salt in the sand from winter… it can wreak havoc on components. So it’s time for me to sign off and roll up the sleeves to prep for todays ride.