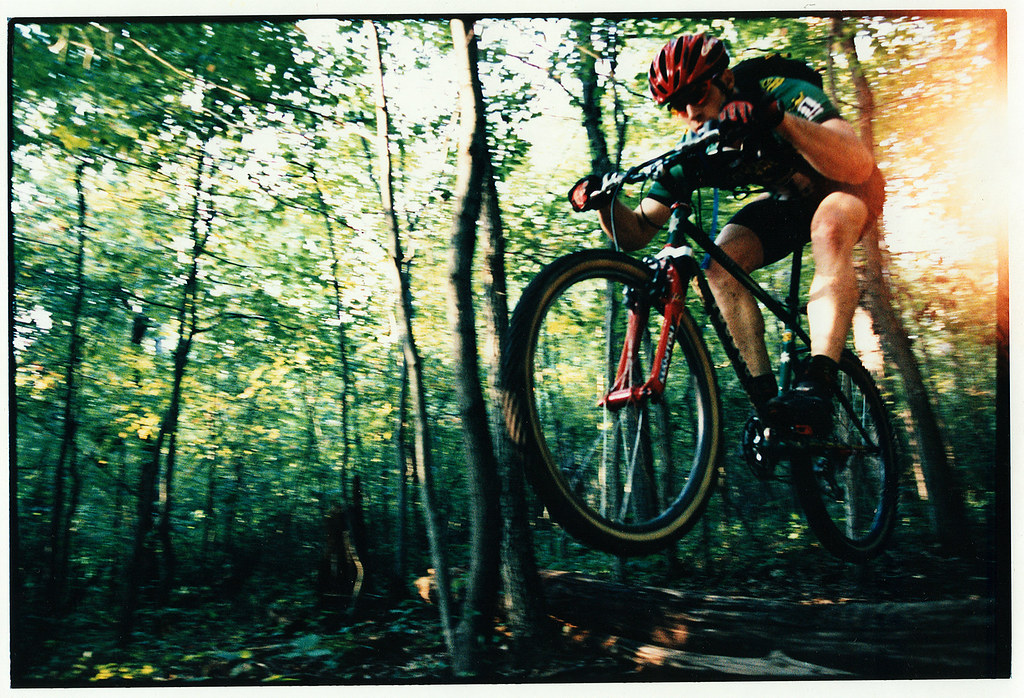 I started mountain biking sometime around 1989 or 1990. I had been riding road for much longer up to this point and of course my fair share of BMX. Mountain biking combines the two nicely: Going fast and getting RAD. Finding mountain biking for me was like coming home. Saved perhaps. But my first mountain bike was a Trek 830 Antelope. Florescent yellow with black splatter paint accents. I saved for months and still didn’t have enough… My Dad took me over to T-Town Cycles in Trexlertown, PA and said he’d make up the difference if needed (which he did – what a pal). I rode that sucker to hell and back again until she finally cracked up by the seat stay / seat tube. I had a local shop in State College, Pa part out a Specialized Stumpjumper frame (Their M2 Aluminum frame) and this time I did not need help as i was working as an apprentice goldsmith. I rode that hard until happenstance occurred one day in 1998.

I had graduated from Penn State and was home for the summer trying to figure it all out. I had gotten a job at a local bike shop (Nestor’s Full Cycle in Quakertown, PA – the sister store to the original Allentown shop location). We had demo’s and my shift did not start until noon on one day so I went out for a solo morning ride not far from the shop which was South Mountain in Emmaus, PA. I was out on a full suspension bike and caught up with a group from Rodale Press. It turned out they were from Bicycling Magazine. We got to chatting and they joked “Don’t let us stop you, we’re gabbing.” So I kept going but eventually we met up again at the top and got to talking again. Questions started flying and the next thing I knew I was speaking with Chris Neyen, the art director of Bicycling Magazine. Long story short: We started talking graphic design and he said I should give him a call, set up a time to visit, and bring in a portfolio. HUH? They left and I was still holding my helmet wondering what the hell just happened. Well, I hand delivered the portfolio the next day, got a call later and Chris and I hit it off. We’re still friends to this day and keep in touch. But Chris saw something in me and gave me a shot. I helped out with graphic layout, photo shoots, building demo’s and everything in between. Mountain Bike Mag. was just down the hall and asked Chris if he knew if I could go along for a shoot/story.

So I packed my bags, and the writer and I along with a photographer went down south in search of the articles content. The photo above is from that day back in 1998. Kind of a whirlwind of a memory. Getting paid to ride your bike, help out with writing an article and have a photographer ask you “Hey can you ride that line one more time?” Hell yes I can! The above was given to me by the then Photo Editor Steph Albanese. Not sure of the photographer’s name, but it was an out take of sorts and actually, out of all the shots taken that day and ones that ended up in the article, that one was my favorite. Kind of captured the moment “just so”. Light fading, muddy and sweaty, one last line to rip and one last try at a huge pile of logs. Hit the throttle and launch yourself over 2′ in the air. Nothing finer I have to say.

That was on my beloved Voodoo Bizango (And if you look closely, the front hub is not of common make – that’s one of a handful of “prototypes” I machined myself and anodized it myself while I attended Penn State). I ordered that direct from them and they had a few “blem’s” left over. Something to do with the paint. Didn’t really bother me, it was a Reynolds 853 steel hardtail. First ride out and man, I was hooked on steel again and it honestly set the hook firmly for what would become my material of choice for when I started 44 Bikes.