In early September, I started a new fat bike prototype which had been scheduled into the list the previous season. After riding a full season on last years fat bike prototype, I had a few things I wanted to tweak. By the beginning of October, the bike was assembled and then the wait began. The wait for snow. A year in the planning. That takes patience of which I have a healthy amount. Well, I left for Thanksgiving a day early as all hell was going to break loose up here. Apparently it was the 3rd largest power outage in the state of New Hampshire’s history? We lost power for about 4 days. I returned to “lights out” from my trip down to PA to visit my family. However, when the sun rose, I woke up to this: 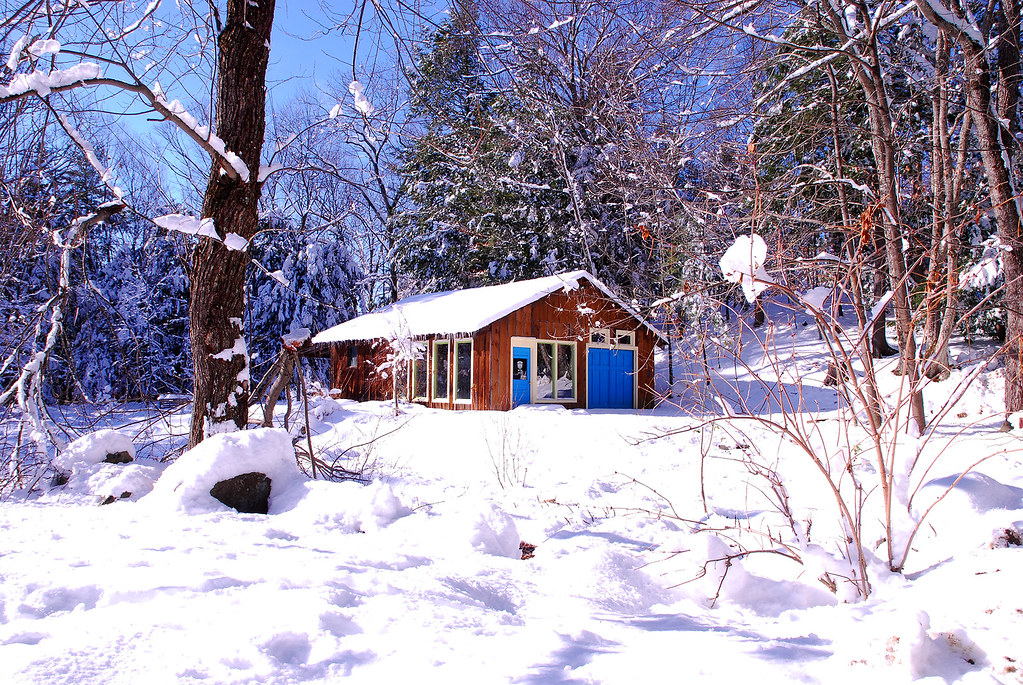 Nothing like waking up to a literal winter wonderland. That’s what I just love about New Hampshire: Winter happens. It’s not some “sort” of winter. It’s winter. It snows and it’s just magical (I can’t stand that word, but it really paints a visual picture very well – it is really magical). Snow was draped over all the Hemlocks and stacked high and deep. That meant lots of snow shoveling… So we dug out: 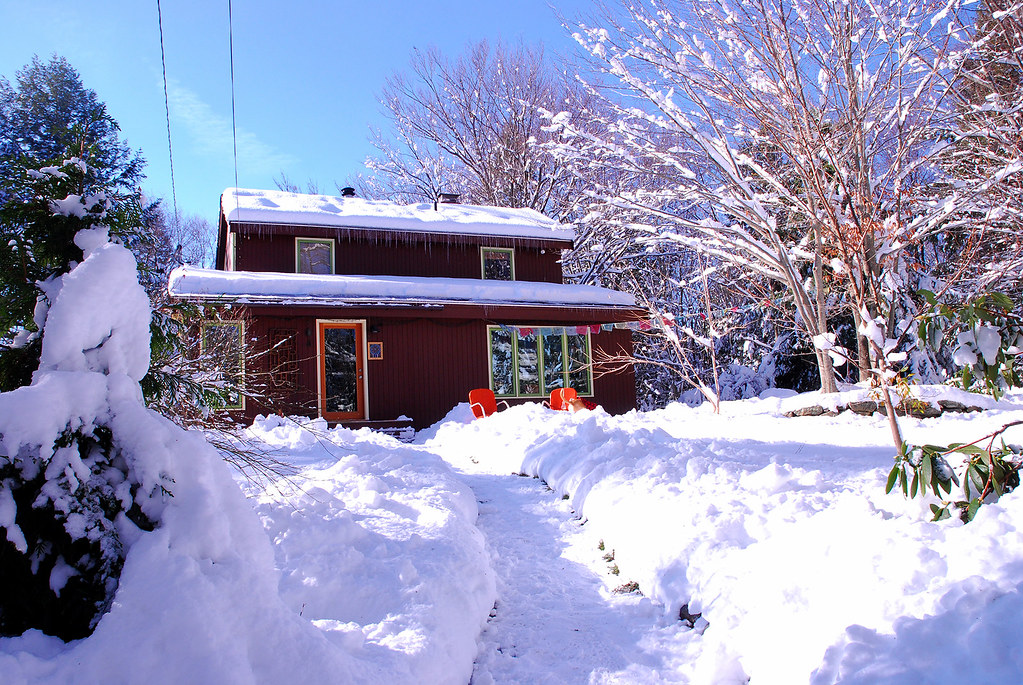 And then it was time to GET OUT. Finally. Lucky No. 40, the one built in September and decked with all the best trimmings and slathered with all my new geometry tweaks was ready to hit the trail. Hit it we did (and a little blurry possibly from a good mix of excitement and shaky hands plugging along in fresh powder). 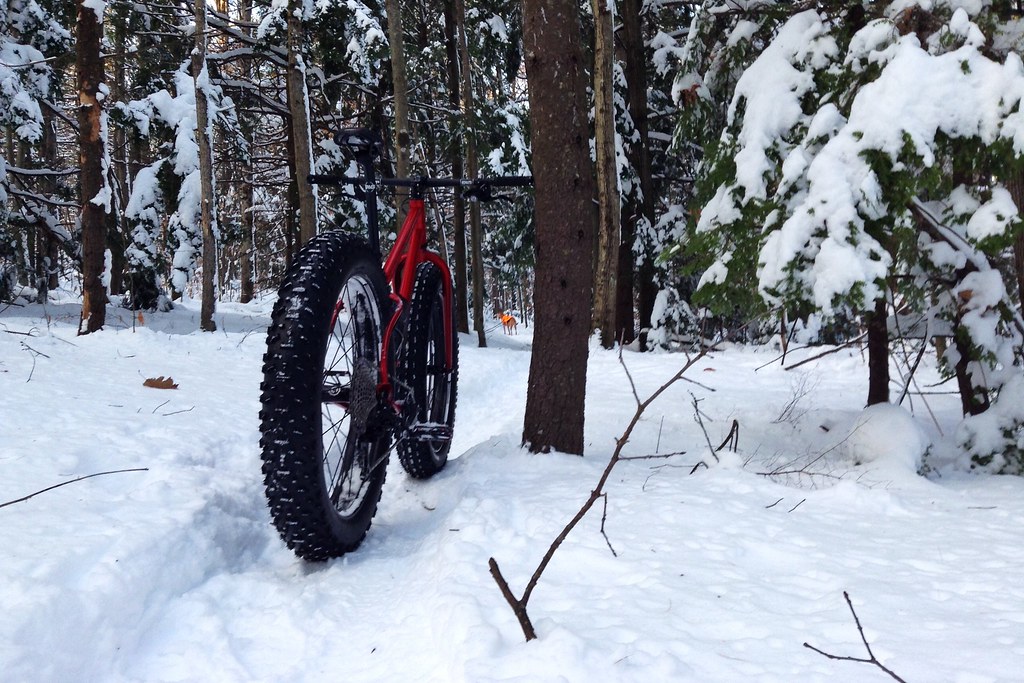 First couple pedal strokes I noted that this beast goes. Stays planted and holds her line. Previous versions all have become gradually “more” planted. Basically, my under or over steering needs have been diminished and the bike moves in a straight line more readily instead of wandering so much. On a fully groomed trail, one that is packed and prepped, this never has been a problem. All the bikes have handled just fine there. It’s when you get into conditions like the above (and below) where the trail is narrow, it’s been walked on or skied on OR hasn’t been prepped at all or very little to speak of that the bikes would start to either wander or take a bunch of effort to keep on track. The previous version was a huge improvement in this case. This version even more so. A slightly slacker head angle, longer chain stays (and wheelbase) as well as a lower bottom bracket height all came into play to keep things moving forward.

Oh yeah. That’s all I have to say about this next picture… 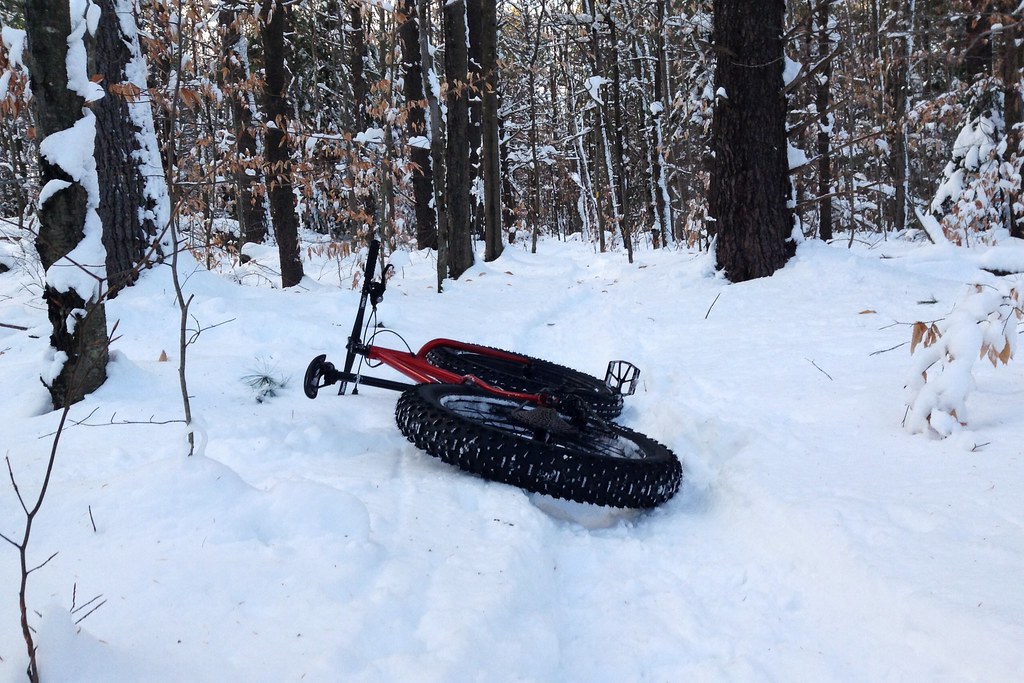 Thick woods. Thick snow. I’m out riding my bike in both of those. Sram’s XX1 system is killer. That big dinner plate out back that Sram’s 11 speed offers is just amazing. I run a 28t ring up front and it keeps things moving just nicely. I have a lot of range just to keep moving forward and it shifts like smooth butter. I treated myself to a set of I9 / HED Big Deal Rims for my 40th birthday. I9’s engagement is second to none and it’s there when you need it. One thing with fat bikes in conditions like these from a dead stop is you kind of need to hop on the bike, balance for a split second and then stomp on the pedals to get forward momentum. That near instant engagement gets the wheels turning quickly and when the snows piled high and deep, this can make starting on an incline a lot easier. I found myself not having to walk a few paces up the trail from a dead stop as before as often. Although the jury isn’t fully in with their decision, I still have a full season of fat biking ahead of me, but the first ride out I was very happy with all the changes and thought that went into those changes. Build. Ride. Repeat. That’s something I thump on a lot here at 44HQ, but it makes the bikes better. No matter what you do, you gotta roll up your sleeves, get your hands dirty, and actually work with the end product in your hands. That’s how you produce only the best product you can through constant testing and refinement. I’m stoked winter is here. Even more stoked to get out tomorrow after I finish up a few jobs around the house. Till then, get out there kids. Find fun and ride your bike.