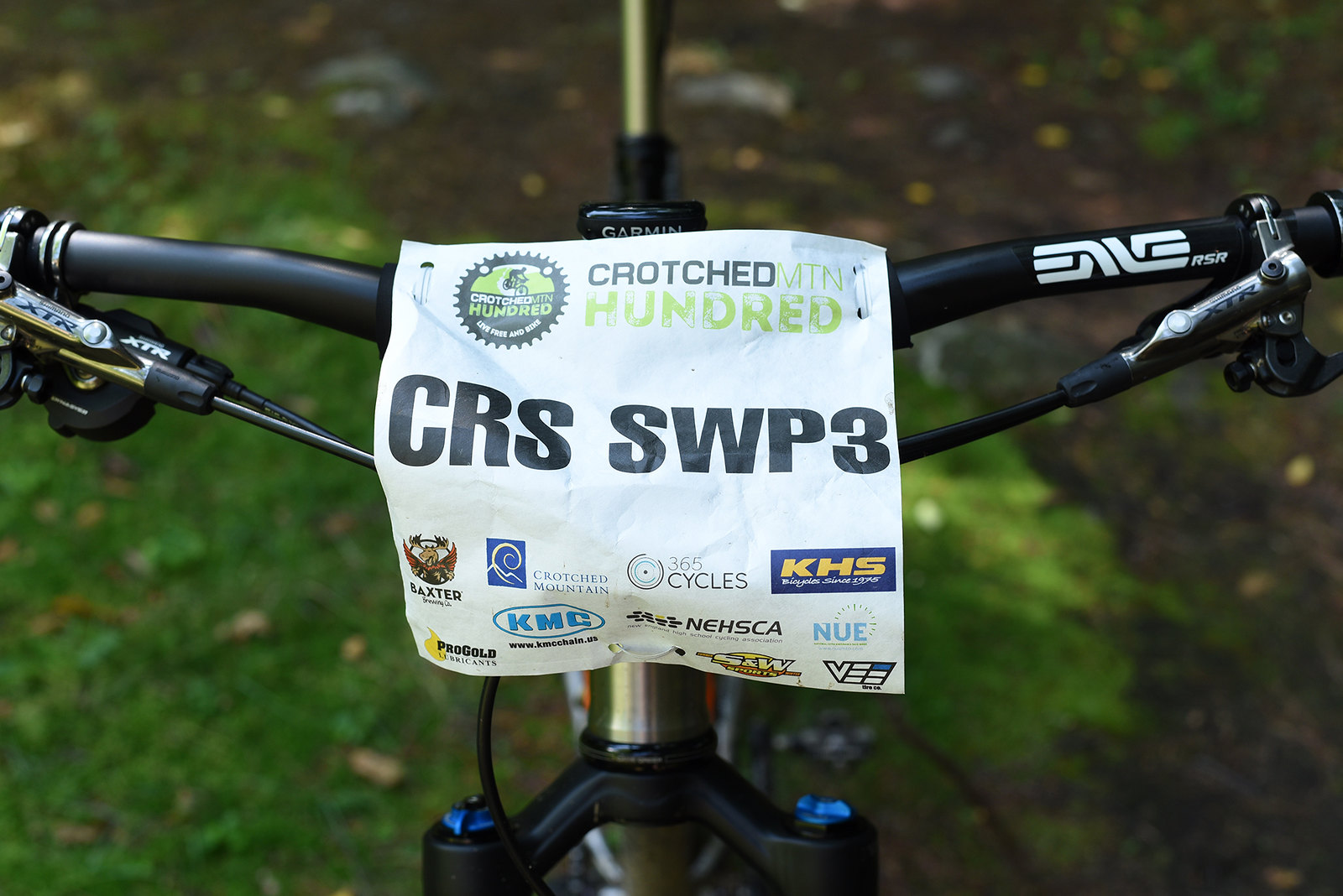 Each year I do a bit of volunteer work locally to give back in some way to the cycling community. I’ve been helping out with simple stuff with the Hampshire 100 / H100 (Registration & Sweeping courses) as well as helping with the Rose Mountain Rumble / RM,R which is a fundraiser for local conservation efforts through cycling. With the switch of race direction to Crotched Mountain for the former H100, I was able to offer up more help so they put me in charge of organizing all the sweeps this year for the Crotched Mountain Hundred / CM100 and putting together a plan to solve issues that have popped up in the past for the H100. Mostly that sweeps were out late into the night because they had to sweep the entire course. Which is ok but we’d have to leave around 4/5pm in the day after the last racer crossed the line. This just makes a long day even longer for everyone because the sweeps are telling all the volunteers, course marshall’s, aid station volunteers and police they can go home. But if you’re leaving at 4pm, you have 2 hours essentially before the sun goes down and the lights come out and you’ve got volunteers on course waiting to go home… and it takes most riders a good 4-5 hours to complete. So the chances of you riding in the dark are high and helping a rider who doesn’t have a light are even higher.

Pretty much each year, I never bumped into any racers. But with the move to a lapped 33 mile course, it made a lot of the logistics with the myriad of towns, land owners and volunteers so much easier. The course has a really nice flow to it now with the move of the start/finish to Crotched Mountain where you have a nice warm up, head into 12 miles of technical single track and then have a nice long 10 miles of dirt road, double track and mixed fun single track back to the mountain. So we broke the course into approximate 3 x 10 mile sections with precise departure times so that teams of sweeps only had to focus on 10 mile segments from full service aid stations positioned at intervals throughout the course. The result was a much more thorough assessment of the course and a bit more precision with determining where the stragglers were at the end of the day and getting everyone home before the sun sets. Which makes a long day just a bit shorter for everyone involved and with teams leaving at 4:15, 5:15 and 6:15pm sweeping those 10 mile segments between full service aid stations, and firm cut off times in place, you’re essentially closing gaps of any riders left past the cut off times between stations that can escort them back to the mountain. The center section of the course is the most fun which has about 12 miles of single track, so I gave that one to two other sweepers who wanted to rip. I headed up the last team and a husband and wife lead everything out and decided to jump onto the course after their 10 mile segment was finished up. Bringing everything home before the sun went down was a bit special this year because I helped a 65 year old rider who was completely exhausted finish.

When I left, there were only 3 riders in front of us and one had left about 20 minutes ahead. Bib number 88… and looked pretty tired so we noted bib numbers and knew we’d be catching them along the way at some point to assess if we should sweep them to the next course marshall to be pulled or help them finish. The last 10 mile section of the course has a nice 4 mile warm up before heading into double track through some freshly logged forest. My sweep partner Missy was good company so we made our way up and through the dirt roads chatting, warming up and climbing Muzzy Hill. Through the double track section of logged forest which produced some choice mud holes along the route and into our climb up to the backside of Crotched Mountain.

As we were twisting our way up through additional jeep roads and double track we happened upon a runner walking. As I approached I started my dialogue but the runner wasn’t listening. Watching their labored gait, I knew he was in his mental fortress of solitude soldiering that last bit of the course. Once I pulled up next to him did he actually acknowledge my presence. Ok. So I give him the “How are we doing?” and “We’re the last course sweeps…” pitch. Which gets his attention. He’s doing “OK”. I dig a bit further: “Do you have a light? Do you have food? Do you have enough water?” All of which was a check, check and check (most important was the light… the sun was starting to wane and I’m pedaling slowly as he’s walking slowly side by side. Knowing he was close to the finish, I asked him the 64,000 dollar question: “Are you confident you can finish?” He looked me dead in the eye and said with a smirk “Extremely confident.” I was happy with his answer and being a runner, you don’t take on a long run like that without a healthy respect of the suffering. So off we pedaled.

Just a short while later we pulled up behind that rider I mentioned above. He was an older gentleman and was walking at this point. Watching his feet I knew he was smoked. REALLY SMOKED. I’ve been there. I know what that looks like. My head was saying “this ones getting pulled” but my gut was saying, “let’s give him a chance”. So same routine of talking with the rider, asking him questions, assessing his condition and how together his mental state was. He admitted he was completely exhausted. So I simply said “well, we’ll ride with you till the next road crossing and if there’s a course marshall there, we’ll have a discussion”. He said “Ok”. He got back on his bike and we began to pedal together. But at a snails pace with that sun hovering over the horizon. My goal was to get back to the mountain before the sun went down but my priorities shifted to getting this rider out of the woods safely at all costs. He was in tough shape.

A few pedal strokes later, he went down into a huge muddy puddle as he tried to navigate it’s periphery. Some cuss words were exchanged and I helped him pull his bike out of the mud. More walking. More riding really slow. But we made it to a road section and a rider passed us who had refused the cut off time at the full service aid station number 3. Apparently there were words exchanged and we were aware of this one behind us from another course marshall earlier in the sweep. He was really fresh so he must have had a mechanical or multiple mechanicals to put him that far behind. As he passed and entered the course up ahead I noted it had a mile marker on it: You’re at mile 31. Ok. This guys got about 1.5-2 miles left. He can do this. He has to do this because there’s no one left to support him with a SAG Wagon and pick him up. That’s when I put on my cheer leader skirt and started to do a lot of pep talking. I got about a bikes length behind him and coaxed him along telling him “You got this!” “One foot in front of the other buddy.” And heaps of “YES!” or “Nice work” when he’d complete the simplest of moves weaving his way through technical sections if he could. I also repeated to him to play it safe and that there’s no shame in walking. The course section began to become more familiar as we got out of the freshly cut single track sections and popped out on top of the ski slopes. Shit, he only really had two sections left! That’s when I got ahead of him positioning the rider between myself and the sweep behind me. I’d pull ahead into a corner and start clapping and cheering as he came past me. Repeat. Each time he was smiling and laughing as I cheered and clapped his way through. This was big because smiles go for miles as they say and this was pushing him to keep putting those pedals down one at at time.

As we crested the last ski slope (which he hammered up surprisingly) and started our descent into the very last single track section I gave him one last “Ok, you can do this!! Finish strong boss. Finish Strong!” We wove our way down the twisting tech and I was damned if I was going to stop to put on my lights. Heck no! There was still enough light in the woods to see. I told him to play it safe so he walked bridges gingerly, and any corner or tech he was sketchy on, I just told him “no shame in walking that”. I’d hold a track stand and wait for him to walk and I’d roll it slowly or walk it with him. And then we emerged from that last bit of forested single track: There was the pavilion! I saw the remaining crowd of volunteers and racers waiting. So I shouted “Last rider coming through! GIVE IT UP! GIVE IT UP!!” Everyone started cheering and hooting. It was a heck of a sound to come home to, especially for that rider. He smashed that last little climb and it was a coast down and through one last turn and bridge. I cheered him on each pedal stroke of the way and he made the turn and bridge just fine. I pulled up along side of him and said you was home and boy was he smiling. He said to me “You don’t know how much this means to me. Thank you for helping me”. And that friends is what this is all about.

We had a nice chat afterwards exchanging laughs and hand shakes. But what a way to finish up. And the lesson here is this: This is what we can accomplish when we work together. I know it’s just a bike race, but when we work together, and help each other to get to that proverbial finish line at all costs, we can accomplish great tasks and overcome insurmountable odds. I just feel really wonderful to have been where I was, when I was to be able to help a fellow rider through that tough situation and get them home safe and sound. And accomplish something they otherwise may not have been able to do without that help. 100k at 65 years old too. That’s incredible. But that’s the type of incredible what happens when we work together.