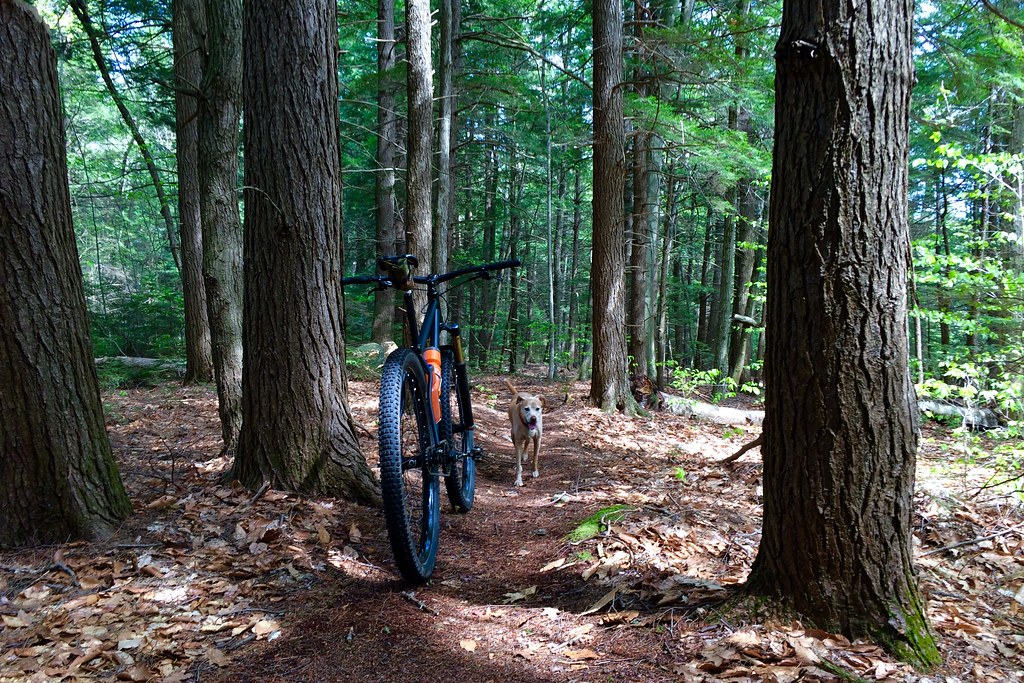 It never fails. New bike days still are the most exciting days for me. I dropped off the new Marauder prototype this past Tuesday and got the call Friday from my boys at Rev Limit Auto: “Frame’s done and she’s MINT.” Garrett knows how to deliver. So a quick drive over to Merrimack, NH and I was excited for the weekend (maybe more so than my usual excitement for the weekend). I was going to build it up Friday evening but decided I’d like to take my time with a cup of coffee on a Saturday morning after breakfast in the Bike Dojo. So that’s what I did. This one’s built as a Single Speed with an option for a 1×11 drivetrain (not the other way around). Things go together quickly when you’re building a Single Speed which is kind of nice.

I decided Saturday would be a good day for a shorter shake down ride on what I like to refer to as “The Sayers Loop”. The Sayers own a good tract of land in Greenfield, NH which are home to a vast network of local single track. This particular loop is on the shorter side but it strings together a lot of tight, technical single track with just about everything in between. So it’s a good measure of any prototypes salt. A great test loop without being too epic. It was also a great day because our pup Kaya was allowed to come along too for the ride. Her second ride out.

But back to the loop: A handful of rock wall crossings (technically 10 so I guess that counts as more than a couple), deep woods riding, some good short punchy climbs with lots of rocks and roots, one longish slow grind and it all ends with Sayers Descent. Not the longest descent but definitely long enough to wet your whistle.

What I wanted to get a feel for was just how the changes to the front end of the bike effected the overall experience throughout the ride and how that played in with the rest of the geo specs which basically remained the same. I did flub one rock wall crossing which had me putting a foot down and that little extra bit of standover came in to play right away. That was definitely a “redo” so I turned around and made amends with my previous mistake. The bike felt light and nimble. One thing I noted right away was how the front end lofted pretty quickly with this new set up. I’ll have to ride back to back rides with the 1×11 which sports a 90mm stem to see if it was just my “new ride” excitement but the 80mm stem made things snap up rather quickly. All was in order the entirety of the ride and Kaya was clearly having fun as well.

Hitting Sayers Descent, the bike really came into it’s own carrying a lot of speed and handling everything I threw at it. One thing to note is that the tires on this bike over my 1×11 sport a tad more girth and the rims are a touch wider adding to the tires fullness. The bike has a nice smooth quality to it because of this. Before I knew it we were back at the car and Kaya hopped into her favorite watering hole: 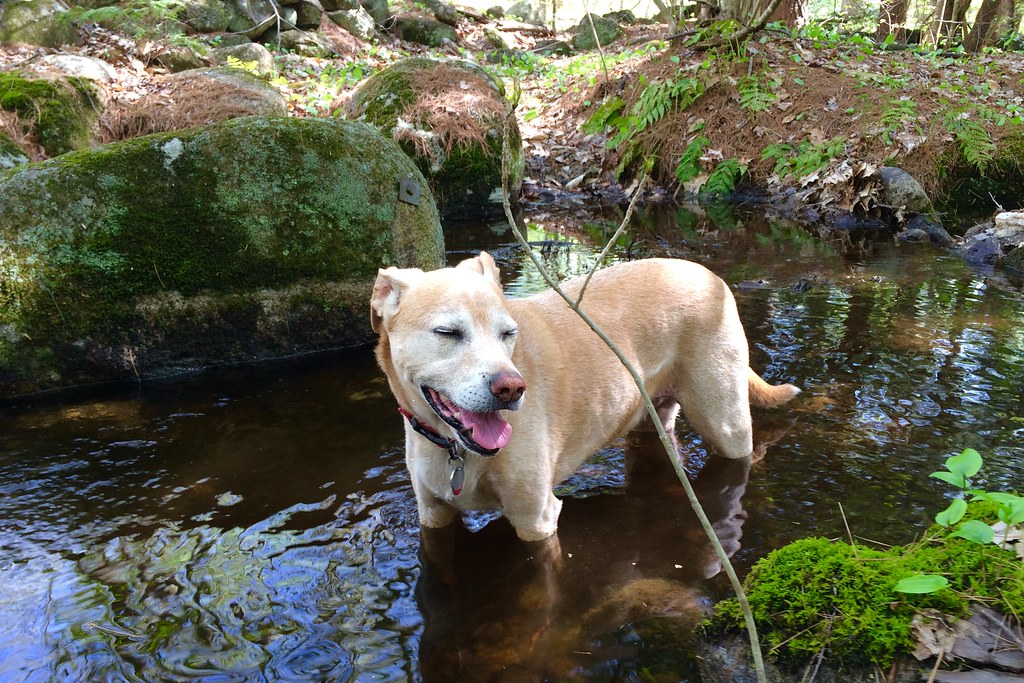 Sunday’s ride was going to be a bit longer and a solo ride too. I decided on what I call “Dale’s Trails” which are just behind the Railroad tracks that run through Greenfield and are across the street from Yankee Siege. Hidden but if you know where to look… These are a bit more flat but fun and fast with a good assortment of obstacles, bridges and it’s share of rocks-n-roots. 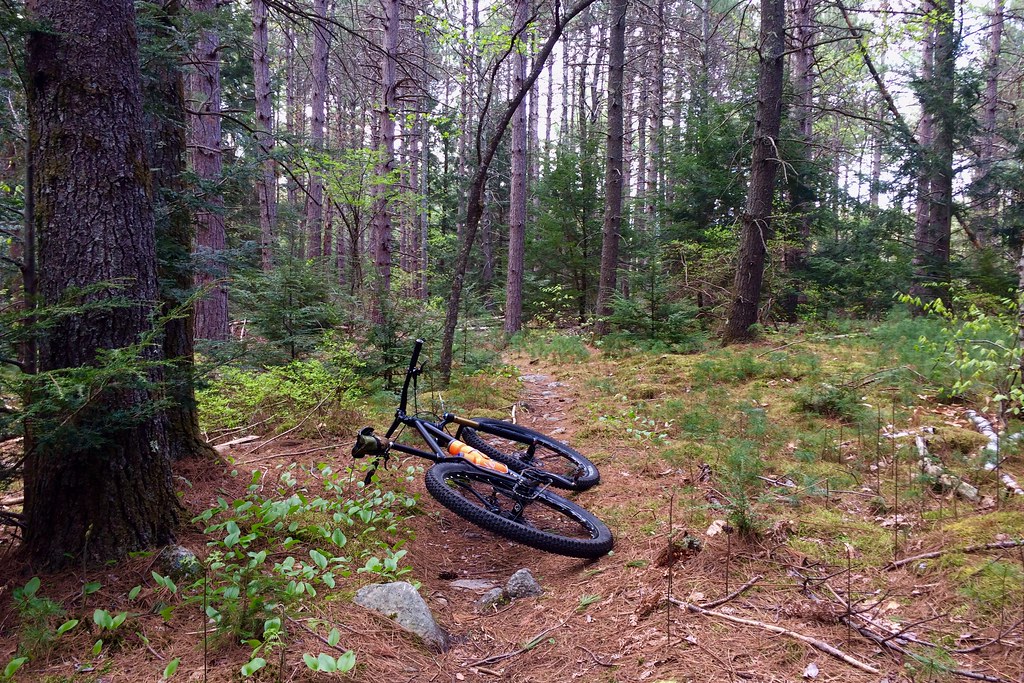 A little ways after this shot above I was coming hot into a turn when I saw a stick in the middle of the trail laying in line with the trail which can be trouble. Tried to correct but the front tire rolled over it and it kicked the front end out from under me. I went over the bars (which I’m no stranger to) and I was half into a run when that second feature next to the trail knocked me down: A nice big rock. Brushed myself off and looked everything over: Unscathed. Relatively with the exception of my right shin. I’m also not a stranger to banged shins when it comes to bicycles. Back on the bike, backed up to the top of the hill for the corner redo… and worked my way through the rest of the ride uneventfully this time paying closer attention to the trail ahead as it had been windy the night before so there was some trail obstacles that needed some cleaning occasionally (I put in time when I can on the trails).

Headed to the trail head I had decided I was slightly under dressed for the days temperature but once under the protection of the woods things warmed up nicely and I carried that through the rest of the ride. On the way in I noticed a side trail that leads from the railroad tracks had finally had a huge Hemlock cleared so I decided to do a loop which brings you to the tracks and then you can navigate a ways down the tracks to end back at this spot where the Hemlock had been down was cleared. A nice little loop which brings you back to where you started but adds a layer of some fun features and you get to ride a series of bridges where the last two end in a tight squeeze. Sometimes I get this and other times I bump into a tree. But I’ve learned to not carry so much speed over the first bridge which makes navigating that second bridge and this tight space between boulder and tree much easier.

Super fun weekend of riding. New bike with some new geometry to test out. Pup back in action. I can’t complain.