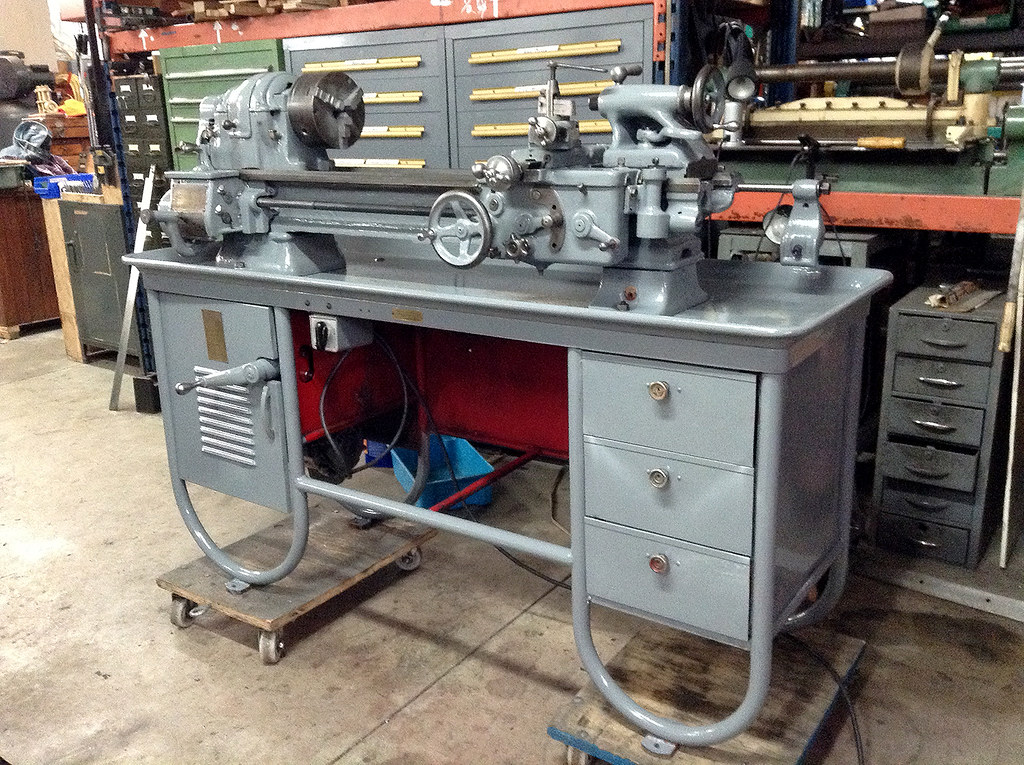 Ever since I opened the doors here at 44HQ, I’ve been on the hunt for a lathe. Specifically a South Bend Heavy 10. The reason for this machine is first they are readily available in New England, replacement parts and tooling are relatively easy to source and among other things: I just love the looks and feel of the lathe itself. The very first time I put my hands on a metal lathe, believe it or not, was in and around 6th or 7th grade. My middle school, Upper Perkiomen located in East Greenville, PA, exactly 1/2 mile from my front door, had a full wood shop and a darn near complete metal shop along with a small foundry. I donned a giant heat proof suit, gloves and helmet as I was one of the taller kids and helped pour aluminum sand castings with the shop tech, Mr. Raspen. He had us also doing slip castings as well as silk screening. This was also the first place I picked up a welding torch. Well, along that back wall lined with big windows were a row of lathes. I INSTANTLY fell in love with this machine and took to making projects on it with enthusiasm. Formative years to say the least and this is truly where I first got my taste of metal and made my first chips.

Fast forward to my days at PSU and again I found myself across the street from our studio’s on a small tooling room lathe in the machine shop spending long hours making of all things bicycle hubs out of 6061. I anodized these myself (the jewelry department there had a anodizer). Taking them to a bike shop, I’d have them laced up to test. I had not yet learned how to lace / build bicycle wheels. That would have to wait few more years! From here, and upon graduation I found myself back in school at RISD who has one of the best machine shops I’ve had a chance to work in. This is where I definitely worked with a slew of South Bend lathes. South Bend Heavy 10’s, South Bend 13’s… It was glorious and firmly set the hook for good old fashioned American steel. One thing that really stuck was cast iron’s ability to soak up the machine’s “noise” and produce a really fine finish. Something that is a little on the tough side to produce with newer gear head style lathes. The extra mass, and porosity of the older machines just can’t be beat (in addition to their belt style under belly motor drive’s too). They really reflect American production capabilities at the height of our days as a manufacturing based society.

So when I opened the doors here at 44HQ, a lathe was in order and it had to be a South Bend Heavy 10. Not to big, not too small: “Just So”. Sure I will admit that a South Bend 13 is most likely one of the best lathes I’ve worked with since it is on the larger side and is very stable due to it’s size and mass, but I simply do not have the space for a machine of that size. The trick though is finding one that is “THE ONE”. If you’re going to buy a machine and really put it into service, you need to know what you want, what you are going to use it for and understand it’s capabilities. So a check list is in order and the SB Heavy 10 or “10L” is just the right size. Sure there are better lathes out there, but I really enjoy working with that specific machine. So there you have it…

Fast forward to 1.1.2015: I got an email from Mike Flanigan simply stating “You need to check this out”. Hot tip in hand, I gave the fellow a call and through a little happenstance of someone else ahead of me being on the fence with no commitment to buy, I found myself face to face this past Friday with my lathe: 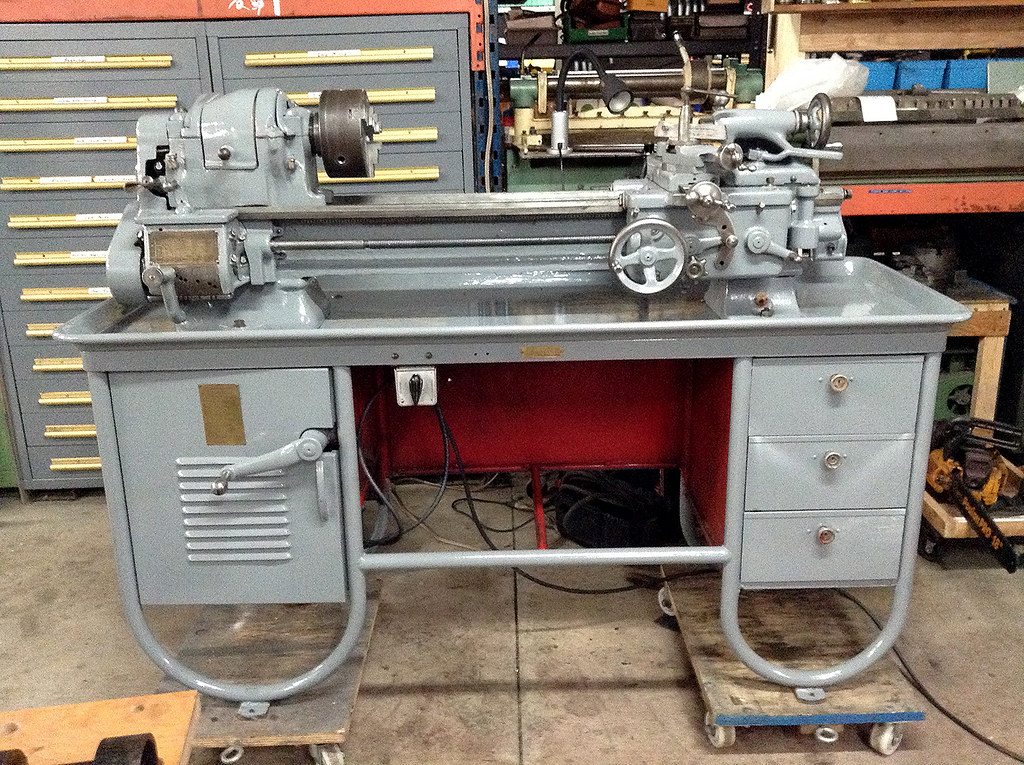 It had been pulled from a basement from “Someone who didn’t know what they were doing with it”. I call that “RESCUED”. To get it out of the basement, it had to be disassembled and subsequently the entire machine had been broken down, gone over with a fine tooth comb, painted and rebuilt. To say a lot of love went into this lathe isn’t doing it justice. One look and it was sold. Deal Sealed. She’s a Heavy 10 with a 1.375″ I.D. bore. Comes with a thread dial, 3 and 4 jaw chucks, dead and live centers, lathe dog and back plate, assorted tool holders/post (I have a Phase II wedge style tool post on the way) and has a taper attachment. Single tumbler gear box and the large direct read compound and cross feed knobs. The lathe is about 30″ between centers and sits on their older style cabinet. Truth be told, I would have preferred it to be on a bell with cast iron legs and chip tray but the fact that it was in this good of shape, had been completely torn down and had the thread dial and taper attachment, that checkbox was ok being “unchecked”. Sometimes, it’s ok not to have EVERYTHING you want. But this had everything I wanted so it’s AOK. The seller also had rewired the switch and motor and installed some vibration dampeners on the motor to keep things running smooth/quiet. Turn this on and let her hum. Single phase too so there is no need to do any phase conversion on my end. Just plug her in and go. She’s from the 1940’s, and once I have her back in place at the shop I’ll be able to get the serial no. and do a little research on her history. I was too excited to even take a measurement of the length or get the serial number when I was sealing the deal. So it goes…

With weather coming in Saturday through this Sunday, getting her here to 44HQ is a no go. Although it doesn’t look to be doing anything yet, I most likely could have swung it, but to be on the safe side (and knowing my luck sometimes), I’ll be picking it up most likely this upcoming week when the weather has definitively passed and the roads are dry. I can’t tell you how excited I am to finally, FINALLY be getting a lathe. This will really put some things in motion that have been taking some time to get rolling. There’s a lot of tooling projects that seriously need attention and this South Bend is going to be making some serious chips over the next few months. Really going to put her to work. A 5C collet draw bar will be in order too when I find one. But till then, I’ll be losing sleep over my excitement to pick up my lathe and get her in place in the shop. I’m going to spend a little time this Saturday rearranging a few things next to the Bridgeport to be ready when she arrives. I already had built up the shop and laid things out in this way so when the time was ripe, things would just shift and all would go into place. Basically it will be at a 45* angle next to and slightly in front of my Rinnai heater. So the Bridgeport and South Bend will be near a heat source which will keep them regulated in terms of temperature swings and help to prevent flash rust from forming. Not to mention if the machines are held at a relatively constant temperature, it also helps keep the shop regulated too (and keeps them accurate so they don’t have temperature swings too).

So there you have it. More when she arrives. Even more when I’m making chips!