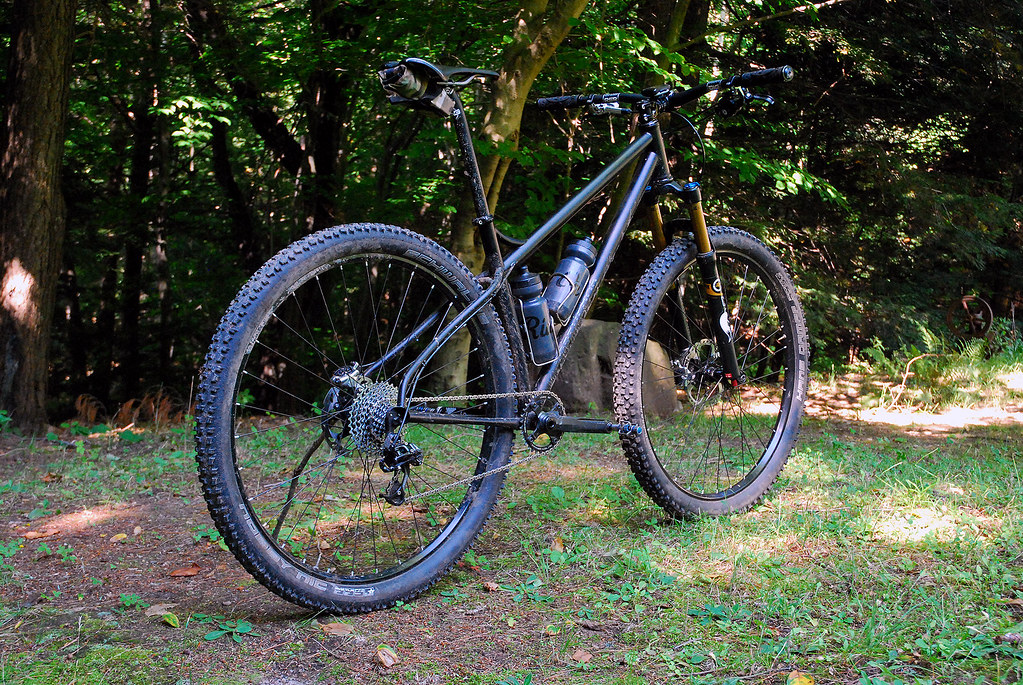 So this year I didn’t race the local event, The Hampshire 100. I figured (and wanted) to give back to such a great event so I volunteered Saturday to help out with registration. I had a few bikes on hand too, but it was more about answering questions, helping riders find their way and in one case: convincing someone NOT to duck out of the short track mtn. bike race because there were no other women signed up (and she did really well too against the men!). I also volunteered to lead out a group of riders saturday night to let them stretch their legs and I could show them some singletrack along with a little of the race course. That turned out to be pretty darn fun as many of the riders had some questions about the course and I actually could answer them. Mostly what the course was like and what New England tech was like. I even wound up giving a few some pointers for riding in tech as well as some golden rules for riding bridges.

I also caught wind that one of the most dedicated trail builders in Greenfield was going to be the only one sweeping the 100 mile course all by himself. Granted, it’s the last 40 miles, but I had been wanting to do a longer ride this past summer but haven’t found 5-6 hours to do it. This seemed like a great opportunity and Larry was stoked to have me along. I talked Franky my brother in law into joining us. He didn’t really need much convincing. So Sunday we showed up at Oak Park around 3ish waiting for the last 100 miler to come through to do their last leg (yes, if you race the 100 mile course of the Hampshire 100, you MUST cross the finish line and then go out for an additional 40 miles… Only slightly demoralizing). So when that last rider went through, we waited about 10 minutes and then we were off. Given that it was about 4pm, my body was fully awake and this is typically when I’m going for a ride anyways. None of this 7am ride stuff to do a race B.S. The first stretch is a long set of dirt roads mixed with a little bit of pavement before you head back into singletrack behind Crotched Mountain (which was sweet btw – Larry did an amazing job in those 3 sections – smiles all the way).

Given that we weren’t in any rush and we had to stop at all the remaining checkpoints, I decided that I’d try out some different strategies for my own personal reference. The biggest 3 being pace, food and hydration. I’ve been having trouble with cramping on some longer rides in the past all of a sudden. So I decided after an earlier ride this past spring (about 30 miles averaging 10mph) I’d use that same average pace as a gauge. So off we went just clicking along at 10mph. The other thing was food. Last time I was on a “schedule”. So every hour, I’d make sure I ate something. Sometimes this works, sometimes it does not. So I said “the hell with that”. I’m going to eat when I’m hungry and drink when I’m thirsty. I had two 20oz water bottles (Thank you Swallow Bicycle Works!): one with water, and one with a calorie powder added to it by Osmo, a little bit of food (2 Honey Stinger waffles, 4 Hammer Raspberry gels and 1 pack of Margarita gel chews). But the course is well supported so I didn’t haul a lot with me. Only the bare minimum (I’m supposed to get about 350 calories / hr, but in reality it’s more like 150 calories – this time I was not going to be “scientific”). Also I did not carry a hydration pack. That was at least 5-10 lbs OFF of my back. 2 bottles on the bike, the pump lived on the seat tube, and I have been using a tool roll with only the essentials: tube, 1 x tire lever, Park patch kit, Extra hanger, a small Soma multi tool, tire boot, 2 zip ties (small ones), an extra master link and inside the tube I rolled a small park chain tool. That’s it. I had my 44 Bikes Wind vest in my back pocket along with my food, and I decided to carry my light/battery (Dinotte) in my pocket as well and only put it on the helmet when it was too dark – so that got the weight off my head the whole ride. Also had my 44 Bikes “Skull Cap”. I find wearing a cap is enough to take the edge off of a cool night ride. Tool roll below (full set up above): 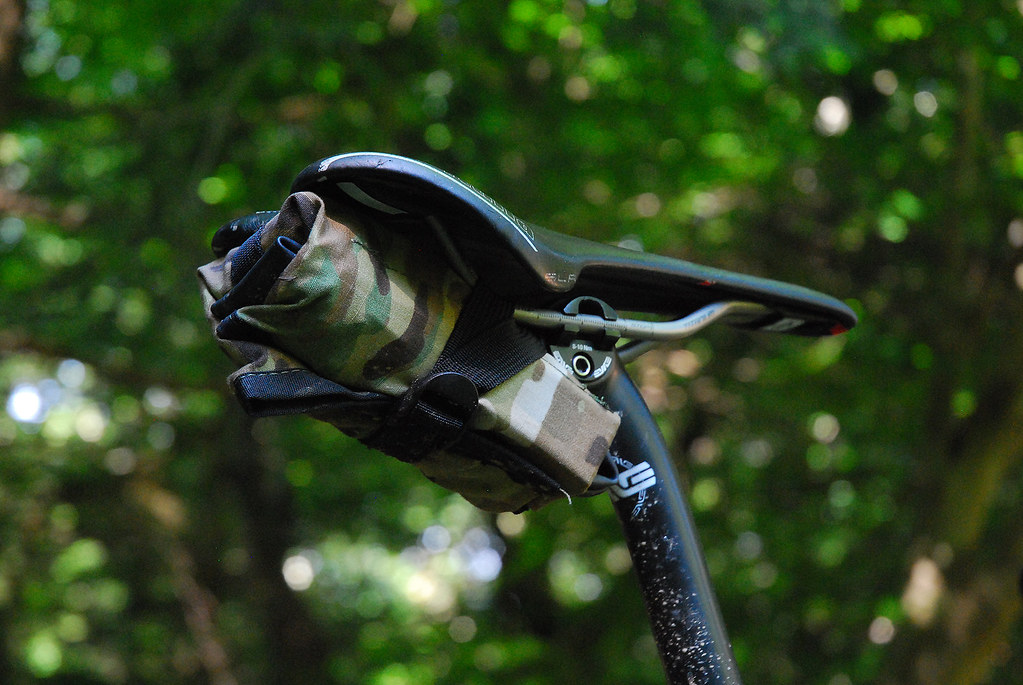 Also was the only one with a GPS and mostly so we could have an idea of where we were on the course according to the mile count – the 100 mile course shares some of the route of the 100k course. AND one section we did not want to enter the 100k course… That would have thrown us WAY off track and turned it into an epic. 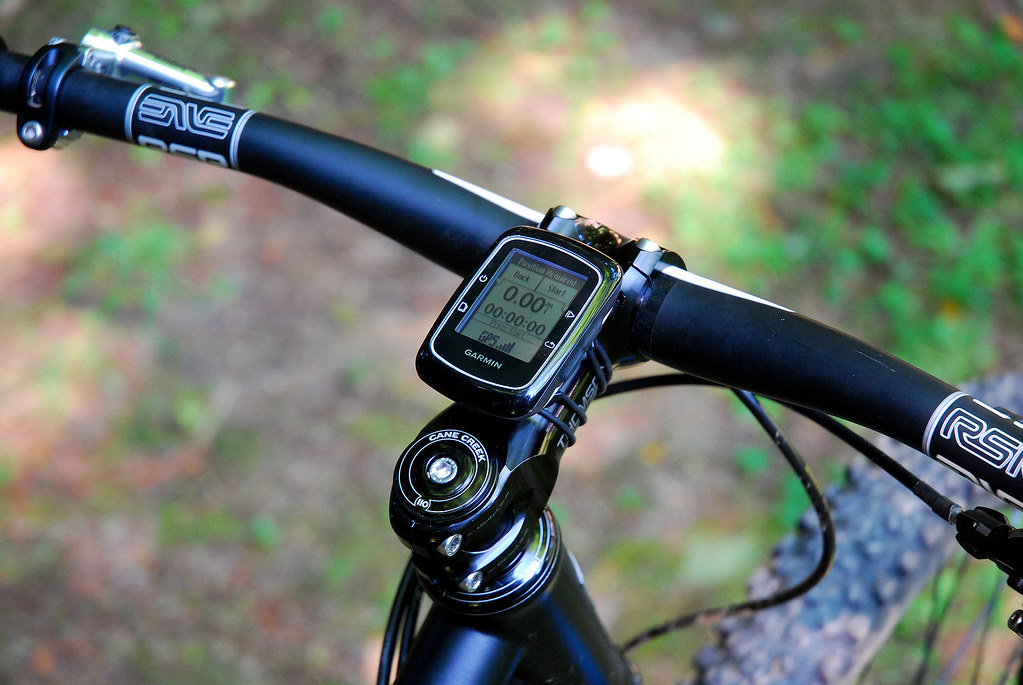 I was going to change out my normal tires for something a little more svelte, but I decided not to (I would have run either Schwalbe Racing Ralph’s or Continental’s X-Kings). I decided to go with the normal Hans Dampf/Nobby Nic and choose tried and true over fast and un-tested. Rolling resistance be damned! Not to mention, the course was reportedly a little more burly in spots this year and definitely was a mud fest. In the end, I was glad I didn’t change my tires actually – but I’d still like to give something smaller a go with lower profile nobs.

Somewhere around mile 80 of the course we caught up with a rider who had had enough. We chatted for about 10 minutes and one of the volunteers said “if you liked that hill behind you (which was a mother fucker btw), you’re going to love this one”. Holy crap was HE not kidding. There’s a series of 3 LONG hills on dirt roads. Real bitch of climbs. I can’t imagine being 80+ miles into this race, knowing that last 12 mile stretch of the course is seriously good singletrack and have those 3 bastards staring me in the face. But we made it, no one walked, Larry did all 3 out of the saddle on his SS, and I didn’t explode at the top of the hill. Somehow Franky seemed slightly unfazed by all this. The course was fun and we were having a really good time stopping at the check points, chatting and going along our way. Kind of nice to have the pressure off, but still be on the course. Not to mention we were the good guys out there telling all the volunteers “we’re it, thank you for your help, you can go home to beer”. There was another checkpoint with a bag of doritos in there somewhere.. damn those hit the spot. I topped off the bottles here actually. But along the way, I only ate and drank when I was hungry and thirsty. So far so good!

There’s a shitty climb in Francestown. I “think” it’s named Bullard Hill? I’ll check on that… But it’s just all rocks and it’s washed out. This was declared a walker. Our only one of the day. But after this it got dark. Quick. On went the lights and I was reminded just how COOL riding at night is. Literally and figuratively. Love that light bubble you dance within. This led us into the last 12 mile stretch and what’s fun about this stretch is much of the single and double track in this stretch is trails I ride during the winter on my fat bike. View from up on top: 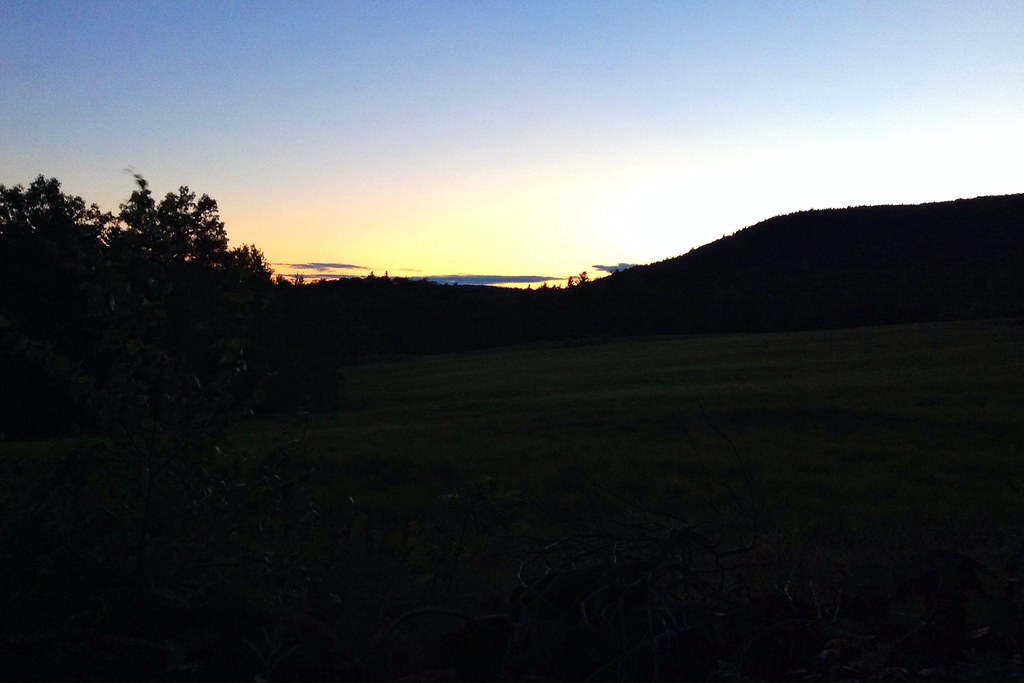 We got a call from the race director Randi right about this time too-so a nice break to chat, find out what’s what and continue on. Apparently check point 7 had packed it in but there were still a bunch of riders out and runners as well. We had only run into 1 rider so far and apparently, only about 10 minutes behind the last rider. But due to the stopping and talking with volunteers and checking in, we never caught them – which was fine I suppose. But around this point, with about 10 miles to go, and feeling good 30 miles in, I decided to have some fun and see how the legs felt. 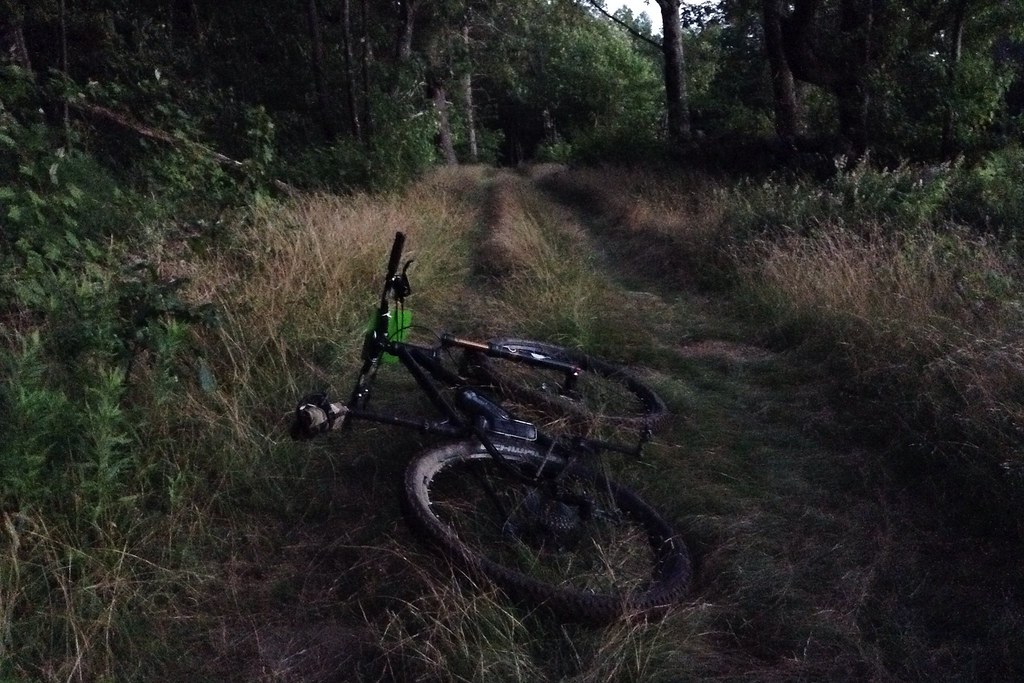 Keep in mind I AM NOT AN ENDURANCE ATHLETE. I must stress that. I just really like riding and longer rides are appealing, but I’ve been battling cramps for no reason, and I think it’s more just base miles and proper prep to warm up my body. So with caution to the wind, I opened up and started shredding. The whole previous 30 miles were pulling back and holding back. Just putting one foot in front of the other one, just kind of going along. No rush. But it’s dark. I have my light on. I can smell the tech. We’ve been through the worst of the slimy mud holes. Sweet singletrack in Greenfield awaits! Boy did it deliver on the fun factor. Knowing the trails through this section like the back of my hand really helped too. And the added layer of darkness with my Dinotte light on really had a huge stoke factor going on. The second wind was in full effect.

Pretty much everyone had gone home except for the race directors and immediate crew helping out with the race. The kitchen also was still open, so the thought of Chicken and Pasta (a heap of it I might add) really brightened the sole 35 miles in. We cruised back into Oak Park to a few slap backs and fist bumps. Totally stoked and ready for more! But all in all, I felt great, my back did not hurt, no cramping, I felt fresh in the last leg of the ride and the course was swept without incident. We had good times, had lots of laughs and Larry rode the whole thing on his Singlespeed. Really happy with the new set up as well – just enough and the eat when hungry, drink when thirsty thing worked very well. I didn’t feel bloated or, I dare say, tired? I had a hard time falling asleep later but that’s what happens when you ride from 4pm to 9pm. Head was still ON. And the kitchen gave us extra chicken and pasta… and I had my desert before I ate my dinner and then went back for seconds. 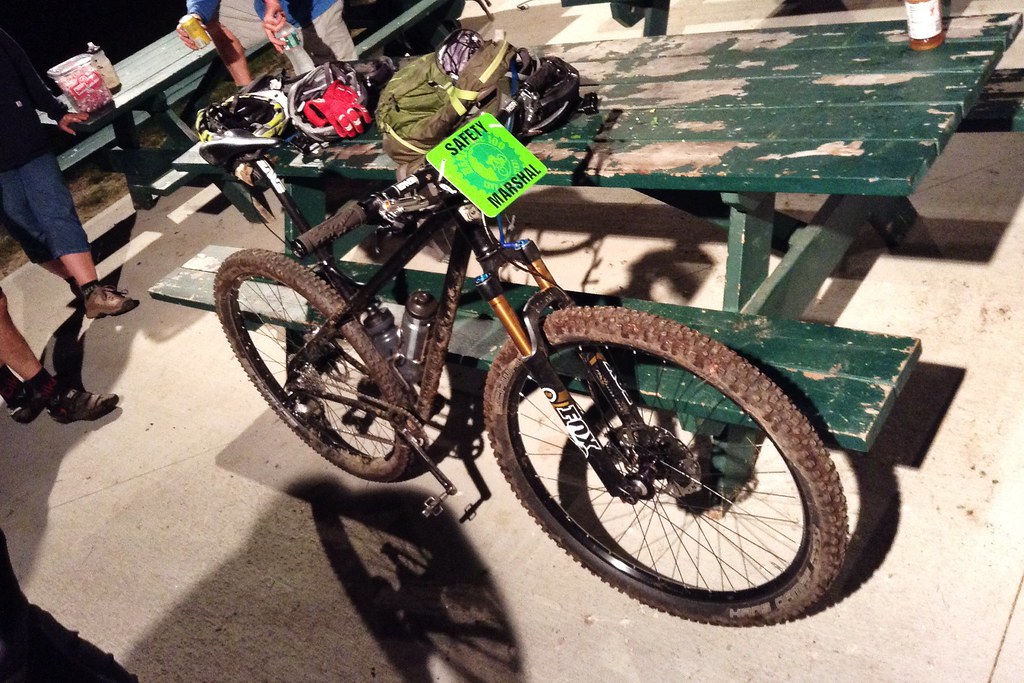 But I would like to thank everyone involved with the Hampshire 100 for continually putting on such a great, well planned and supported endurance event. It’s a tough course. But it’s a great time. Thank you all. I look forward to next year helping and I hope to help Larry sweep the 100 mile course again!