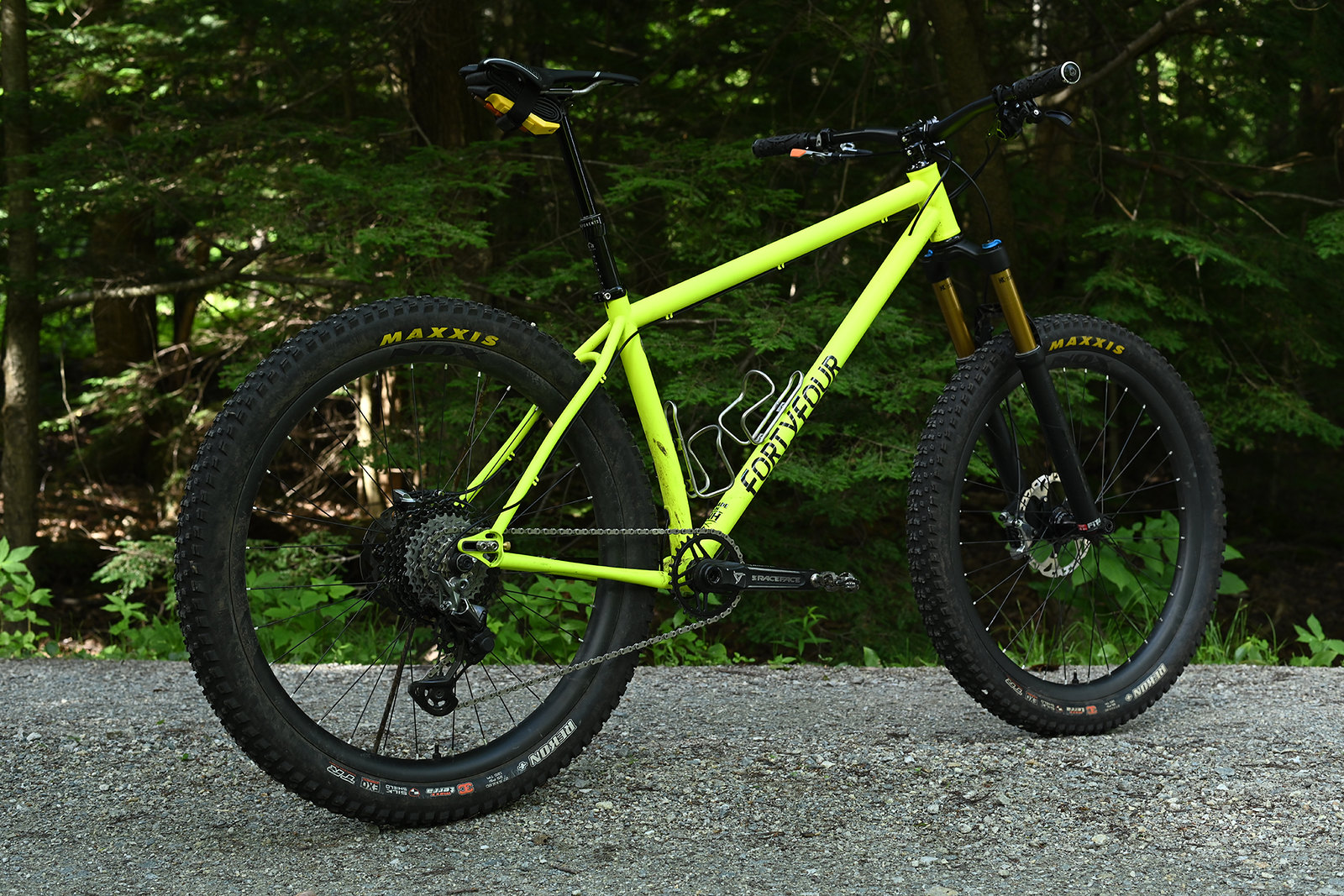 Early in the Fall of 2018, one of the founders from PNW Components reached out to me to see if I’d be interested in reviewing one of their dropper posts and their Loam Lever. Sounded like a fun project so after a few questions I settled on their Bachelor Dropper in 150mm of drop and 30.9mm compatible post. The post arrived just in time for the real cold here in NH to settle and the first snow to hit. The wait was on for snow-free trails. Fast forward to Spring 2019 and the trails were dry and that meant rolling up my sleeves on this PNW Bachelor Dropper. After a good solid 3 months of use, I’m ready to give everyone my report. So let’s dig into this review and see what makes PNW’s dropper tick. 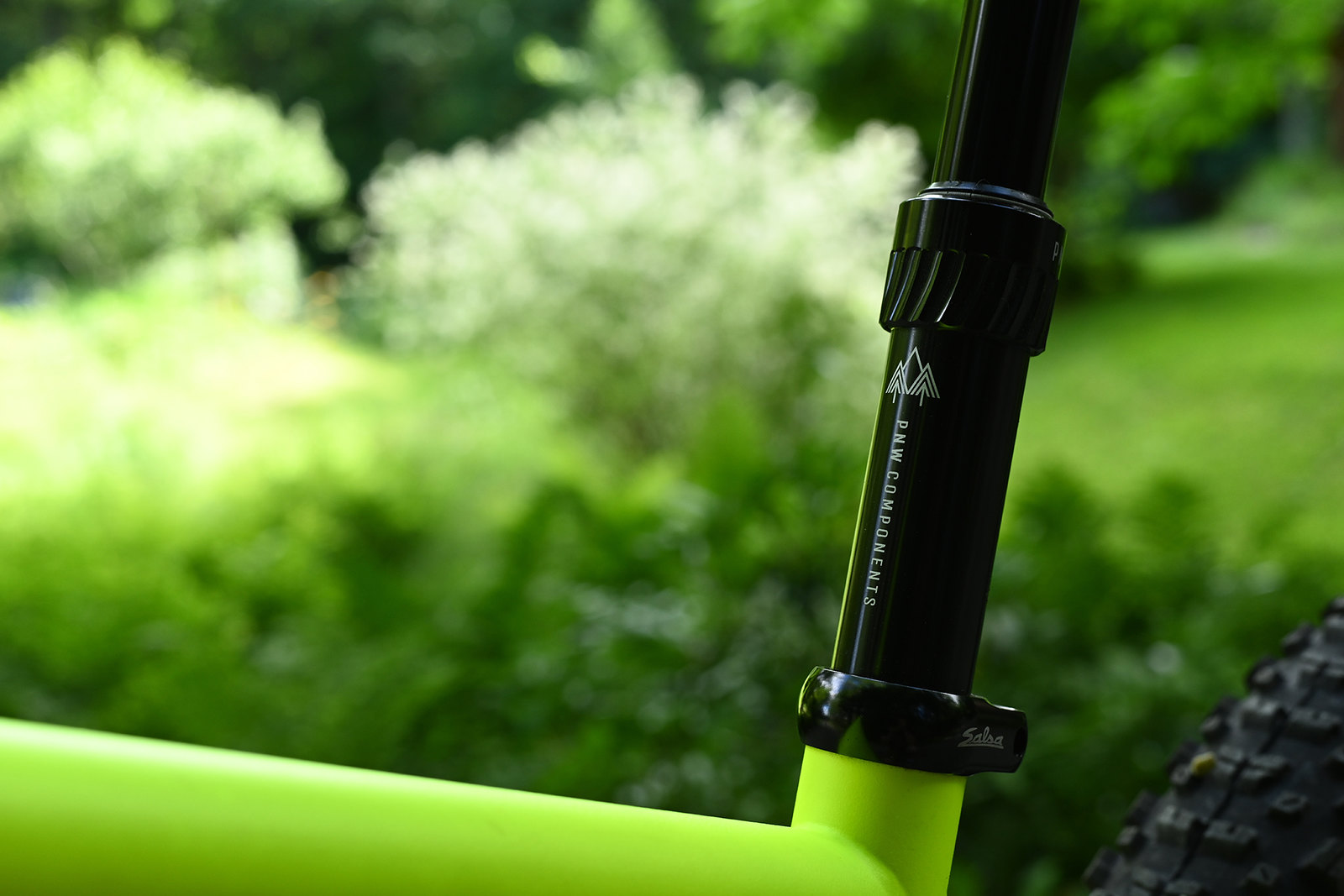 Being an Industrial Designer and having spent a fair amount of time on graphic design, I have to say right out of the gate PNW’s attention to detail and packaging is top-notch. The presentation of the Loam Lever really makes receiving it that much more special. It’s these small touches and attention to detail that really set one company aside from another. Once out of the box, assembly was pretty straight forward. The actuation is cable-driven, so I was able to swap out my existing dropper (also cable actuated) and measure and trim new lines easily. Which I will say is most likely the time-consuming part about an internal dropper: Cutting the cable housing and running the lines. I’ve done my fair share now so I have a bit of a system down. The head of the actuator is located on the bottom of the dropper and uses a small aluminum barrel that accepts the head of the cable and there’s a small set screw to lock everything in place. It also retains the locking barrel so it can’t loop out or push off when inserting it into the seat tube which can make this whole assembly of other droppers time consuming and frustrating. You get everything together only to find out the darn cable popped off the end of the actuator. Not here. Thank you PNW Components! One really nice feature of the dropper is that it has numbered laser-etched markings on the backside of the post: 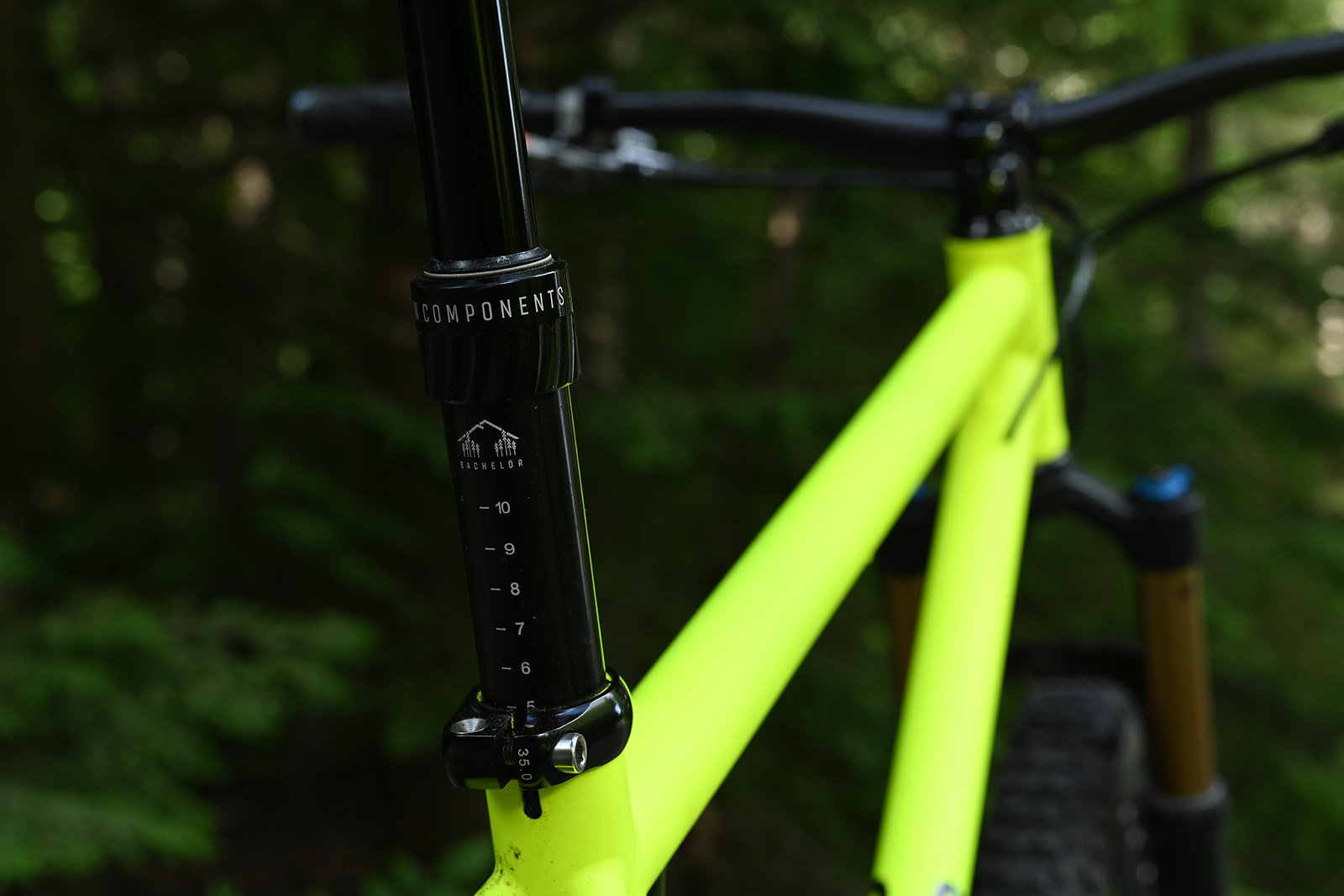 This makes setting up and adjusting or swapping from one frame to another incredibly helpful. Just look where she is and you’re golden. The head of the Bachelor used two adjustment bolts to tighten/level the saddle. My only gripe here was that the two fixing nuts weren’t pressed in or keyed into place so it took every bit of all 10 fingers to hold everything in place to snug up the bolts initially before leveling and torquing the bolts to spec. A minor gripe but that made set up a bit finicky.

Setting up the Loam Lever was equally straight forward. I was sent their stock lever option and I believe at the time, adapters were limited which made finding that sweet spot a bit trying since I’m running Shimano’s new XTR M9120 drivetrain and levers. They moved the clamp inboard by quite a bit, which if the lever was collared, would be exactly where I’d want to place the lever. So it was a bit closer to the grip than I’d ideally liked but ok for the test period: 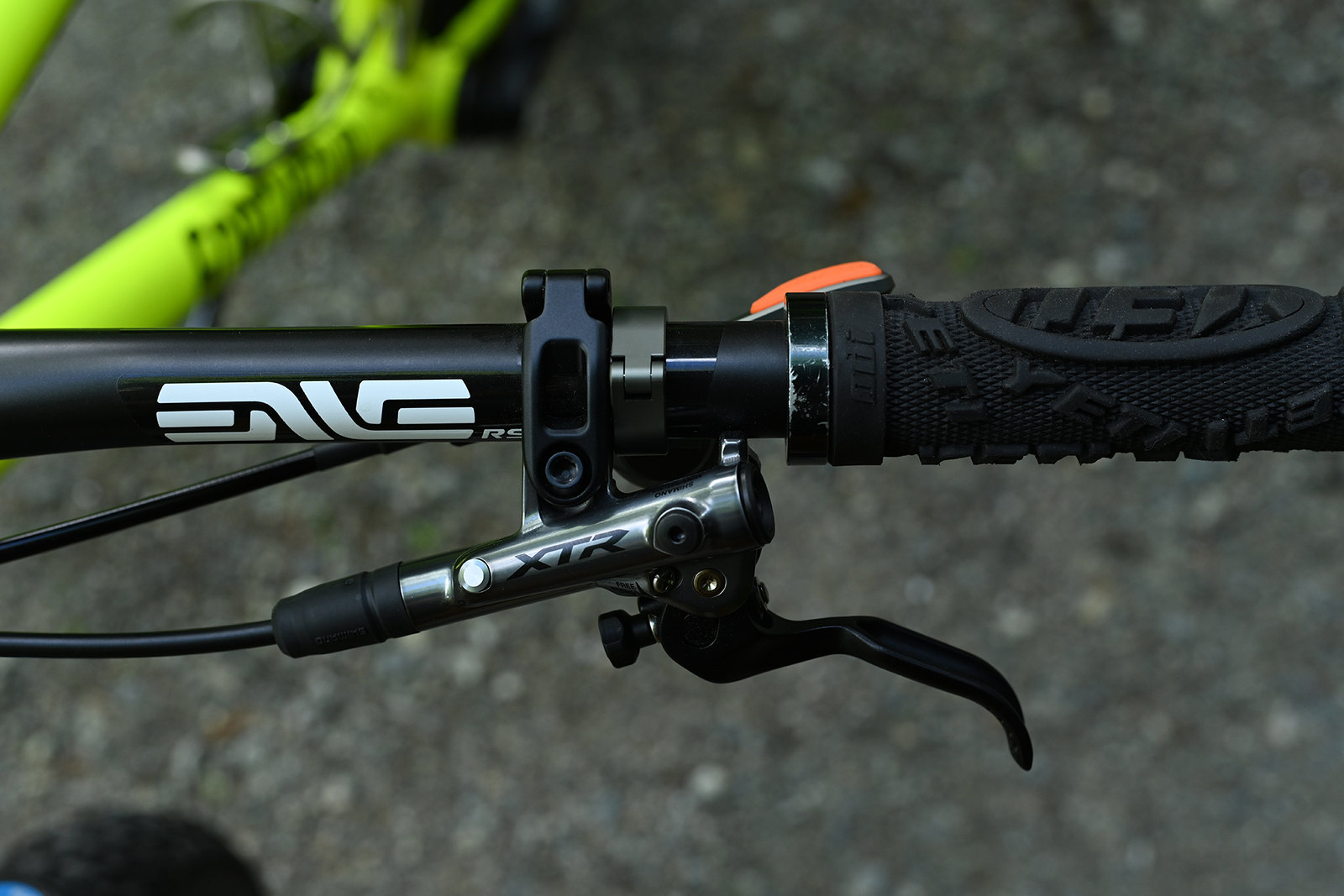 Another angle from underneath the lever: 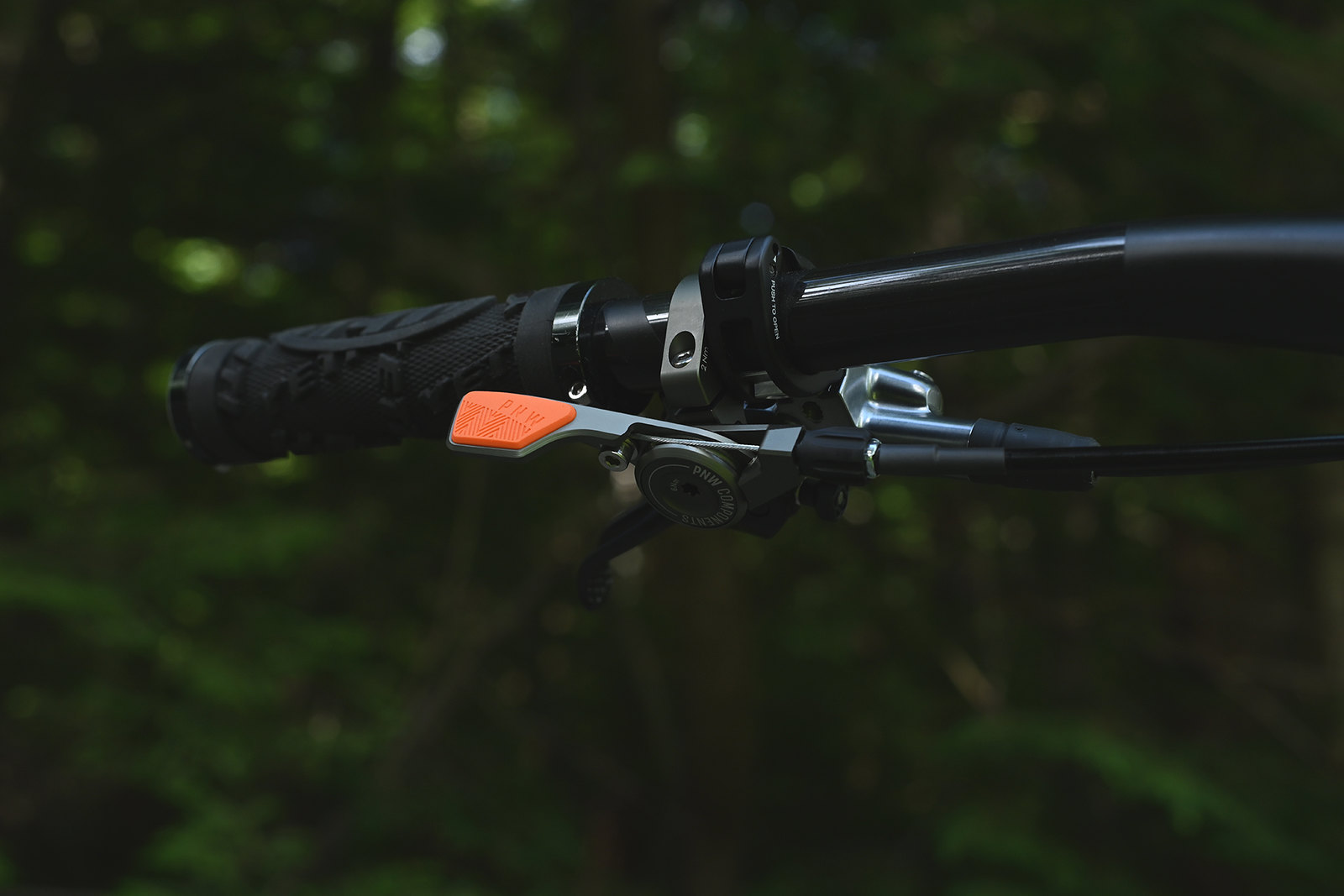 Reviewing their current line-up, you can now specify clamp-type! So that’s good for everyone reading this now and considering a PNW dropper. What makes the Loam Lever a bit different is a few features but most notable is the rubberized face of the lever: 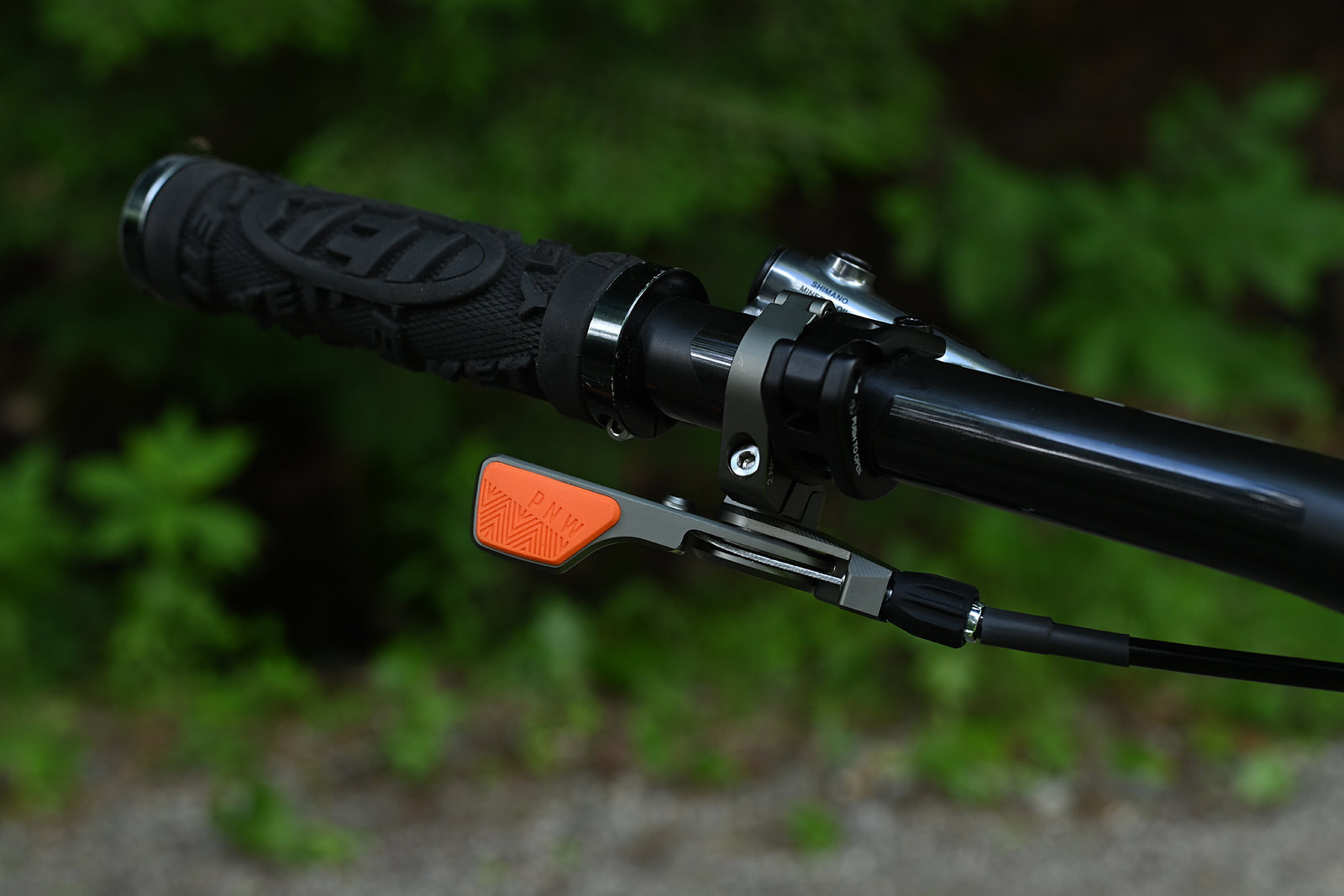 Everything rotates on a sealed bearing and has a nice compact feel along with a barrel adjuster for getting actuation “just so”. The lever arm itself is a bit longer much like Wolftooth’s Remote Light, which I really like as opposed to the ReMote version which has a shorter lever arm. So the actuation of the Loam Lever was fluid and had a nice feel throughout its swing into and out of actuation. Everything being dialed in and snappy on the return, it was time to hit the trails!

Out on the trail and throughout the test, the dropper just plain worked. Actuation was repeatable and returned to full height throughout the test period. We had a particularly wet spring initially so the Bachelor saw it’s fair share of the elements. That didn’t seem to slow it down. Clean up post-ride and the elements were kept out of all the critical areas too. Using the Loam Lever was natural and intuitive. It’s action remained smooth and steady. Halfway through, I decided to swap out the lever for a better-placed lever but one thing I noted here was that the actuation got a bit more clunky and stiff initially through the cable pull. So the Loam Lever and post were well designed to work together and in harmony with one another. One thing I’ve had happen with droppers is they start to slip after a few weeks of use (not everyone, but some do). At issue is getting enough torque on the clamps to keep the post in place without binding up the moving parts inside the post. So my Salsa Lip Lock saw about 7 Nm of torque and all still worked as it should and the post stayed in place. Engin Cycles developed one heck of a collar if anyone is in need of a super lightweight, well-made seat post collar specifically meant to have maximum clamping force at low torque – my own Fox Transfer start to slip with a Salsa Lip Lock at 8Nm… swapped out the collar for Engin’s and used only 2.5Nm of Torque and the post will not slip now. I had a spare Engin collar at the ready just in case this happened, but all seemed AOK throughout the testing period. All in all, Droppers from the outside are pretty simple and straight forward. They need to go down and return to full height repeatedly no matter what the conditions and hopefully, how often they are in use. And I tend to use mine pretty much all of the time. I’d say well over 85% of my ride, the dropper is slammed and I’m out of the saddle riding, pedaling, carving and leaning into the turns. After running a 150mm dropper on all my mountain bikes for a handful of years, it seems now a bunch of companies have been offering 175 and 200mm posts. I originally was running a 125, then moved to the 150 and was surprised by just how useful an extra 25mm of drop turned out to be. And now having run a 150 for two seasons, I’m genuinely curious what a 175mm dropper would feel like. That may just be the sweet spot for drop and climbing stiffness when you need to return the post to full height and climb. However, I am completely happy with my current 150mm of drop! Having run the PNW Bachelor 150 and all of my other bikes sporting 150mm, I’d never recommend returning to a 125 or 100 unless the frame/rider is on the shorter side and their frame just can’t take a 150. But if you can, there’s no reason not to run a 150mm dropper. That extra 25mm of drop gets you that much lower and lets you carve that much harder into and through turns. And that’s something I noticed most. Yes, it gets the saddle out of the way when you’re headed downhill, gives you a ton of confidence for tackling steep terrain and saves your lower back from a pounding but I’d argue a droppers other best attribute is just how low you can get through turns and how hard you can no lean/carve your bike. What this means is instead of slowing down into and through turns, I’m actually able to confidently carry a lot MORE speed through turns. Put that attribute together with going downhill, and you’re on the gas and off the brakes! And faster is better than slower…

In conclusion, I’d like to give my two thumbs up to PNW Components Bachelor 150mm dropper. For those interested, the Bachelor is available in a 30.9, 31.6 and 34.9mm option and the both the 30.9 and 31.6 are available in 150, 170 and 200mm options while the 31.6 only comes in 150 and 170mm drop options. The Loam Lever is available in several color combo’s and clamp adapter specs too! It recently looks to be available in a LTD Edition a stealth black and high-vis pink option. So if you’re in the market for a new dropper or considering giving a dropper a try, take a closer look at PNW Components! I was not disappointed and I hope you won’t be as well. Thanks to Aaron at PNW for putting his trust in me for a review and thank you all at PNW Components.