With the summer comes varied weather. It’s been relatively dry so far this summer however we have been getting good amounts of rain when it does decide to precipitate. New Hampshire has a nice mix of hard pack. It also sports quite a bit of trail on the loamy side due to all the Hemlocks and assortment of Pine’s. There is no lack of rocks, roots and obstacles… man made in the shape of a never ending network of rock walls in addition to what Mother Nature provides. To say we have a variety of mixed terrain I’d suppose is accurate. It is on the technical side and consistently so. I find myself riding in other regions of the U.S. every so often and am surprised by the lack of obstacles and the buffness of the trails. More observation than complaint. But when I’m home, the trails I call home feel just like that: Home. With the new set up with a WTB Trail Boss front and rear combination, I also inquired about another one of their tires: The WTB Vigilante 2.3″ TCS Light. This is a more aggressive tire with a fairly open tread pattern, meaty knobs, subtle siping to allow more surface area for traction. The open tread pattern providing some more bite and mud shedding capabilities. I wanted to try this in combination with the faster rolling and tighter tread pattern of the Trail Boss in a 2.25″ profile. Will sent along one of these tires for me to try out. Here’s some initial thoughts.

Side walls offer a ribbed “cross-hatch” pattern to provide a little more abrasion resistance (my observation) which is good for the Granite State. These tires are meaty without being too heavy – weight reported is 900g. As stated, the knobs offer a more open pattern for an aggressive profile for grip and mud shedding. Yesterday’s ride was a tad on the wet side from some recent heavy rain, and the Vigilante’s bit deep without clogging up. I also noted that the rear Trail Boss stayed really well cleaned through out the ride too. Slammed into turns the tire held it’s own and was predictable. The ride I chose for the first ride was on the technical side with lots of rocks and roots with a 13 rock wall crossings, 13 bridges, no shortage of roots and rocks and plenty of climbing, descending and of course non-stop shredding. Mentally counting the bridges and rock walls of the route (man-made), I am realizing that there are indeed that many obstacles and more I am not accounting for naturally occurring as this “test loop” is on the shorter side. Up and over’s the tire held it’s own. Rocks/roots it gripped in the semi wet conditions well being again predictable and not sliding in off-balance moves. Although one rock wall crossing has always been one that I never expect consistency on the other side. Someone who frequents that trail has decided that one of the rocks in the transition shouldn’t be there (the backside of the wall has a nice transition except if you want to roll an alternative line which takes you up and over one side to immediately traverse another rock. That line has a good dip that was smoothed out by one well placed stone… which is the one someone keeps removing. And I keep putting back into place. Without it, I’d say 50% of the time you stick the landing. REALLY stick the landing as in the front wheel STICKS. You don’t know it’s there or not until you commit to that line. Well I committed and went OTB. No rock to replace in sight. So they must have tossed it deep into the woods. Stinkers. I’ll have to find another and make it a permanent addition… The line is challenging enough with that small rock in place. Oh well. Back to the tires. With the exception of that one bobble, all the lines were cleaned without dabs so for a first time on a tire, that’s stoke worthy. Confidence in the tires ability were immediate I will say. Some times you hesitate a bit too much with new setups, and I will say I’ve been able to trust WTB’s offerings right from the get go so that is encouraging. Set up wise the tire mounted up nicely (a touch tight) but that is to be expected with tubeless. Sealant was added using a Stan’s injector with the valve core removed. They aired up with a floor pump and over inflated with a good shake and bounce left to sit overnight they held pressure and did not need any nursing. Pressure was set around 15psi but I let a touch out over the ride and settled in around the 13-14psi range. Rear was run around 14-15psi (Trail Boss FYI). The tire mounted up a full 2.3″ and appears to be stretching a bit as it’s been ridden. Pattern has remained consistent (One tire I note that kind of opens up with age is Schwalbe’s Nobby Nic – the dead spots become bigger). The tire rolls well but clearly not as fast as I was observing with the Trail Boss’s up front. I’m thinking what I will eventually do is settle on two set ups for both my mountain bikes: 1×11 will see the Trail Boss 2.4/2.25 combination while the SS will see a Vigilante 2.3 up front with a Trail Boss 2.25 out back. So one setup will be a bit more aggressive than the other. 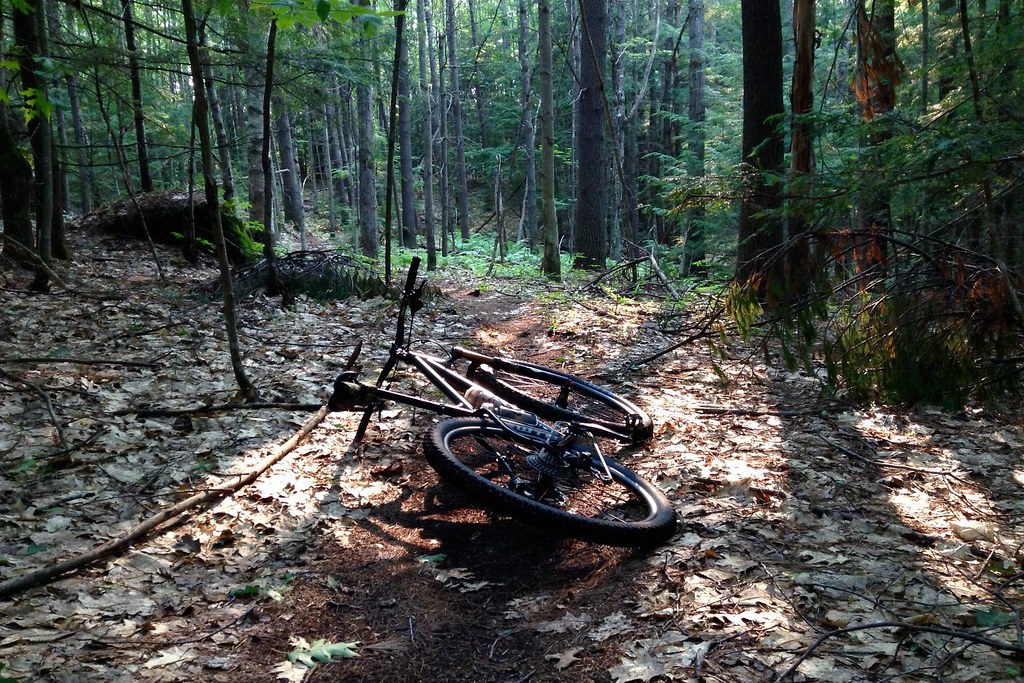 Overall I’ve been very impressed with WTB’s tires, the compounds used, their weights and what the tires offer in terms of traction and rolling resistance with my home trails here in NH. So far so good and it’s really good to be back on WTB tires. If you’re looking for a slightly more aggressive tire with a meaty knob pattern that is a touch more open, I’d say to give the WTB Vigilante’s a run for their money. Check them out. I’ll report back on both these tires and the Trail Boss’s later in the fall as I’ll have a lot of trail time on them by then. But initial rides and thoughts are as such: I’m impressed.