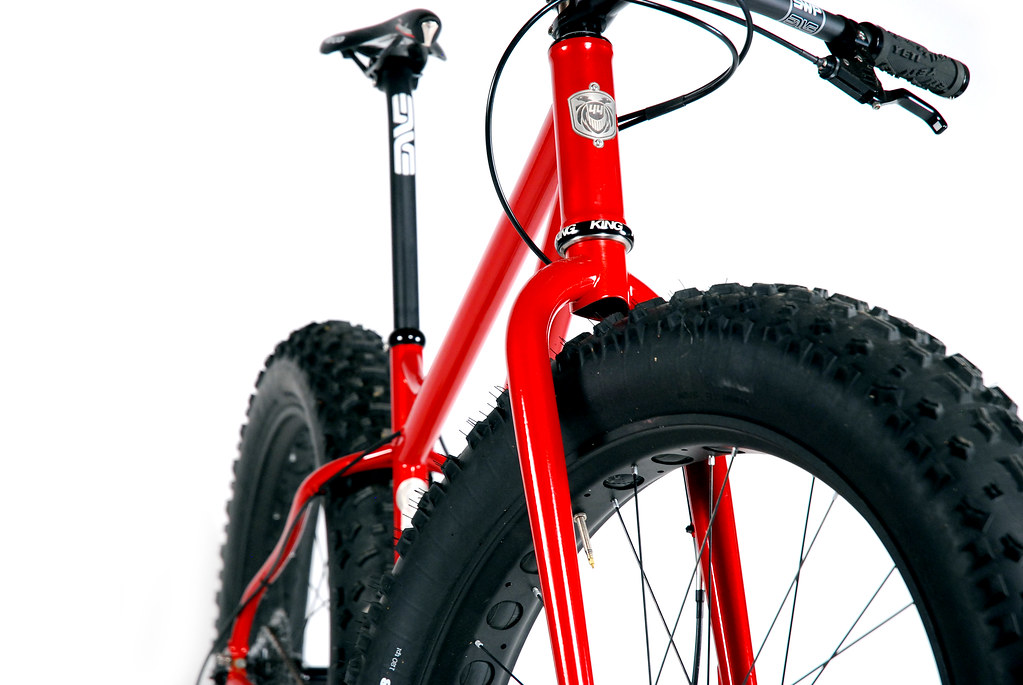 This will be the last installment of my “Why I build What I Build” series. This one is on my personal fat bike. To understand where I am today, and where I am headed actually with the next iteration of this monster, we need to discuss where it is I came from. I grew up in Pennsylvania, just north of Philadelphia in a small town named East Greenville. My home was a half a double located on good ol’Jefferson Street, exactly 1/2 mile from my front steps to the front steps of my middle school (Upper Perkiomen). The town is composed of the roman block system. Alleys, streets, a main street and of course lot’s of short cuts. These short cuts were the spots where, for what ever reason, as kids my best buddy and I decided we’d cut down on time to and from some destination. Not really a short cut at all. More like here’s a spot where we can get off the sidewalk, and tear shit up for a grand total of 5 seconds.. maybe 10 seconds. But it was mayhem on a bicycle basically. These short cuts also of course meant curb hopping. Jumping anything and everything. It’s that notion of the “short cut” that reminds me why the heck I love riding bikes so much. It’s about bending and breaking rules. It’s about laying into turns and pedaling hard. “See that? Let’s see if I can clear it…” There’s spirit in all of that. A little on the reckless side, but just bordering “under control”. Maybe not – best to push hard and think about the consequences later. So these short cuts I speak of, well those translated into longer rides out of town. Getting off the beaten path, getting off that proverbial sidewalk perhaps. Again, no rules. Just make it up as you go in the pursuit of fun and adventure. Summer would pass. Fall would lead to winter and snow would put the bikes in hibernation until the following spring. Before long we were out bending and breaking rules again on a daily basis. Bikes were the conduit for that.

Fast forward to when I first threw a leg over a mountain bike and that spirit of the short cut bit hard yet again. Again it was about making it up as you go. Throw some caution to the wind, push hard through turns and spot something off down the trail thinking “I can clear that…” And so it went. Season after season. Bike after bike. Year after year. Always having to store things away once the snow fell. I’d be crawling out my skin by February wishing and hoping for the snow to melt. Then along came this sucker dubbed a fat bike. Right around this same time I was starting to build my own bicycles. Fat bikes just oozed that short cut feel. No rules. All seasons. Bikes and buds that end with cold suds. This opened up a chance to actually ride all year round, straight through the winter and into the spring until the snow melted.

I had to make one. I couldn’t NOT make one. Fat Bikes really break all the rules. There’s nothing conventional about them. Just like spotting that short cut, Fat Bikes beg you to “See that? Let’s see if I can clear it…” Below is that first iteration. 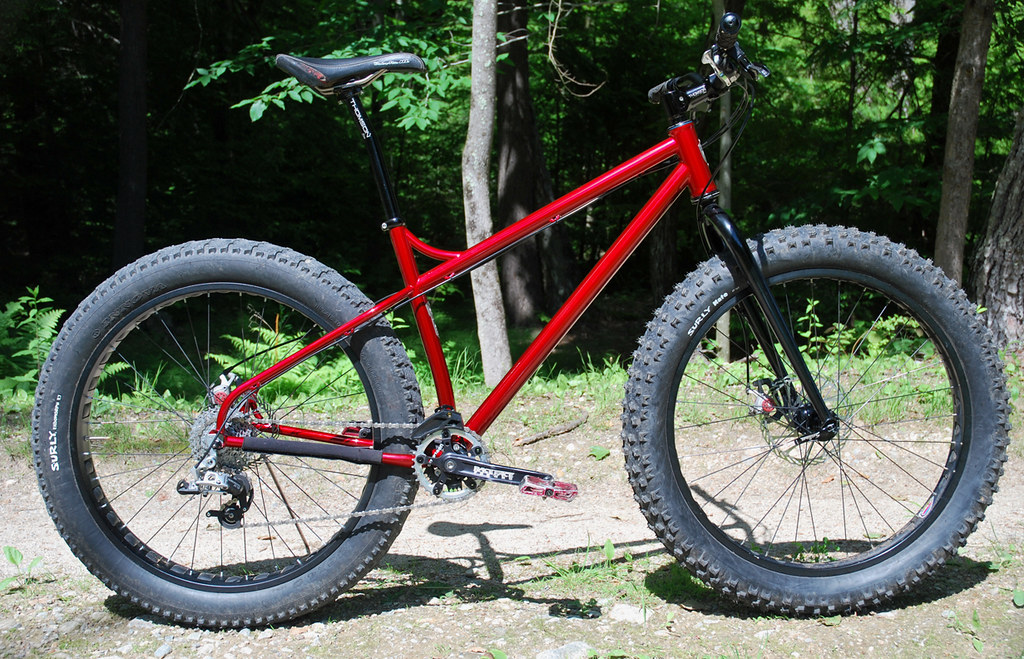 And then a crank swap after riding it up hill… 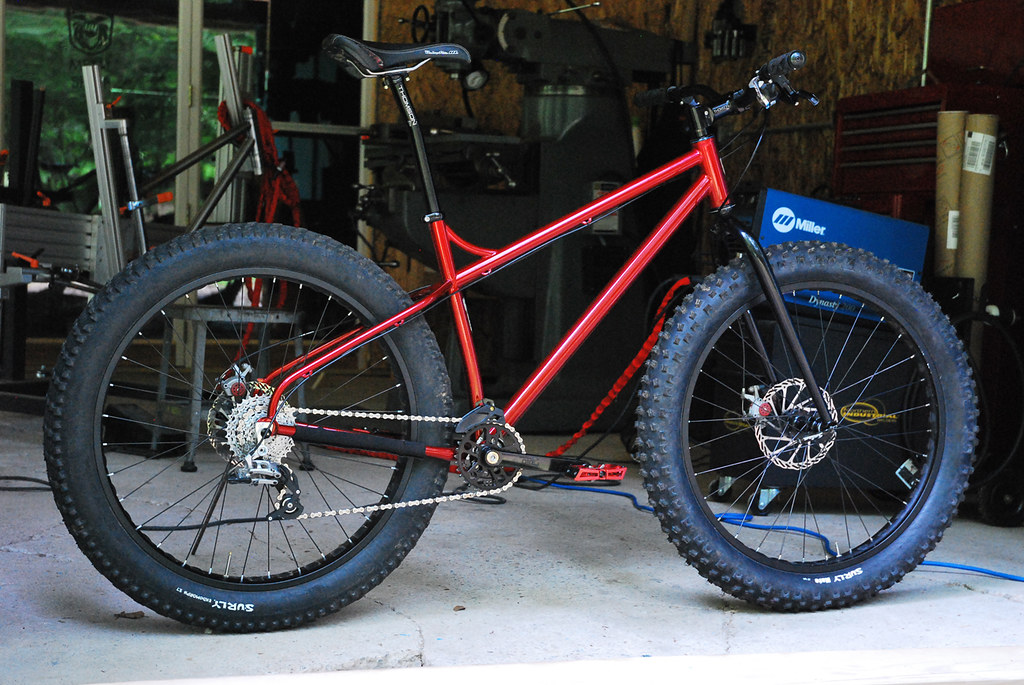 Not knowing where to start, I built it like a mountain bike. I wanted to see how that geometry worked on trail with big tires and then, on those same trails covered with snow. Why not? This one sported 70.5 Degree head tube angle, 2″ of bottom bracket drop, and 17.125″ chain stays (I had no idea where to start and did not know how far i could push these with that big of a tire). 3.5″ tires on about 70mm rims (more like 50mm rims). It was a great learning experience and just pure fun. As the season progressed and I was riding it in all conditions, I realized I needed to make some changes in the overall setup. Most important right out of the gates on that first ride in snow was the drivetrain setup and the tires. I was on a nate up front and an ENDOMORPH (Holy cow that tire was terrible). I swapped over to a pair of 45North Husker Du’s (just like the band!) and realized although they were much lighter, the tread just was not heavy enough. I just spun in place when the snow was piled high and deep. So below you can see the tweaks I made: No more clip less, flats only. Expanded from a 1×9 (terribly under gunned) to a 1×10 sporting a 36t in the back, but still the front being 32t, I felt as though a 30 or 28t up front would be better to utilize more of the cassette. Carbon White Bro’s Snowpack fork. TREAD was Nate out back and a BUD up front – that is serious meat. I also went wider to a pair of 70mm Rolling Darryl’s on set of Paul Component Rhub/Whub hubs (135mm / 170mm spaced). Honestly, all this set up tweaking changed a lot of things and I started to see that light at the end of the tunnel. Geo wise, things were a off. The bottom bracket was just too high, the head tube was just not slack enough, but how high was it and how slack did it need to be? I did not know, but this is why you experiment and march to the drum beat of: Build, RIDE, Repeat.

Another view to compare with what I’ll show you next… You can SEE, really SEE just how big of a mother that front tire is. It’s huge. So big you have to twist the wheel to get it past the disk caliper. Excuse my french: BUT FUCKING-A I LOVE THIS SHIT. So with all this and a season under my belt, I built this sucker up: So you’ll note that this still sports a guide. Right around this time, Wolf Tooth still did not exist and XX1 was just hitting the scene. But Wolf Tooth Components came to be and soon supplied me with one of their first production ready Drop Stop chainrings: 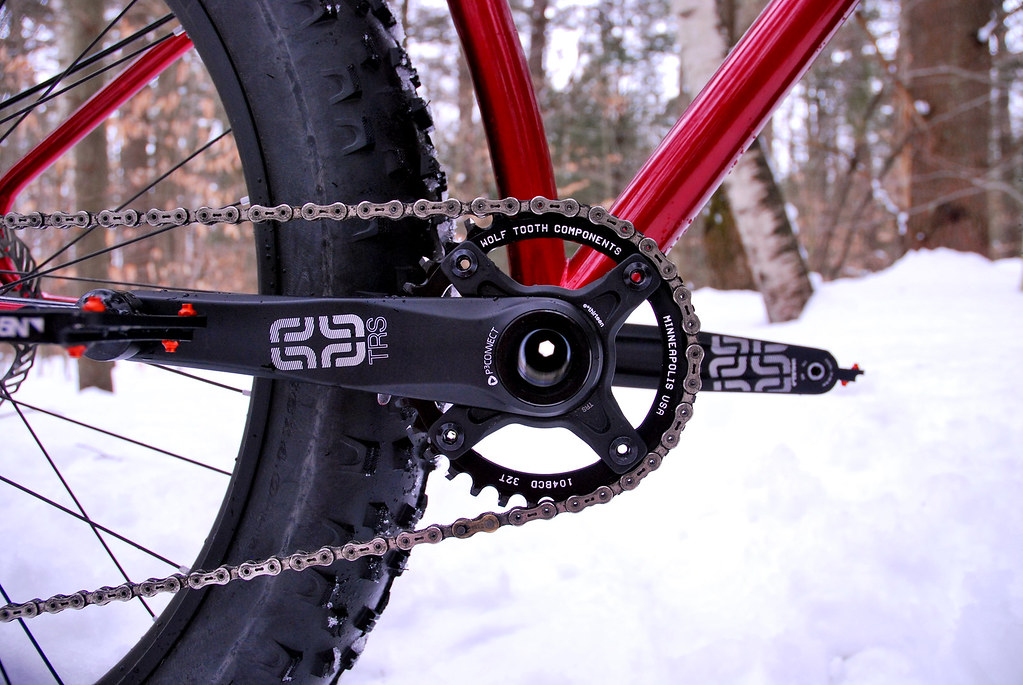 And a finalized build: 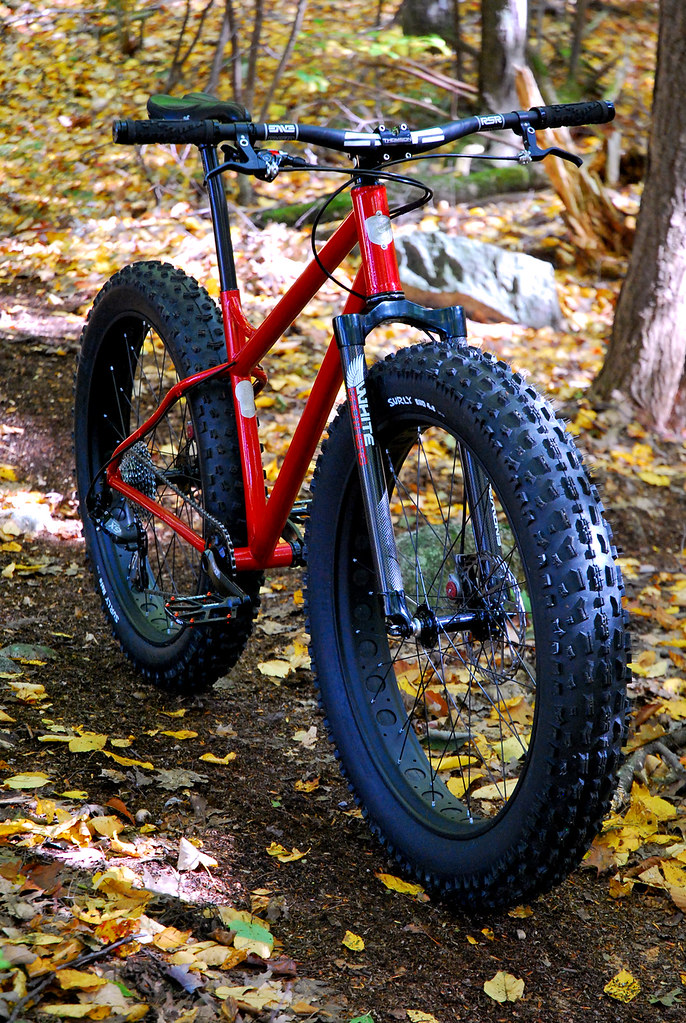 Again, yet ANOTHER game changer here. Really simplifies so much about the front end of the drivetrain and you know what? IT WORKS. But the big thing to change was a shorter chain stay length (16.5″ w/ a 3.8″ Nate mounted to a 70mm rim), slackened head tube angle, a little more length in the cockpit and a lower bottom bracket height taking the tires “sag” into account. Right around this time, of course also rolls out 29+. Well that meant this: The convertible concept of running Fat one season, and 29+ during another… You’ll also note that I’ve made yet another crank swap and set up tweak. The elimination of the spider allows you to run a smaller than 32t chainring in a 30t chainring or even smaller like a 28t (pictured). Which coming from previous seasons, it seemed like this was really a restriction in a 1x setup for what was available on the market. I really needed access to a smaller tooth count chainring without having to resort to a crank which basically was a triple that you used the granny – which is a bit of a hack. Not to mention it throws the chain too close to the tire in some cases, which is yet another point of contention. So with this notion of “one bike to rule them all / IF I could only keep one”, I decided to build yet another pro to based around the 5″ fat platform and the whole wheel sharing idea (29+ and 5″ fat). The first ride out on the above, I immediately noticed the change in the higher bottom bracket height due to the different tire/wheel sizes. However, a 29+ wheel is a 30″ diameter and a 5″ fat tire is basically a 30″ diameter wheel. So building for 5″ would really make these two work together in harmony, in addition to float: 5″ is worlds apart in terms of float to 4″ of float. So on to the next iteration mid stream through the season but i built this one with sliders so I could really get a good handle on chain stay length, change in wheelbase AND tire size/wheel size when these things changed: To bring you full circle, through the course of 3 prototypes and basically 3 seasons here is what I learned in a nutshell: When it comes to snow, fat bikes benefit from a lower rider center of gravity and thus a lower bottom bracket height. Head angle needs to be slack so that bubble of air is out in front of you promoting the tires to crawl up, over and then on top of the snow, wide bars help with an added layer of snow, gearing needs to be low (more teeth!) so you are pedaling, making adjustments as you go, mostly seated riding as too much power and you spin the tires. Tires need to be big, fat and heavy knobs. The deeper the bite the better. Wide rims spread the tires sidewall more vertically and open up the tire profile to add more stability. 5″ tires are a must with any sort of base. Flat pedals all the way.

This all leads us to PART 2…