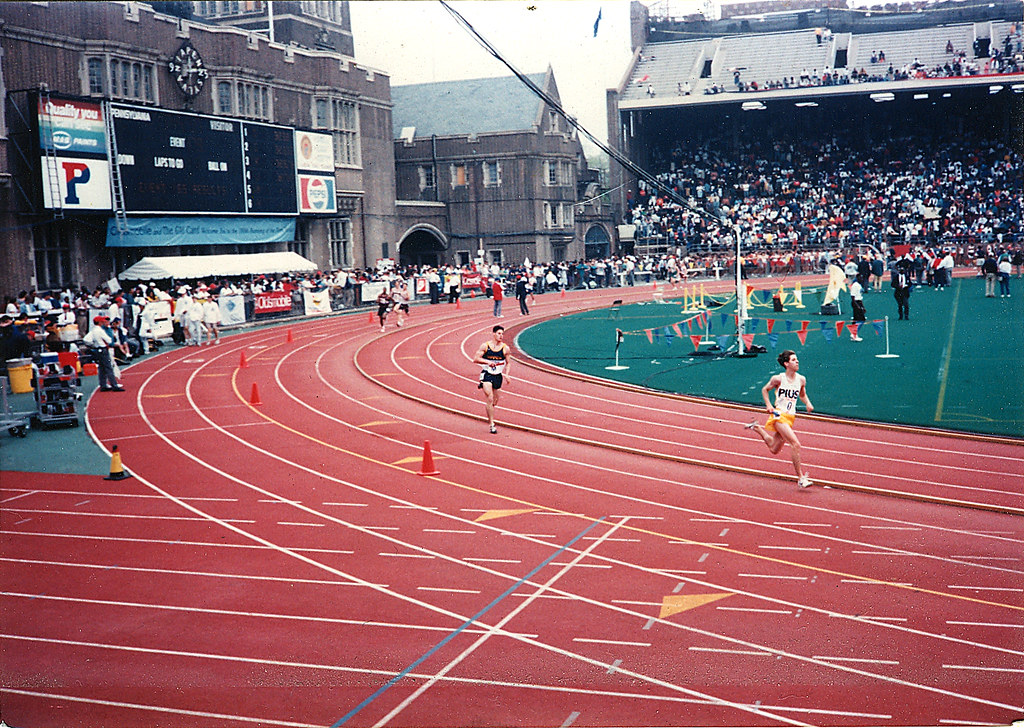 Every spring, without fail, that crisp air and clear blue skies and the smell of fresh cut grass instantly transport’s me back in time to afternoons spent on the Upper Perkiomen High School’s track.  For a passing moment, I’m struck by how my senses are alerted and my mind is filled with memories from days past out on that old cinder track.  Back then, this was a time for me to stay fit and gain speed for when Fall arrived and Football season was in full swing.  When I was a young tike, and I was at my grandparents house in Red Hill, PA, there were often tall tales of sports at the dinner table as my Grandfather recalled his days at the then East Greenville High School (which merged with Pennsburg HS to form Upper Perkiomen if I have my history correct…).  But I became aware that my father ran track and played football for Upper Perk.  So of course, that’s just what I wanted to do when I came of age.  So from 7th grade on up to 12th grade, I ran track in the Spring and played football just like my Dad.  But each spring from, I believe 10-12th grade, I had a chance to go to the Penn Relays.  The largest and longest running relay race on the planet!

Somewhere along the way, I want to say it may be in 5th grade, we had some sort of “field day” with lots of events at our middle school.  And I think the last event was team’s competing in the 4×400 relay race for bragging rights.  Each year we had to do some sort of presidential fitness test too and one of those parts of the test was we needed to run a mile.  I recall discovering I hated running long distances.  But the lure of only one lap as fast as you can go?  Hmm… that seemed to marry all that made running fun for me:  Sprinting!  Everyone loves to put the pedal down with the nails and sprinting allows you to go all out.  Strategy!  There are 4 turns.  And boy can a lot happen in only 4 turns. There’s that pesky backstretch and depending on the track, does it have a tailwind or a headwind? Lane positions!  Luck of the draw with the inside lane or are you way out in left field on the outside lane not knowing what’s going on until heading into the 2nd turn?  Sometimes the referee running the race will tell you that you must stay in your lanes or you take the inside lane at some point.  Last but not least is your start.  And so much can be determined in that first handful of strides.  Over time I discovered although I was fast, it took me a little bit to get going because of my long stride.  Middle distance seemed to suit me well.  So the 200m and 400m races were great.  I was often thrown into the 4×200, 4×400 and occasionally I ran the 4×800.  But I really came to see my event specialty as the 400m.  That was the one race I really trained for and seemed to mirror what kind of running was going on in a football game well.  Sprinting at full boar on the brink of being out of control over a distance but needing the awareness of your surroundings to read what the other runners were doing in order to time all your attacks.  And there was something pleasing about running once around the track as fast as you could!

As I said above, I believe my first trip was as a Sophomore (9th grade practiced separately from varsity) and I was on the 4×400 team.  It was a mix of excitement and anxiety all balled into a giant knot.  The 4 of us arrived with a second just in case one of us were injured warming up and practicing before our event.  Our 4th leg was this speed demon, RJ Fitch.  This kid could sprint and was fast.  At the time, I believe I was the 3rd leg handing off to him.  There was a lot of sitting around before our event so we got spots in the stadium and watched the day’s events unfold nervously anticipating our impending event. Over lunch, RJ was eating a yogurt.  I asked him why he was eating yogurt before he had to run.  His answer?  “Yogurt makes you faster, Kris.”  (To this day I still eat yogurt because it makes you faster.)  As the time neared, Coach McBain gave RJ the running orders to take us out and warm us up so we did a nice little warm-up around downtown Philadelphia to knock out the cobwebs and warm ourselves up.  Then it was time to stretch, do a bit more warming up, dress in our uniforms, pin our numbers on and take the field for our event. I’d never been on a field that size before, let alone an artificial track of that quality.  It was a bit surreal and made your head spin at the crowd size.  But with the flurry of activity and getting yourself in the right spot that all started to melt away.  And then the first runners were off!  I still can remember the thunder of the crowd.  That day I also watched a world record set for the 4×400.  I don’t think I’ve ever seen a human run that fast, let alone 4 of them.  They looked like they were flying.

Fast forward to 1994 and now I’m running the last leg of the 4×400 at the 1994 Penn Relays.  It’s still a dizzying event and walking into that large stadium still makes your head spin.  But again, just like each year and every event I competed in, once it’s your turn, all that just kind of melts away, training kicks in and your mind is focused on the task at hand.  That loud crowd just kind of gets muffled.  We were ok.  We had some speed on our team but there were other teams (Phoenixville, Great Valley, and Pottstown) who were by far much faster.  But Coach McBain said if we ran our best, we just may be able to pull something out of our hats.  And just like that, he gave the word and it was my turn to lead the team out for a warm-up and go through all the stretches to prep for our race.  One little detail here that needs mentioning was my shoes.  Being that RJ and I ran a bunch of the relays together and competed in the 200 and 400m races together, we formed a bit of a bond.  Seeing that I was going to fill his proverbial shoes, he literally gave me his shoes: An old set of Nike sprinters flats with silver swooshes and they were ALL BLACK.  He had been looking for something special and wasn’t all that pleased with the 90’s pop colors Nike was putting out.  He wanted something that looked fast.

The story went like this: One afternoon, he went to the good ol’Valley Shoe store on Main Street, in Pennsburg, PA.  He told the owner he was looking for a pair of shoes but not just any shoe.  Now something about Valley Shoe: That place was  PACKED with shoes to the ceiling and there was a basement with more shoes.  The owner would go down there and come back up with magic.  So the owner studied RJ for a minute and said he might have something that fit the bill.  So he disappeared into the basement and after a handful of minutes came back up with an older NIKE box.  A bit worn, and bit musty.  But clearly NOS (That’s “New Old Stock” for the uninformed).  RJ opened up the box and sure enough, there they were: All black NIKE track spikes with silver swooshes.  And they fit.  So RJ gave these shoes to me and said to run like hell.  And those shoes fit me too.  What was cool was at the time, everyone was wearing white shoes.  But for me?  I had black shoes.  There’s something faster about black shoes.  Something a bit more serious.  Those shoes meant business. So back out onto the track, we all went.  We had to stand in a holding area while the rules were explained and we were told what time we were to race.  And just like that, it was the Pac-10’s turn.  We all lined up and the first runners were off.  The fun part about the 4×400 is depending on when your lap was, you got to cheer on the other runners and get mentally ready for when it was your turn.  We were doing ok on the first lap and kept pace with the pack.  Phoenixville were the favorites and boy were they fast.  Our second runner out was the same.  Kept pace but we were slowly getting caught up in the pack.  Being 4th, that’s when your heart starts to pound and you start to think about how much ground you’re going to be trying to make up.  3rd leg out and a gap started to open up.  I think we went from 3rd into 4th?  At this point, if my memory serves me well, Phoenixville was destroying the field.  That group of 4 were exceptional.  But as the 3rd leg crested the 3rd turn and was heading into the 4th I was on the track ready to lead him out and runners were passing me on their way for the 4th and final leg.  All you can think of is: Give me the baton!  I led the runner out and the exchange was clean and that’s when the crowd just goes silent and you’re concentrating on your breathing and putting the pedal down.  Way out in front of me I think was 4th place.  Or maybe it was 5th?  Probably 5th place.  But coming out of out that first turn I felt I could catch him.  Into the 2nd turn and I knew I could catch him and sure enough, by the 3rd turn, I was passing him.  Still, way behind the leaders but that’s what you do when your turn comes: Run like hell.  Run as fast as you can.  Results be damned!  It’s about having the privilege to participate and compete at an event as prestigious as the Penn Relays.  I think my fastest time around the track was 51 seconds and it was unfortunately in the rain.  I had to break stride because my right shoe was falling off!  I always wanted to bust that 50-second mark.  But 51 seconds would have to do.

Track and Field has a special spot in my memories because it was a time of the year when close friends formed up and trained as one.  Pushing each other’s limits and in turn, pushing their own to see just how fast we could go.  And every Spring, that’s just what pops into my mind when I start smelling fresh cut grass ironically.  Days out on that cinder track at Upper Perkiomen and that joy that is the Penn Relays I was lucky enough to participate.