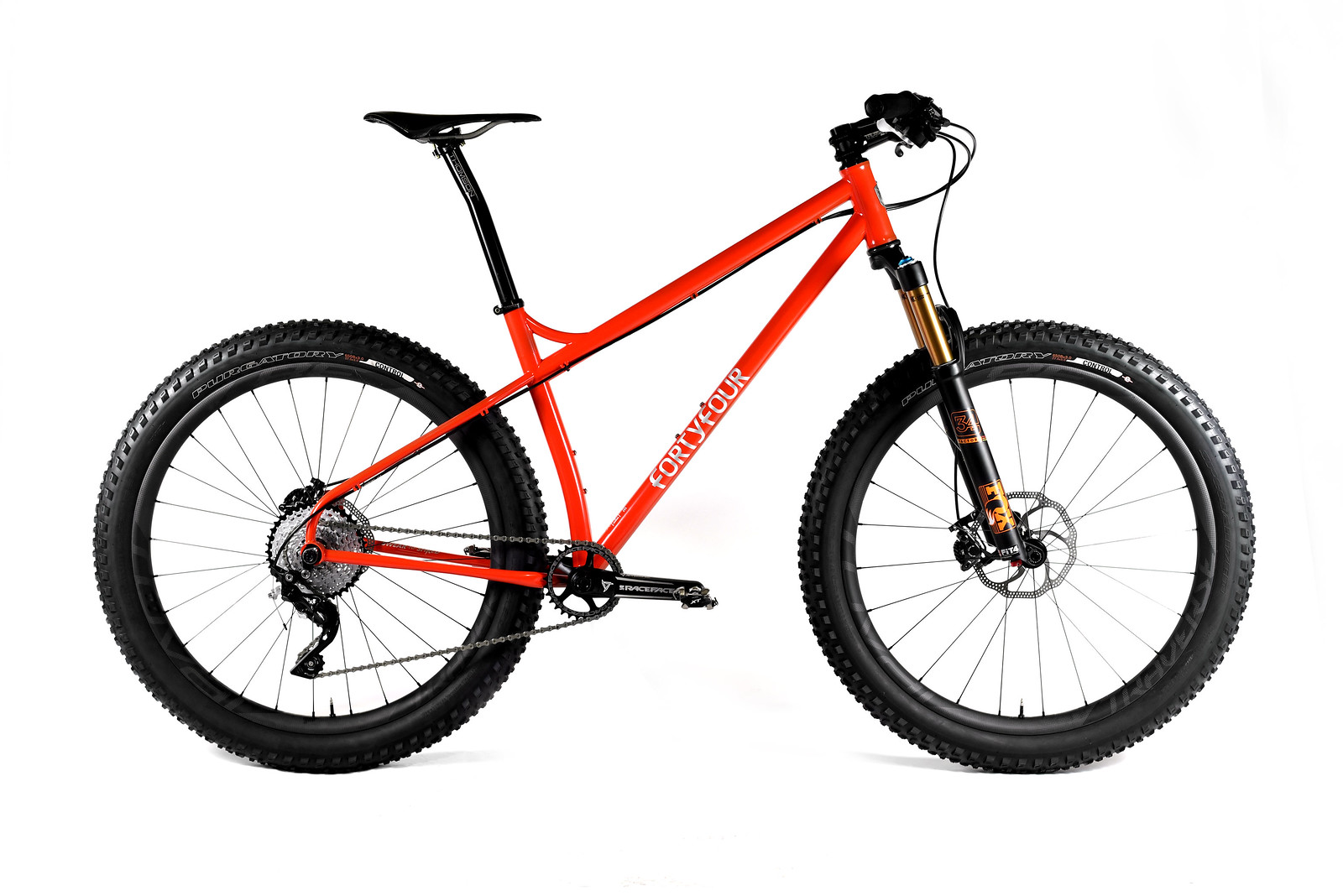 This past spring I got the call for a 27.5 Plus. The client made the trip up from Massachusetts for a morning of talking bikes, how he intended to ride, what his terrain was like and lucky for both of us: He was just about the same size as me so he was able to take my 1×11 out for a test spin. That helped to seal the deal. From these conversations, we settled on the spec and build. Originally, he was dead set on a 2×10 setup. I wasn’t sure about that due to the nature of the wheel size (and width) but said I’d take a really hard look at the numbers and check things in real time as I was building the frame to see just what kind of room we had down there around the chain stay / chain ring and tire region.

Well with a little back and forth, and with parts in hand there just is not enough room for a front derailleur. Well, actually there is but the chain stays become SO long that it basically takes all the attributes of handling that I’ve come to build into the bikes I build that makes them the bikes that I build and throws them out the window. And in all honesty, a 1x system just really opens up some possibilities when it comes to this tire size (or any Plus/Fat tire size for that matter). My own opinion on 1x set ups is that yes there is a compromise on your high end but when I’ve asked client after client who have a 2x or 3x set up just how often they are in the 11×42 or 12×38 or the whatever combination they have that’s big ring to little cog it’s always the same kind of scenario: “Well, there’s this road or there’s this hill on my typical loop where I go really fast and..” So basically they’re in it about .01% of the ride and oh btw, they’re running a 2x or 3x that has a granny with a 32 or 34t cog… So yeah. They need that set up with their current bike but this is a new bike we’re building here. AND the components that they’re investing in are lightyears ahead of what they’re currently riding. Most times. But the evolution of the mountain bike drive train has been about returning to some basics and only taking what you need out into the woods. There’s been a decided refinement of the drivetrain and it’s 1×11. It’s not for everyone and that’s why there’s still 2×11’s out there for those who live out there in those big mountain’s. But for most? 1×11 is the ticket.

However, the client was supplying the components on this one, and wanted some compatibility between other bikes so a 10 speed was a must. We decided on a 1×10 setup, 30t up front with room for a 32t flipped on a Race Face Cinch crank and for a little extra spin, I recommended Wolftooth’s 40t Giant Cog. The thing is that the clients part of MA gets a bit of snow. Not a lot but enough to think about a fat bike. The idea behind this build was to have a bike that he could ride Spring, Summer and Fall, but have that extra traction and a bit of float with a Plus sized set up for light to moderate trails with packed snow. The Race Face Cinch crank enables relatively quick and painless swaps of chainrings so he can run a 28 or even a 26t chainring which will allow him to gain some needed spin on slippery/snowy conditions. That’s the thing about fat bikes and snow: You need to be able to pedal with forward momentum but not too much power so you spin the tires. Too much power or too high of a chainring tooth count and you can break loose your traction. So that was the plan. 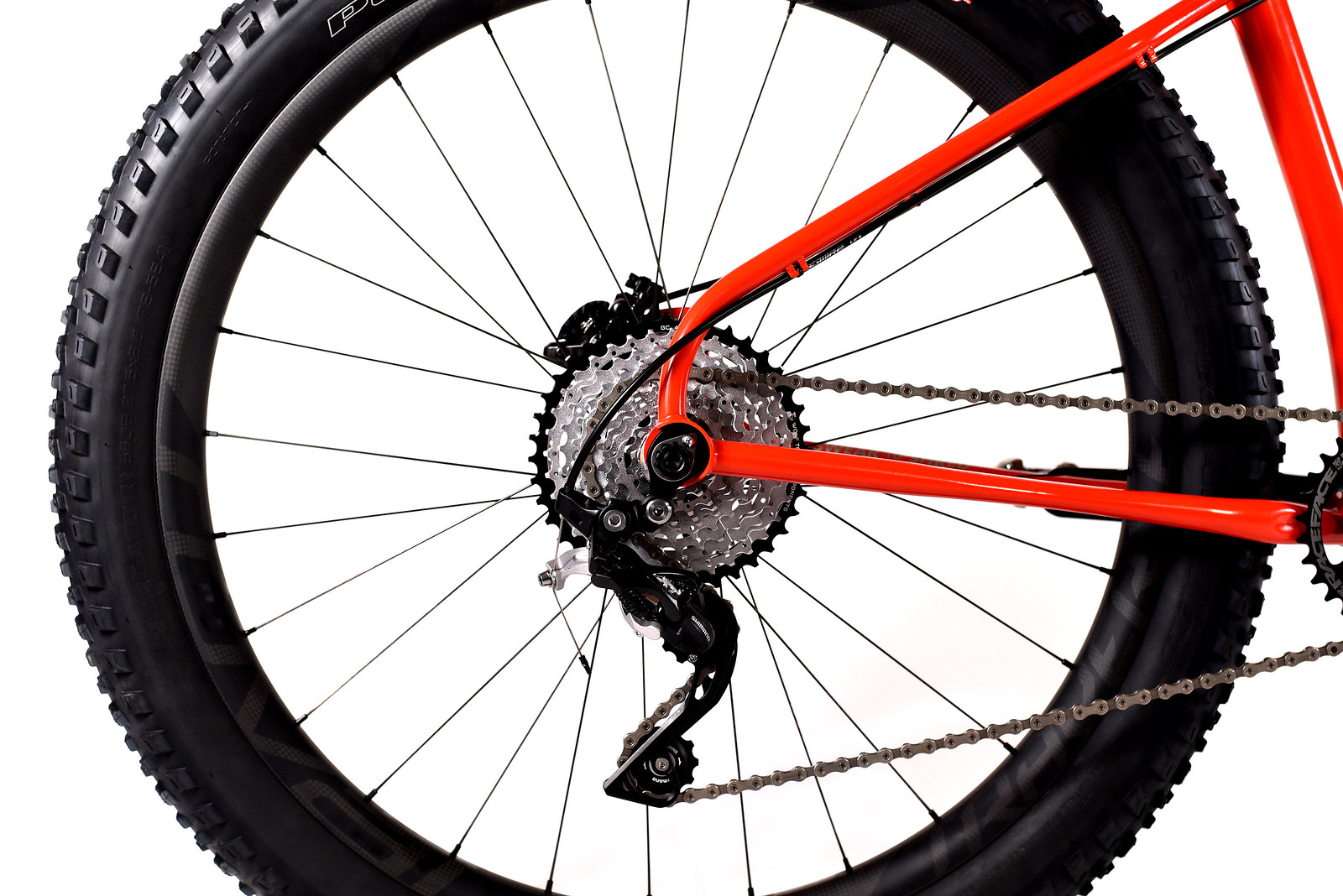 Geometry wise, this is a mountain bike with not too much slack / slow handling. More of a point and shoot geo with quick handling attributes. 70° head angle, 72° Seat Tube angle, BB Drop is “not too high, not too low”. Chain stay length comes in around 16.75″ (in hindsight, now that everything’s done I could have pushed that to a bout 16.5″ but things are TIGHT and I only have so much room to deal with. Clearances are still very good all the way around the tire. Tire choice is Specialized Purgatory’s and these are a full 3″ in width. They’re “YUGE”. These are mated up to a Boosted set of carbon hoops (client supplied from Sram). Fork is a Fox 34 Float, Boost 15mm TA. Now for those of you on the fence (Boost or Not Boost) between a 32mm or a 34mm? IMO: The extra bit of weight FAR exceeds the benefits and stiffness that the 34 has over the 32. But that’s only 2mm’s you may say. Well, those 2mm make a big difference. So much so I immediately replaced my 32 with a 34 and I built my new SS around it. So both my mountain bikes sport 34 Float’s. And that new FIT 4 Damper? Well… it’s got a literal sh!t ton of adjustability. I’ve heard some reports of some coming off a Terralogic and missing their Terralogic so if you like that Terralogic? Keep it. But for me, I tend to be the type that sets things up and then let’s it alone. I tend not to fiddle too much with my fork. Geometry and other set ups on the bike I do. Tires and tire pressure I do. Drivetrain refinement I fiddle with. But fork? For whatever reason I dial in air pressure, dial in rebound and then ride. Most of my ride quality is adjusted through tire pressure I think. If you are a fiddler, the new FIT4 has all that and more. But if you aren’t a fiddler, it seems to be a “set it and ride” type fork too. IMO: 120mm is the perfect trail travel. Not too much. Not too little. This is what we went with. 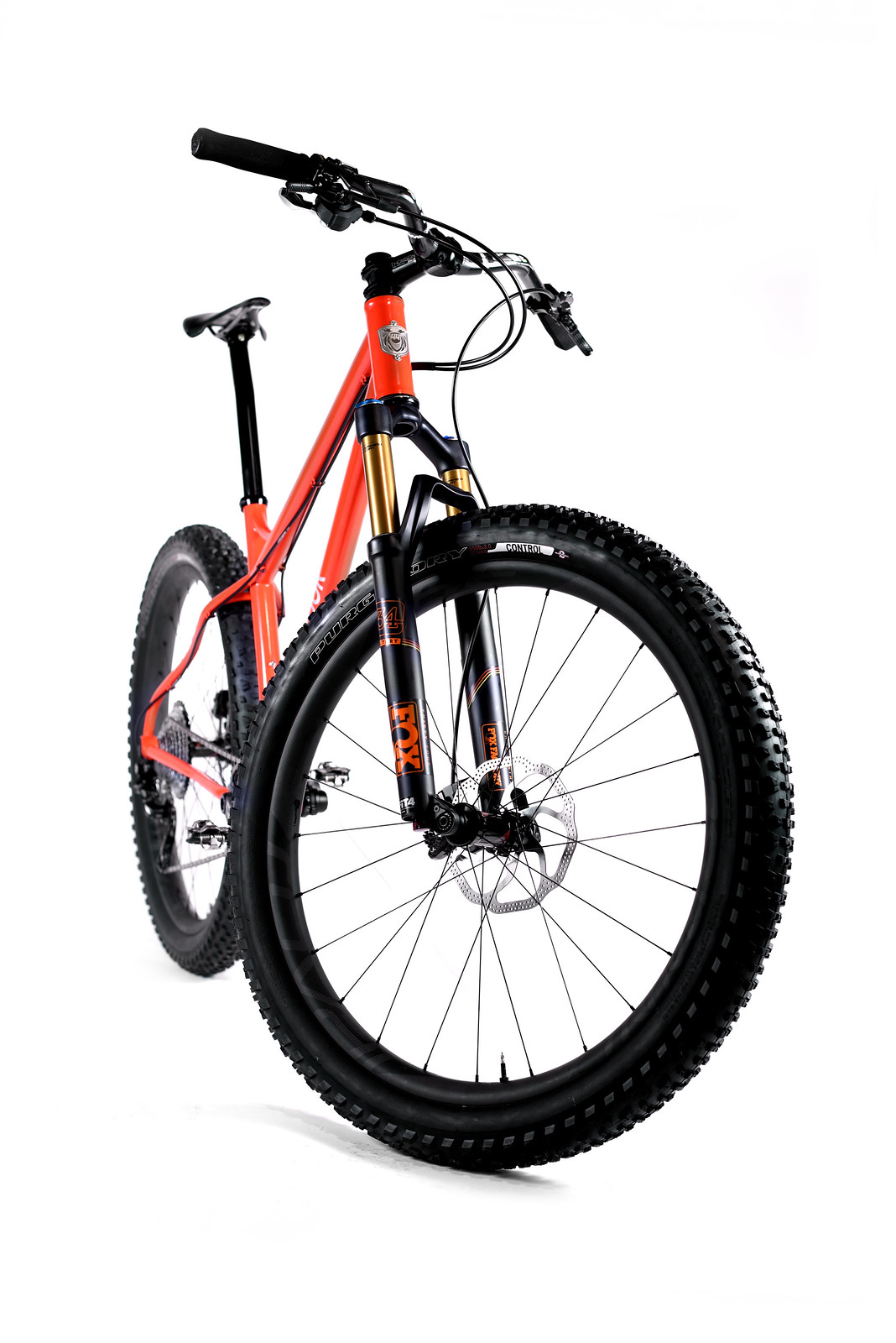 Cockpit sports a set of Answer PROTAPER® CARBON 720 ENDURO 20/20’s. These have 20mm of rise and 20° of back sweep. (I believe they can be flipped.) A client of mine has been running these on his fat bike in Switzerland and has good things to say. Brakes are Shimano XT M8000. I have to say that Shimano knocked it out of the park with XT M8000. If you need a new drivetrain and want to go 1×11… You cannot go wrong with this setup. The brakes kind of define what makes a mountain bike brake. Incredible power and modulation. Great ergonomics. Bleeding is a snap. Clean, compact design. And they’re black… Cane Creek 110. A no fuss and excellent headset. The cups have a little positioning “step” which actually helps pressing them. I really like this headset. (Another great option which is bullet proof is their 40 Series headset.)

Now for the photographs… I some times swap some parts if the client supplies. In this case I swapped a Moots Ti post for a Thomson set back, a San Marco saddle for that Selle Italia SLR and a Bontrager Carbon stem for a Thomson Elite. Why? Because I felt as though this sharped up the build a bit more for the photographs. And if I had my way, aside from the saddle, I would have liked to see this with a Thomson Post and Stem. Why? Because when it comes to these two components, no one make a better stem or a better more easily adjusted seat post. The Thomson Elite kind of set the standard for seat posts. I run these on all my bikes and I’ve been swapping some back to Thomson’s since ENVE changed their adjustment system on their seat posts. Their new system? I’m sorry guys but you made it more complicated. More parts. More finicky. More everything and it’s not for the better. What I loved about the older single bolt set up was that it was only a single bolt that adjusted everything. Torque settings needed to be adjusted but I appreciated it’s simplicity. IMO: Thomson still is king here once again. 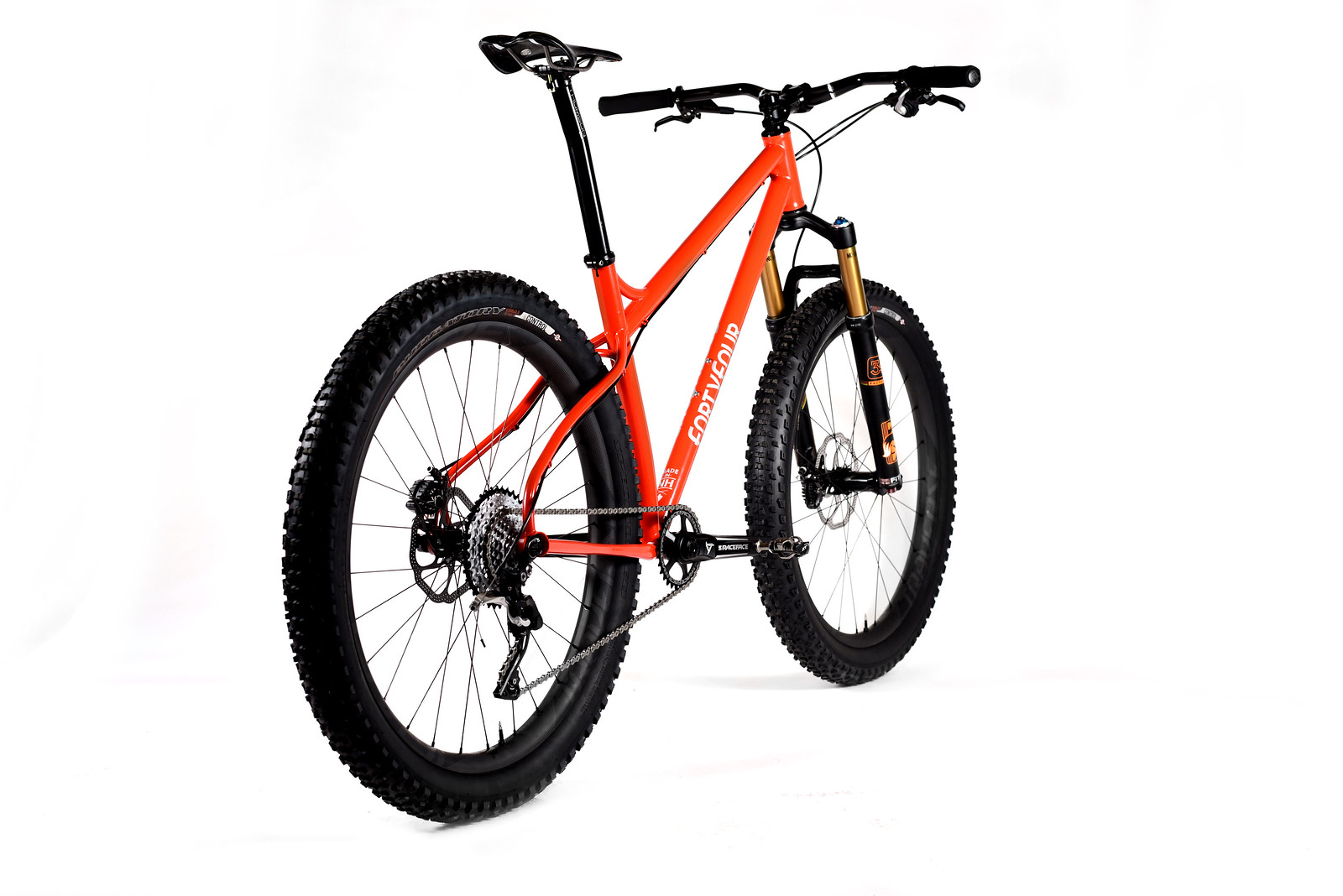 Pedals? Shimano XT! My only nitpick with these pedals is that actually the XTR versions release a bit easier. The cleat mechanisms on the XT’s are a bit on the sticky side and I believe the XTR’s have a different finish which actually makes entry/exit a bit easier. But if you want a pair of pedals that will last near a lifetime? You cannot go wrong with a set of Shimano SPD’s and the XT pedal is the “hot setup”.

Color is RAL 3020. I know. That’s red. But why does it look orange? Well my lights are Halogen and for whatever reason, no matter what I did that color just would not come out red. It bent towards the orange side and the camera kept “seeing” orange. I’ve been planning on upgrading my lights so until then you’ll have to take my word for it. Here’s a shot in natural light. Again… still looking orange for some reason! 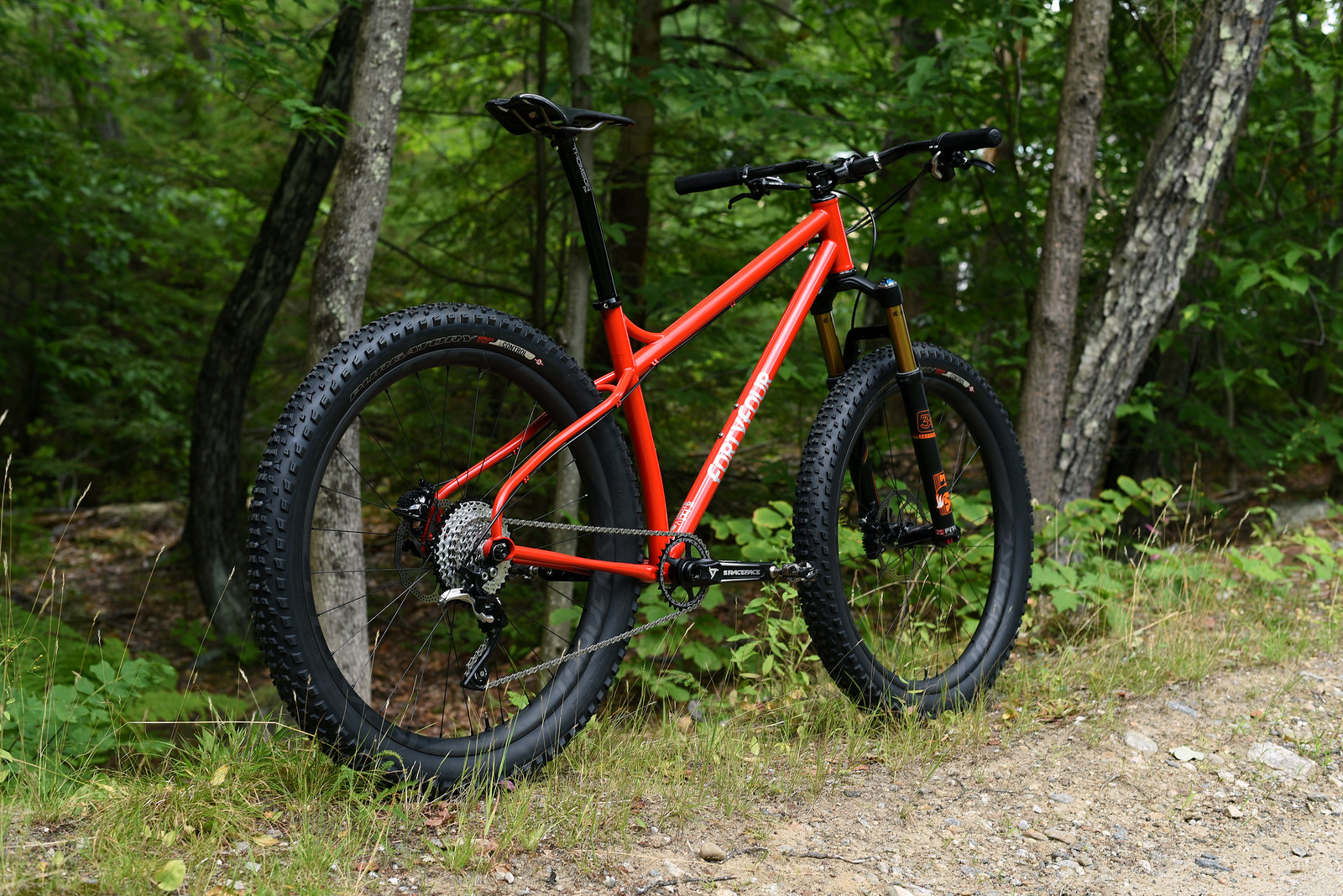 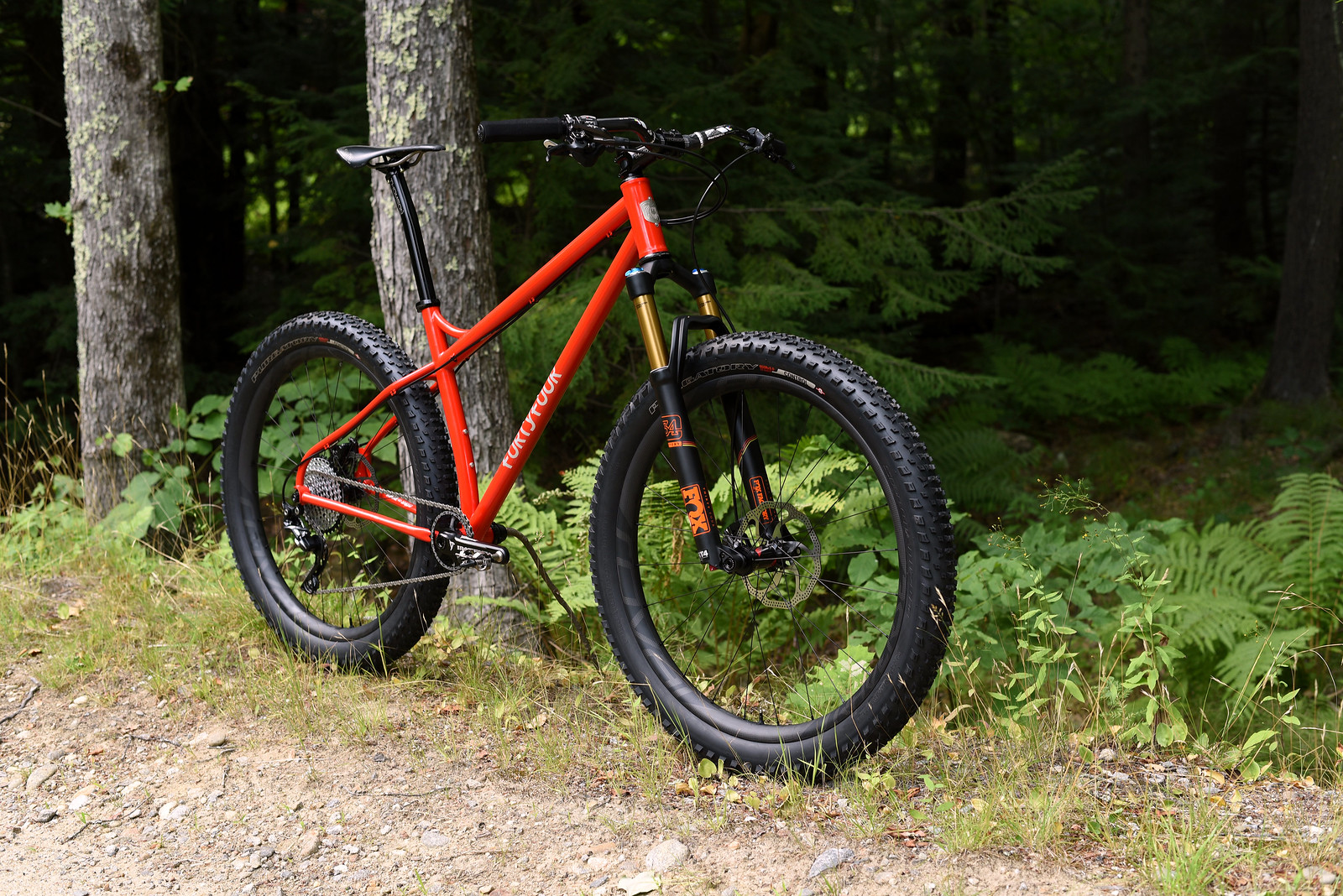 Client will most likely pick this one up some time this Saturday. Ironically, this is the first 27.5 Plus bike I’ve had the opportunity to build. No reason why I haven’t built one other than no one has requested one and all my personal bikes are 29″. Not to mention I’ve been investing in a different material… So to be continued on that note. Till then, hope everyone is out there shredding.